Until Wednesday morning the Friday snowfall event looked low-end and like another miss of a storm, however, some new data jumped in snowfall totals.

The jump came in a few models, but not all. The GFS (American) is pretty much holding steady with hit and miss areas of light to moderate snowfall.

Here's that model's output from midday Wednesday, which isn't too far off its "thought process" during the past several days. 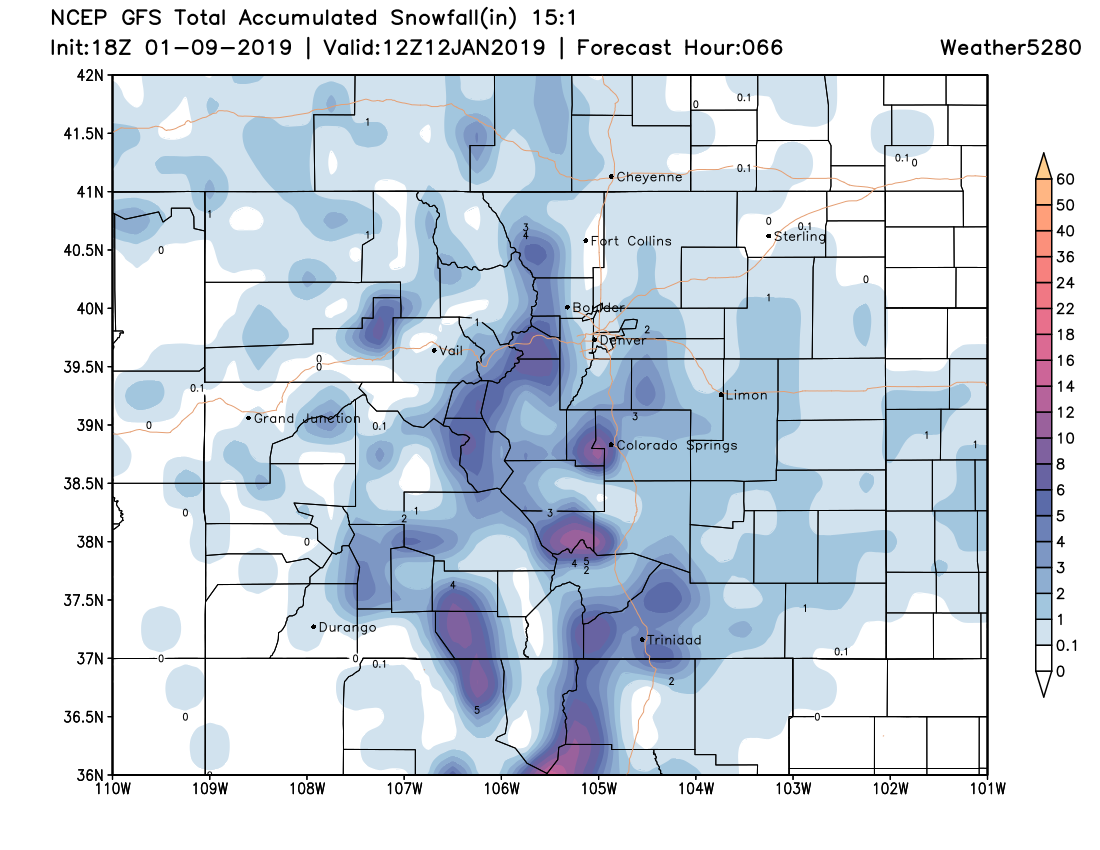 From this, we can see the mountain ranges and highest peaks favor the most, ie Pikes Peak which is represented in that little pink bullseye just outside of Colorado Springs. Other higher terrain areas that are likely to see some snowfall accumulation are the Raton Mesa across Southern Colorado and the Palmer Ridge between Denver and Colorado Springs.

The timing of the system is not much different in other modeling, however, the totals are as much as 4x this in another American model, the NAM. Here's a side-by-side, GFS on the left, NAM on the right: 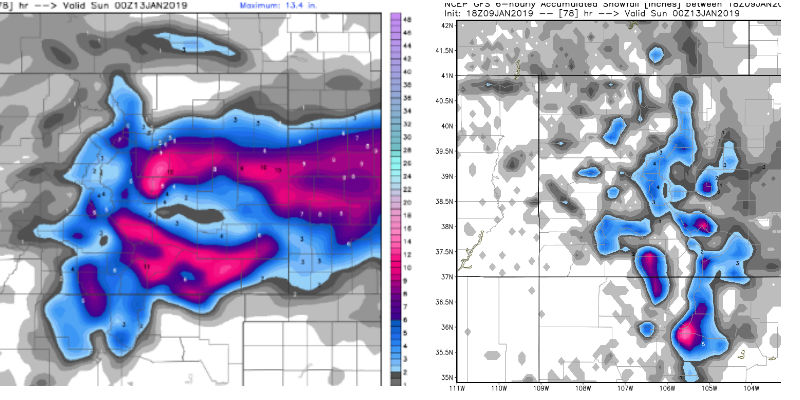 So, why the huge difference between these two American Models...?

Upslope: The setup indicates a relatively brief window for upslope flow (that's when the wind comes across the cities and up on the elevations which is a process that produces snow). Even the modeling with the high totals keeps a short window of time for the upslope to occur.

Moisture: Moisture coming in with this system is modeled to be over an inch of total water according to the highest model. That is a rather extreme amount of humidity to result in that kind of accumulation and doesn't match that model's own idea of how much humidity to send into the area. That model is assuming roughly the same amount of humidity as the others. With that said, we are looking at closer to what the GFS, above, has advertised and that's ballpark of 0 to 0.25 inches of water for the city and 0.1 to 0.5 inches for the elevated areas that we previously pointed out. Considering an average snow-ratio, we are looking at a 0 to a 3-inch range for the metro areas and a 1 to a 6-inch range for the higher populated spots, depending on exact elevation and slope. Totals on the peaks themselves could hit a foot plus as the snow-ratio, there could support those totals.

SHUTDOWN? With the Government shutdown, there is a notable error in our American modeling. The data these models bring in may or may not be accepted by the model because no human is ensuring what the models are considering (format changes) as a starting point. One would think that errors would be the same for both GFS and NAM but clearly, both are in two different games and the GFS has been at the back of the pack. With that said, however, the GFS is maintaining consistency and resembles the European model which hasn't had any shutdown issues...more on that model to come.

With these three bold topics, why is the NAM going with high-end snowfall totals? Likely sniffing something, or just meteorologically wrong. If sniffing and detecting an actual change in the weather setup, we will see that reflected in Thursday's modeling in more than just the NAM. We are inclined to lean toward the meteorological errors of the models at this point because the upslope isn't indicated to be that long and the moisture isn't that high to produce those foot-plus snowfall totals of the high snow producing models. Maybe this is a result of the shutdown, or just the models being models.

Due to image rights, I won't post anything from the European model on this public page. However, the European model is reflecting the same thoughts disclosed here regarding upslope and moisture availability. Plus, the European Center isn't on a shutdown. We have leaned mostly on the Euro for the following forecast thoughts and added in regional climatology/bias too.

A basis for the Denver Metro Area looks to fall upon these probabilities of specified snowfall totals represented on our Gambler Chart reflecting some snow, but higher end totals really trail off. 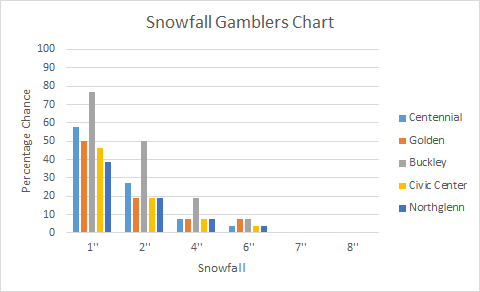 So, based on our hunches, what are we looking at for the city? Likely a 0 to 2" range around Denver, a 0-1 inch range for communities north and northeast of Denver, a 2-5" range for foothill and mountain locations as well as the Palmer Ridge. These ranges make the most sense based on available moisture, upslope duration, and temperatures.

Speaking of temperatures, we do cool off with this system - upper 30s to lower 40s - but not so cold we can see super high snow ratios as we did with the New Year's Eve snowfall event.

Timing Snow chances begin across the area from 11 pm Thursday to 5 am Friday. That chance is low but steadily grows through 11 am Friday (the likely peak time for snowfall in Denver) and begins to slowly decline until chances are wrapped up by 5 am Saturday, or so. That timeline may shift by 3 or so hours in either direction depending on the ultimate strength of the storm.

The ultimate strength of the storm is the remaining question at this point. Although, the strength has changed little up to this point, so if it remains the same again Thursday, you'll see us post your snowfall forecast using the ranges above.

Chat with you all tomorrow.