Nice seven day numbers for a good chunk of Northeast Colorado, with precipitation totals upwards of one inch for areas east of I-25 and north of I-70: 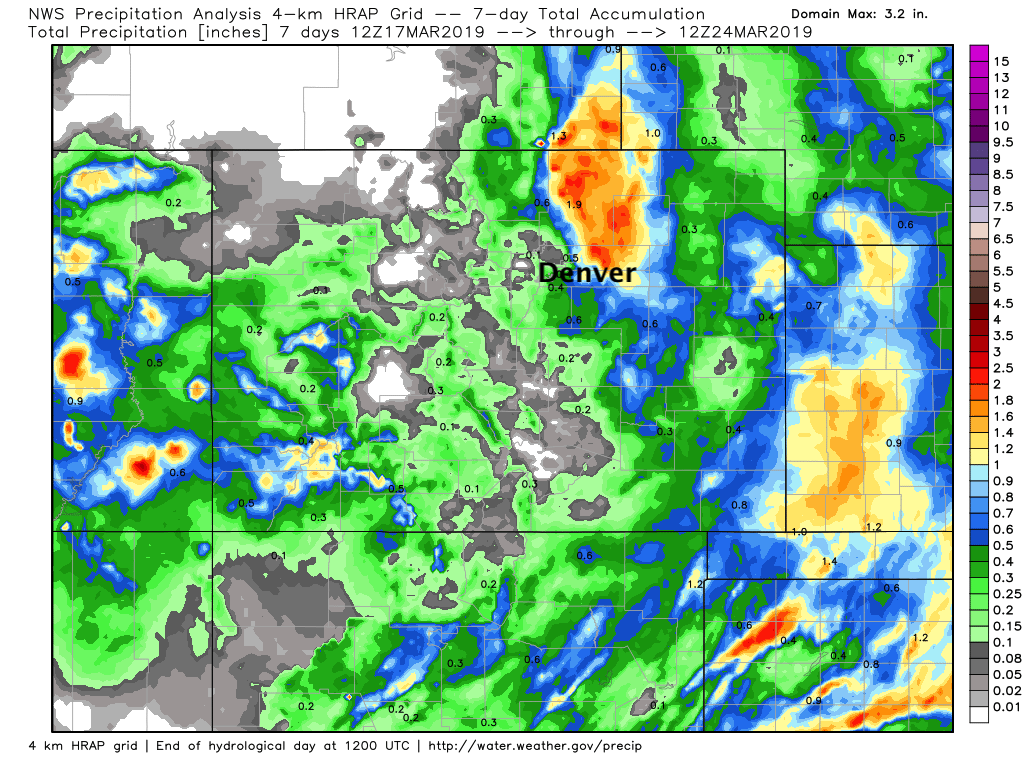 Friday's sneaky system delivered, with areas across the Palmer Divide, and points north between Strasburg and Fort Morgan picking up several inches of wet snow behind Friday's thunderstorms overnight into Saturday morning:

Friday also produced the state's first tornado of the year, with a landspout tornado near Eaton Friday evening:

Colorado's first of the year: Another look at the tornado Friday near Eaton (north of Greeley). This one from Nick Sadlo. The tornado did cause some damage to a dairy nearby. Ready for spring weather? It's here. pic.twitter.com/cxJxIED62f


The week ahead
The big story of the first half of the week will be the presence of a strong ridge over the region delivering the warmest temperatures of the year so far: 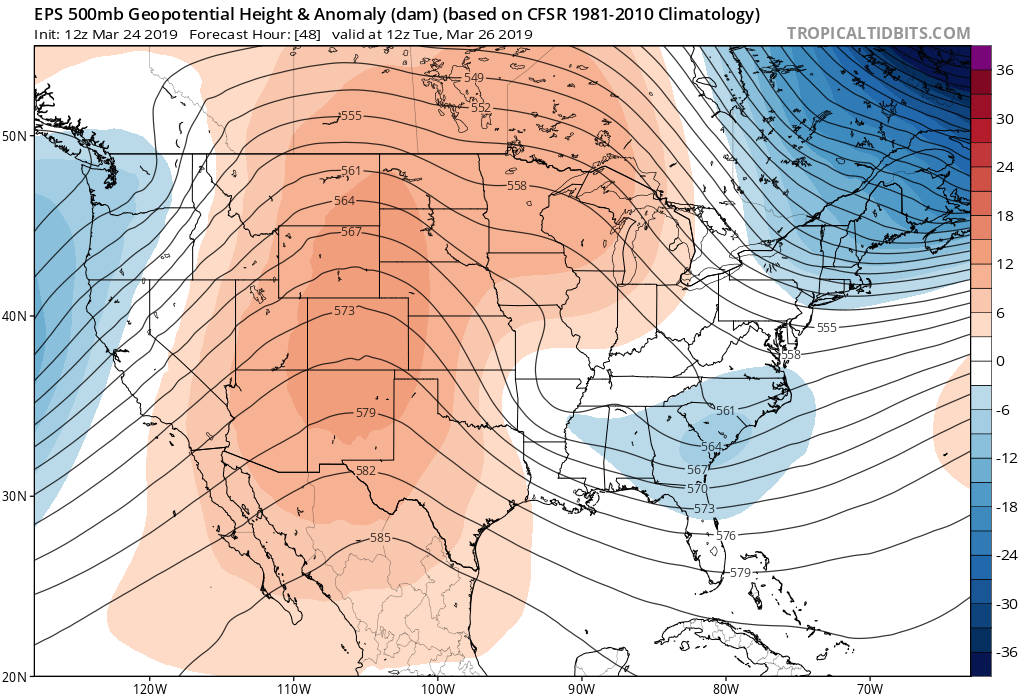 GFS MOS guidance has highs climbing into the low 70s Tuesday and mid 70s on Wednesday in Denver under that ridge, which (if true!) will be the first time since last October that the city will see 70+ degree weather. 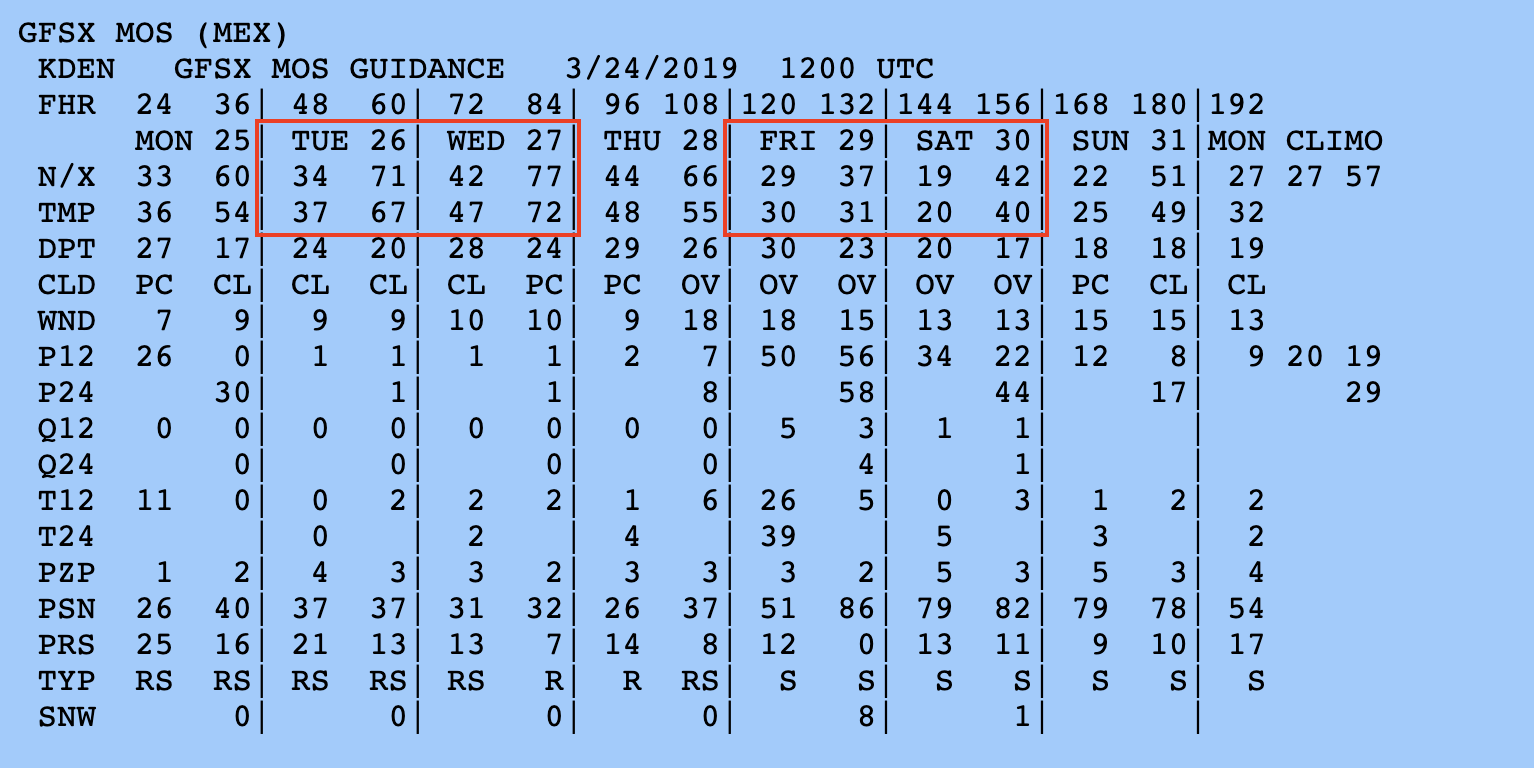 You'll notice in the image above that Friday and Saturday highs are forecast to drop quite a bit, with cooler weather forecast to end the month and start April. Not only cooler, but perhaps wetter, as we watch another storm system closely this coming week for its eventual impacts on the region.

A look at the GEFS temperature and precipitation forecast shows the week ahead nicely. Some storms around today, but a dry and warm first half of the week on tap. By Friday/Saturday we see good agreement between the various ensemble members that something will move through, and bring with it cooler temperatures and perhaps some wet weather: 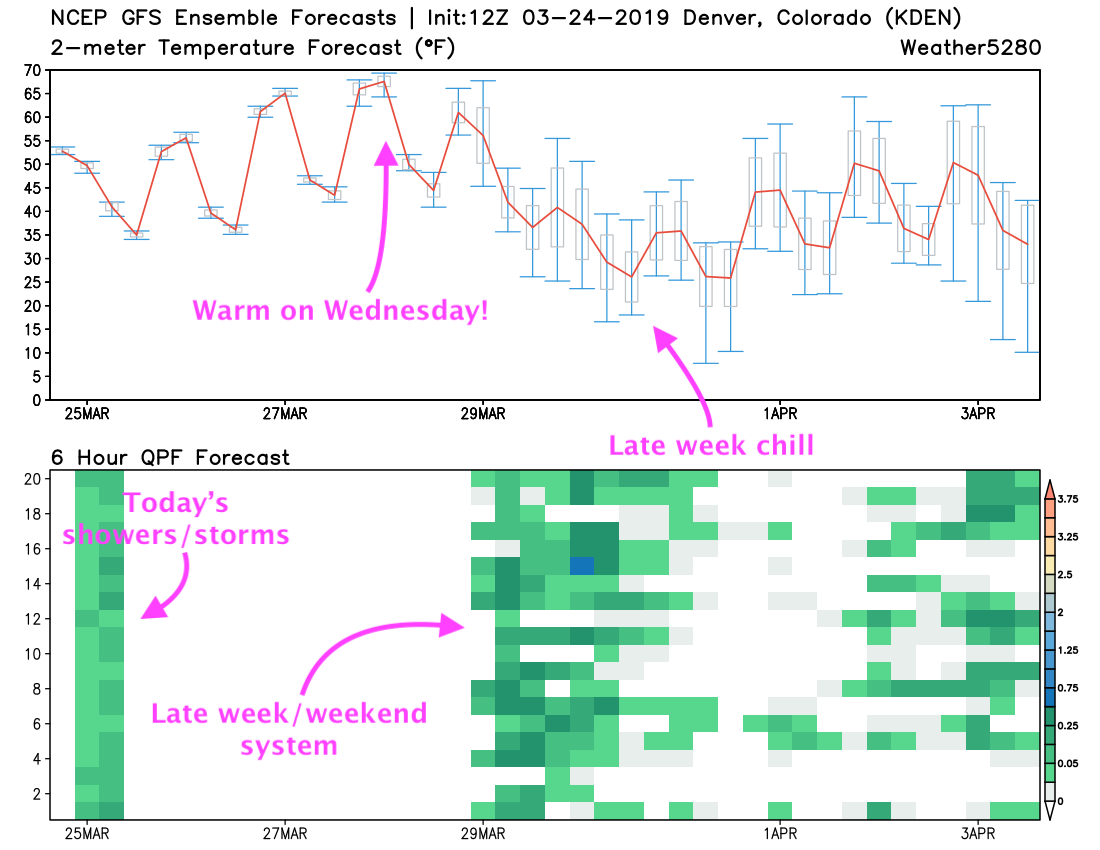 If you're eager for another good snow... this one's a big wait-and-see. It would certainly fit our outlook nicely, and as we saw yesterday storms this time of year need not be ignored... however, there's pretty low confidence at the moment with models varying greatly run-to-run, and little support overall from the Euro for snow (though it has had it at times).

At 500mb neither the GFS or Euro look all that remarkable for this time of year. Both have a cold front that looks decent, especially when compared to the early week warmth. The latest Euro ensemble mean shows the system, but strong isn't a word that comes to mind: 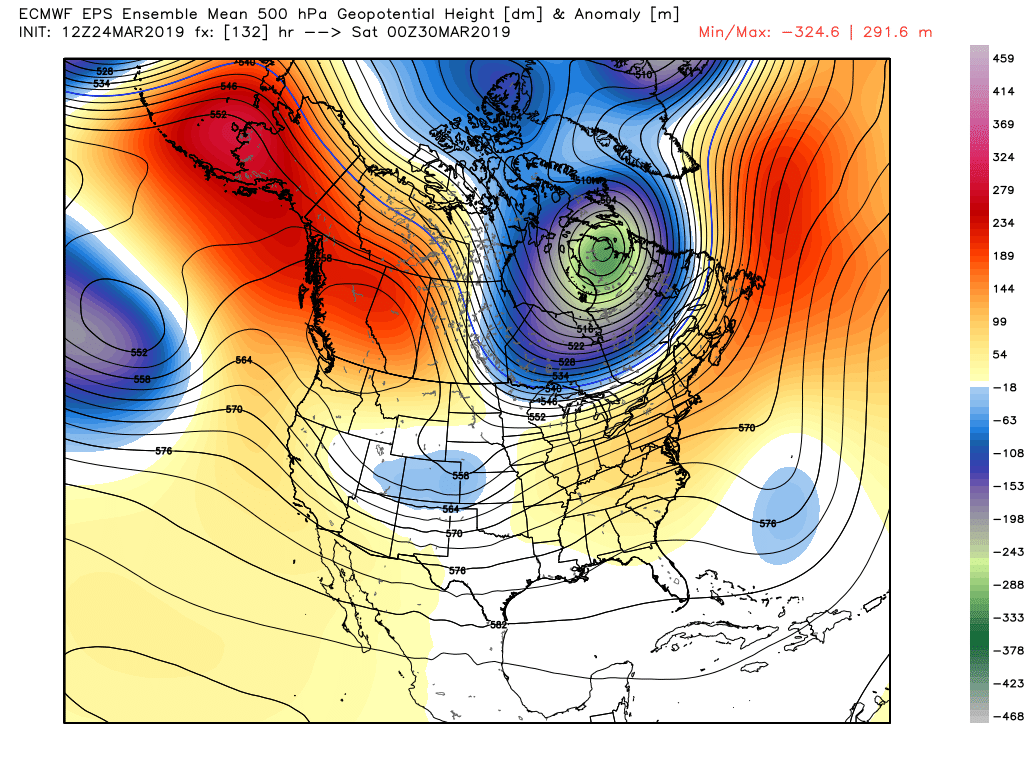 The GEFS looks a bit better, but still... 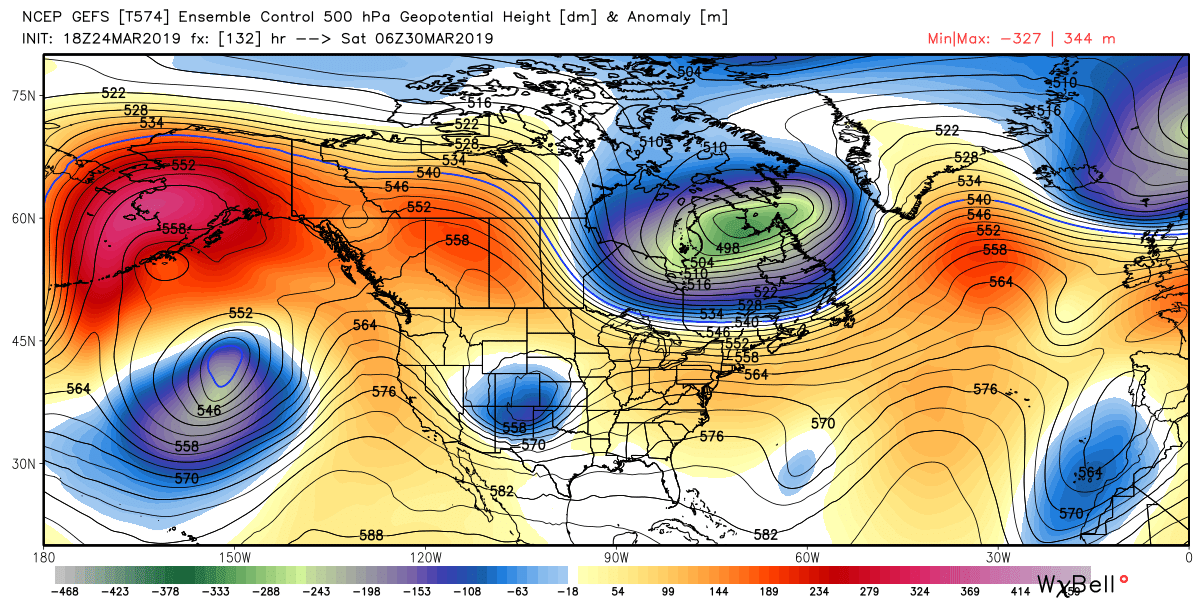 The Euro ensemble mean shows some snow around for Northeast Colorado: 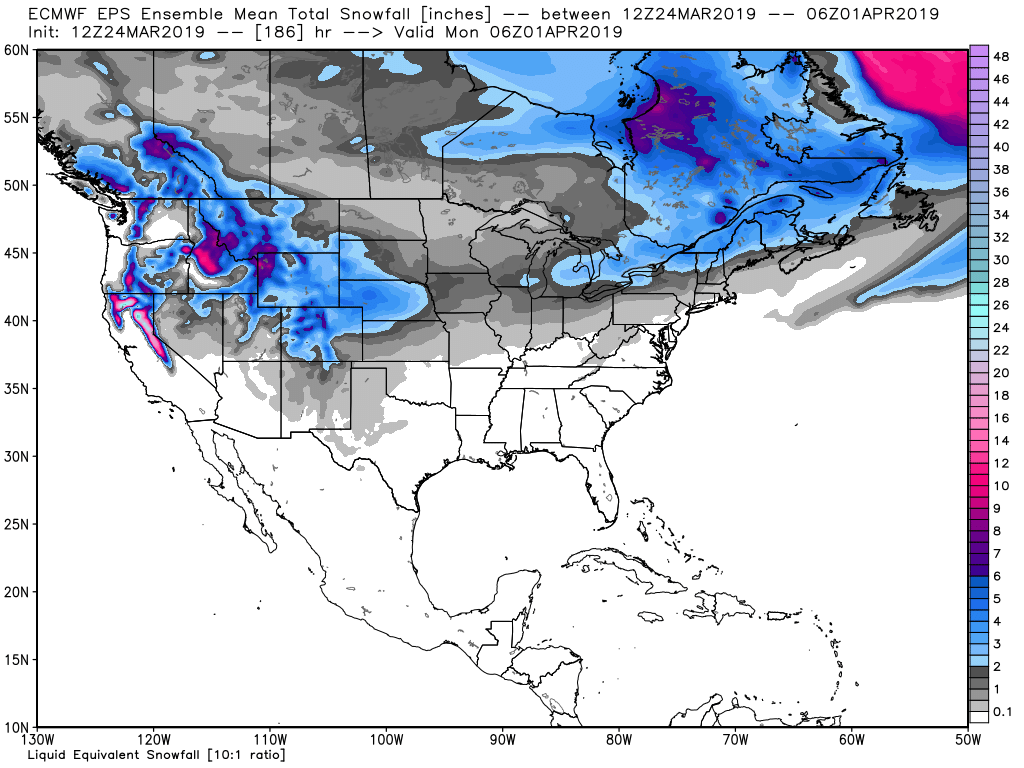 And more importantly some some above average precipitation totals for Northeast Colorado over the next seven days (most of that would come Friday - Sunday): 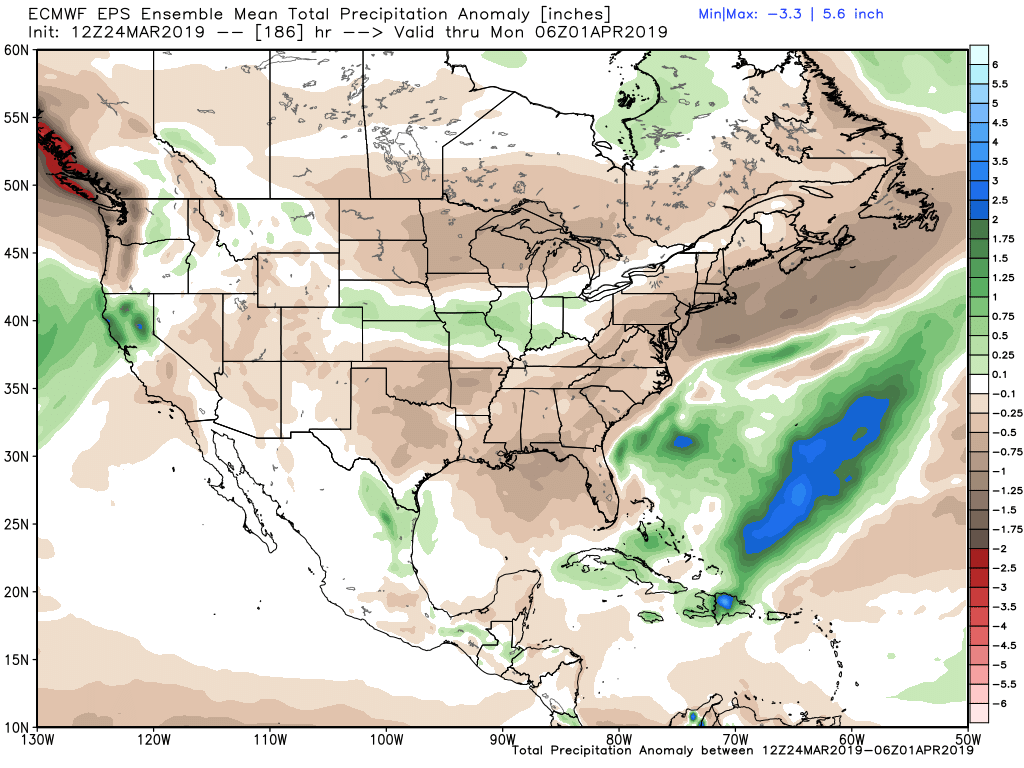 Again, quite a bit of uncertainty around the end of the week, with no good agreement on either the timing of the cold front Thursday (late or Friday), and if/where a stronger system moves in from the Pacific to help deliver widespread precipitation or if that system ends up elsewhere.

For now let's plan on a cool and unsettled last day or so of March, and perhaps a lingering chilly start to April. We'll go "unsettled" for next weekend until some consistency starts to show up in the modeling.

Best plan is to enjoy the WARMTH on the way to start this week, but keep one eye on the forecast for the end of the week. The 70s in Denver in March don't mean it's time to put the winter jacket around –– in fact often enough it means the opposite.