Every once and awhile my pessimism pays off. Yesterday's storms that hit to Denver's west and southeast were anything but high-based wind storms. After hitting 95°F at our station (now on the west side of Denver), we picked up an inch of rain Saturday evening in a mid-July storm that felt "a lot like the good old days" as it fired non-stop lightning and dumped torrential rain across the area.

Unfortunately, as the 24 hour rainfall total map below shows, the area impacted was relatively small. The immediate Denver area saw a good rain, as well as a cell over the far northern plains, and again through the Pikes Peak region. Otherwise, a pretty hot and dry day across the state on Saturday. 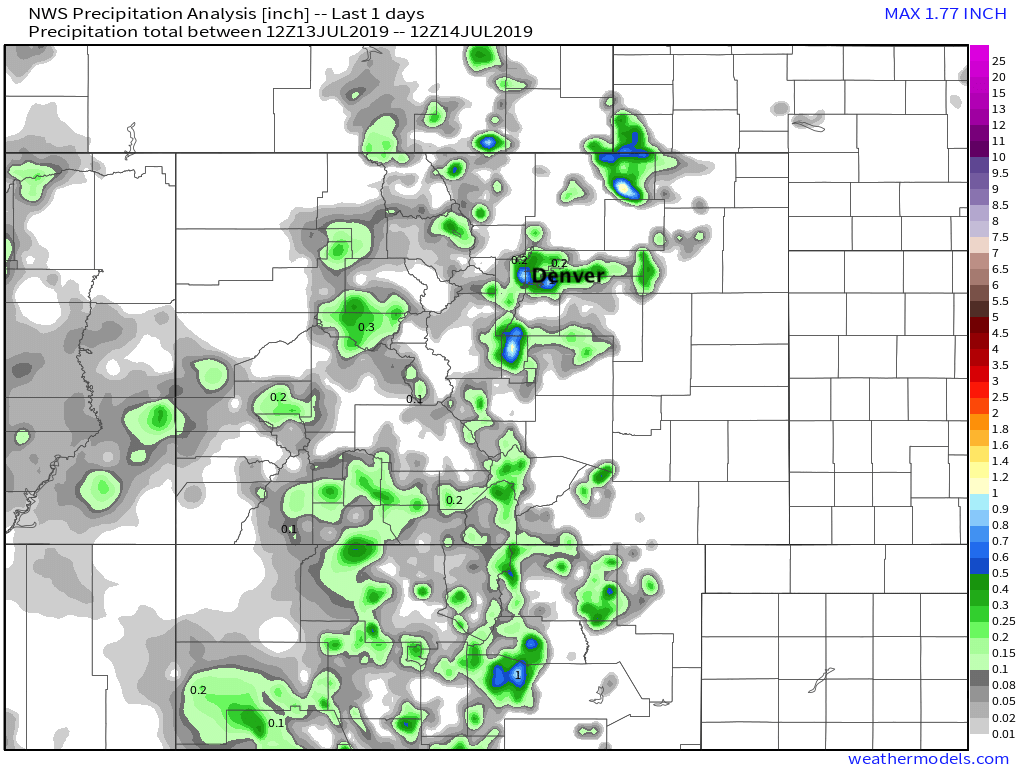 Today temperatures have been a little more forgiving across the metro area, but out east across the Plains we've seen temperatures climb back into the mid 90s again this afternoon: 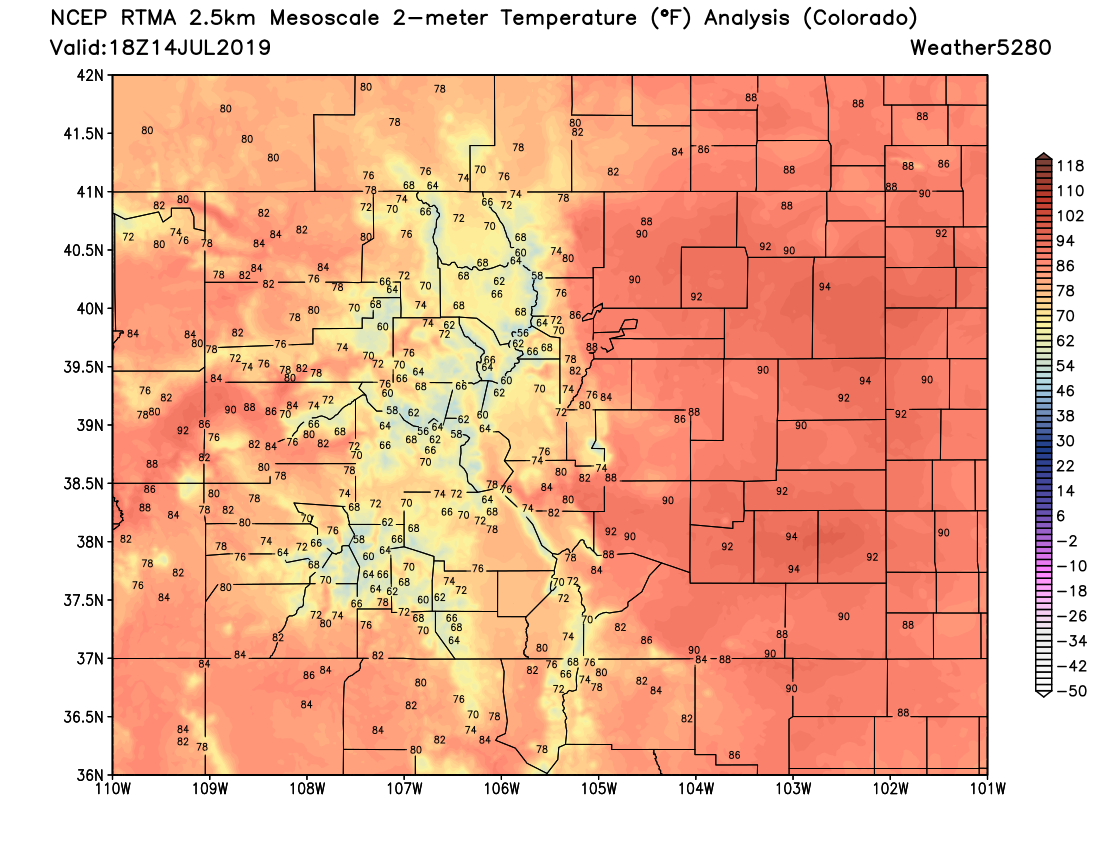 This afternoon and evening will again likely produce a few strong storms along the urban corridor. Some more of the wind variety, but perhaps some good (if even brief) downpours as well. Storm chances will be in the 40 to 50% range through the evening, with highs in the upper 80s to mid 90s depending on your exact location.

The week ahead
Much of the start the week. Hot with afternoon storms through Tuesday at least, before our storm chances may drop while the heat looks to continue through the end of the work week at least.

The GFS MOS guidance has highs in the 90s each of the next seven days for Denver, with mid to upper 90s looking possible (if not likely) by the latter half of the week. The latest update has the city approaching the 100 degree mark on Friday:

Those afternoon storms over the next several days will help somewhat with the heat, and at least help cool us down with some cloud cover late in the day. Later in the week as those chances decrease could lead to some real hot afternoon and evenings across Eastern Colorado.

If we look at the GEFS ensemble forecast for KDEN we see a warming (heating?) trend through the week, as well as a drying trend. Note the GFS isn't showing great rain chances over the next few days, but it wasn't yesterday either. Best storm chances are likely to be west of DIA as well. As we mentioned in our previous post, most medium range models show a cooling trend by late next weekend and into the following week, with an uptick in storm activity as well. Let us hope so, as we'll need some relief after this week: 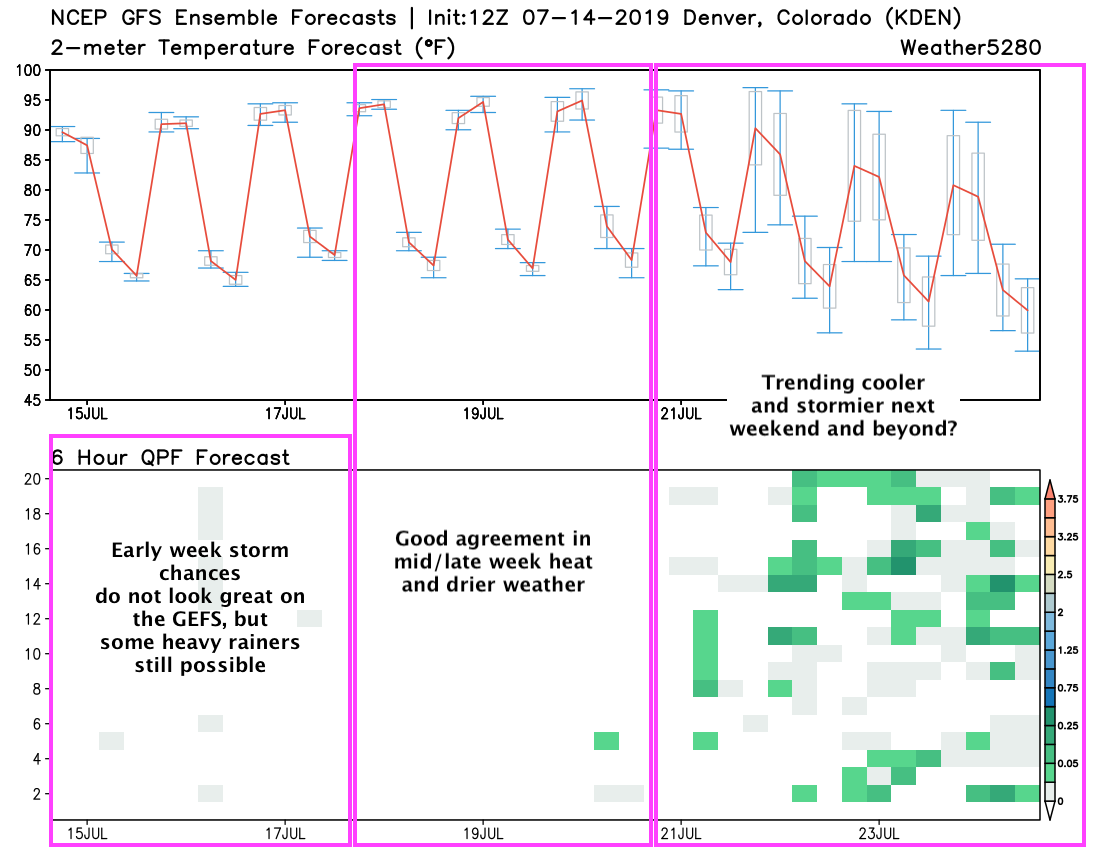 For Colorado Springs, a similar look. Storm chances are greater today and Monday, but drier and warmer by mid/late week, before a wetter pattern returns: 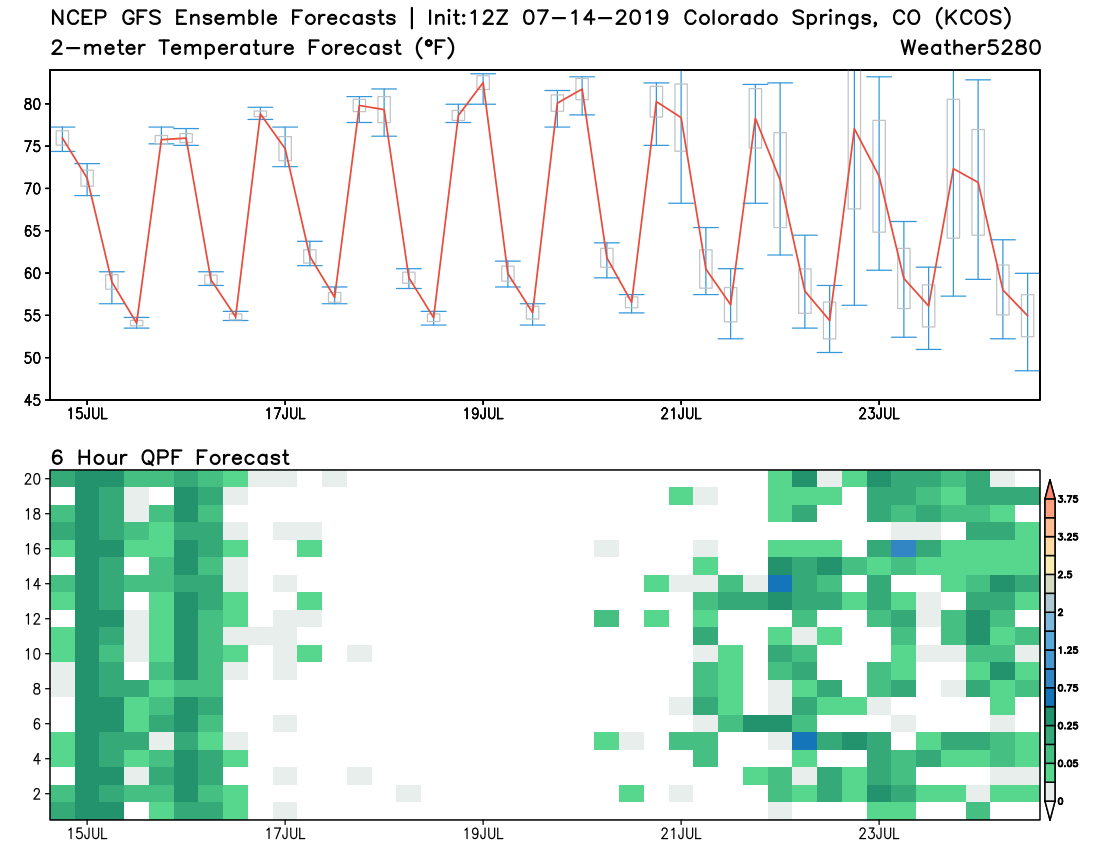 I'm feeling a little apprehensive about pushing the "wet and cool" narrative for the following week, but nearly all data suggests it will at least be cooler than this week, and wetter (on average) as well. If we look at the 5 day temperature anomaly forecast ending next weekend we see that temperatures will be well above average across the region, with big time heat for the Central Plains: 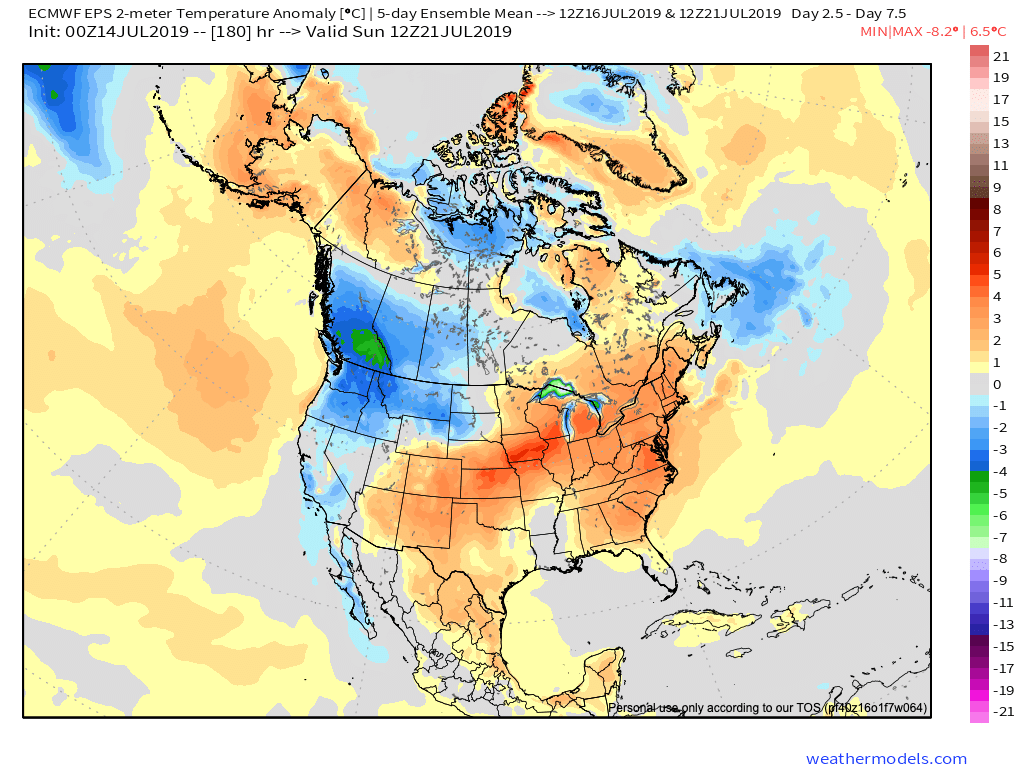 By the following weekend (last week of the month) we see those five day average relax a little, with near average temperatures forecast for Colorado, but still some warmth hanging on across the Central Plains: 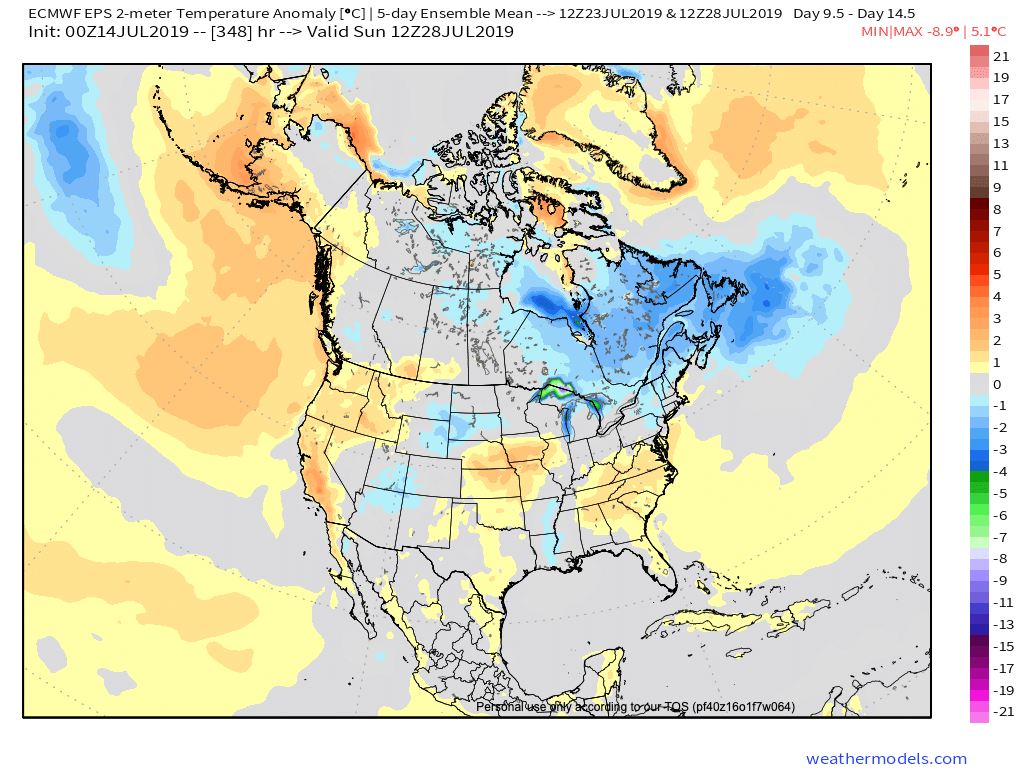 The European also insists on a wetter period for the last 10 days (likely more like seven) days of the month across Eastern Colorado, with some above average precipitation in its forecast after a dry week this week. This is in agreement with the GFS as we showed above, but ... is a long ways out. Let's get through the week and see how things are looking to wrap up the month. Perhaps a "near average temperatures and better rain chances" to end the month is a better narrative to push at this point. 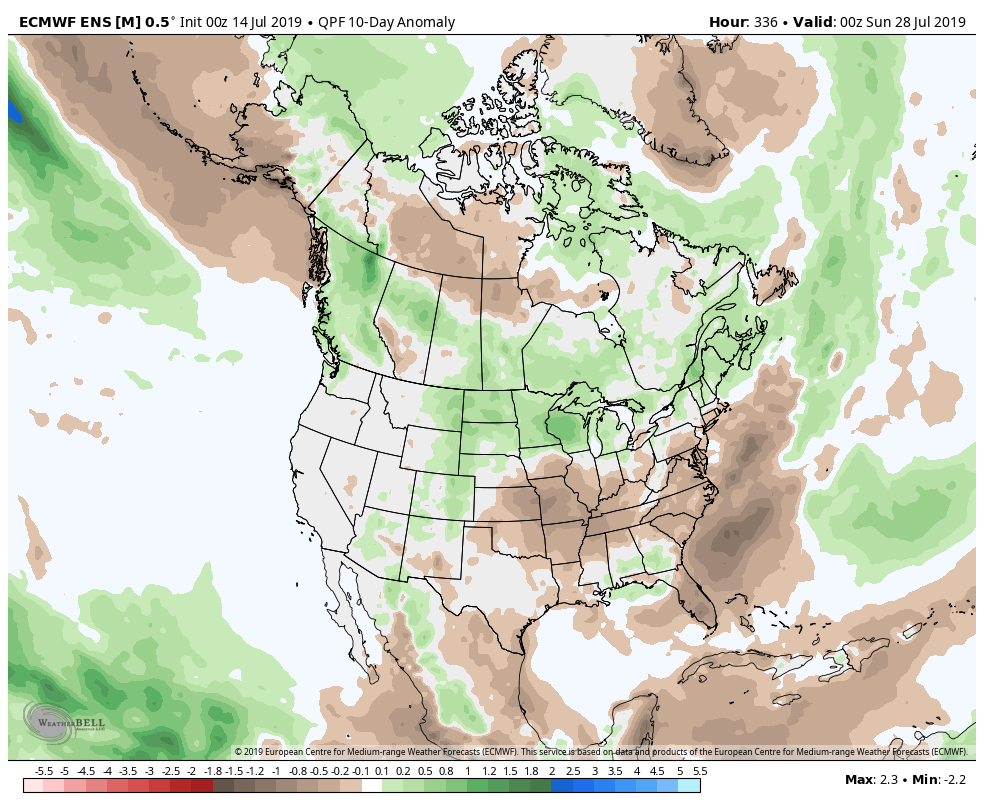