Matt Makens is a meteorologist on the Pinpoint Weather Team. He has nightly forecasts on Colorado's Own Channel 2.

In the monsoon post from earlier this week, I tossed the idea of a delayed start to the monsoon and that idea seems more likely with global models latching onto something during early August that can bring monsoonal moisture to all/most of Colorado (so far, areas in SC CO have been only possible benefit of establishing monsoon).

No, I'm still not calling these recent storms in and around the northern Front Range "monsoonal" as the seasonal wind flow has yet to bring the deep moisture into the area. The strong tap of tropical moisture has been into southern and western Arizona as well as southern California and Nevada. (Shown here in the orange and red shades):

That moisture has dried by the time is reached Colorado on the northwesterly storm flow the state has been under.

A switch to a southern or southwestern storm flow will be able to grab that surplus of tropical moisture. We are beginning to see that potential shift in global modeling.

I'll start by showing you the American GFS model. This comparison depicts the wind flow of the middle atmosphere Monday morning the 29th to that of August 11th. Note the centralized clockwise pattern near the Four Corners will shift east over time based on this particular model. (It has been trying to do this from run to run with increased consistency). 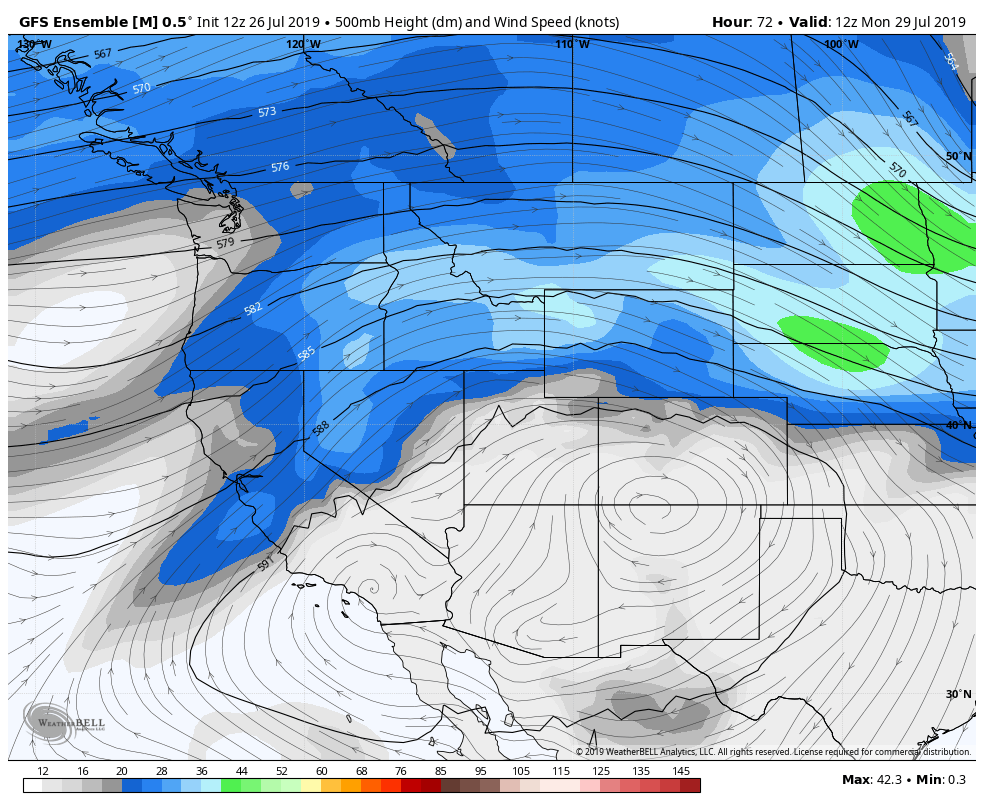 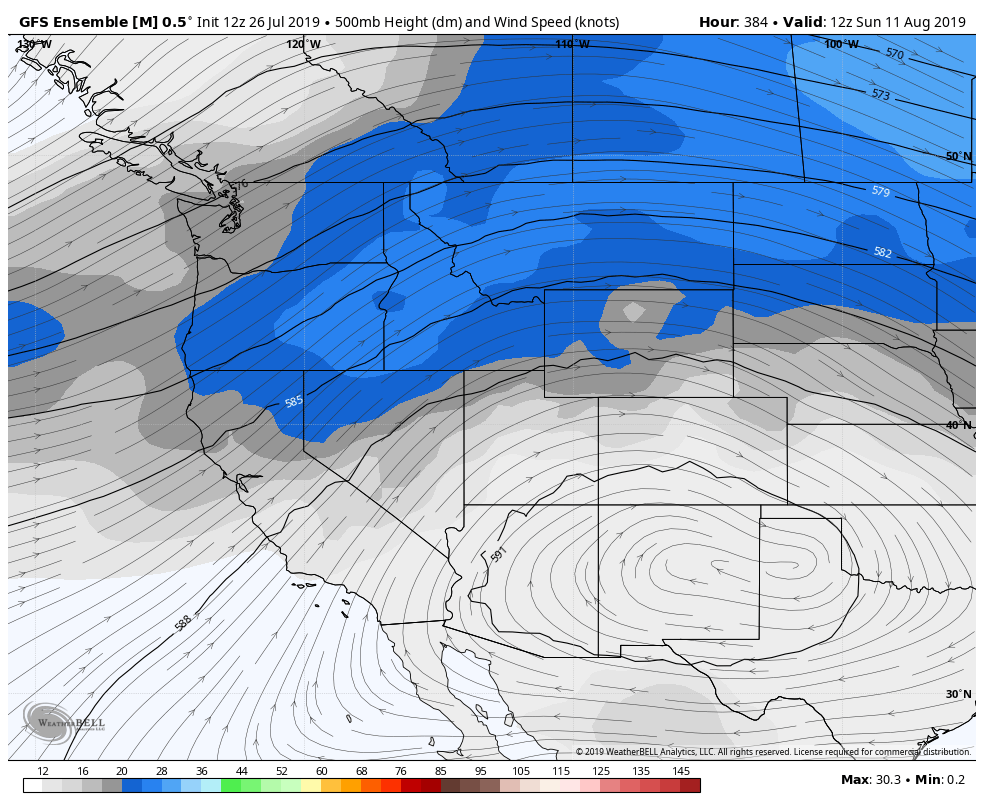 The closer that circulation centers itself nearer Texas, the wind flow over Colorado becomes more southwesterly and the state can begin to tap into the surplus in tropical moisture as mentioned above.

Should this pan out, then the monsoon flow may establish itself to be of rainfall benefit to Colorado (again, as discussed in the previous post).

This will be a significant outcome for Colorado as we've seen dismal rainfall to date in July across much of the state and the return of abnormally dry conditions to the drought monitor across Southwest Colorado: 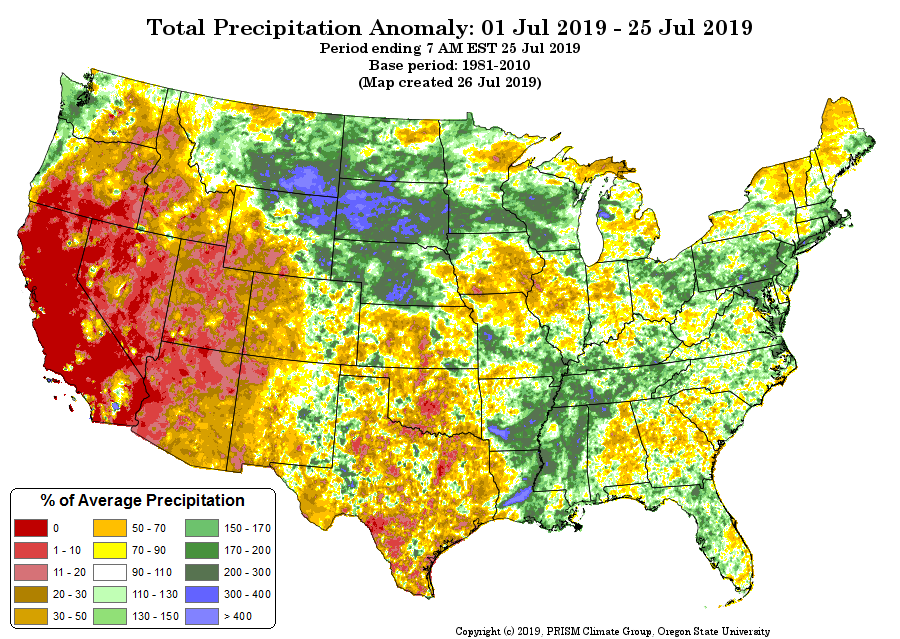 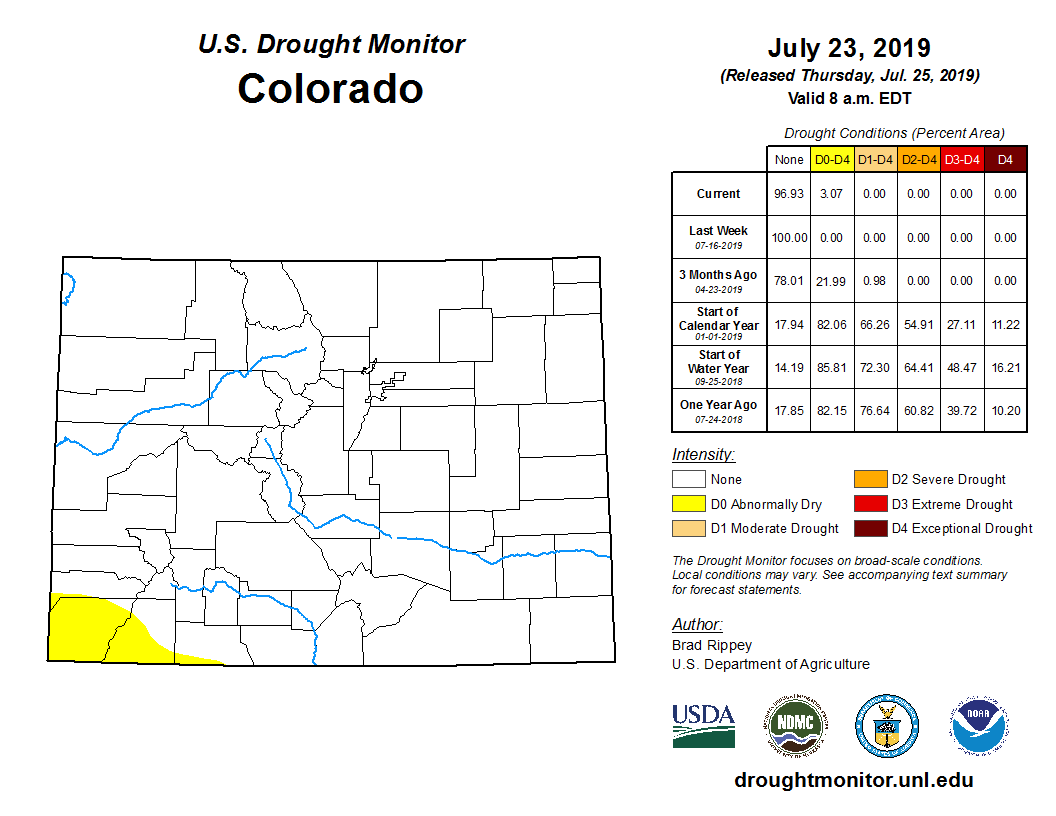 So, when/if the pattern does establish the monsoon for Colorado we will see above-normal weekly rainfall projections for the first time in over a month. I'm using the starting point of this transition - the 8th of August - to show you this weekly precipitation anomaly map. 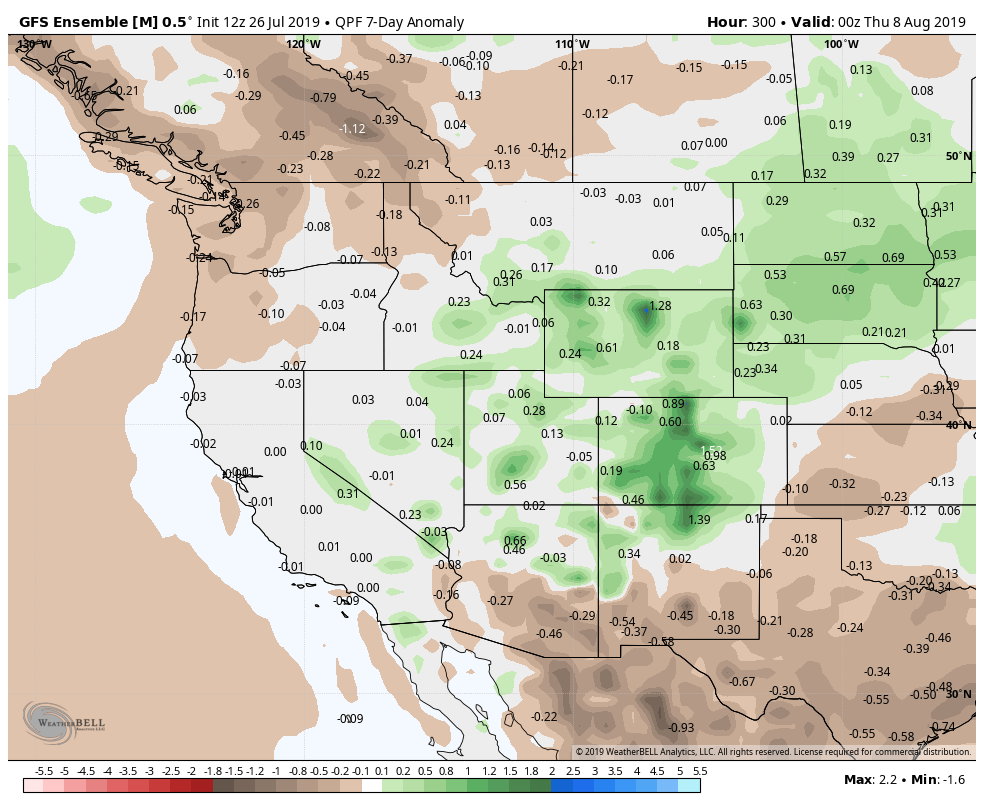 Starting around the 6,7,8th of August we may see the pattern become wetter for a period of time, perhaps a bit sooner depending on what model you look at.

It should be noted that at the same time drier than average conditions are projected over Mexico, Arizona, and Southern New Mexico. Since these are 'source regions' for the tap of tropical moisture, you can see our concern for a lasting impact should the weather turn wetter for early August.

European modeling is similar enough to the American model shown here, which is giving me a growing confidence in at least a temporary period of wetter than average conditions due to the monsoon in parts of early to mid-August.

Beyond that point, we will have to monitor the moisture tap. If the northern Gulf of California, Mexico, and Arizona fail to see extended periods of tropical moisture, we will only see a brief monsoon impact this year.

Since monsoon should classically be defined as a seasonal change, if we don't see a seasonal adjustment to the dryness of this summer it'll be difficult to claim the monsoon even arrived.

Something to watch unfold –– with fingers crossed, that is!