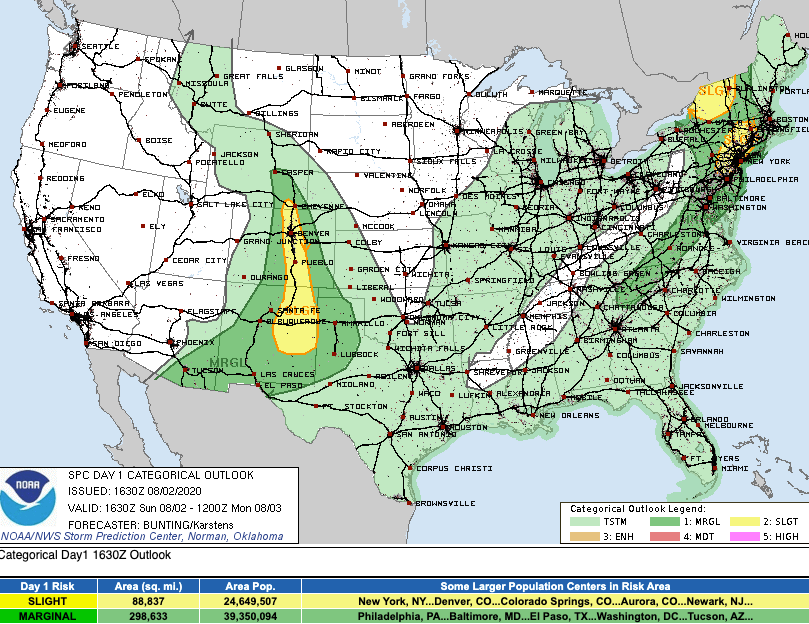 Not much new to report as we head into the final month of meteorological summer. This summer has been overwhelming hot and dry across the region, with few exceptions to that rule in recent weeks.

The first week of August isn't likely to be much different in either regard, though the forecast will feature daily storm chances along the Front Range this coming week, so perhaps a few locations will get lucky with some beneficial moisture.

Temperatures will be near average, so this could be worse as well, but average temperatures for the first week of August are still quite warm around here. Today marks the first day the average high in Denver starts its annual decline from 90°F yesterday, to 89°F today, all the way down to 42°F by mid December.

In the outlook below we see temperatures in Denver expected to bounce around from the upper 80s to low 90s over the next week. This will put the us near average for the period, or perhaps slightly above.

Meanwhile, the large-scale precipitation outlook is a dismal one. While daily storm chances are likely to mean some areas fare better than indicated below – on the whole, the pattern remains a dry one. The European ensemble mean continues to paint below average precipitation across all of the Four Corners region over the next 7 days, a far call from its once overly optimistic outlook from some weeks back. You'll also note the blues and greens across the Eastern Seaboard, showing the expected track of now tropical storm Isaias in the coming days.

Here is the latest advisory from the Hurricane Center on Isaias:

Below average precipitation doesn't necessarily mean no precipitation. And it certainly doesn't mean we won't see any storms. What it does mean is that we aren't likely to make any dent in our precipitation deficit in the coming week, at least not at a regional level.

Storms that develop later this afternoon along the urban corridor will have the potential to be quite strong, with the primary severe threat being hail, and the possibly to produce damaging hail as well. As you can see in the image below, the SPC shows a thin strip of severe weather potential right along the Front Range later this afternoon, so something to be on the lookout for.

A Severe Thunderstorm Watch is in effect through 9pm for the areas in blue below, with the primary threat from the SPC being outlined as storms capable of producing "very large hail":

As of early afternoon no storms have developed, but a few echos are starting to show up across the Front Range mountains. Storms will gradually develop as the afternoon progresses, and eventually push off the foothills and across the urban corridor by late afternoon or early evening. The HRRR (below) shows the best window for storms up and down the I-25 corridor coming between 3pm and 7pm, before storms eventually push east of our area and onto the Plains this evening.

We'll see how it all shakes out, but don't be caught off guard! A good afternoon to have those cars in the garage if possible, as a few of these storms are likely to produce some large hail.

The chance of storms sticks with us in the planner, so there's at least some hope a few of us buck the European outlook shown above. It's not likely, however, that we finish the week above average in the precipitation on the whole, but instead a far more isolated haves vs plentiful have-nots in the coming days.

We've got a La Niña update on the way for our Insiders so be on the lookout for that, as well as a post looking a bit further down the road this month.

Happy August everyone, be safe.