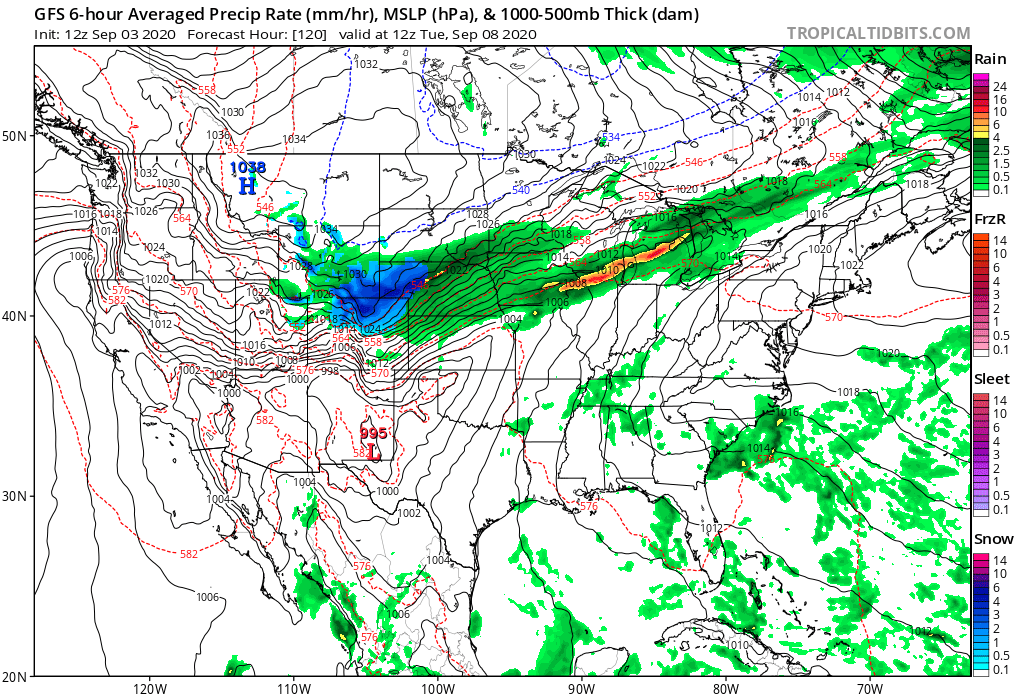 We hope everyone is ready for quite the weather rollercoaster over the next seven days, as temperatures will climb into the upper 90s this weekend along the urban corridor, only to crash into the 30s and 40s early next week.

Temperatures
For Denver, Cheyenne, and Colorado Springs, daily record highs are in jeopardy of being broken this weekend. GFS MOS guidances has a high of 98°F on Saturday and 103°F on Sunday before bottoming out at 36°F early Wednesday morning. We'll hedge a few degrees cooler on Sunday with our forecast, but it won't matter much – this weekend will be HOT, by first week of September standards or otherwise. Here's a look at temperature departures from record highs across the region, currently showing Denver tying its record high Saturday and Sunday:

A large ridge of high pressure in place across the west will help drive the extreme heat across the region. California is once again bracing for excessive heat this holiday weekend, with heat warnings and advisories up across the state.

Monday we begin to see a large shift in the weather take place as a strong trough digs into the Northern Rockies and drops south Monday afternoon and night:

With this trough will come the coldest air we've seen in some months and a dramatic change to our weather across Eastern Colorado.

Another way to visualize this is with our GEFS ensemble forecast graphic. The red line in the chart on top (below) indicates the mean ensemble temperature forecast. Take a look at the huge drop after the warm weekend:

While this will be a dramatic drop in temperatures, it likely won't be a record though it could end up somewhere high on the list. We're expecting about a 50-degree drop between Monday afternoon and Tuesday morning, with about a 58-degree drop from the high on Sunday. For a single day temperature drop the record is a 66-degree drop, set in 1872. For 2-day drops the record is 76-degrees, when the temperature fell from 58°F to -18°F over two days in December of 2008.

Still, it'll be a dramatic drop, especially considering where we will be starting from, and not all that dissimilar to the drop we saw last October, when the temperature fell from a high of 83°F to 28°F behind a similarly sharp front.

Precipitation
The cold front is a done deal. In true Colorado form, it'll be dramatic.

The bigger question is how much and what type of precipitation we are likely to see. Models haven't been in great agreement here, but today the trend from the drier models has been with a wetter solution, and not the other way around.

Here's a look at our precipitation probabilities (available for Insiders here) for the next 10 days as of midday Thursday. A notable bump in chances as we head into early next week, and for those that have been following along, a more convincing look than a day or two ago.

The European has been most aggressive with rain and snow with this system, especially its operational runs. The ensemble mean has been less so, but today we see it too coming in wetter and colder. Below is its mean precipitation forecast, showing nearly an inch of liquid for the Front Range foothills and I-25 urban corridor. The GEFS is similar.

It ultimately will come down to how much the low digs, and how long it hangs around. The trend today has been toward the Euro, which has been trying to dive it into the Four Corners region and slow its progression down, vs what has been a faster more progressive outlook from the GFS.

IF the low takes a more favorable track for a greater precipitation event, it likely increases our odds at seeing snow at lower elevations. As it stands, we think the foothills have a good chance at seeing their first accumulating snow of the season, and odds perhaps increasing for some snow down low as well.

Quite a bit of reservation still on how much potential the lower elevations have for any meaningful snow. It's been hot. REAL hot. Temperatures will be dramatically colder than where we are now – but not epic cold, especially for any precipitation that falls during the day. Still, some hints that accumulating snow cannot be ruled out next week, and with that here are our gamblers:

The next couple of days will just be a waiting and watching game. How will the data trend with the evolution of the trough. A day ago we really believed the drier solutions were the most realistic, today it's at least more clear how we could end up with a wetter (and whiter?) event.

Impacts
As for impacts, right now we will stress the colder temperatures and wait a few days to get an idea on how much of a concern the snow potential will be or not. Obviously a snow this time of year is concerning for many reasons, including what impact it would have on our trees and ultimately the power grid (not good). If you have entered or considering entering our First Snowfall Prediction Contest you also have a personal stake in this!

It's just far too early to have any confidence in the snow potential, and even with some rather bullish models out there... it seems like there's a much higher chance they are (way?) overdone than not. If the low comes through as open/progressive system snow will be a non-factor, if it closes off to our west we could have an early season snow on our hands, even at lower elevations.

As for the cold, the greatest impact will be the dramatic change for most of us. There of course is the concern with the potential for temperatures to drop below freezing. Right now it looks like the greatest odds of that happening are confined to the higher elevations of the Rockies, but it's not to be slept on either. Should this system come in a bit stronger, and perhaps even if it ends up wetter, we'll really need to watch those morning lows for sensitive vegetation across the region. Here's a look at probabilities temperatures drop to or below 32-degrees Wednesday morning:

For now, get out and enjoy the last hot hot HOT weekend of the summer, but keep an eye on early next week as big changes are on the way!