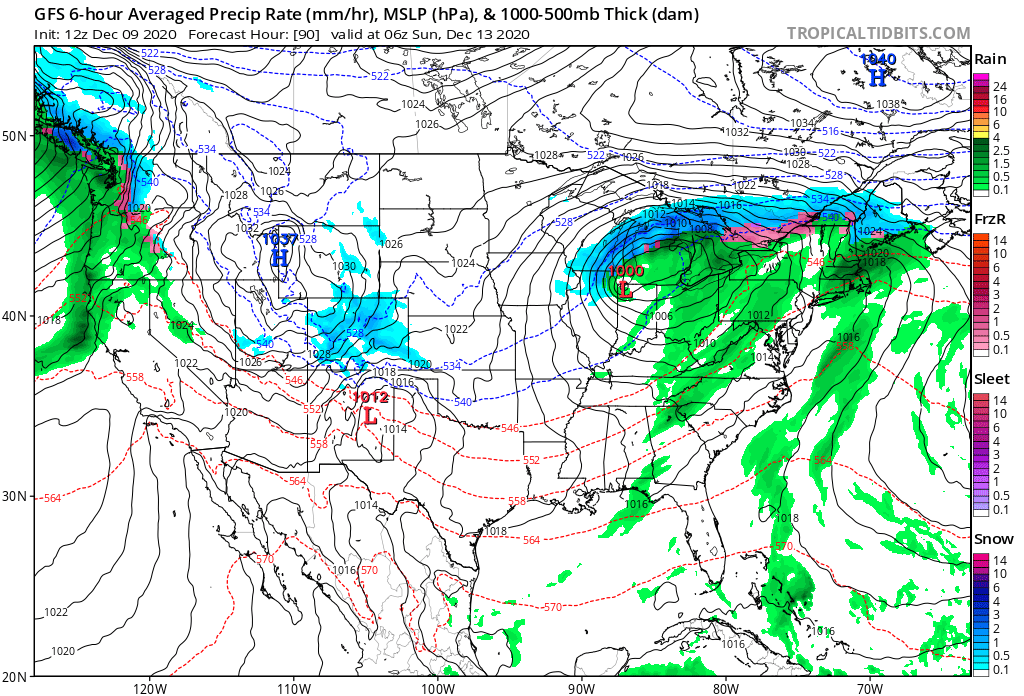 December warmth to give way to much colder temperatures, a chance of snow to end the week across Colorado

We've been tracking changes in our weather for some time now, set to arrive Thursday and carry with us through the weekend. While a good amount of uncertainty remains in the forecast, chillier temperatures and at least some snow for most of us looks likely.

The biggest question is around how much snow we are likely to see. The snow chances come in two waves, both with upsides and downsides for potential, and both with plenty of differences between the models. In all, look for the chance of snow to increase Thursday PM along the Front Range, and stick with us off and on through Saturday night.

Temperatures will drop about 20 degrees Thursday, with highs in the 40s forecast for Denver. Much colder air filters in Thursday night, and will keep the metro areas at or below freezing through Saturday, before warming a bit by Sunday as things look right now.

Snow chatter
The snow chances come in two waves. The initial wave will be Thursday evening through Friday, the second Saturday and Saturday night.

The first looks generally like a light snow event, and one that may not pan out for everyone. Modeling, generally speaking, keeps the lightest totals north of the Palmer Divide with the first system (shows a bit more upslope potential for the Colorado Springs area, especially the higher terrain west of town), with perhaps a better chance for snow across the greater Denver area with wave two should some of the stronger solutions verify. A lot of uncertainty remains with the second system, and if some of the modeled snowfall output is realistic given the setup.

A look at the GEFS precipitation forecast shows the two chances quite well. The first a prolonged light snow event, the second with higher uncertainty (bigger differences between each of the 30 ensemble members), but a short duration on Saturday:

Even with the uncertainty, it seems like the potential for a few inches between Thursday night and Friday and again Saturday and Saturday night are possible for most locations from Pueblo north to the state line. Higher elevations (generally west) of I-25 will be favored for the greatest totals with this setup, with generally lighter totals east.

For now we'll focus a bit more on the first round – where a Trace to 3" of snow will be the most likely outlook for all the cities (Colorado Springs, Denver, Loveland, Fort Collins), with perhaps areas of 3 - 6" in the Front Range foothills and mountains.

Probabilities
Our gamblers aren't all in just yet on the high-end potential shown in some of the data this morning, and this aligns with our thinking. Plenty of bust potential here, and again uncertainty especially as we head into the weekend and the second wave.

Still, some trailing high-end probabilities show the uncertainty and potential for greater totals by Sunday. The greatest probabilities for most locations are in the 1 - 4" range when all is said and done.

The Euro is a bit more bullish, generally speaking, and so not surprisingly shows a bit higher probabilities for some – especially given these are calculated at a 10:1 snowfall/liquid ratio, and we should be higher than that for most of the duration of both events. Its latest ensemble mean probabilities for 3" of snow or more is high for higher elevations west of I-25 across northern Colorado, and in the 60%+ range for the western Palmer and Colorado Springs area as well. For those along and east of I-25 in Denver and north, the odds from this model remain much lower for the 3"+ totals:

Plenty of time yet to see how things may unfold. Best to plan on the change to chillier weather starting tomorrow, and the chance of snow off and on Thursday PM through Saturday without worrying too much about the details for who gets exactly how much. Generally a light snow event, but for Denver IF there's to be a boom that looks more likely Saturday than with the initial wave. We'll see.