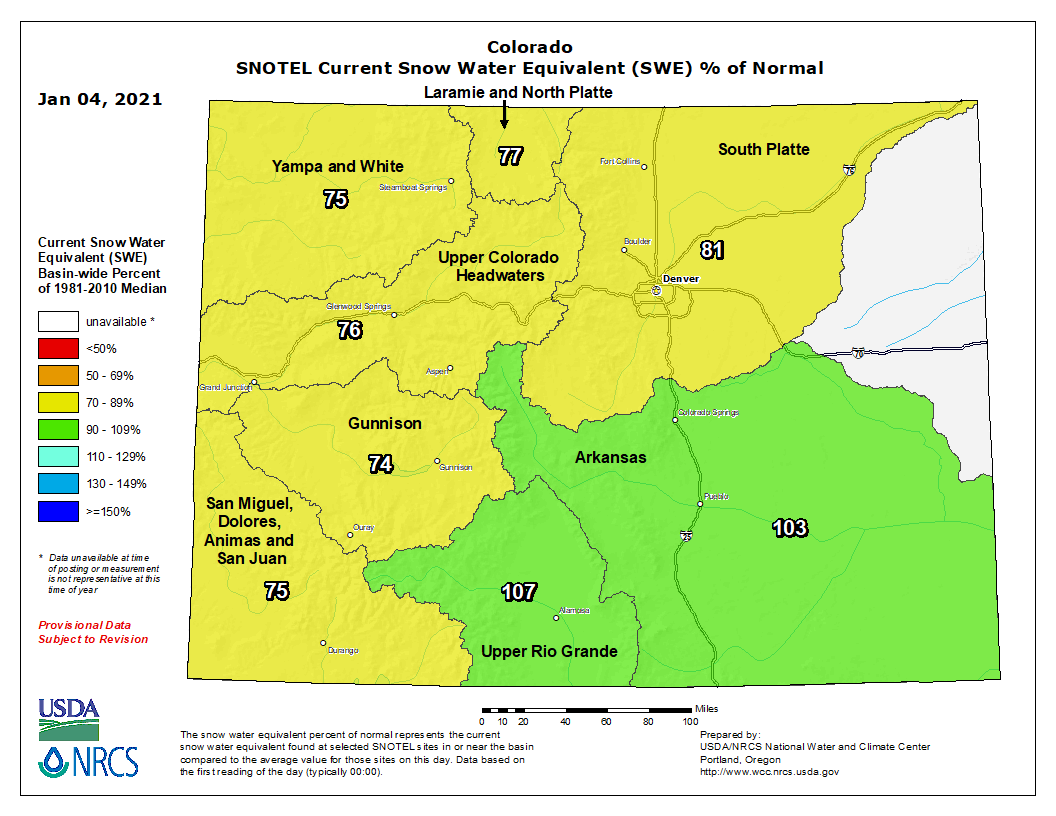 The State of the Atmosphere: Monday, January 4th, 2021

Happy New Year to all. We hope you had a quiet, wonderful, and safe New Year's weekend. We look forward to sharing the weather with you in the year ahead!

The state of the atmosphere to start 2021 remains mostly unremarkable across the region. While we do see a few snow chances on the horizon, nothing convincingly so at this time and our mountains will need more than that to catch up after a slow start to the season.

A look at current snowpack across the state shows most basins running well below average to start the new year. Somewhat remarkably, the only basins running near to slightly above average are those across Southeast Colorado, where a couple of storms have helped battle the ongoing drought there, at least a little. Otherwise, our basins are running around 75 to 80% of normal at this time:

The week ahead
The week ahead will feature some snow chances, but whether that ultimately amounts to anything remains to be seen.

The first chance arrives tomorrow, and is a slight chance at that. For the Denver area we're looking at about a 20% chance of snow Tuesday afternoon and evening, with little to no accumulation expected at this time. The northern mountains will be the only ones that may end up with a few inches of snow through Wednesday, with much of the state (as you can see below) remaining dry. Still, should you see a snow shower move through the urban corridor on Tuesday, don't be caught off guard, and of course the possibility for another period of strong winds especially close to the foothills Tuesday afternoon.

If we look at the GEFS outlook for the next ten days we see the next system arrives this weekend. In the chart below, the checked boxes indicate tomorrow's system to the left, and the weekend system right. There's perhaps a bit more of a signal for some moisture this weekend, but as you can see not great agreement between the ensemble members (30 of them along the y-axis) as to timing and how much (if any) precipitation may fall.

The GFS remains faster and further north, and with that has a bit more snow (but still not much) for northeast Colorado Saturday afternoon into Sunday, while the European is a few hours slower and further south.

Here's a look at the GFS, with the low dropping out of the Pacific northwest and moving through Southwest Colorado Saturday morning (see the green/circle):

The Euro tracks that low a bit further south, and is about 6 hours or so slower with its progression southeast. Here is a look at its 500mb forecast for Saturday evening:

The eventual track of this system will determine if and if so how much snow we may see this weekend along the I-25 urban corridor. Neither, at this point, points to a big time snow event – but perhaps something! For what it's worth, are are the probabilities for 1" of snow or more between now and next Monday evening from the Euro. If you want a sure-bet on snow, head to the northern mountains this week: