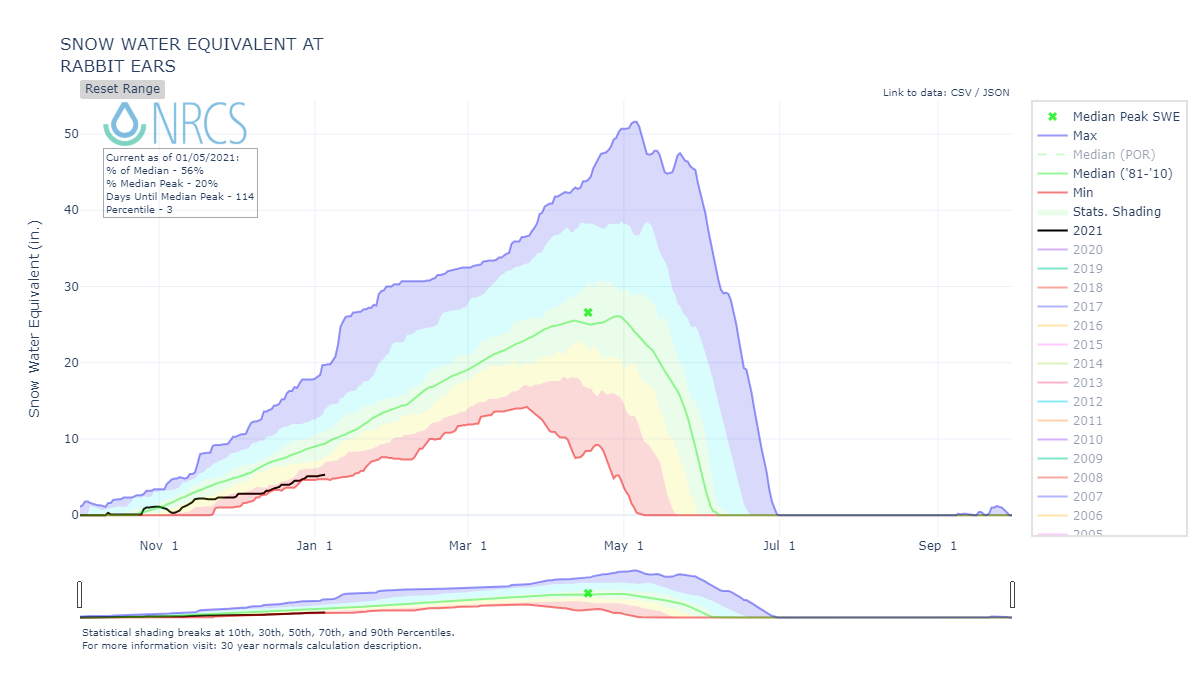 Some of Colorado's SNOTEL sites are in their lowest 15th percentile for snow water equivalent to date, and the state's average has dropped to kick off the year.

Colorado sits at 80% of average snowpack as of January 5th's assessment, which is down several points since the end of December.

Let's do a visual check of snowfall for the season thus far.

Now, let's see how that snowfall compares to average. This uses the NWS snowfall season, which starts July 1st.

Looking at that previous map, the state looks to have received hit and miss snowfall.

One can argue about the accuracy of those maps which interpolate data obviously and that's tricky with far fewer reports over mountain locations. Let's look at our most accurate mountain sensor network, SNOTEL – which is what the state's average snowpack is determined from.

I mentioned above that the state's snowpack is now near 80%. To me, that doesn't sound like much of an issue – it is early in the season, after all.

However, look at the stations themselves and how their current snow water equivalent compares to historical values and you'll see many sites are in their lowest 15th percentile.

I looked over each and many are in their lowest five seasons to date. I grabbed data for Rabbit Ears as it is currently in its 2nd lowest snow water equivalent on record.

The only year with a lower snowpack for Rabbit Ears by January 5th was in 2012.

I'm not trying to forecast or to insinuate that 2021 will be like 2012... I pray that it does not end up that dry, but this is certainly indicative of how far behind some stations are for the season.

With La Niña and a persistently positive PNA, the atmosphere has a lot of changes to overcome if we are to reverse the trends observed in the first half of the season.

For outlook purposes: Brian Bledsoe recently published a blog of La Niña status and one model, the NMME, outlook for early 2021.