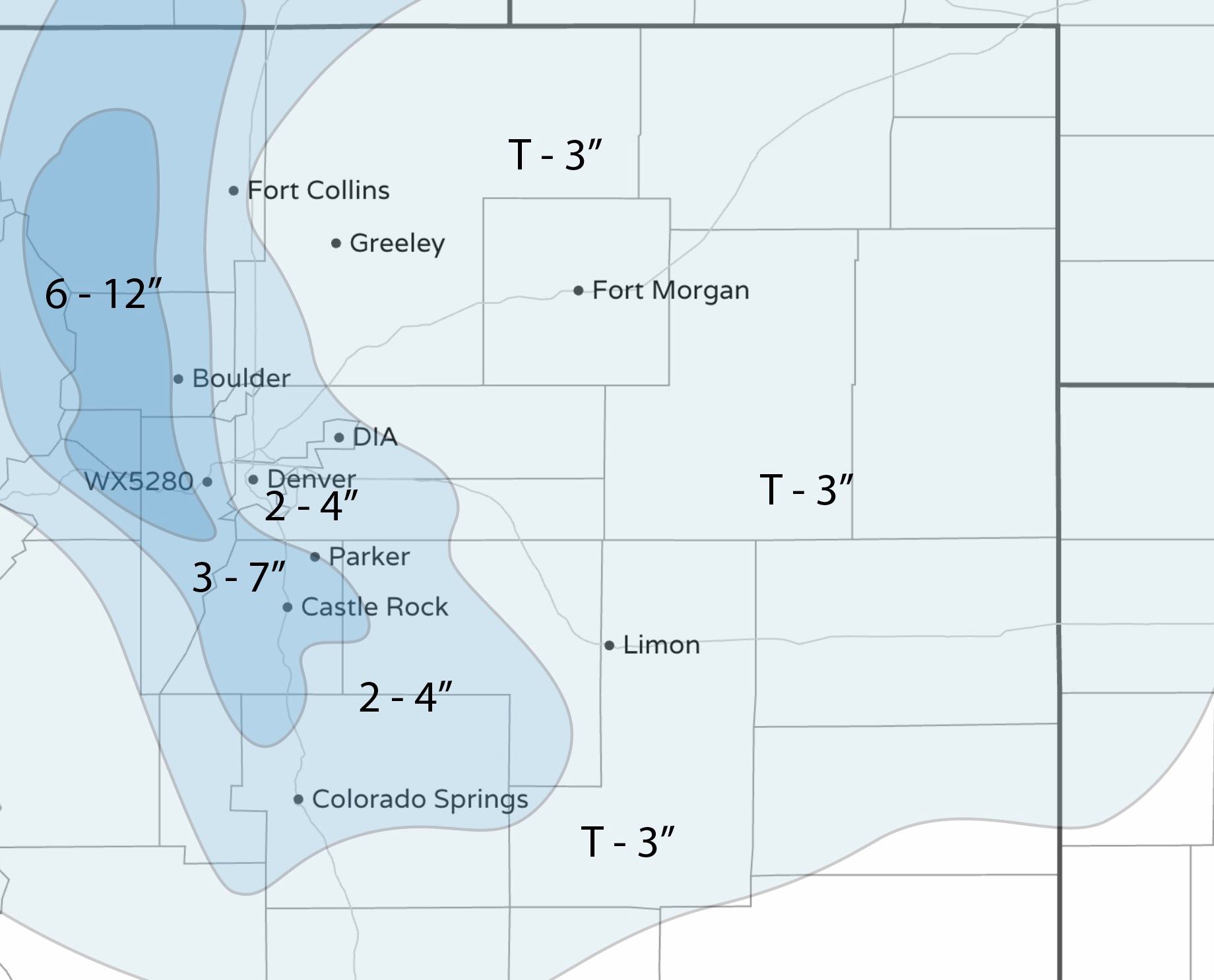 As is almost always the case, the cold front has arrived ahead of schedule this morning. Winds are out of the northeast now, with temperatures in the 20s and 30s across the plains and urban corridor.

Denver International Airport warmed to 42°F briefly ahead of the front this morning, and will now remain in the low 30s through the remainder of the morning, with temperatures gradually falling into the 20s this afternoon and evening. We still expect bitter cold temperatures by Tuesday morning behind today's snow, with lows in the teens for most of Northeast Colorado.

Fog and drizzle that accompanied the front will stick around through midday. Up north near Fort Collins it's likely we start to see snow develop through the remainder of the morning. For much of the urban corridor the heaviest snow is still expected to hold off until this afternoon/evening, though we'll see if the arrival of this front moves up timing a bit with the snow as well.

Heavy snow at times
The snowfall forecast hasn't really changed. We expect as snow develops later today it to become heavy at times, with snowfall rates under the heaviest bands in the 2 to 3" an hour range.

The animation below shows the HRRR 1 hour snowfall total forecast for today and tonight. Snow will increase across the north this morning, spreading south through the afternoon and evening, before gradually coming to an end after midnight across the region. The purples indicate 1 hour snowfall totals of 1.5" or more – watch has a band of pretty intense snowfall moves from north to south, with the heaviest snow focus along and west of I-25:

Snowfall forecast
We won't adjust the snowfall forecast much at this time. The 6 - 12" zone may be too widespread, but we think especially those north of I-70 in through Boulder and Larimer county will see some bullseye totals of upwards of 6".

For Boulder and Denver's western suburbs, 3 - 7" seems very doable, with perhaps some locally higher totals right along the foothills. For Denver central we'll stick with 2 - 4", but should the band of heavy snow take its time moving across the city this evening, we could end up low here – we'll see!

The main change we will make is to include COS in the 2 - 4" range, as it looks like the heavier snow band could very well hold together as it moves over the Divide and bring some good, if brief, totals to the COS metro as well.

Cold!
The other part of this system remains the COLD. Temperatures across the plains will drop into the teens and 20s tonight. The record low for Denver on April 20th is 13°F, set back in 1966.

Highs will warm a bit on Tuesday, looking like highs in the 40s for the urban corridor, but another night with lows in the 20s is forecast for Tuesday into Wednesday.

There is more unsettled weather in the forecast through the remainder of the week, but temperatures should gradually moderate as we near the weekend.