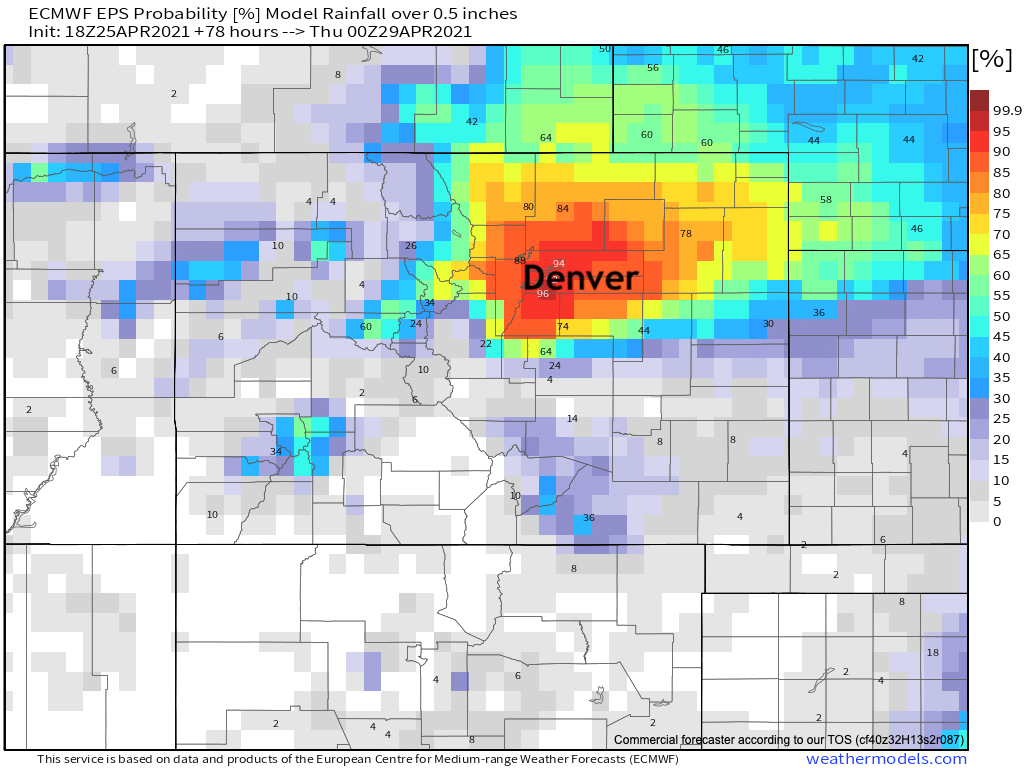 The official high today so far is 80°F out at DIA, but intra-hour reading had us at 81°F, so it could be that ends up being the official high today when records are set. In either event, a warm, warm day along the Front Range and much deserved! Today was the warmest it's been in the Mile High City since April 5th, and will either tie or nearly tie the warmest temperatures of 2021 for the city as well.

Outside of the warm first week or so of the month, it's been a chilly one! In fact, yesterday ended a 13 day streak of below average temperatures for Denver, the coldest of which ran a whopping -24.3°F below average for the date on April 20th.

The week ahead
We should keep our next system at bay just long enough to put together another very mild day on Monday, with highs once more in the upper 70s to near 80°F expected along the urban corridor.

Along with the continued warmth, and with an approaching system, we'll see much more wind across the region Monday as well. This will equate to high fire danger for many, with a Red Flag Warning in place most of Monday for much of Southern Colorado, Western Kansas, the Panhandles, and New Mexico, where winds could gust to 45mph and relative humidities will be in the 5 to 10% range:

In the hourly planner below, you'll note both a decrease in temperatures on the way for Tuesday, as well as an increased chance of precipitation returning to the forecast!

In the animation below you can watch as the ridging that's in place today (yellows and reds) is replaced but a trough (blues/greens) as we head into the Tuesday - Wednesday timeframe. You'll probably also note the pronounced ridging that seems to be following from the west at the end of the loop, which we'll touch on below.

The troughs path doesn't look quite as interesting as it once did for us, but should bring some cooler and wetter weather to Eastern Colorado nonetheless.

The kind of coverage in precipitation (and therefore snow) is just not as great as it once looked. Still, some good instability and storms will be possible Tuesday and Tuesday night which could lead to at least some localized heavy rain (and at higher terrain snow) with this system.

The favored areas for the heaviest snow will be elevations above about 7,500 feet, so think foothills/mountains west of Denver/Boulder/Fort Collins, with the Northeast Plains being favored for the heavier rainfall from this system – should the current track and timing hold.

We we do see the best ingredient come together for the heaviest precipitation we could see totals upwards of 0.5", we just see this not being as widespread as some recent storms given the setup. Still, some nice rain on the way for some, and another round of snow for others.

The key area to watch will likely be the Palmer Divide, and when that changeover to snow occurs Tuesday evening. While some models bring that changeover even close to the city, the threat of accumulating snow Tuesday night looks greatest above about 6,000 feet at this time.

The European model actually remains pretty bullish with this system, even as some have backed off a bit. We fear some of the precipitation numbers showing up in the data are likely overdone as models struggle to resolve the convective nature of storms Tuesday afternoon.

Still, for 3" of snow or more this model has the following probabilities:

As you can see, the Front Range mountains and perhaps western Palmer Divide could see some meaningful late season snow.

As for precipitation, well... again, it's bullish. We see the potential, but wonder how widespread the greatest totals will be. Still, pretty good odds from the best model out there for 0.5" of liquid or more for much of Northeast Colorado through Wednesday evening. The rest of the state will be much drier.

Late week and next weekend
As noted above, ridging is expected to return late in the week and for next weekend as well, and with that ridging a return of warm weather across the state.

After highs in the 50s both Tuesday and Wednesday in Denver we should be back in the 60s by Thursday, and on our way into the 70s and 80s for the weekend.

Here's a look at the 500mb pattern for next weekend:

And the corresponding temperature anomaly forecast:

That's suggesting temperatures well above average across the Southwest United States and extending up through the High Plains.