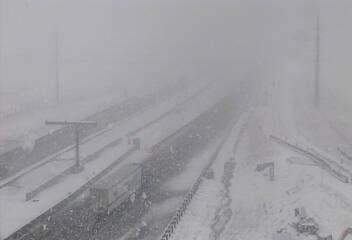 Intense snowfall Tuesday afternoon reduces visibility and slows traffic through the Gap Project on I-25 between Castle Rock and Colorado Springs.

Here is a view from a CDOT webcamera near Larkspur, CO at 2:45 pm Tuesday.

There are two snow squall warnings as of 2:50 pm, one for Douglas County and the other for El Paso, County.

The National Weather Service in Denver Colorado has issued a  * Snow Squall Warning for... Southeastern Douglas County in northeastern Colorado...  * Until 315 PM MDT.  * At 238 PM MDT, a dangerous snow squall was located 6 miles southwest of Elizabeth, or 29 miles north of Colorado Springs, moving east at 15 mph.  HAZARD...Heavy snow.  SOURCE...Radar indicated.  IMPACT...Dangerous travel.  * This includes Interstate 25 between mile markers 164 and 178 and the I-25 Gap Project.  Locations impacted include... Southern Castle Rock, Larkspur, Greenland and Perry Park.  PRECAUTIONARY/PREPAREDNESS ACTIONS...  Reduce your speed and turn on headlights! During snow squalls, the visibility may suddenly drop to near zero in whiteout conditions.

The National Weather Service in Pueblo has issued a  * Snow Squall Warning for... Northwestern El Paso County in east central Colorado...  * Until 315 PM MDT.  * At 244 PM MDT, a dangerous snow squall was located near Gleneagle, or 17 miles north of Colorado Springs, moving east at 20 mph.  HAZARD...Poor visibility in heavy snow.  SOURCE...Radar indicated.  IMPACT...Dangerous life-threatening travel.  * Web cameras were showing very heavy snow occurring across the entire length of the I-25 Gap project  Locations impacted include... Monument, Air Force Academy, Palmer Lake and Gleneagle.  PRECAUTIONARY/PREPAREDNESS ACTIONS...  Consider avoiding or delaying travel until the snow squall passes your location. If you must travel, use extra caution and allow extra time. Rapid changes in visibility and slick road conditions may lead to accidents.

The snow showers are favoring the Palmer Divide where several inches are possible through late Tuesday.

Here is the latest short-range model's estimated snowfall, which is showing a couple to few inches for Douglas, El Paso, and Elbert Counties.

There are areas of deeper snowfall expected in the high country, too.

For the Denver area and points east, we see mostly a rain chance through late Tuesday. Total precipitation for Tuesday afternoon and evening is shown:

Drivers be safe. There will be some intense snowfall rates for those snowfall areas. Otherwise, most all drivers will encounter some form of wet weather.