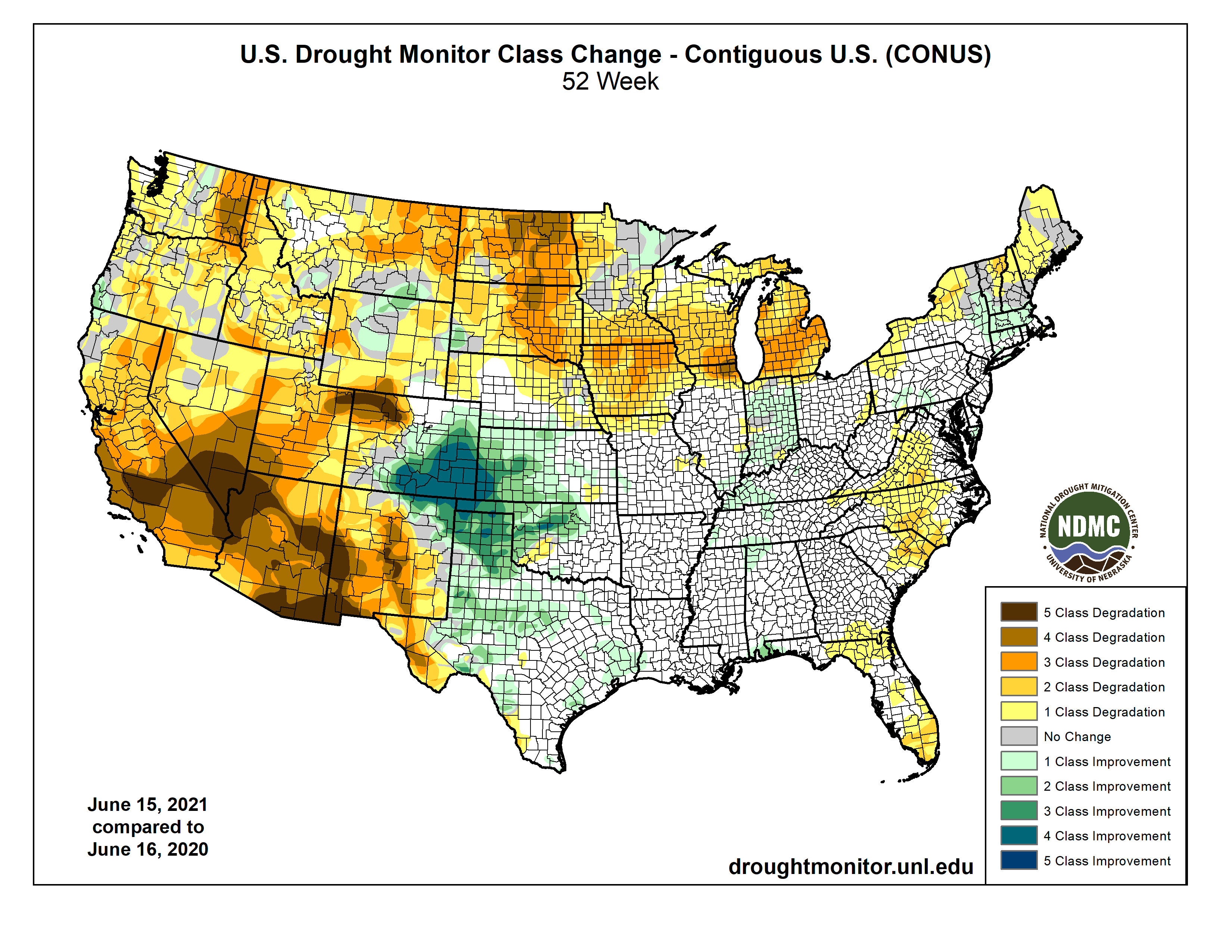 As western drought intensifies, so too does the heat

For those of us living across eastern Colorado, western Kansas, and the Texas/Oklahoma panhandles the recent streak of moisture has been a welcome but a bit of a surprise buck of the overall trend across the western U.S. which continues to see drought grow and intensify.

In recent months we've stressed the drought severity across the west, and increasingly so across the northern High Plains. While those immediately east of the Continental Divide and south of the Dakotas have benefited from an active storm track (driven at least in part by an active MJO) the same just can't be said for those to the west and north.

The most recent Drought Monitor report shows expansive drought across much of the Western United States, with our drought-free area being the anomaly:

To drive this point home further, look at the drought class changes over the last year across the CONUS. Southeast Colorado of all places has seen the most improvement, with nearly all of the western and norther tier of the U.S. seeing drought severity increase.

Record heat
As we watch drought conditions worse and fires begin to expand across the west, temperatures will be no help in the coming weeks as more record heat is on the way.

For Denver this next round of hot weather will be short-lived. Today's highs will be in the mid to upper 90s, with Wednesday coming in near the 100°F mark. While hot, this doesn't look like record heat for the Mile High City. With a forecast high of 98°F for Wednesday afternoon, we should end up well short of the record for teh date of 104°F  set in 2012. By Thursday, a better chance of storms returns to the Denver area as well as a good 10° drop in temperatures. Friday and Saturday will be cooler still – with showers and storms and highs in the 70s.

Across much of the west, and specifically the Pacific Northwest, the next couple of weeks look to be far from pleasant, with big time heat in the forecast driven by anomalous ridging set to move in later this weekend.

The 10 day temperature anomalies show actually some reprieve from the heat for the central and southern plains, but temperatures WELL above average for the northwest.

The GFS (imperfect) shows the expansive heat forecast by early next week along the west coast and intermountain west:

You can really pick any place and find records at steak. For the Yakima region in southeast Washington highs are expected to climb well above 100°F for several days this weekend and early next week, with highs of 106°F forecast for both Monday and Tuesday in the latest European ensemble mean guidance.

This would break the daily records (103°F is the current record for June 29th in Yakima), but would fall a couple degrees shy of the all time record high for the month of June – but that record of 108°F is no doubt at risk too!

And finally, of no surprise, where the hottest weather is forecast over the next 10 days so too will be the driest weather. For Colorado some better rainfall potential on the way after what's been a dry start to the month for most of us. Looking at 14 day precipitation anomalies, we see spotty areas with above average precipitation across the plains, but a dry first 20 days of June across the region overall.

Over the next 10 days this could change a bit, as better moisture is expected across the state, along with those cooler temperatures set to arrive after the heat today and tomorrow. One can hope!