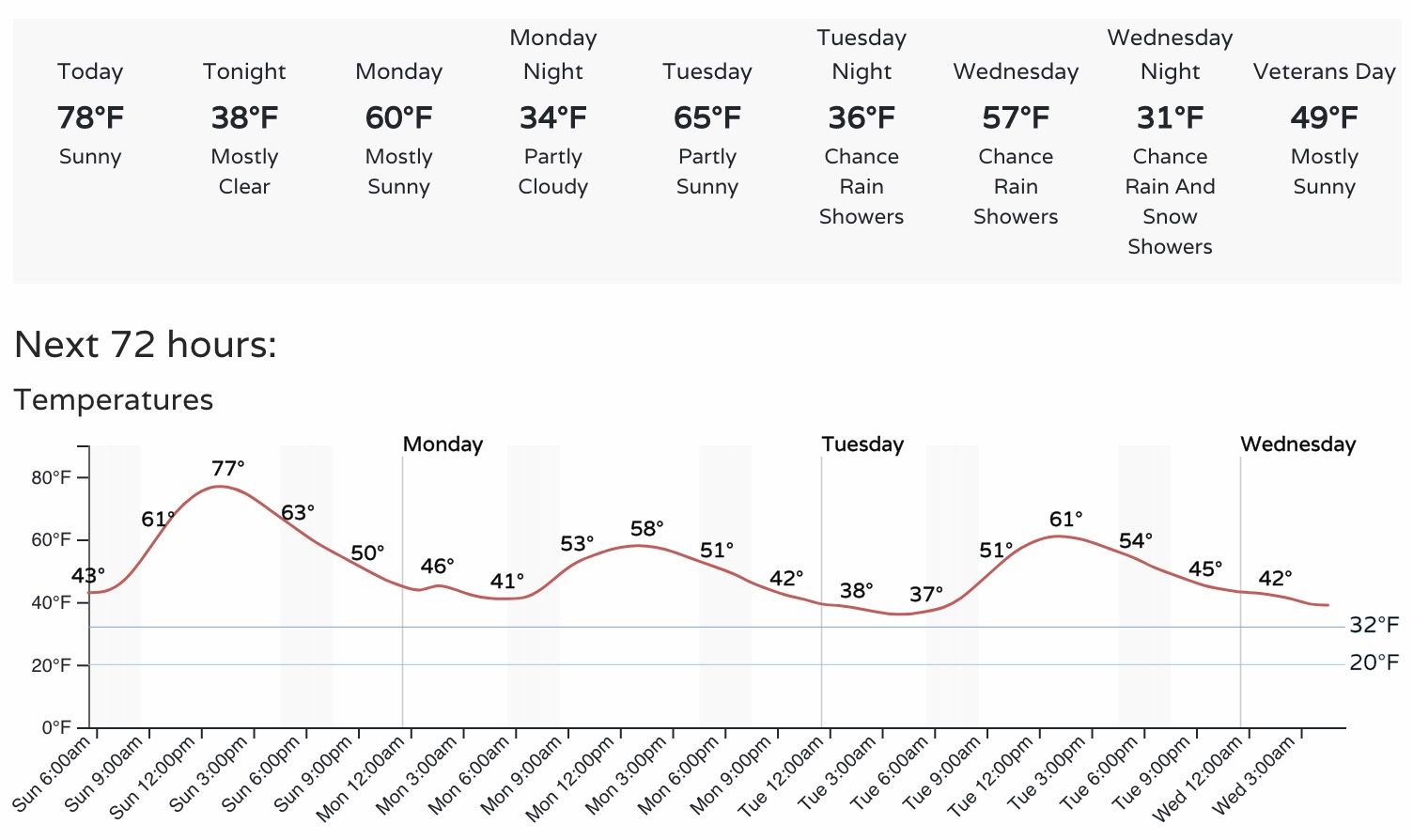 The State of the Atmosphere: Sunday, November 7th, 2021

I've lost track if this is second, third, or fourth summer... but my goodness how nice (albeit a bit strange?) has the weather been this weekend.

Denver recorded a record high of 80°F on Saturday, breaking the old record for the date of 79°F set back in 1934, and nearly tying the all-time record high for the month of November of 81°F set in 2017.

We'll make another run at summer again today, with near-record highs in the forecast once more along the Front Range. The record high for the date is 78°F (1999), and we should get awful close to that number this afternoon, with a decent shot at breaking the record once more today:

As you can see above, today will mark the end of the heatwave around here, but the outlook isn't exactly frigid either. With highs near 80°F today, it's probably not shocking to know that's well above average for the day – by nearly 20°F! Tomorrow highs will drop back into the upper 50s to low 60s, which is about where we "should" be for this time of year, if still a degree or two above average. By Wednesday PM/Thursday and Friday a more meaningful round of cool air moves in, and should drop us to below average for a couple of days before we more than likely warm up again.

What this equates to is highs dropping from the 70s today into the 50s and 60s over the next several days before we dip into the upper 40s for highs on Thursday. Again, cold? Maybe not. More November-like? It appears so.

While the late week system will no doubt bring a change to our weather, the likelihood of seeing any significant precipitation east of the mountains looks low at this time.

Will be replaced by a trough over the heart of the country by midweek. This will act to deliver a shot of cold air down the plains, and bring an end to our unseasonably warm weather:

For precipitation, the northern and central mountains will see the best moisture over the coming week, with only isolated to scattered showers east of the hills expected at this time. As you can see in the animation below, the best precipitation is expected to track north of Colorado, with our midweek system intensifying over the Great Lakes as we head into next weekend.

With that, if we compare Denver's probabilities for precipitation over the coming week, we see some chance enter the forecast by midweek, but it's minimal at best!

For the Steamboat area, perhaps a more meaningful week for snow, with good odds for measurable precipitation by Tuesday:

So, for snow lovers across the Front Range still waiting on your first snow of the season... odds are we'll go another week waiting. Never say never as showers will be in the vicinity midweek, with perhaps some of those being snow by Wednesday night, but the chance that accumulates to something measurable for the city is minimal at best.

The European ensemble mean snowfall forecast shows that some areas of good snow across the northern and central mountains through Friday night, with somewhere north of a Trace across the plains.

So barring changes in the system over the coming days, it's likely we'll cruise into mid-November with still no measurable snow for Denver.

For those wondering, we've still got a number of folks who guessed after today's date for the date of this year's first snow. If we really enter next weekend with still no measurable snow in the city (a high likelihood) the next question that'll come to mind is if we'll set a new record for latest first snow of the season for Denver. That date currently stands as November 21st, set back in 1934.

In 2016 we came close (November 17th!), but this year is in the running to be one of the latest as well. The latest GFS shows some snow around the 17th again this year, but most data would suggest the record of November 21st is in jeopardy.