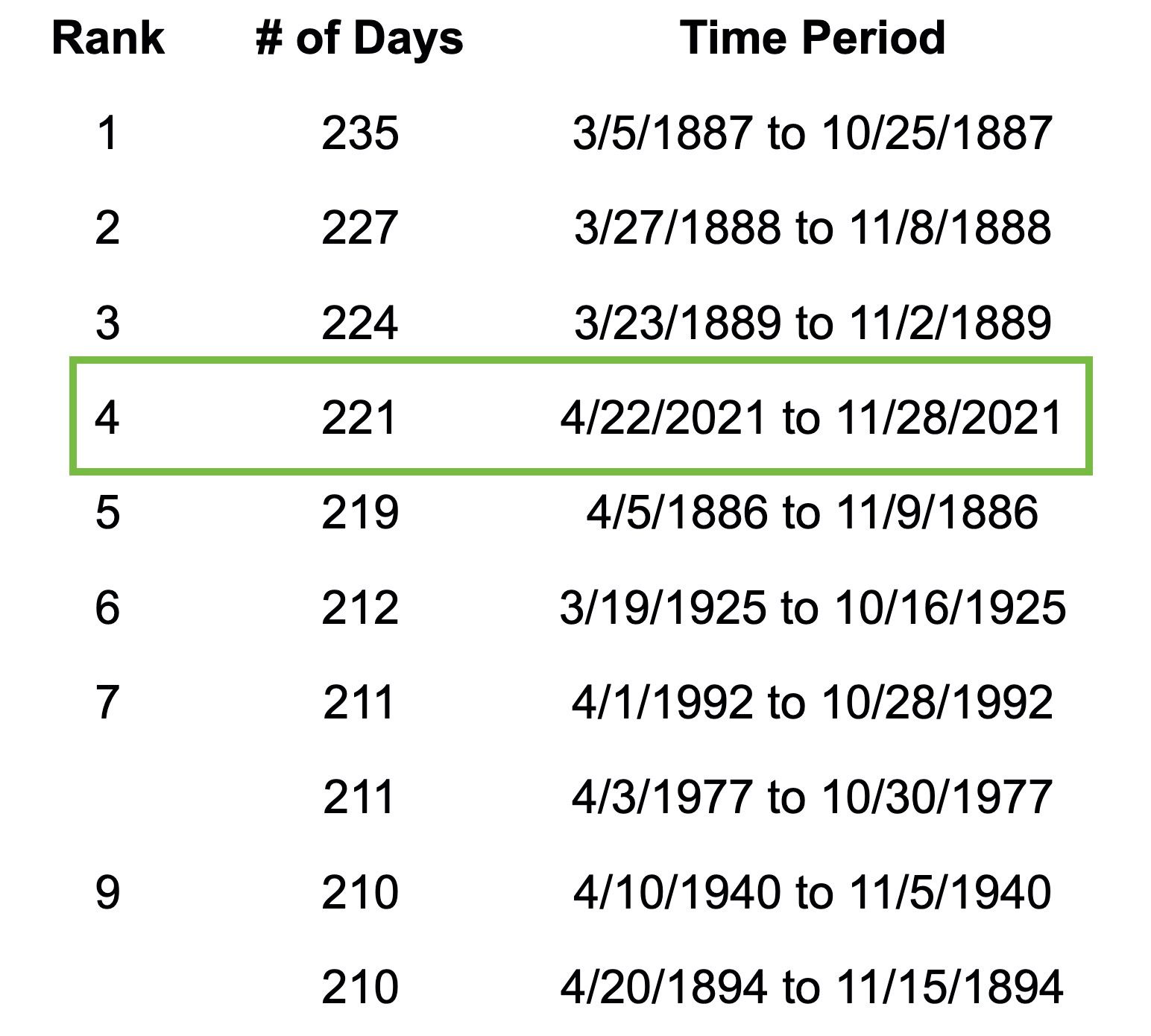 We continue the wait for Denver's first official snow of the season. The previous record-latest first snow, set back in 1934, is now a week behind us, and there's not much snow to speak of in the forecast either. Denver's first snow of the 2021-22 season has yet to be recorded despite snow this past week for parts of the metro area.

Thanksgiving Eve did feature some nice light snow across the region, but most of what managed to accumulate hugged the foothills, with a Trace to 1" for the western suburbs of the Denver metro area, and 1 - 5" across portions of the Western Palmer Divide. For areas east of I-25, including DIA where official records are kept, little to no accumulation was reported. Below is a look at the five day snowfall totals across the state ending Saturday.

Meanwhile, we creep closer and closer to setting a new record of consecutive days without measurable snowfall in Denver as well, with today moving into the 4th spot on the list since records began.

It's been 221 days since Denver has seen measurable snow, with a very likely chance we'll move into second place and even the chance we set a new record on this front not out of the question as well, with no clear signal of snow in the next 14 days, perhaps a chance coming during that latter half of the period. Perhaps.

For the week ahead... Well, no snow is in the forecast. Highs will be in the 60s and 70s most afternoons across the region, with the dry pattern continuing.

Below is a look at the 15-day temperatures from the European ensemble mean for Denver, with temperatures starting to cool in the means by next weekend, but nothing all that remarkable either.

Big time ridging across the west will keep the mild and dry pattern going to end the month and begin December. Here's the 5-day 500mb forecast ending next weekend, with the only trough to speak of up across New England.

With this pattern in place, not surprisingly it'll be a very dry wee across most of the CONUS, with nearly all locations look at a average to below average precipitation for the week:

While some of the operational model showing signs of life for our weather pattern come the second week of December, the ensemble products aren't quite there yet. The Euro (below, top) shows the ridge parked over the Southwest, with the GEFS (bottom, bottom) showing the ridging progressing a bit more eastward which would indicate a bit more activity across the Pac NW, but not much winter for our region just yet.

The operational GFS, shows a better pattern kicking off around the 7th or 8th of December, with a series of troughs moving into the western United States and across Colorado.

The European deterministic is trying too – with its December 7th trough looking a bit more progressive as it swings through – but this would at least bring us some cold(er) air?

What we know of sure is the final days of November are to stay warm and mostly dry across the region. We'll be keeping a watchful eye on what may change for December, but any weather that may head our way of any significance is still a ways off.