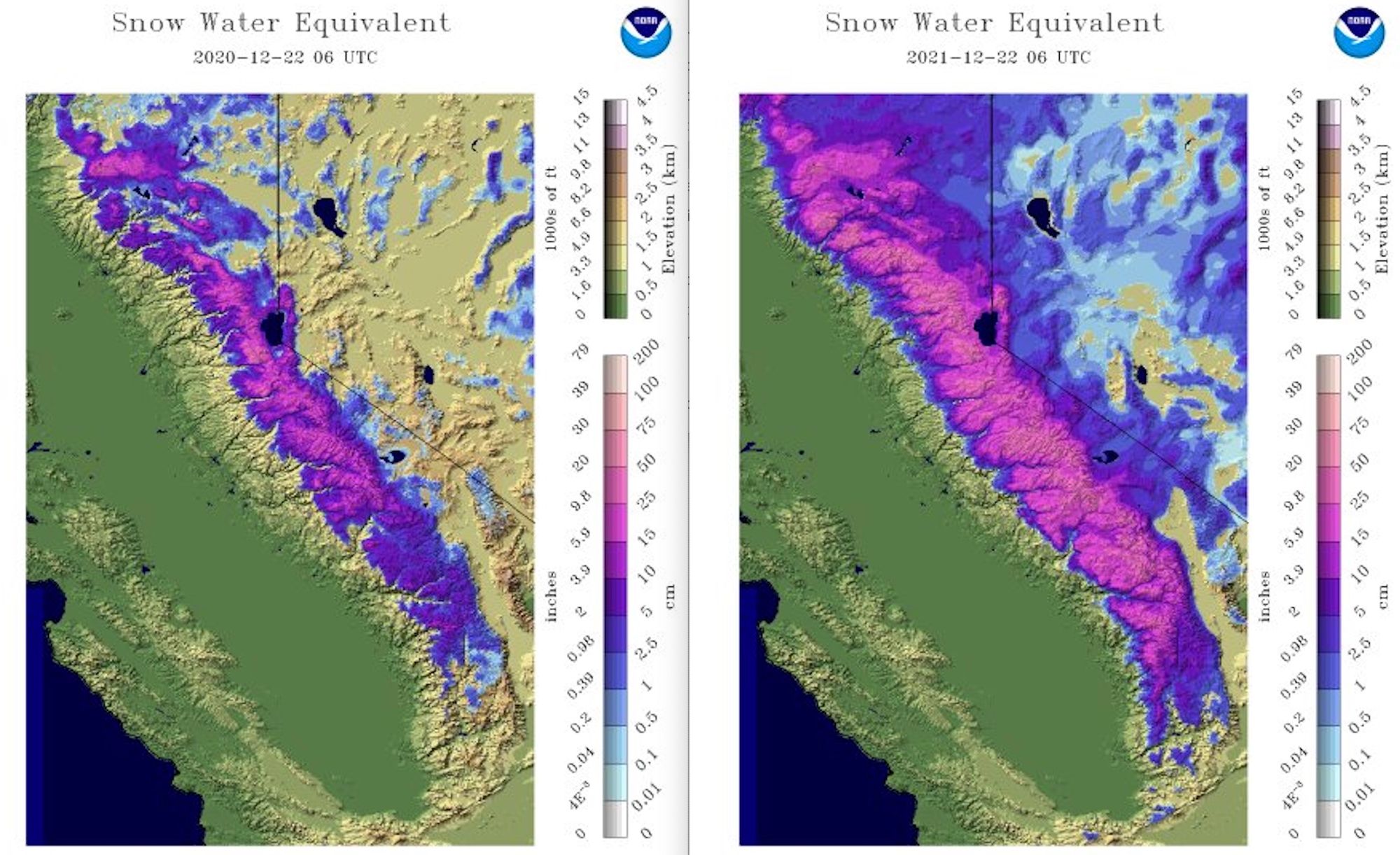 While we finally "officially" saw our first snow of the season earlier this month in Denver, let's face it, we're still waiting for our first real storm of the season. Denver is moving into the final days of December with just 0.3" of snow in the books, and an oversupply of warm and windy days.

Across the west the pattern has meant something entirely different, with plentiful moisture crashing into the west coast this month and more to come before the end of the year. Given the slow start to the year, we still have work to do across most basins in the west, but comparing SWE for Dec 22, 2020 (left) to Dec 22, 2021 (right) we see just how much improvement we see in snowpack this year vs last year at this time across California, for example:

The animation below is the latest GFS model outlook from today through the end of the year. If you watch first the west coast and Great Basin you'll note a very active pattern across the region, with mountain snow and valley rain through pretty much the entirety of the animation. If you then focus on Eastern Colorado... well, the pattern here too remains mostly unchanged. Dry.

All this will equate to a lot of snow for some areas of the west, particularly across Washington, Oregon, and California... but the interior west is set to capitalize on some of this snow as well.

The European snowfall forecast for our mountains is beautiful, with several feet showing up in the data through the end of the year.

Of course this model also shows a couple of inches over the next 10 days across the northern urban corridor. Some of that remains in the data for Christmas Eve, but like we said in this week's SOTA remains a low probability of occurrence, with perhaps a strong cold front and a bit of snow around the new year. We'll see.

Whether we manage a bit of snow before the end of the year, or perhaps just after the new year begins will be something we can tackle in future updates.

The big story to end 2020 will be the wet and snowy pattern across the West, and continued dry across the plains.

As for our rain and snow chances this week in Denver? Well, they are still there, but not exactly great. The European remains the most bullish model showing a Trace to 1 or 2" across portions of the northern urban corridor, but even it has backed off snow potential a bit. Most other models focus the moisture in the mountains with only isolated scraps peeling off the hills Thursday night and Friday. While not impossible, the European seems too cold for us, where we expect any precipitation we do manage to see to come in the form of rain, or a rain/snow mix.

As for precipitation probabilities... well, there's a chance?

Compare that to Aspen, which is likely to pick up between 1 and 2 feet of snow between Thursday afternoon and Christmas morning, with more to follow:

As for the cold we teased the other day?

Well, we remain in a wait and see.

The last week of the year looks quite cold across western Canada and much of the west/northwest United States, but at least the 7-day mean will likely remain average to above average across Northeast Colorado.

The cold is still forecast to begin pushing south in the final days of the year, with the first 7 days of the new year looking quite cold across much of the CONUS, particularly the intermountain west:

A pattern which may persist into mid January at least:

Keep an eye out of some passing showers tomorrow night and Friday, and we'll pass along updates if anything happens to look a bit more meaningful between now and then.

One last item, wind. There will occasionally be gusty conditions from the mountains onto the plains the next few days. This appears to be more of an annoyance than a significant impactor, but do be mindful of wind creating blowing snow and dirt concerns for travelers.