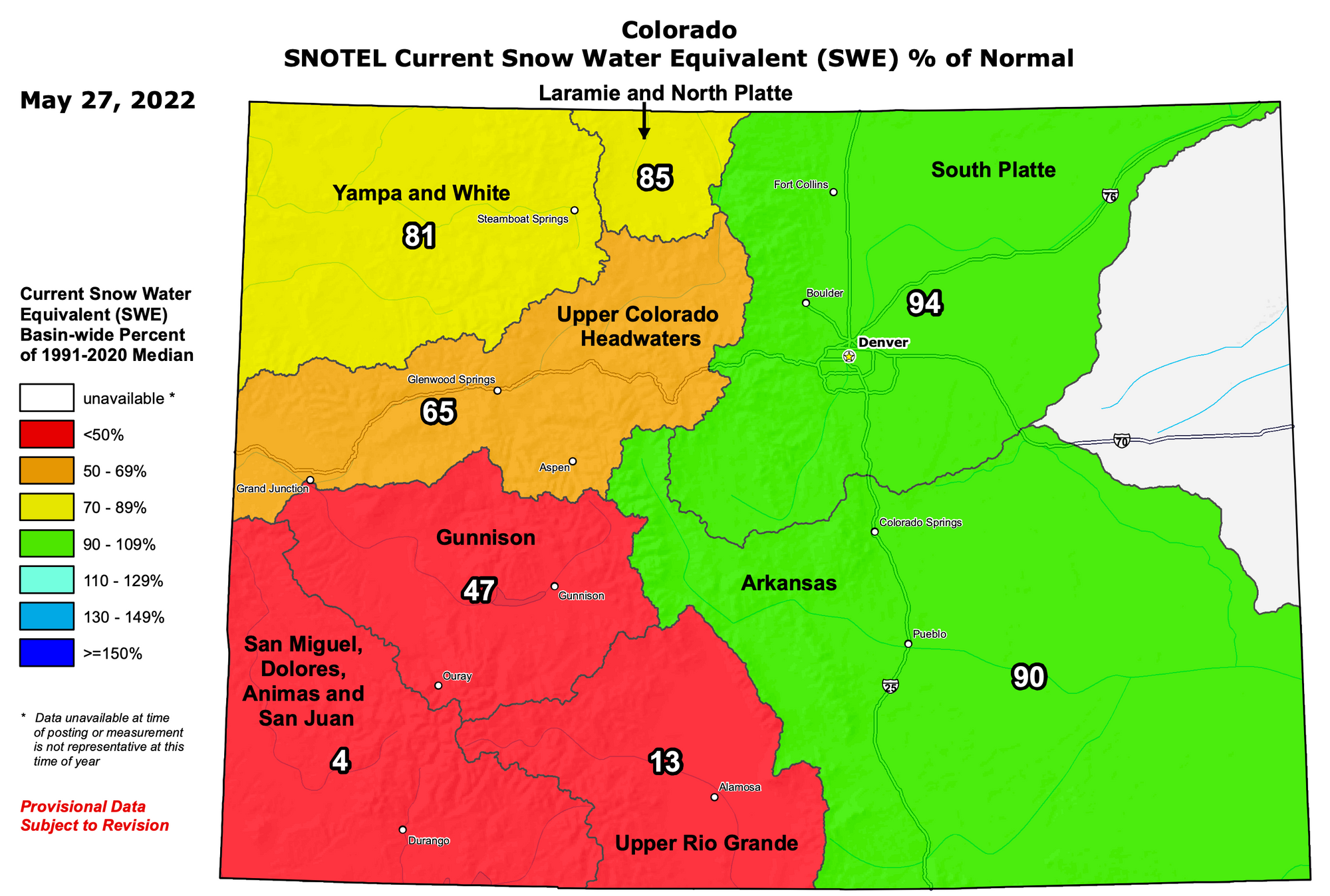 Hot end to the week, but a chance of more rain and snow before May ends across Northern Colorado

Statewide snowpack has ticked up a bit after last weekend's snow, but remains below average for this time of year. The statewide median is now 72% of average, but there are great disparities across the various basins across the state.

Across northeast Colorado basins are running near average, while southwest Colorado is all but out of snow, just 4% of average for the San Miguel basin!

Or visualized another way, huge deficits across southwest Colorado as the rest of the state is doing okay to end the season – or at least not awful.

It looks like another system will swing through next week to add to the snow up at higher elevations at least a bit before we dive into meteorological summer next Wednesday.

This is thanks to another strong trough that will slide into the Northwest late this weekend, then across the Great Basin and Colorado during the first half of next week. This trough will deliver cooler temperatures, rain, and snow to much of the state before exiting northeast Wednesday.

For temperatures, this means we are warm today and Saturday across Northern Colorado before gradually cooling off through the middle of next week ahead of a nice warmup to start June.

As you can see below, temperatures in Denver aren't expected to be nearly as cold as with our last round of wet weather – but lows near 40F look possible next week, and afternoon highs in the 50s or low 60s.

The storm track, on the whole, will be northerly. So the greatest precipitation anomalies will likely be across northern Colorado and points north. Of course, last week's system gradually trended further south, so let's not assume this one can't either.

We will start to feel the impacts of the incoming trough as early as Sunday, with mountain rain and snow on the increase, and a better chance of showers and storms across Northeast Colorado along with those cooler temperatures.

The mountains will see several inches between Sunday morning and Wednesday, with a chance we see more widespread precipitation across the urban corridor Tuesday into Wednesday. We shall see.

Snowfall looks to remain confined to higher elevations this time around. Here are probabilities for 3" of snow or more through next Wednesday:

And the mean snowfall forecast, a nice little bump to end the season up high:

As for precipitation totals through next Wednesday, well some places may do very well. The Euro ensemble mean shows some 1.0" totals across the northern mountains, with 0.5" to 0.9" across the Denver metro area and northeast Colorado. Some operational models show totals of 1.0" extending out across the Northeast Plains as well, a bit more bullish than the map below. We'd take either, and hope to see more of that water ultimately make it a bit further south.

So, for now, enjoy the warm weather to end the week and start the week. Know that we are tracking an uptick in shower and storm chances to end the weekend and start next week, with a good chance for the mountains to pick up a bit more late-season snow as well!