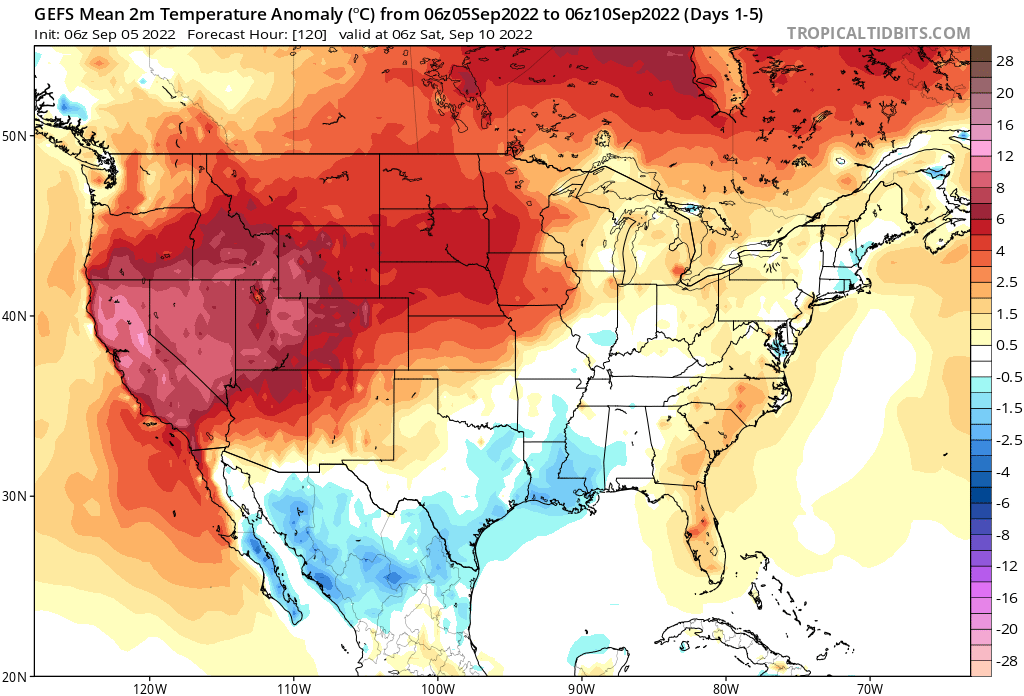 The State of the Atmosphere: Monday, September 5th, 2022

Good morning and welcome to the first full week of September. September marks the start of meteorological fall, or as we've come to know it in recent years around here the height of our summer heat! September 2022 has kicked off in the same tradition: exceptionally hot.

This week we will be under the influence of a remarkably strong ridge across the West, which will lead to record-setting heat for much of the Western CONUS.

Two meter temperature anomalies over the next 5 days shows the dramatic warmth we will be experiencing, with temperatures soaring to more than 2o°F above average for many locales this week.

For Denver, the hottest weather will occur over the next 4 days, with hope for a cool-down as we head into Friday and the weekend.

Until then, temperatures will be in the upper 90s to perhaps 100°F by Thursday. Regionally, it's be the same – hot just about everywhere.

Should the current forecast hold, we'll set a new record high in Denver Tuesday, Wednesday, and Thursday. With a high of 99°F today we'll fall just short of the new record for the date set last year (101°F), which isn't reflected in the chart below. The current forecast of 100°F on Thursday would smash the previous record for the date of 94°F set back in 1959. Incredible.

As you can see above, the pattern breaks down on Friday, with temperatures returning to average or even a bit below average to end the week. Highs in Denver will drop into the 80s Friday and perhaps into the 70s Saturday as we end up under the influence of troughing to our north, and the monster western ridge breaks down.

With ridging and record heat dominating our weather over the coming days, it'll come of no surprise we expect dry weather for the region as well. Here's the hourly outlook for Denver through early Thursday to reiterate that:

By the end of the week we will see a bit better chance of showers and storms returning to the region, though the weekend cool down doesn't look particularly wet at this time.

Areas to our south and west could see a more significant increase in rainfall by the end of the week as we watch a tropical cyclone develop off the Baja and anomalous moisture get pumped into the flow across the west. Right now, it looks like our mountains, mainly west of the Divide, would stand the greatest chance at benefitting from any remnants from this system, though the likelihood Colorado picks up meaningful moisture at this time remains on the low side. Still, good to see some moisture return to the atmosphere late-week, AND something to watch if you are headed southwest later this week.

The latest European ensemble mean forecast shows our area staying mostly drier than average over the next couple of weeks, with California and parts of the intermountain west seeing some of that tropical moisture:

Unfortunately, next weekend's cool down may be short-lived. The latest European forecast shows a beautiful cold front dropping us well below average Saturday:

But the heat returning to the High Plains by early next week: