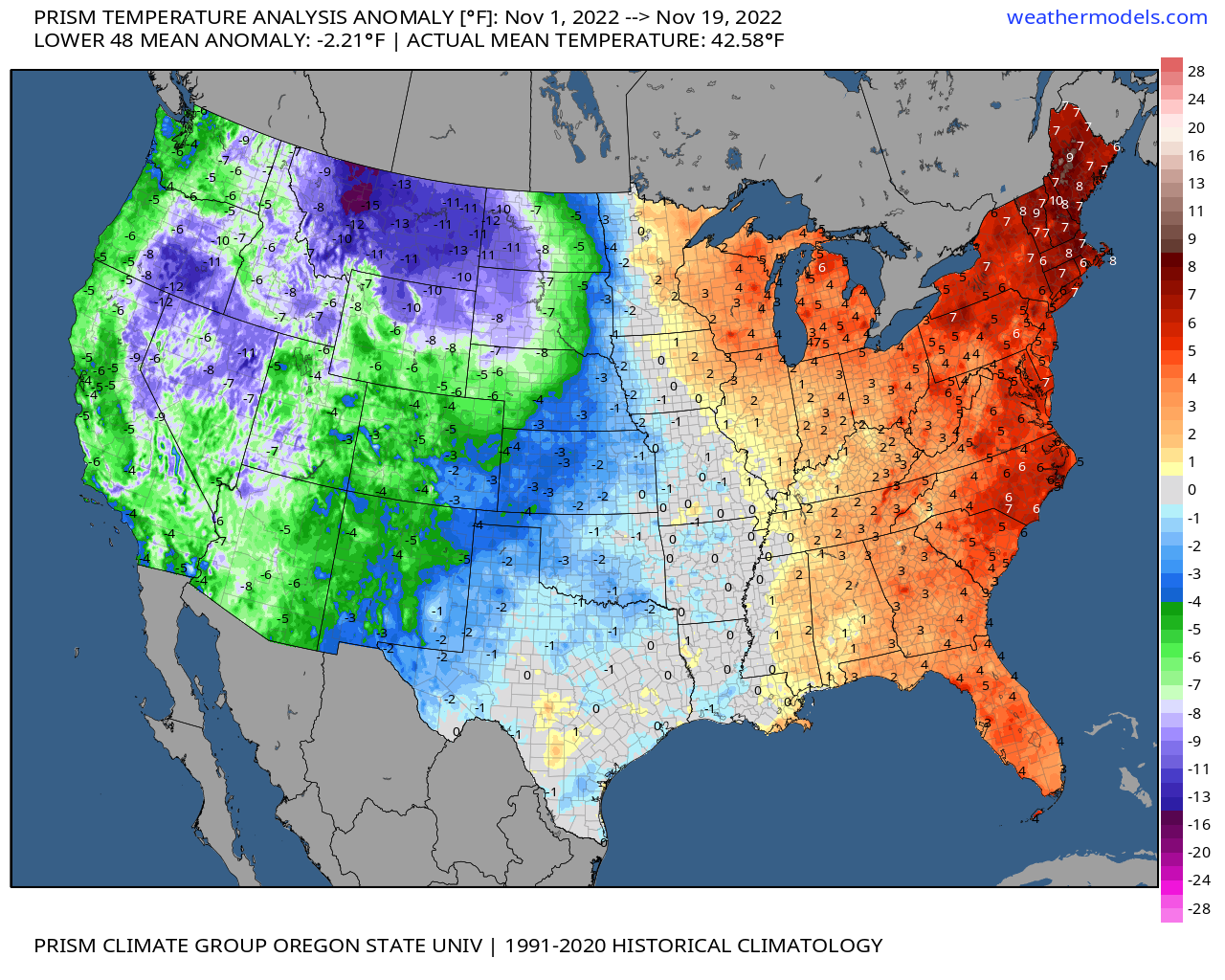 It's been a remarkably chilly month so far in a time where that's remarkably hard to pull off. Through the first 19 days of the November, Denver is running 5.4°F below average, with an average temperature of just 36.1°F so far this month. We will see the opposite this week, warming and nearing the 60s by the end of the week!

As our Insiders know, this month's pattern flip was actually well-telegraphed, with a good signal in October that November would feature some cold across the west and even an uptick in precipitation and early season snowpack.

For temperatures, it's been a cold month so far from the Plains west, with the bulk of the warm across the eastern seaboard and New England. Interestingly, we see how the back half of the month is turning into the opposite with the cold weather hitting back east, including the lake effect snow event near Buffalo. Interesting to see how the first half of the month was so hot back there:

Precipitation hasn't been over the top by any means, but some nice moisture across the intermountain west nonetheless, and above average for Eastern Colorado so far this month:

The season is early yet... it's hard to find too much to complain about when looking at snowpack across the Western U.S. to start the season. The driest basins area across Wyoming and Colorado, with nearly all basins to our north and west running above average as of November 19th.

For Colorado specifically, snowpack is running about at average, with basins along and west of the Continental Divide running at average to above average, and those east running below average:

For thanksgiving week the pattern will flip a bit. Ridging looks to be in command across the West which will bring a period of milder and drier weather to our region for the holiday week.

Here is a look at the mean 5 day 500mb pattern ending next Friday evening:

And precipitation anomalies for the same period:

While warmer, most of the week won't be extreme by any means. Highs a few degrees below average (the average high is 51°F today in Denver) over the next couple of days, then average to a few degrees above average through Wednesday. This model has highs in Denver for Thanksgiving in the low 50s, some models are a bit warmer. We should have at least one afternoon in the 60s this week, but could put together a couple depending on how things trend.

While we could see some snow showers across the high country Wednesday into Thursday (and an outside chance of one drifting across the plains) it looks like the next system to watch will arrive late next weekend into early next week, as most models carve a bit upper level low out across the Western U.S., and bring a round of chillier and wetter weather through the state for the final days of November. We shall see!