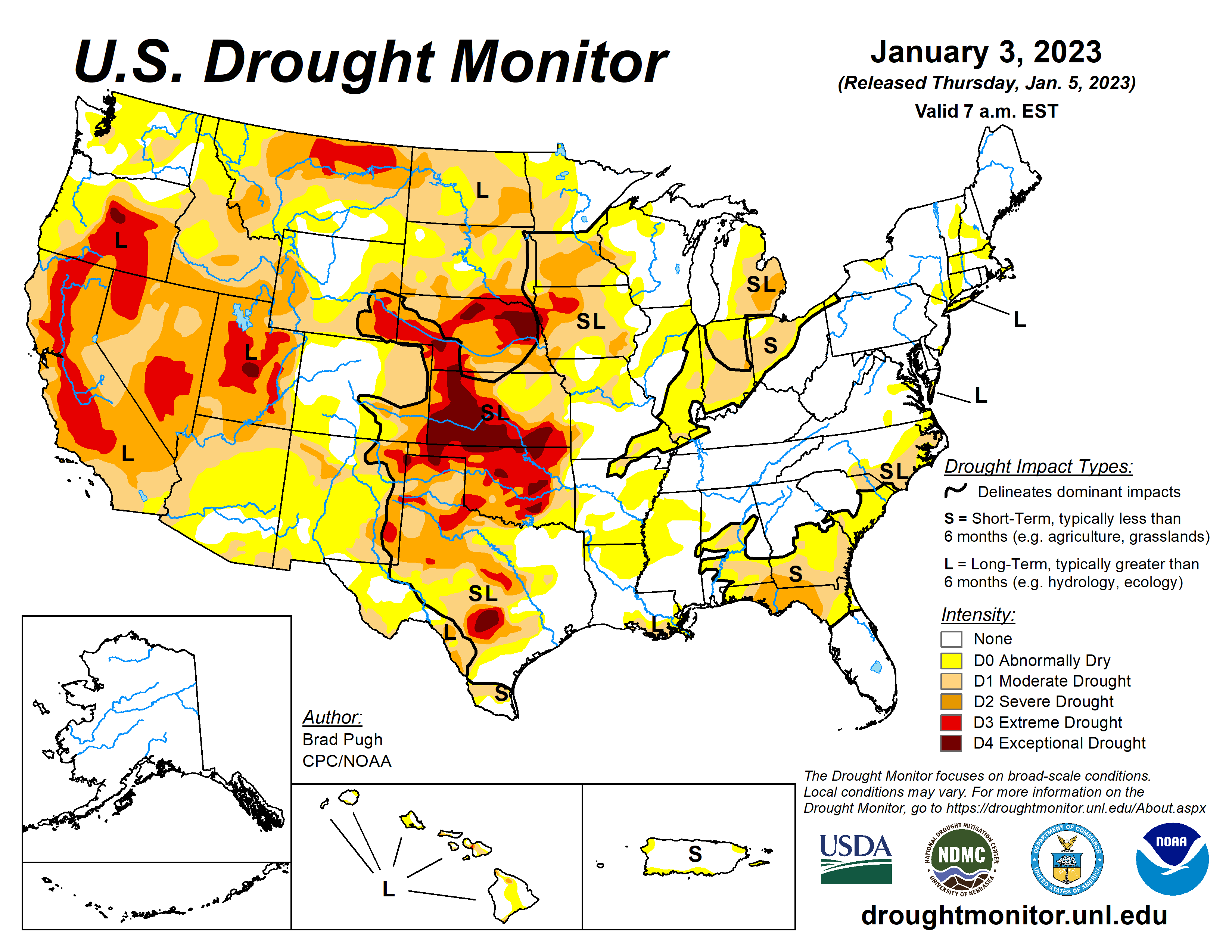 Recent moisture improves Colorado's drought outlook; a check on snowpack across the West

Some good news to share from the most recent U.S. Drought Monitor report released on Thursday, and that is that now more than a third (39%) of Colorado has been removed from the Abnormally Dry or Drought classification categories as determined by the U.S. Drought Monitor, which is up from just 13.75% a week ago.

We also saw great improvement in the D2 Severe Drought category, with more than 30% of the state falling into that category a week ago, dropping to just 12.28% yesterday.

The pattern over the last 8 weeks has been a favorable one for moisture, not just here in Colorado but across much of the CONUS. Looking at the change in drought classifications over the 8 week period shows some degradation across Southeast Colorado as they have not been as fortunate in capitalizing on this pattern, but on the whole quite a bit of green across the country, indicating drought improvement during this period.

For Colorado, recent snowfall has meant much of our mountains have now been removed from even any of the Monitor's classifications, including Abnormally Dry. Denver too is now drought free, where a year a go this week the city was in the D3 or Extreme Drought category. Looking at the map below, clearly still some work to do across the state, particularly the further east and southeast you go, but still room for celebration.

While we've seen a good period of moisture across the CONUS in recent weeks, the overall drought picture remains quite impressive. With the atmospheric river continuing to point at California for at least the next week (perhaps longer) we expect to see continued drought improvement in the west, but as you can see below, there's still quite a bit of work to do in erasing large-scale water deficits across the U.S.

Also of note, the central and southern plains continue to run quite dry, with widespread D3 and D4 areas of classification across Oklahoma, Kansas, and Nebraska.

Over the last 60 days we've seen the northern high plains picking up good moisture relative to average, this includes Northeast Colorado and much of Western Nebraska, but it's been quite dry across Southeast Colorado and Kansas where we have seen continued drought degradation, as mentioned above.

Given the above, it should come as little surprise that snowpack across the West is off to a good start. While the pattern has been nothing short of impressive for California, much of that moisture gets 'used up' before making it to Colorado. So, we've seen some good snow across our mountains over recent weeks, but by no means record breaking. Again, southeast Colorado continues to lag the rest of the state as the storm track has been more favorable north.

Still, hard to complain too much as Colorado's snowpack to start 2023 is sitting at 123% of median, which is actually somewhat remarkably similar to where we were a year ago for statewide snowpack!

While where we go from here over the coming months remains to be seen, the overall outlook is a bit more optimistic for water across the West given the assumption that La Niña will continue to gradually weaken. You'll recall that last water year, California came off an extremely wet December 2021, but then virtually shut off for the remainder of the season. While not as dramatic in Colorado, you can track the light blue line above and see a similar slowing after the first weeks of the year – from well above average to start 2022, to below average by the end of February.

For now, the flow of moisture into the West Coast looks to continue and with that we expect at least Western Colorado to continue to capitalize on that moisture flow from time to time. Here is the latest long range outlook from the European ensemble model which takes us through mid February – it indicates WELL above average precipitation for much of California and extending into the Great Basin, with above average precipitation for much of Western Colorado as well, but drying along the Front Range. While we're hopeful the urban corridor picks up a storm or two in this period, the overall idea is probably a good one.