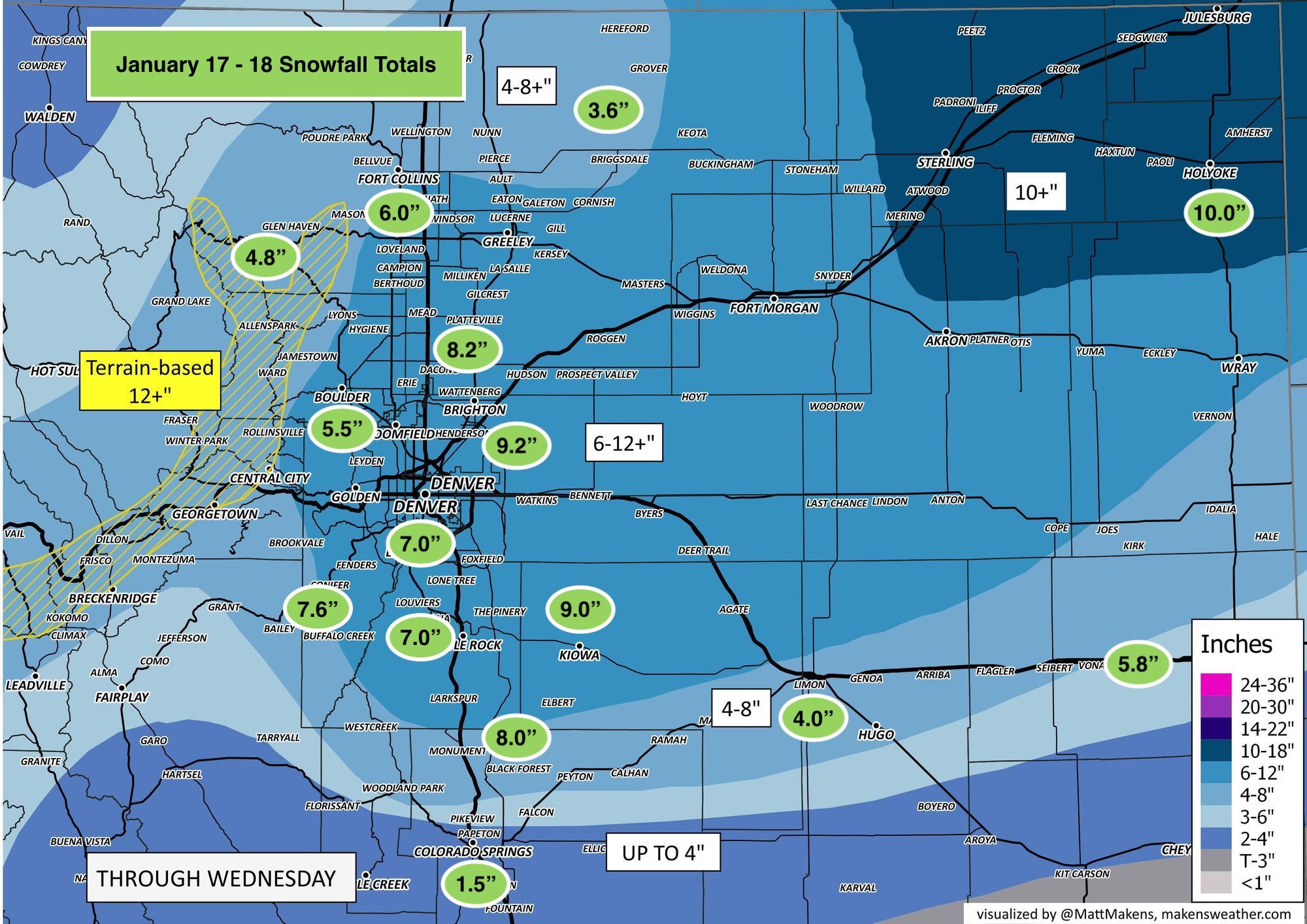 Denver area snowfall totals for January 17 - 18 storm; another round of snow headed for Colorado

Still, we aren't quite done yet! We suspect many of you are still see snow flying outside your window, and there's still enough left in the system that we expect many folks (not everyone) will ultimately get within at least the low-range of our forecast by the end of the day if you haven't already.

Looking at totals after the storm finally exited the urban corridor Wednesday evening we can pretty safely say that nearly everyone ended up in at least the low range of their forecast band thanks to good, persistent wrap around snow on Wednesday as the storm exited the state.

While the storm certainly didn't over-perform, it did what it needed to do for our forecast, and in the grand scheme of things will be one of the more notable January snows on record for the region, in a month that doesn't typically see wet, plentiful snowstorms.

Here's a look at storm totals (green bubbles) from across the region overlayed on our forecast. In some cases they are direct report, in others an average where there were greater clusters of reports (Fort Collins). Let us know if you saw numbers that differed, but pretty good overall!

At Denver International Airport, where official records are kept for Denver, we saw 9.2" of snow from this system – about as snug as you can get into a 6 - 12" forecast. While not the biggest storm on record for January, this does land as the 17th biggest snowfall for the month, and the biggest January storm since 1992 when the city picked up 14.8" of snow. This also brings the monthly total for January to 10.9" for the city, well above the longterm average of 6.5" for Denver.

As for precipitation, the storm logged 0.87" of precipitation at DIA, bringing the monthly total to 1.11" (wow!) which is 0.90" above average for the month. While not quite breaking into the top 10 spot for wettest Januaries on record, this storm gets us close! The 10th wettest January on record is 1.14" (1989) with the wettest on record being January of 1883 when 2.35" was recorded.

Another storm coming
The next system to impact the state is quickly approaching. It too will bring some good snow to parts of the state, but looks to focus its energy across the southern and southeastern portions of the state vs northeast Colorado.

Still, temperatures cool a good 10 degrees or so for your Friday, and we can't rule out some snow along the urban corridor once more as we kick off the weekend Friday evening. Here's the hourly planner for the Denver area:

This system is forecast to dip pretty far south which should mean most of the action stays south as well. Assuming nothing changes too dramatically between now and tomorrow evening this is great news really, as southeastern Colorado has largely missed all of the active weather we've seen this winter and remains the driest part of the state.

Models are in pretty good agreement with the placement of the heaviest snow band from this evening, hugging southeast Colorado and extending northeast into western Kansas and Oklahoma. Here is at look at the latest European model snowfall forecast – roughly a Trace to 1" for the greater Denver area, but upwards of 6" possible across the southeast plains:

With that, little surprise where the current alerts are in place for the state. Quiet up north here, but Watches in place for Southeast Colorado:

And here's our snowfall forecast:

We'll be watching trends today and offer updates as needed. For now plan on a quieter Thursday but the possibility of some snow showers around the region again Friday evening before we quiet things once more for the latter half of the weekend. If any big shifts occur in the placement of the heaviest snow from this next system, you'll be the first to know!