Little change to the forecast discussion we put out yesterday. Our storm remains on schedule, with rain and snow showers developing by late Wednesday, and increased intensity through early Thursday morning.

Overnight model runs increased QPF for the region across the board. The greatest threat for accumulating snow will again be at higher elevations, likely greater than 6,000 feet. With that, the National Weather Service in Boulder has issued a Winter Weather Advisory for the foothills and Palmer Divide to the south and west of Denver. Their forecast falls pretty well in line with ours, where we think 3 to 7 inches will be possible, with locally higher amounts. Timing of the heaviest snow could make travel difficult tomorrow morning between Colorado Springs and Denver, so please be prepared.

In Denver the snowfall forecast is a bit more tricky. Current thinking is there just isn't enough cold air to work with to warrant big snowfall totals in the city. While QPF may support several inches of snow, the reality is there will be a lot of melting on contact, and likely some rain mixing with snow as well. A few key elements to watch as the storm gets going:

We will continue to monitor through the day as this system continues to evolve and update as necessary. Depending on how things set up, we may fire up the live blog tonight and Thursday to push rapid updates as needed.

This system moves out late in the day Thursday, with sun and warmer temperatures on the way for Friday. There's another system close on the heels of this one that will bring more unsettled weather to the state for the weekend. Active pattern, stay tuned! 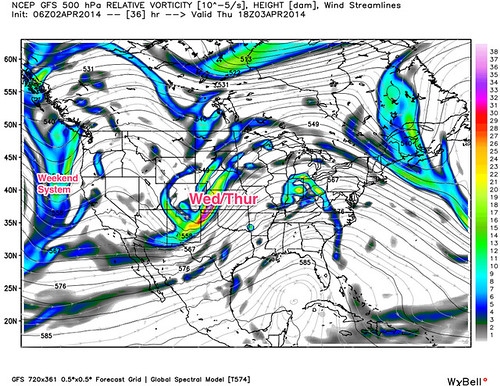