Wednesday morning's clouds were a great example of the "lenticular" cloud variety. Characterized for their "lens" shape and seemingly stable, motionless appearance. 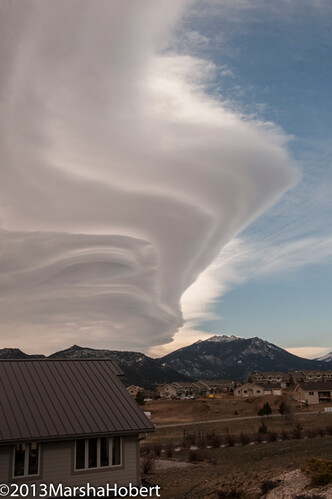 From a forecast perspective they indicate a strong flow of wind aloft, and will typically bring a downsloping wind to the Front Range and a big temperature boost. This is what happened today, downsloping wind indicated by mountain wave clouds and our temperatures have soared into the 70s.

Lenticular clouds indicate great instability in that layer of the atmosphere, and form in areas of mountain waves. Like ocean waves, these waves of air bouncing over the mountains are anything but stable.

It makes sense that it would be a "rough ride". Consider floating in a raft down a nice smooth river, add a few rocks and it becomes a much rougher trip. In this case, the air is the river and the mountains are the rocks. Our raft, in this example, are planes. If you've flown from Denver over the Rockies you are well aware of how turbulent those flights can be.

I heard a while back from a viewer that was an Air Force pilot. He remembered this from a mountain wave (standing wave) research flight in the 1960s over the Front Range: ". . . called my command post and told them I was breaking off the mission because the research equipment was incapable of even measuring what we were experience, so there was no reason to risk wing cracks or literal breakup of the aircraft. As I recall, a B-52 had its vertical stabilizer sheared off down near the Academy a few years before we did these missions." --Colonel Curtis Dale.

Mountain waves can be present with or without clouds. If you see Lenticular clouds (standing wave clouds) you have visual proof the air above is very turbulent. Although pretty, those clouds are "mean".