With the severe weather behind us, does winter have one last blast?
As we've mentioned several times this week, another system is headed for Colorado over the weekend, and this one could be colder and wetter for a good portion of the state. That's right, colder -- which means we'll be watching for the chance of snow, even some at lower elevations.

Models have had a hard time with this system, but have come into better agreement over the last 24 hours or so. The EURO and Canadian models have both been consistently bringing a potent area of low pressure over southern Colorado Saturday night through Sunday, with a good dose of well-below-normal temperatures and heavy precipitation. These two models have been producing nothing short of an historic May storm for the Front Range. Take a look at how much snow the Canadian produced for the region in yesterday's run. It plastered Wyoming with nearly three feet of snow in some locations! 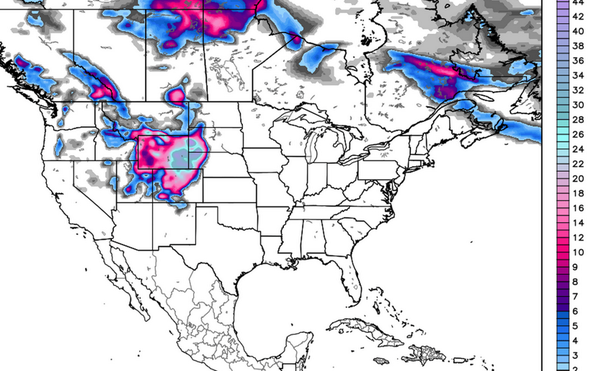 No, we're not forecasting this to happen, but this system should certainly have your attention. All three major global models we use (GFS, EURO, Canadian) support at the very least a rain/snow mix possible during the late Saturday through early Monday period for Denver. The GFS has been the least aggressive of the three with regard to snow, but in recent runs has also trended very wet. 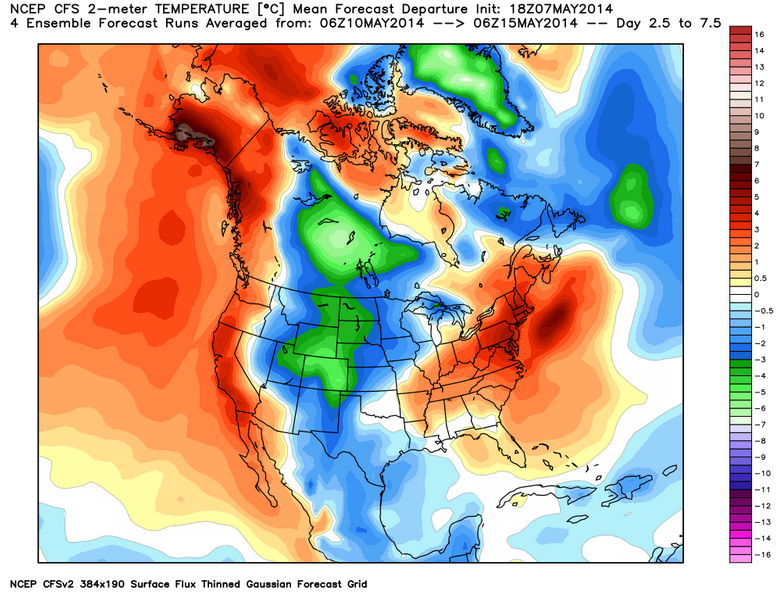 There's also growing confidence that this system will be WET. While questions remain with regard to what form it will fall in for some, all models have plentiful QPF for the entire forecast area Saturday night through Sunday night. The 12z GFS is a bit quicker than the EURO/Canadian, but still brings over 1.5" of precip to DEN with this system. It should be noted that the EURO has had the lead on this storm and the overall evolution of the pattern from the get-go. The Canadian fell in line next, followed by the GFS. So, with the EURO taking the lead with this storm system, its significant changes (if any) will be scrutinized the most.

Lower confidence for rain/snow line and eventual speed
How this system tracks will be the key for both how much precipitation we receive and what form it comes in. A deeper, slow solution would pull more cold air into Colorado, and would likely extend the precipitation event into Monday for northeast Colorado. A faster, more progressive system would have the opposite effect.

The Canadian and EURO continue to be the slowest and deepest with this storm, but the GFS isn't that far away from their solutions. Thus, the Canadian and EURO are the slowest to exit with this system, keeping troughiness over The Four Corners region for a considerable time. The EURO even keeps snow going for the mountains of south-central Colorado through Monday night and Tuesday!

Watching trends
Trends among all models are fairly consistent in bringing in a slow-moving, cold, and wet system. The GFS remains quickest to exit, but we expect it to slow. Ensembles are also coming into line, especially the GFS.

For now we'll go with a chance for showers late Saturday, becoming more widespread as we head into the early morning hours Sunday. We will stick with a rain snow mix for now in Denver, and adjust things as needed as we head into the weekend. The key here will be how closed the system becomes, and how much convective activity we see along the front Sunday. Should things fall in line just right, we'd see some pretty impressive snowfall rates that the models would not be picking up on yet.

This could be a pretty extreme event even if we don't get clobbered by snow. Models are notoriously bad with record or near record type events, so I would expect the unexpected with this system, especially in terms of the cold we might see.

Moisture is welcome for the whole state, but we may get more than is wanted in foothills northwest of Denver. East-central Colorado may get a decent bit of moisture, but it sure seems to shut-off the farther southeast you go, leaving the drought stricken southeast plains out of the loop. . . again.

Something else to note: last night's GFS Ensemble also brings in another system that is similar but less intense to our area around the 19th & 20th. Keep in mind, this is what the EPS Weeklies advertised almost 3 weeks ago for May. In fact, it has the Mother's Day system almost to the day...despite having lost it in more recent runs.

A lot to watch over the coming days, stay ahead of the storm and subscribe to Weather5280 for all the latest.