Transitioning into the Summer Pattern

Summer officially starts this weekend, June 21st. We know that Mother Nature doesn't follow a schedule, but there is some weather pattern shifting that will coincidentally occur with this weekend's solstice.

A Colorado summer pattern is a hot one, and as a result we typically find ourselves in wildfire season as we enter the month of July. Critical fire conditions spread from southern Colorado in June into the northern sections of the state for July and August. This isn't necessarily due to a drop in precipitation amount, but more so the timing of systems. In fact, on average July is wetter than June (2.16" vs 1.98"). Summertime temperatures are hot and we dry out faster causing the forests and our landscaping to go through some heat stress. The chance for severe storms does drop during the first half of summer, but Colorado does see severe weather during the summer months.

July typifies the season -- Denver's average highs soar into the 80s and 90s with July's record highs above 100. August remains hot, but the monsoon season kicks-off early in the month and can bring the return of valuable rains, with possible increase in hail severity. In fact, our average high temperature starts to fall once more come August 2nd!

El Nino has shown increased strength of late, but continues to fluctuate between weak El Niño to weak La Niña. If a sustained El Niño develops (which is expected), we may actually see a cooler and wetter summer season. We'll have another update on El Niño and this summer's monsoon outlook in future posts. The current ENSO meter:

The weekend outlook "on par"
The local pattern heading through the weekend is a typical one. Highs in the 80s through Sunday, with some afternoon rain chances. Friday and Saturday will be the hottest of the next five days, with increasing rain chances for Sunday and Monday. 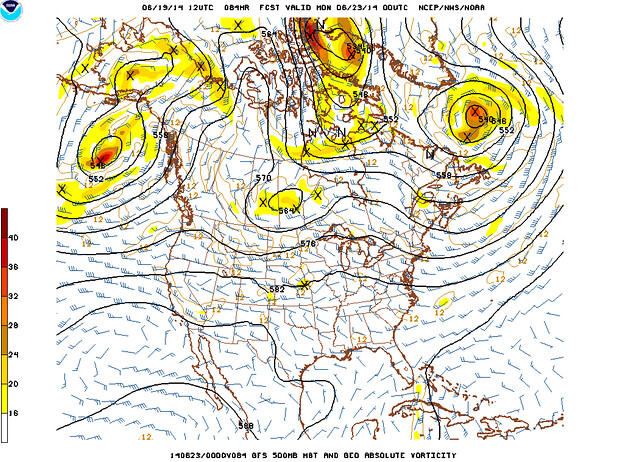 A very weak mid-level wave will move through the region and it will have enough energy to create stormy afternoons from I-25 to the east this weekend through early next week, most especially the plains of Colorado into Western Kansas. There will be severe storms with this system, but too early to pinpoint areas of greatest threat level. I'd expect hail to be the primary threat with the storms that will move through Sunday pm into early Monday am.

This system will spread greater rainfall amounts, too. This outlook shows the possible rainfall amounts as depicted by GFS through Monday evening, a great outlook for eastern Colorado and northern Kansas. 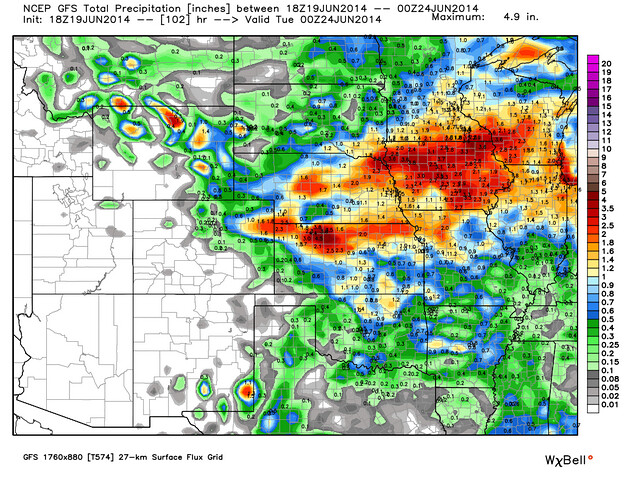 For your planning
Friday will be well into the 80s with an equal 10% chance for a storm statewide.
Saturday will again see that 10% storm chance with highs in the 80s, a greater threat for storms could occur for foothill communities west of Denver.
Sunday and Monday the storm chances increase for those on the Northern Front Range and Northeastern/Central Plains. These storms will keep highs in the 70s to 80s.