So far this month, Denver International Airport (DIA) has experienced slightly below normal temperatures (-1.4 ) month-to-date, and has recorded ~0.80” of rain versus full-month average of ~1.7”. (As is typical of hit-or-miss summer thunderstorms, however, some spots across central Colorado have picked up several inches or more of precipitation.)

Sunday marked just the 3rd day this month with 90 -temperatures, and the 26th so far this season. The average number of >90 days Denver sees per year is 40, so it appears likely that we will fall well below this number by the end of the warm season -- perhaps about 30 days total (or 25% fewer >90 days than is typical.) 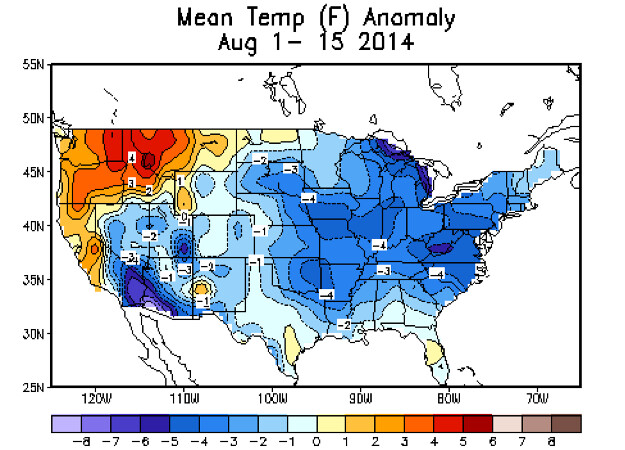 It would be fair to say that up through press time, most of Denver metro has seen slightly below normal temperatures with near to somewhat above-normal precipitation month-to-date. That said, we've seen several days in a row (including Sunday) that have featured slightly above normal temperatures, and we’ll look to continue that trend over the next 48 hours or so.

Looking Ahead
GFS ensembles show that we’ll experience a modest step down in temperatures through the remainder of the month: above-normal over the next couple days; near-normal for several days thereafter; finally, the probability of somewhat below-normal temperatures to finish up the last week of the month.

In short, we’ll experience a blend of above-, near-, and below-normal temperatures (likely in that order as the rest of the month proceeds), with a fairly seasonally-normal precipitation pattern. The week ahead should feature daily afternoon storm chances (some greater than others), with an eye on how models want to handle the potential for a cooler and wetter few days by next weekend.

Quick glance at September, October and November
Looking further ahead, I will leave you with a tease of what may be in store for us for September → November (SON) period according to a constructed SST anomaly model run by CPC. We see a zone of below-normal temperatures over the central part of the country, but the western extent is somewhat unclear. Other models show this zone of cool a bit further west to include the eastern half of Colorado.

And here’s what our top analog year -- 2009 -- looked like during the September → November (SON) period. You can see a small area of below normal temperatures over the central and southern Plains, including eastern Colorado. The Weather5280 team will have more in-depth look at how the fall months may shape up for us over the next couple of weeks.

America is Not Underwater, Literally

Let’s get a few things straight. Detroit, Baltimore, heck, even the entire northeast is not “America”. Throw in…