Yesterday’s snow was just enough to remind us what month it actually is after seeing a good round of rain the night before. Today temperatures remain in the 30s across the Denver metro area, with a stiff wind making things feel a bit more uncomfortable then we’ve grown accustomed to over recent weeks. Light snow and wind-blown snow continues across the eastern Plains today making travel difficult (and at times impossible) along I-70, but overall our weather turns quieter as we head into Wednesday.

Tracking our next system due in late Thursday
Our next system is still forecast to move into the region by late in the day Thursday, bringing with it a chance for snow by Christmas night. Latest model runs suggest a few inches of snow will be possible for Denver and across northeast Colorado Thursday night into Friday.

A cold front will push across northern Colorado late in the day Thursday with winds turning NNE with upslope developing by early Friday morning. While all models show some accumulating snowfall with this system, there is still a good deal of variance in just how much. At the present time it appears highest totals will favor the Palmer Divide, west and southwest metro areas.

One tool you see us reference a lot during the severe season are the CIPS Analogs, but they offer great tools for winter storms as well. Below is % of the top 15 analogs exceeding 72 hour COOP snowfall >4” valid on 12z Friday. Likely the best percentages I’ve seen for several inches of snow over northeast Colorado this season.

Models have been a complete mess recently, so while nice to see reasonable agreement today, there's still a lot still to watch over the next 24 to 36 hours. Also, even with odds outlined above, not all models are onboard with higher snowfall totals. As of 12z, the GFS (which has been faring pretty well lately) is producing a 1 - 4” event for Denver, with less for Fort Collins, Greeley, while the GEM was closer to 3 - 6” for Denver and 4 - 8 for the foothills west of town. The 18z GFS appears to be narrowing in southern/western Denver seeing higher totals, bringing 2 - 6" to these areas, with the 18z NAM showing good totals for the entire metro area. The EURO, the trusty ol' EURO, came in with a whopping 0 - 2” event for Denver, shunting most of the heavier snowfall north of the Colorado/Wyoming border. Its ensemble wasn't much better, producing 1 - 3" for Denver. So again, nice to see models all agreeing on some snow, but the details are yet to be worked out.

As we’ve been saying over the last few weeks, we really do like this pattern to end the month, the big question was always if any of these systems would align right for us. So far they haven’t. Last week’s storm hit the eastern Plains, this past storm brought feet of snow to the mountains, could this one be our turn?

Temperatures are still set to tumble behind this system, with likely another reinforcing shot of cold air next week. Here’s the GFS 5-day ensemble mean 2 meter temperature anomaly forecast from Dec 26 to Dec 31. Very cold air moving into the middle of the country. 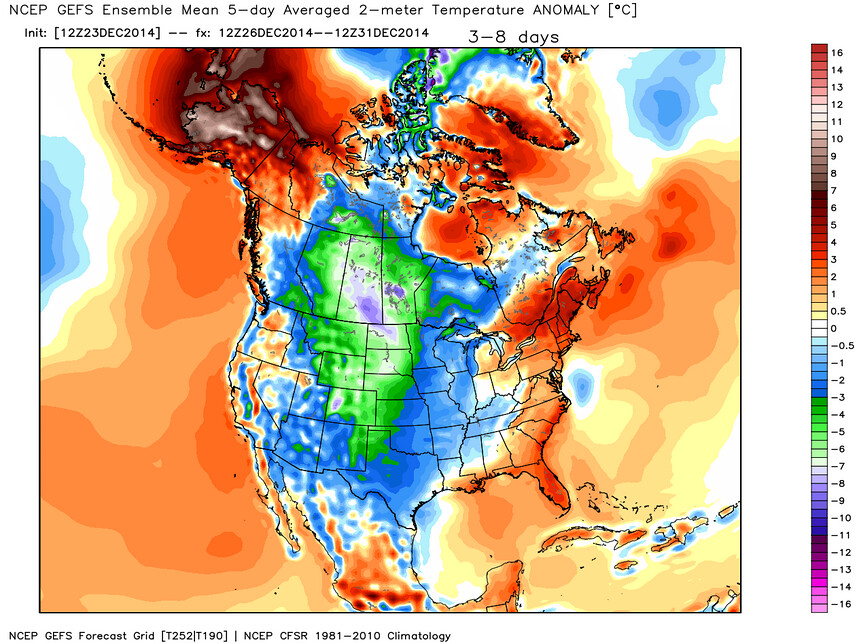 As we discussed yesterday, there’s good agreement between models that we’ll see some snow across northeast Colorado…

Okay you procrastinating Santas, still looking for that perfect gift for your perfect weather geek at home? We’ve…