The evolving El Niño that is going on in the Pacific Ocean has been quite impressive to watch. While we’ve been dealing with a couple variations of El Niño since late last summer (California Niño and Modoki Niño) the event has morphed into a more "traditional" El Niño. All of the orange and red on the map below are indicative of sea surface temperature anomalies that are warmer than normal: 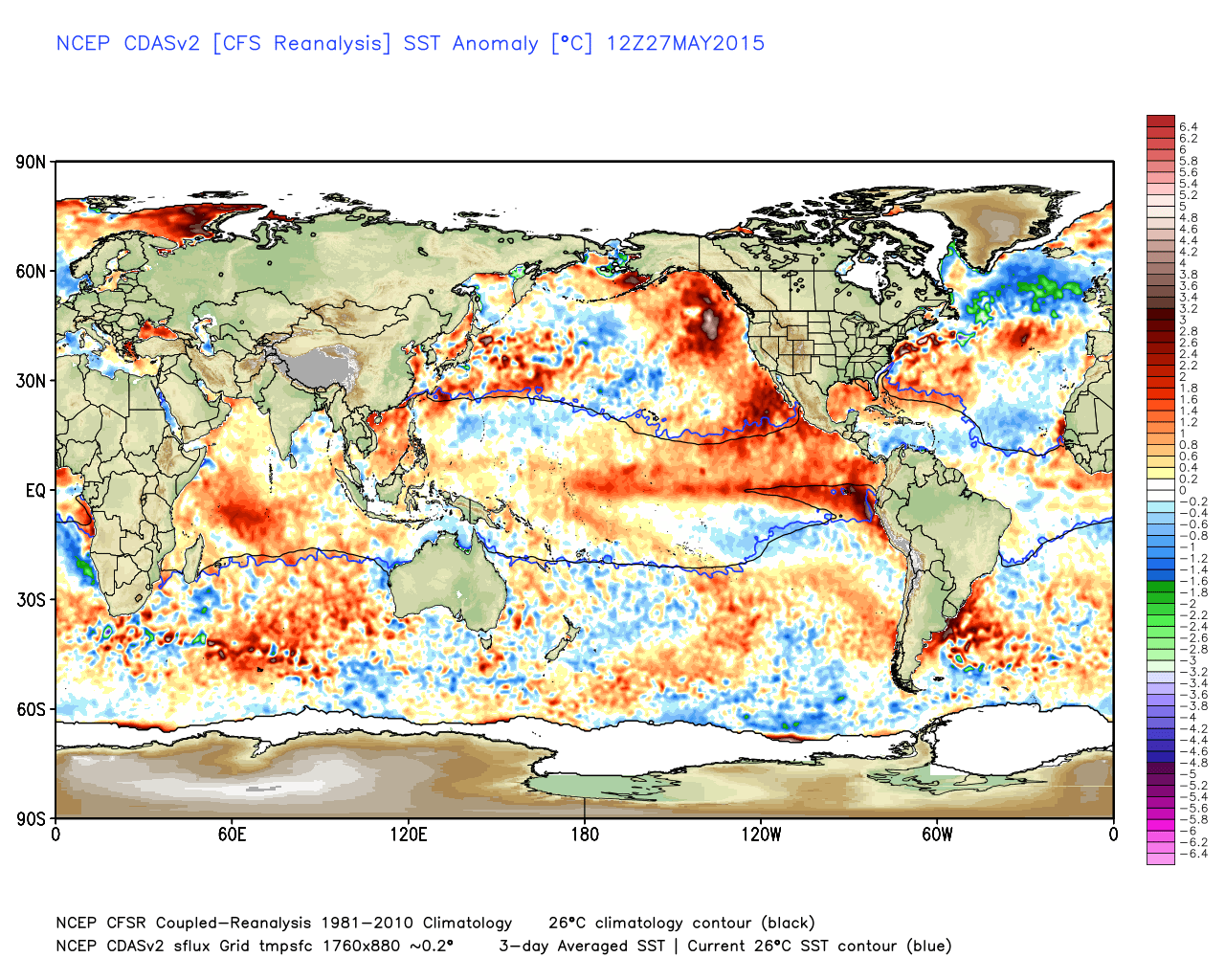 So not only do we have a very positive Pacific Decadal Oscillation occurring (warm pool from Gulf of Alaska down the west coast of North America), but we have a nicely organized "traditional" El Niño occurring. What makes this El Niño "traditional"? Because the warmest ocean water is confined to the central and eastern equatorial Pacific, instead of the central and western equatorial Pacific as is the case with hybrid or Modoki events. As I have hit on many times in the past several months, this was the reason I was so bullish on moisture for most of Colorado. Get a load of the total moisture the Plains have received during the past month: 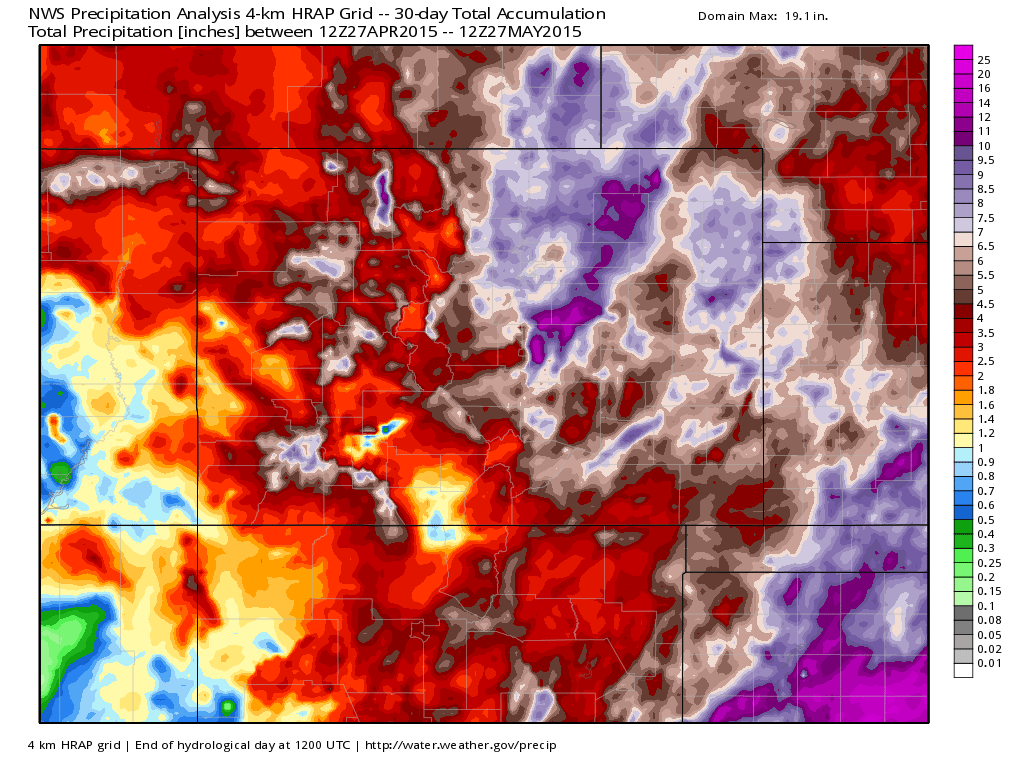 Obviously this isn't news...you know it has been a wet and cool month and you can largely thank that warm Pacific (both PDO and El Niño features) as well as another oscillation for our weather – the Eastern Pacific Oscillation, which has been incredibly negative for a while now. 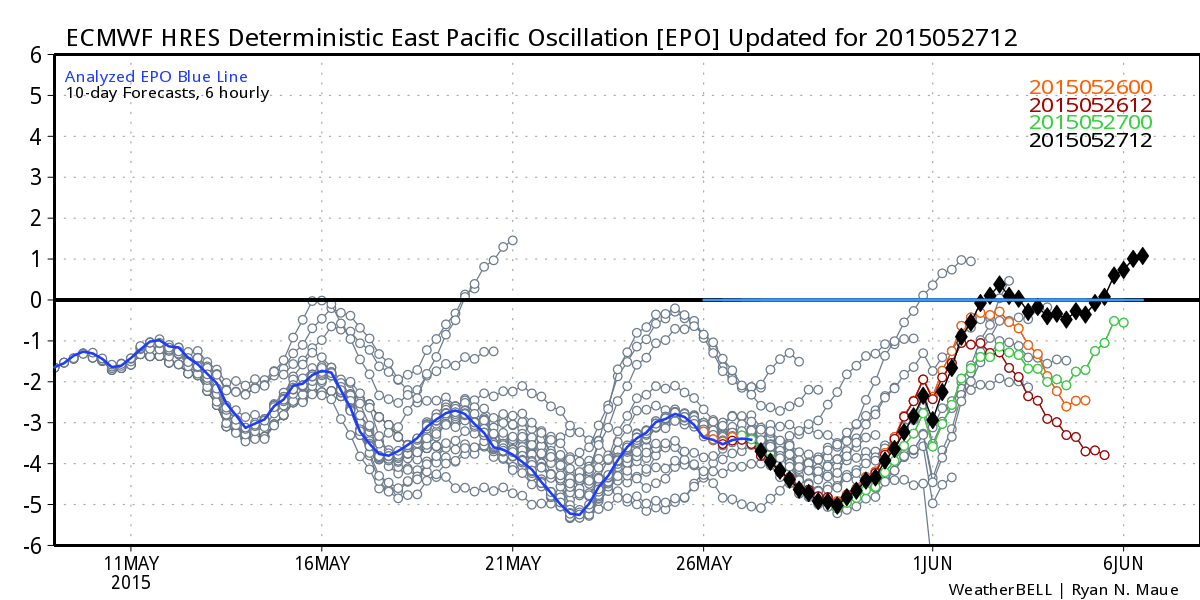 A negative EPO allows cool air to dump southward out of Canada and into the Western United States. As you can see, the forecast is for the EPO to gradually move back toward normal, but certainly not above normal.

All forecast models aside, the wet ground, increased humidity, and a negative EPO should keep us normal to slightly below normal in the temperature department for the foreseeable future. What does wet ground and humidity have to do with it? Wet ground and an airmass that has higher relative humidity heats up much slower and less effectively than dry ground or an airmass with lower humidity. This is one of the biggest reasons why hot and dry begets hot and dry, while cool and wet begets cool and wet. We'll revisit the forecast part of this later...

The interesting things about the El Niño is that it may linger at a moderate to slightly strong state through the end of 2015. The recent ensemble of the models that make forecasts for El Niño looks like this:

The yellow line is the average forecast from all the models. You can see some have the El Niño stronger, some have it weaker, but most of them diminish the intensity of the event by late winter. I believe this may be important for what happens later in 2016, when the Pacific Ocean as a whole MAY start to cool down.

While I still have some question as to how it will play out, my confidence is pretty high that an El Niño of some type (likely traditional morphing back to central Pacific hybrid) and its impacts will last a while. Below are the JAMSTEC model projections for the sea surface temperatures in the ENSO region:

This usually keeps the southern branch of the jet stream active. However, a central Pacific based El Niño in combination with a largely positive PDO would likely develop a rather large ridge across western North America ala what has happened the last two years. I am not saying that is exactly what is going to happen, but it has me concerned. There is a lot of talk about El Niño squashing the drought for all of California this winter. I think some caution should be used here, due to what I just mentioned. So what does this mean in terms of temperature and moisture? Let’s look at the JAMSTEC model and see.

Remember that ridge of high pressure I was talking about above? Look at the western part of the country, warmer than normal for summer and fall, with slight cooling possible for the winter. However, notice where that slight cooling is being projected, farther south where the active storm track may lie. This would leave northern California and the Pacific Northwest warmer than normal and more under the influence of the ridge.

The JAMSTEC reinforces our thinking of a wetter than normal summer, especially for Eastern Colorado. It continues to keep us wet during the fall, which may mean an extended monsoon season. As I have said many times before, I believe the Eastern Pacific hurricane season is going to be very active. The moisture from those storms may play a bigger role than usual in our summer and early fall moisture. This also has me quite concerned about flash flood potential. The JAMSTEC has all of Colorado in white (normal moisture) for the winter months. However, I would expect Southern Colorado to be included in the wetter than normal green shading. This is due to being closer to the active southern storm track.

California
The model shows things moistening up for the state in fall and certainly for the winter. However, the JAMSTEC progged a wetter than normal winter and spring last year for California. While there were BIG storms in December of 2014 and early February 2015, the rest of the time it was very dry, record dry in January 2015. So, if we go back to a central Pacific based El Niño with a very positive PDO, the western ridge may become problematic again despite the JAMSTEC not showing that right now. Something I am watching, anyway. Bottom-line, for me to get really excited about sustained drought relief for California, I would like to see the PDO cool off a bit which would weaken the likelihood of that storm blocking ridge from building again.

Overall for Colorado, I am NOT concerned about drought with this pattern. In fact, it is completely the opposite. I won't get concerned about us returning to the droughty pattern that got us in trouble, until the Pacific cools. When that happens (possibly later in 2016 or early 2017) and it most certainly will happen (as we've said time and again), drought will become a concern again. Until then, enjoy the moisture.