What's Denver's Weather Like in June? Climate Normals and Extremes

June marks the start of meteorological summer, which runs through August. While the month can feature chilly days, the average high temperature climbs 10 degrees through the month ending at a very warm 87° by June 30th. June can be quite tranquil, but also holds claim to some of the city's wildest weather – from snow (yes, snow), to record heat, to hail and tornadoes.

Severe weather
June is severe weather month in Colorado. Nearly every county across the eastern half of the state has seen the most tornadoes in June as compared to any other month. Weld County leads the way, recording 91 tornadoes since 1950 during the month of June. The map below from U.S. Tornadoes shows the greatest concentration of tornadoes in June across the U.S. centered across eastern Colorado and the northern Plains states.

View a larger version of this map on U.S. Tornadoes here.

Of the 724 June tornadoes on record, the overwhelming number of these are F0 and F1 ranked tornadoes. The month can produce stronger tornadoes as well, however, with 45 F2 and F3 tornadoes combined over the 63 year period of record. There have been no F4 or F5 tornadoes on in Colorado during the month of June since record keeping began. 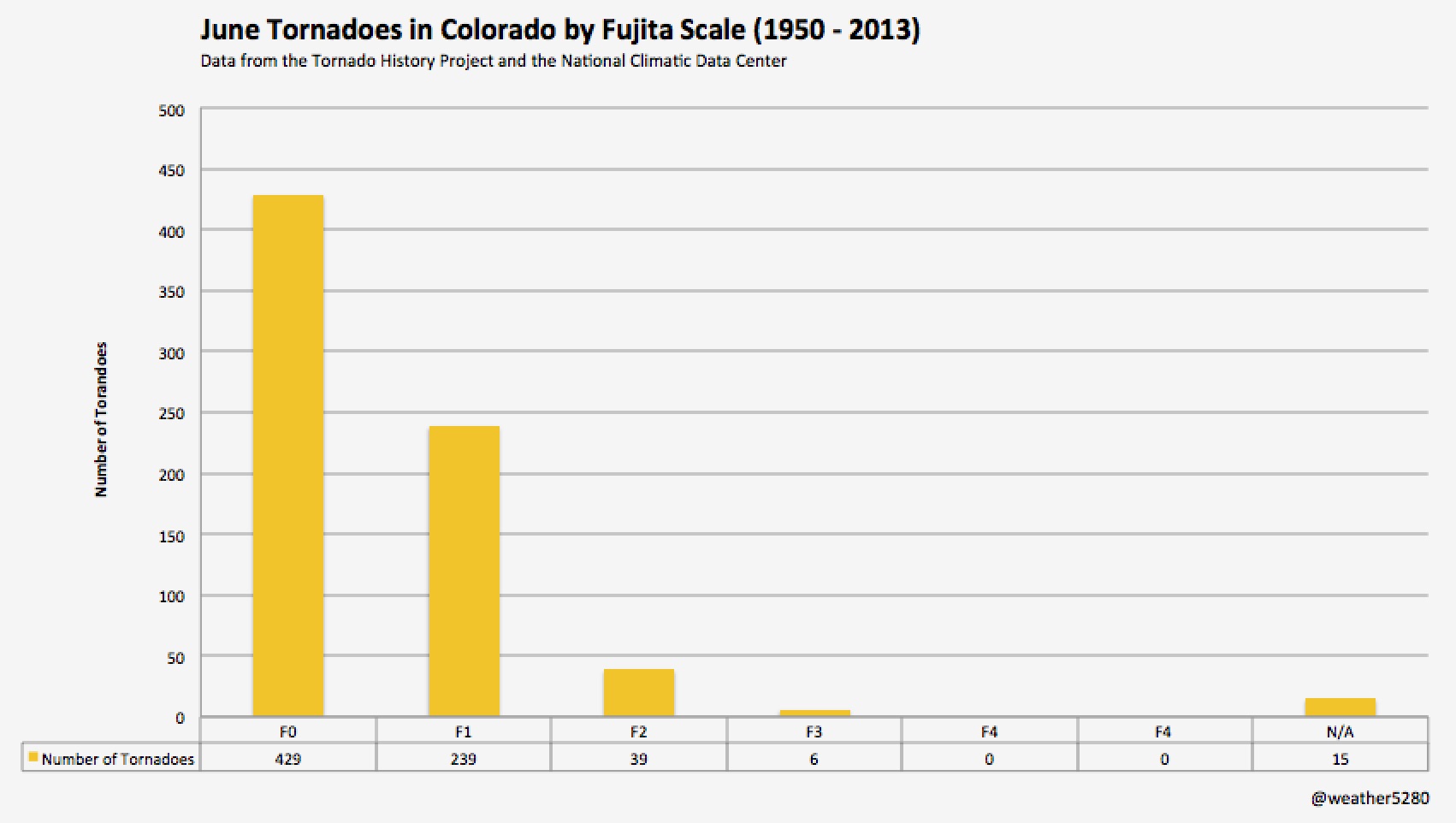 According to the Storm Prediction Center, severe weather probabilities peak during June for northeast Colorado, with the greatest daily probabilities for severe storms coming during the third week of the month. This includes all types of severe weather – from tornadoes, to hail, to wind. 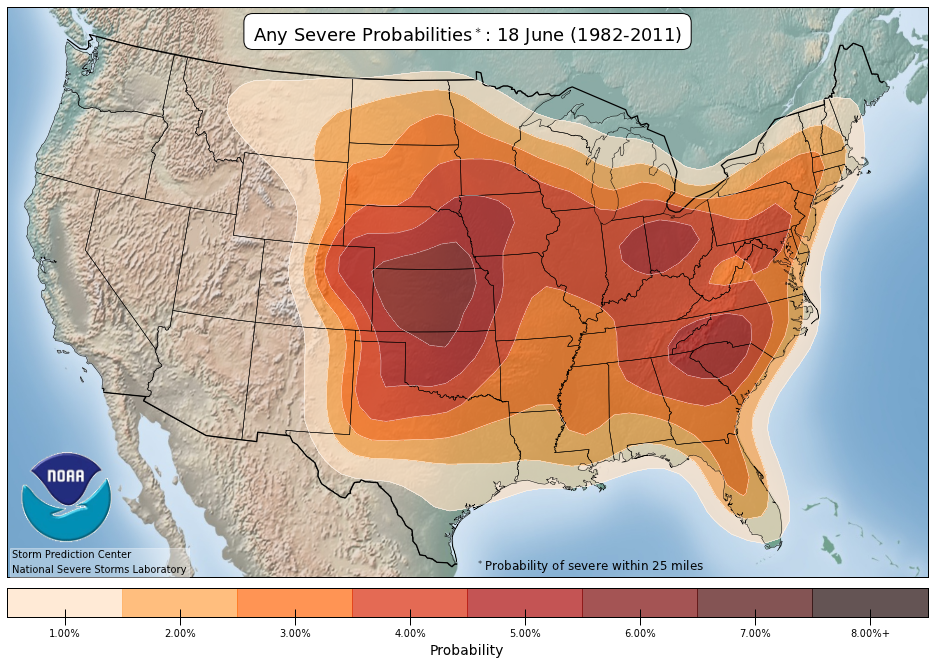 Some of Colorado's most destructive severe weather events have occurred during the month of June. 2015 marks the 25 year anniversary of the destructive F3 tornado that ripped through Limon, CO on June 6, 1990. This strong, and likely one of the more memorable Colorado tornadoes, destroyed most of the historic downtown and damaged over 1/3 of the homes in town. 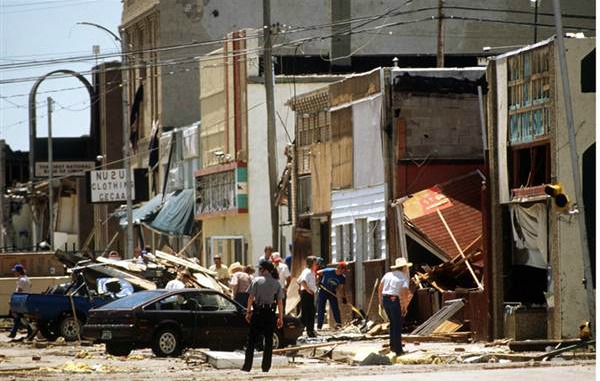 June precipitation statistics for Denver, CO
June remains a relatively wet month for Denver, though drier than both May (the city's wettest month), and July. On average, Denver receives 1.98" of rain in June (1981-2010 data), down from 2.12" in May. 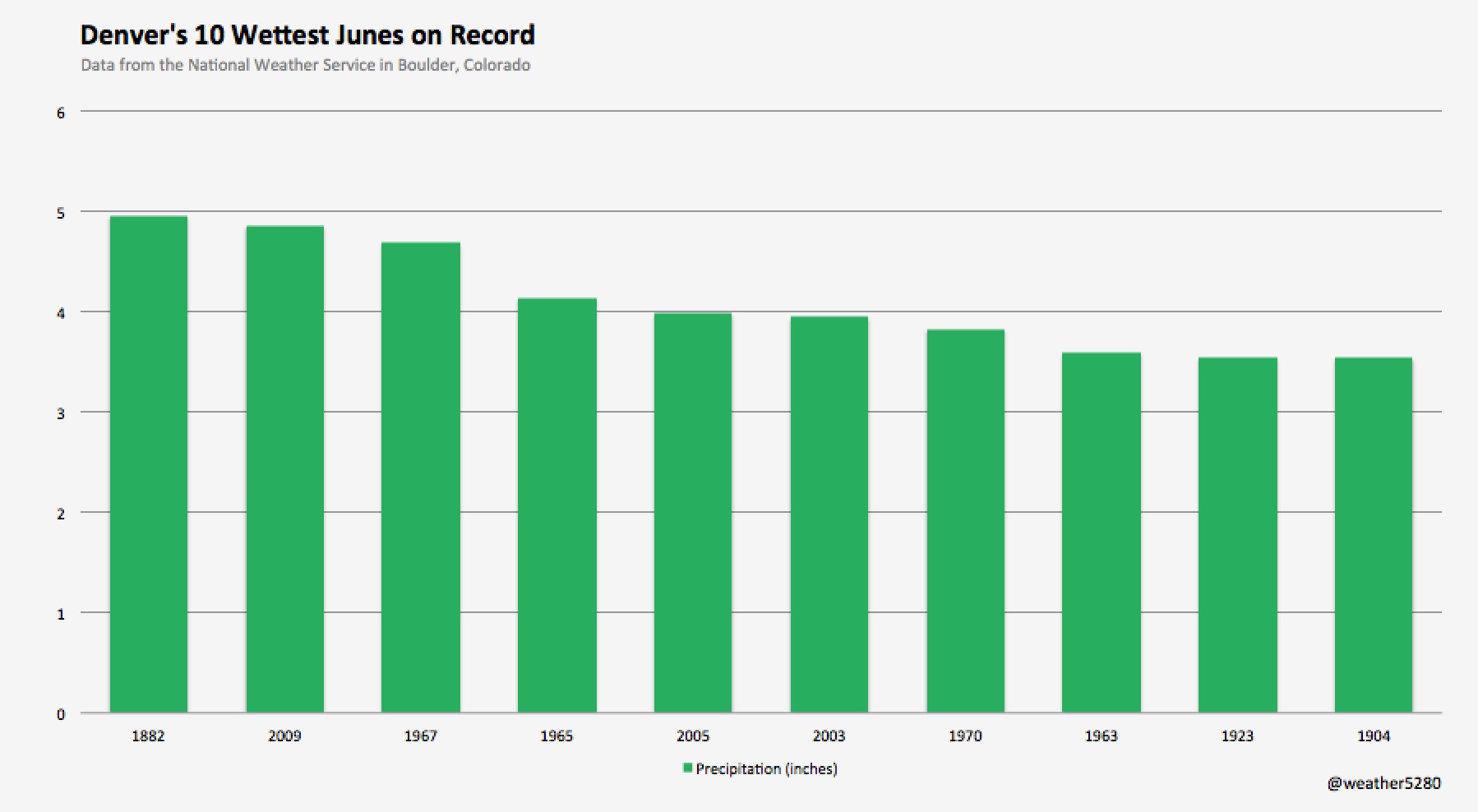 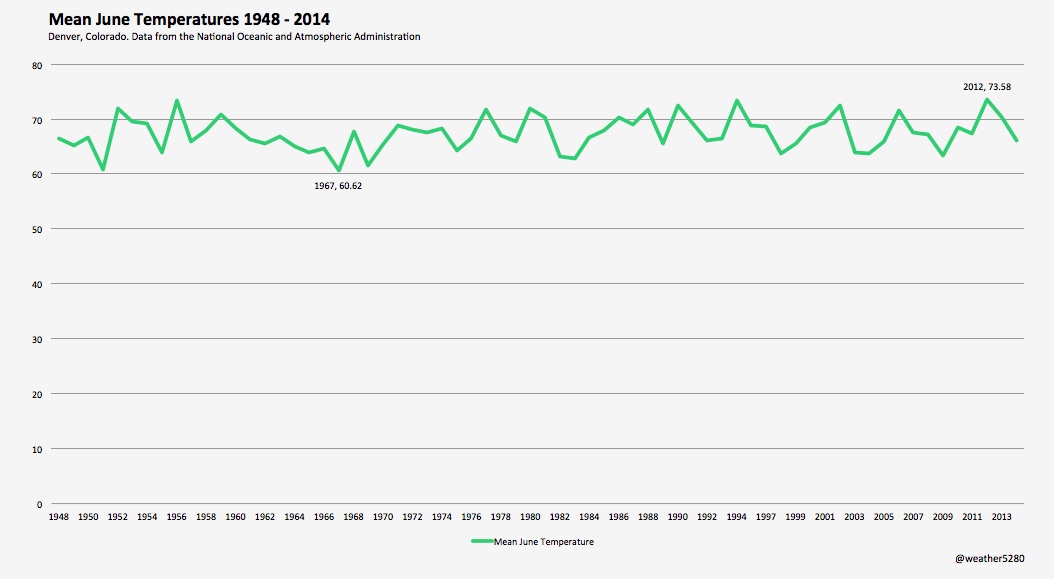 June is a beautiful month in Denver. Still some snow capped mountains to the west, but the threat of snow at lower elevations drops to almost none, while the sunny afternoons get warmer and warmer as we toward the heart of summer.

While beautiful, June storms are often dangerous. Hail, high winds, and tornadoes are all commonplace in June for eastern Colorado, with afternoon storms becoming very reliable at higher elevations as well. With June being the height of severe weather season for Denver and eastern Colorado, always remember to keep an eye to the sky!