Severe storms and flood concerns to end the week
As outlined in this week's State of the Atmosphere our pause from the stormy start to June would be brief. After highs topped out near 90 degrees Tuesday along the Front Range (we managed 92° at Weather5280), temperatures will go down and storm chances up for the second half of the week.

Our next system is swirling across the southwest today, and will eventually push waves of energy into the state through Friday. As this next upper level feature picks up moisture from what was once hurricane Blanca, we expect it to advect this moisture toward Colorado and enhance the threat of heavy rainfall and flooding across the forecast area, particularly Thursday into Friday.

By Wednesday we'll see storm chances increase across the forecast area to about 40% for Denver with highs dropping back into the lower 80s. Thursday will be about 3 - 6 degrees cooler with a better chance of storms, while highs Friday may not make it out of the 60s, with a chance of showers and storms lingering behind a cold front Thursday.

Severe weather outlook
The greatest severe weather threats will come Wednesday and Thursday this week in association with our next system pushing into the state and a cold front Thursday. On Wednesday the greatest threat will be across extreme eastern Colorado and up into northern Kansas, Nebraska, and southeast Wyoming. That being said, can't completely rule out a few strong or severe storms across the metro Wednesday either, as several high resolution models have strong storms developing by early afternoon near Denver before pushing east and intensifying under a better environment for storms.

The current SPC outlook for severe storms Wednesday is below, though I wouldn't be all too surprised to see the Slight (or at least Marginal) outlook extended west a bit closer to Denver with their next update, should more energy become available. 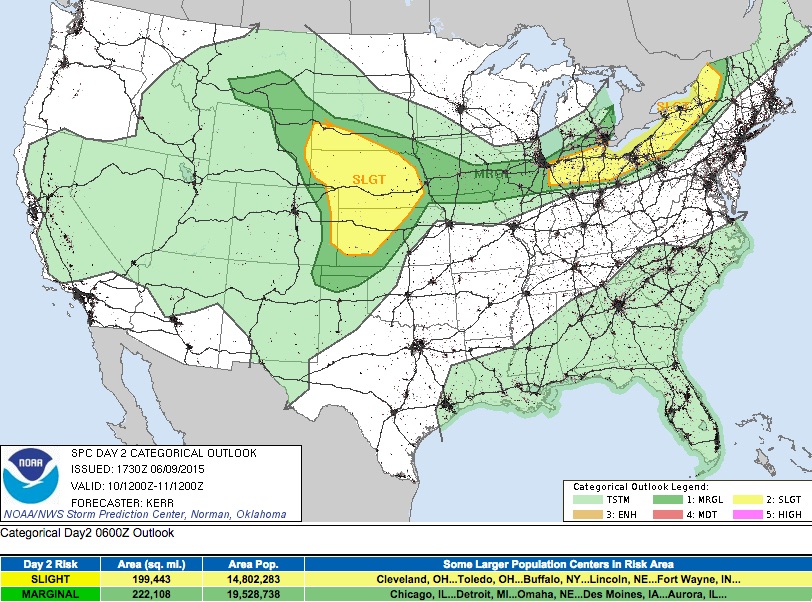 By Thursday I think the severe weather threat increases a bit, though the SPC is sticking with a Marginal risk for that day: 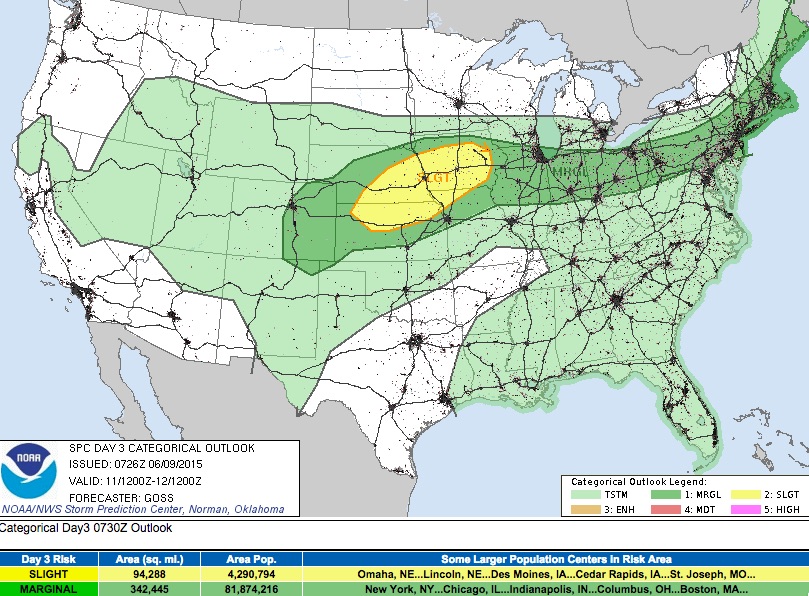 CAPE values will be higher on Thursday (which may be the missing ingredient Wednesday), and should help promote the development of some strong storms across northeast Colorado following the passage of the cold front Thursday morning. 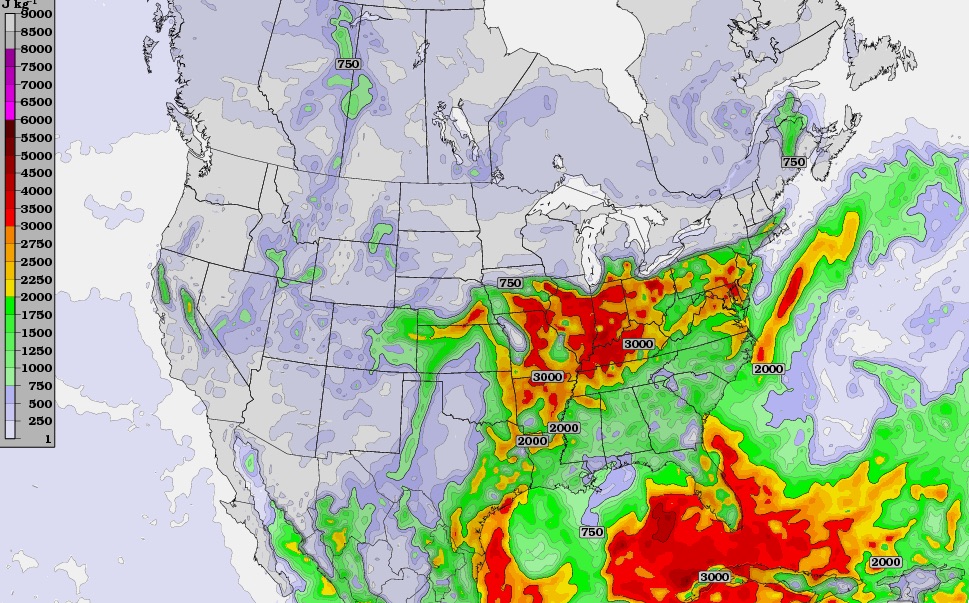 We'll need to keep an eye on the severe weather threat Thursday and adjust the forecast as needed, but for now plan on at least a slightly better threat for storms to turn severe as compared to Wednesday. The other concern for Thursday will be flooding, addressed below.

Flood potential outlook
Our other concern Thursday will be the flood and flash flood threat. The WPC has issued a slight risk for rainfall "exceeding flash flood guidance" for southwest Colorado on Wednesday (there are already Flash Flood Watches in effect here) and central/eastern Colorado on Thursday. While the outlined areas look good, we may, unfortunately, see the probabilities increase for Thursday from where they stand now.

Almost needless to say, but there will be plenty of moisture around to support heavy rains Thursday into Friday, with PWAT values forecast to climb above 1" for northeast Colorado by Thursday afternoon: 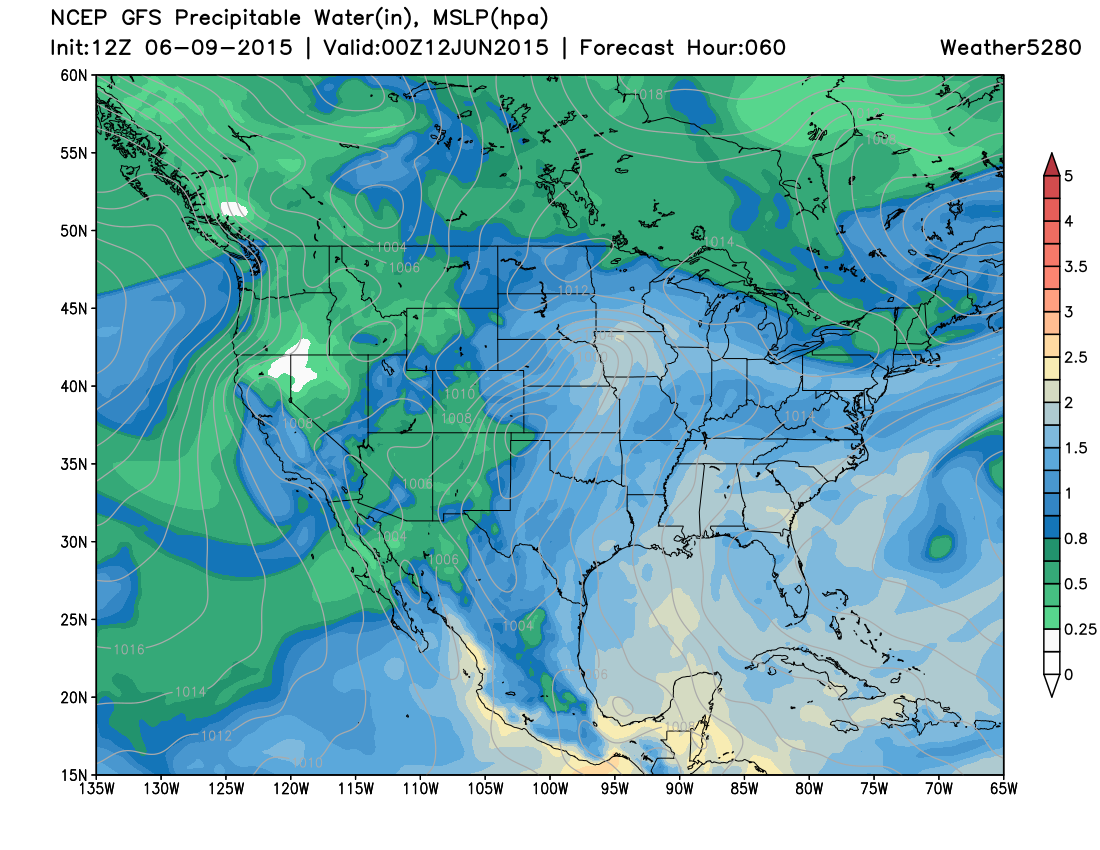 Good agreement between all models at this point that we'll see widespread precipitation with this event, with models generally producing 1 - 1.75" QPF Thursday into Friday. This kind of moisture with the already saturated grounds we're dealing with have us concerned about flooding. Expect storm motions to slow Thursday evening, and likely see some locales see >2" of rain with the heavier storms. If you live in the Front Range foothills and across the Palmer Divide, please stay tuned here and to local media/NWS for the next several days.

Below is the 12z GFS (left) and NAM (right) precipitation forecast through Friday. Both show widespread totals >1", with a focus of heavier totals for the foothills and Palmer Ridge. Keep in mind that these models aren't going to do a great job a picking out individual cells that will produce higher/localized totals, but this should give a general sense for what we're looking at Thursday. Some indication that the heavier cells will be capable of producing >3" of rain if they stay parked long enough.

Still some time to see how things will shake out Thursday into Friday, but with the potential for heavy rainfall we wanted to get that on the table. We'll se how things look in another 24 hours, after Wednesday's storm threat has subsided.

Of course we'll stay all over things here at Weather5280, and bring you the latest on this active forecast as needed. If you're not subscribed to receive email updates, please do so now.