The Record-Setting Rains that Erased the Drought in Texas

May 2015 was a blockbuster month for Texas rainfall after years of drought with very little intermediate relief. Texas began the month of May with 41% of the state classified as experiencing drought conditions according to the U.S. Drought Monitor. By June 2nd (the first available report after the end of May) just 9.18% of the state remained in this category, with only 0.68% considered Moderate Drought or worse. 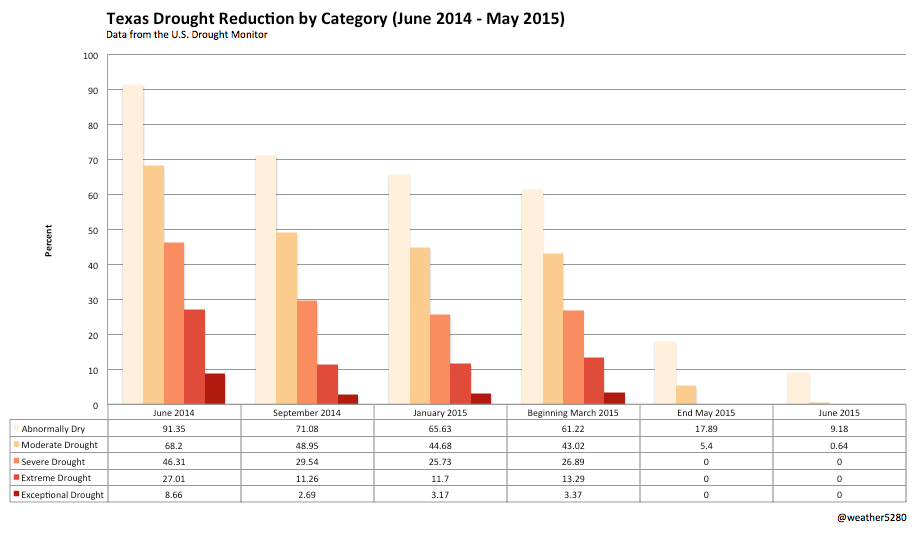 If we take a look at CoCoRaHS data from the last 5 years it is very telling in just how impressive this last month was. CoCoRaHS is a community weather reporting network, providing data from members on rain, hail and snow all over the United States. There are now over 1,400 members distributed across Texas, providing a nice snapshot of daily precipitation for the state.

The graphic below shows the monthly precipitation totals for each CoCoRaHS reporter between January 2010 and May 2010. In all there are over 86,500 data points analyzed here. Note that outside of a few wetter months (September, 2010) most months the overwhelming number of reports are <4". In May 2014 we saw a moderate rainfall year but not enough to erase the drought. From March 2015 through May 2015 things got progressively wetter as the weather pattern finally flipped – first in the east, and eventually further west. Many CoCoRaHS stations recorded >15" of rain this May.

Wettest month on record for Texas
May 2015 was wetter than any of the previous 65 months in Texas with a statewide average precipitation tally of 10.43" based on the CoCoRaHS data above (see NOAA below). The next wettest month isn't even close, logging 7.17" back in September of 2010. The long-term monthly average between January, 2010 and May, 2015 was just 2.26". The average May precipitation over the same years was 3.43", meaning May 2015 saw over 300% more precipitation than the last five Mays on average, and almost exactly the same amount of precipitation as the last five Mays combined (16.89").

It's worth noting that according to NOAA data the statewide precipitation number is a little lower than calculated from CoCoRaHS reports above. However, at 8.93" May still officially ranked as the wettest month on record for the state, breaking the old record of 6.66". 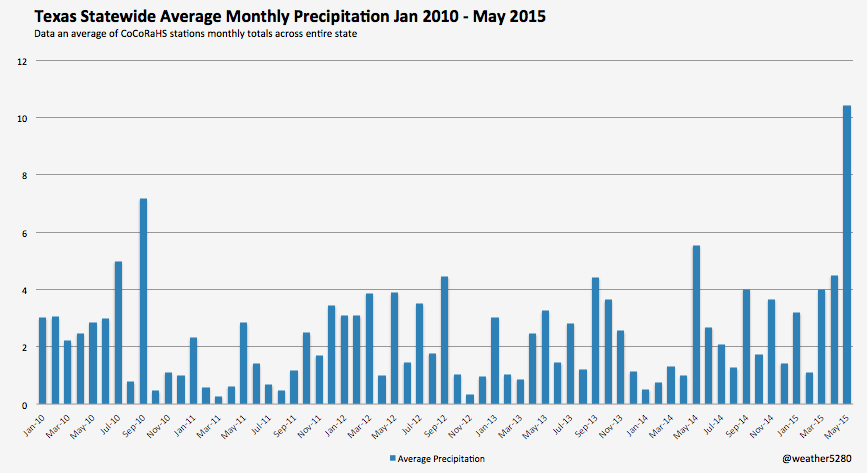 Many Texas cities also not only saw their wettest May on record, but also their wettest month on record. The Dallas–Fort Worth metroplex saw nearly 17" of rain with 16.96" recorded officially. This not only breaks the old record for the month of 13.66" set in 1980, but also sets a new record for monthly precipitation for the city. The average precipitation for May is 4.9" for DFW. 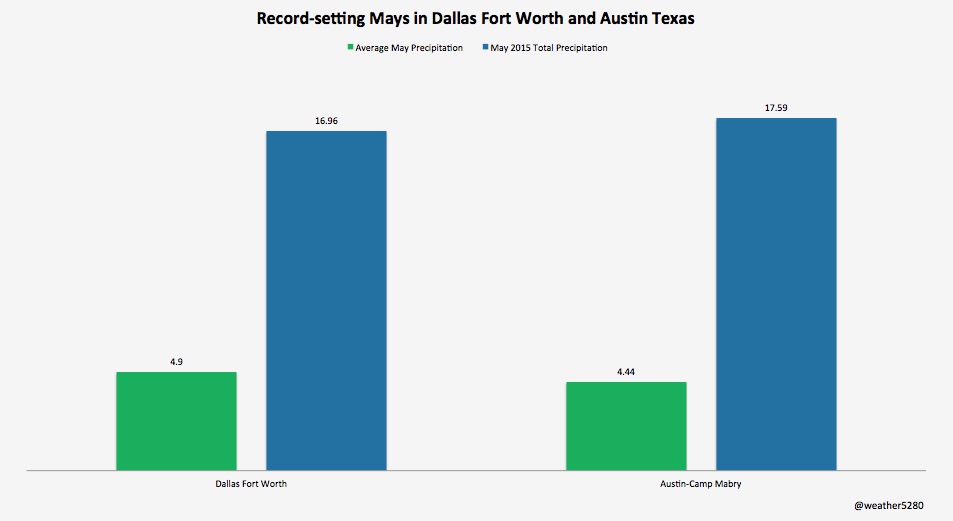 Year of drought recovery for south-central U.S.
While drought conditions persist in the west, those living in eastern Colorado, Kansas, Oklahoma, Texas and eastern New Mexico have seen incredible drought improvements over the last year, largely thanks to April and May 2015.

The overall pattern appears to be drying a bit as we head into the second half of June, but that's not before a huge start to the month across the region. Many locations across eastern Colorado have already seen more than double their normal June precipitation, with Oklahoma and Texas again dealing with flooding rain as tropical storm Bill moved through on June 16th and 17th. Here's a look at month-to-date percent of normal precipitation totals for the U.S.: 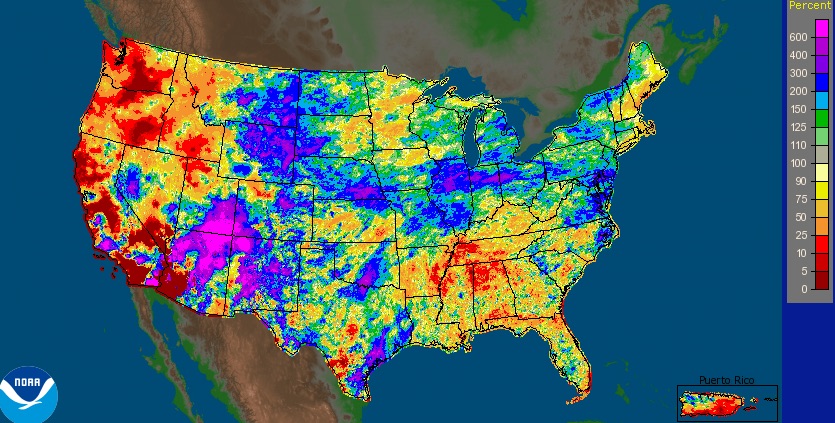