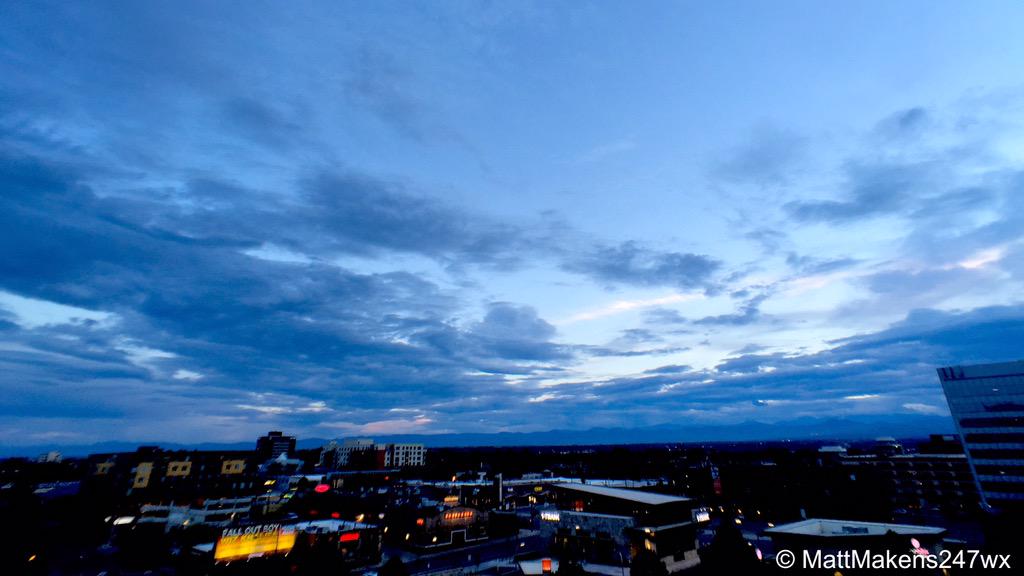 Can you feel it? A big cool down arrived lat this afternoon, and with a reinforcing shot behind it, we'll stay well below normal across much of Colorado for the start of the week. The cool air working our way is very evident in the latest RTMA analysis this evening: 50s, 60s, and 70s across Wyoming and spilling into northeast Colorado. 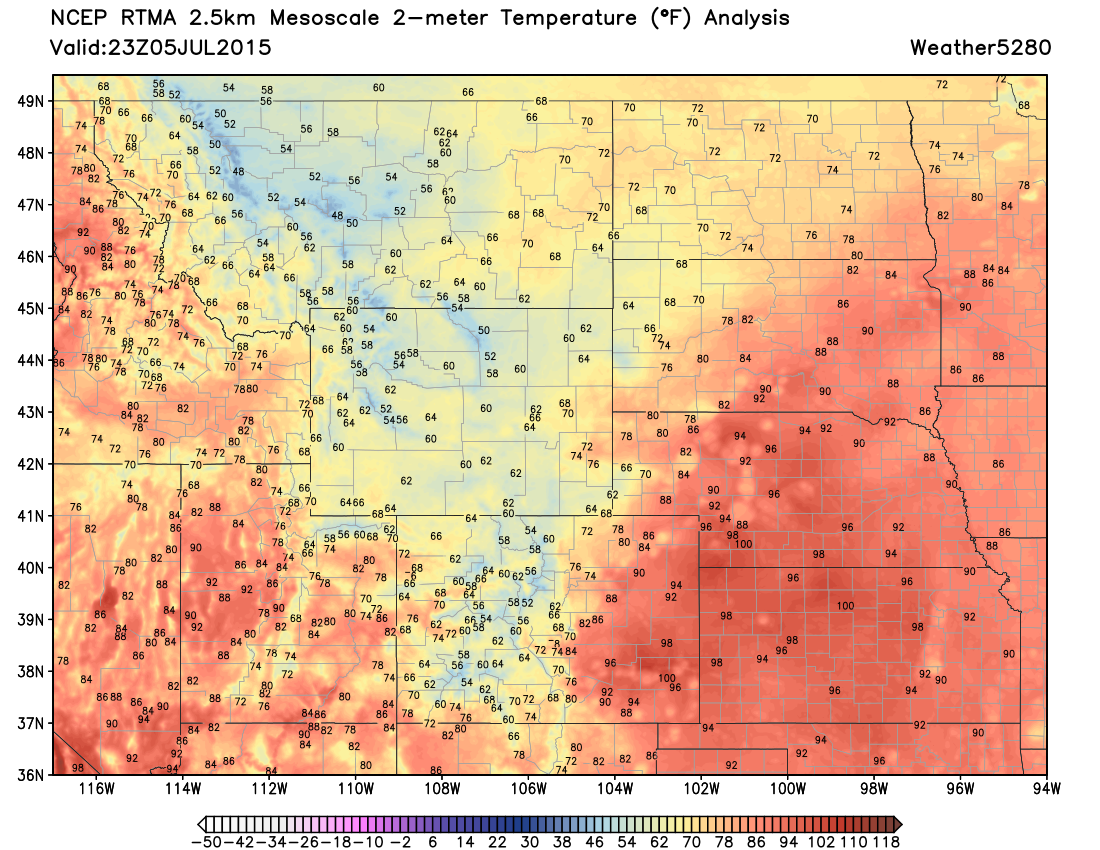 The changes coming are impressive. Taking a look at the 24 hour temperature change across the United States shows temperatures from 20 to 40 degrees colder across the northern Plains Sunday afternoon as compared to Saturday. 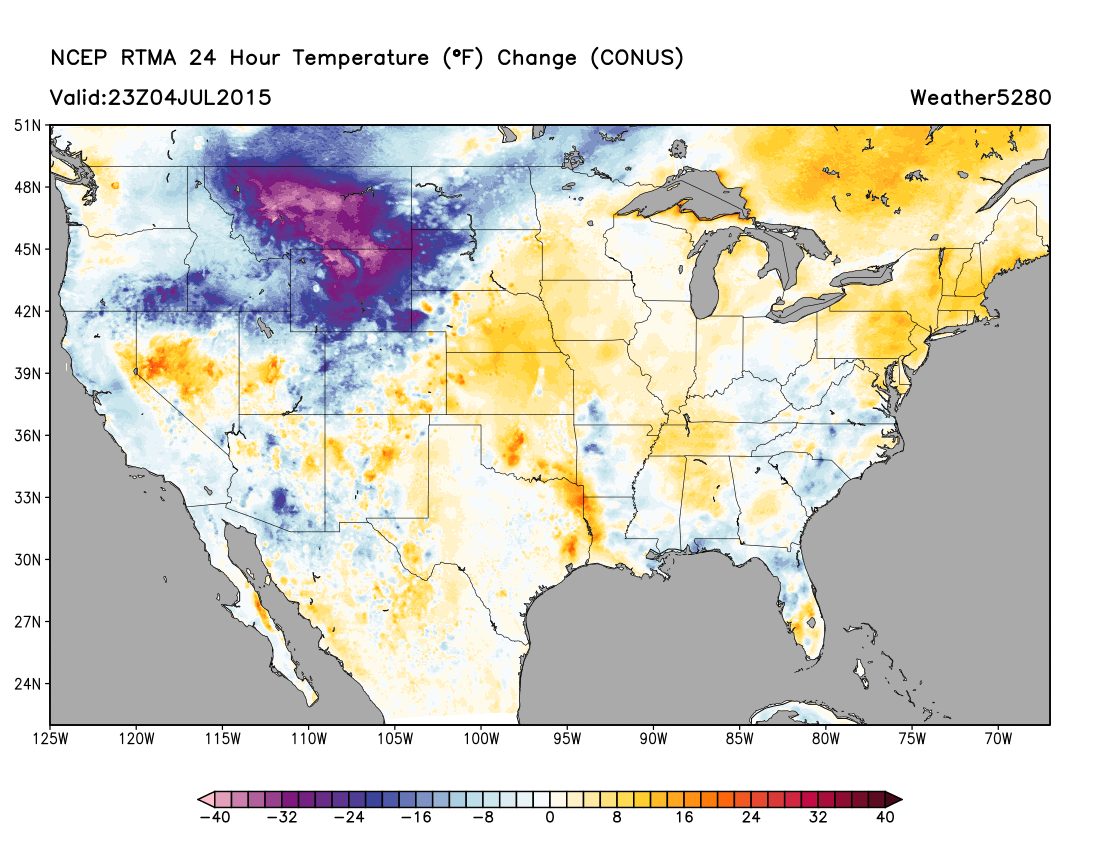 Storminess increased to close out the holiday weekend and there are a number of storms yet to come through the week. Further, the week will definitely have a different feel to it – literally. As the cold air moves in from the north.

Ocean-Atmosphere teleconnections first indicated this change about 10 days ago. The EPO signal cooled greatly, suggesting colder air available, for this time period. The PNA index also shifted colder indicating a trough could develop over the western US. And as forecast in last week's SOTA, both that signals have panned out, and now we impacted by those ocean changes from weeks ago.

The week ahead
Here’s the setup for what will be the stormy and cooler workweek. First, a high pressure area is over the southeastern U.S. and a weak trough is over the western U.S. Second, a cold front is diving southwardly into the state. These two features will drive the quite notable flip back to colder than average temperatures and stormier conditions.

In our position, relative to the ridge and trough, we are receiving a plentiful supply of humidity from the desert southwest and Mexico. This Pacific and Gulf moisture moving into the state is the monsoonal flow. This boosts our rain potential, and raises concerns for flooding under the right conditions. There had been flash flood warnings in Wyoming Sunday afternoon, which should raise our awareness to that threat also.

The cold air arriving through Monday will combine with the monsoon to increase the rain potential. The cold air will act as a lifting mechanism, shoving warm air above it, as it slides through. That lift to the warm/humid air will result in widespread cloudiness and rain chances. The movement of the cold air will have some upslope component to it also, therefore helping add to the lift. The heaviest rain will be where that lift is greatest... our foothills to the west of I-25. 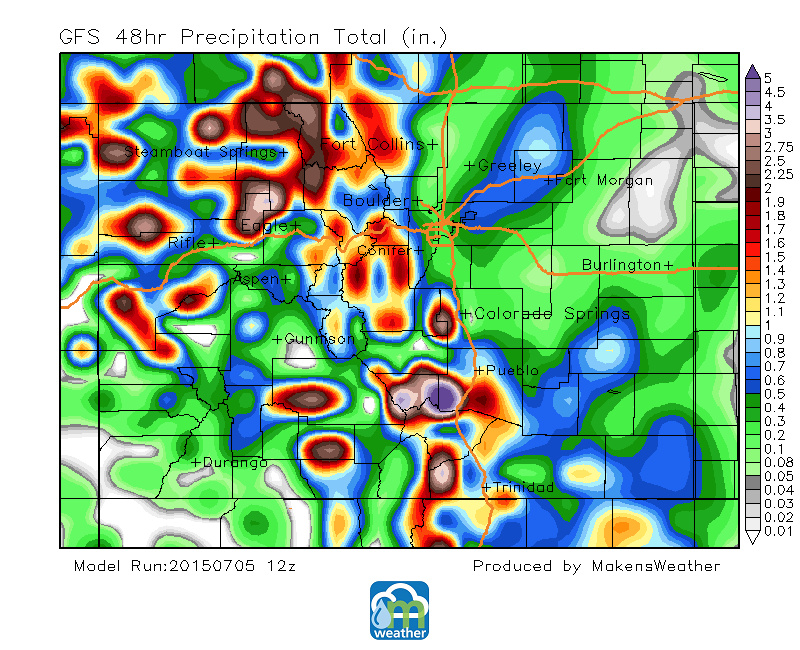 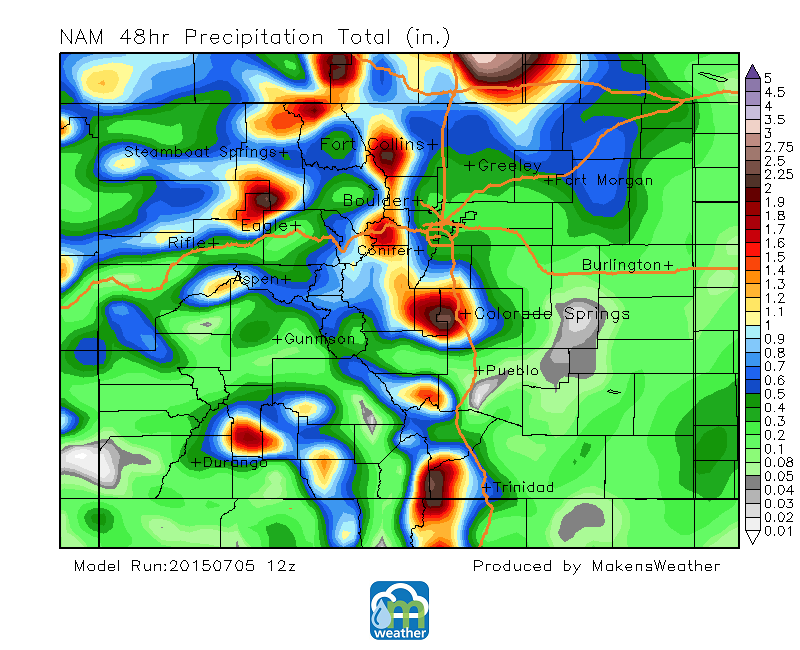 Yes, those projected higher rainfall amounts are in vulnerable flood prone areas – Waldo Canyon west of Colorado Springs for example. The latest flash flood guidance lists a threshold from 1.5” to 2” one-hour rainfall, or a 2.5” to 3” six-hour rainfall, to create flash flooding. We do not see short-term rainfall totals that high in the model output, which is obviously good news; although, 2-day storm totals may reach those amounts.

Looking into the probabilities for even an outlier chance we see more good news. SREF 12-hour probabilities for 0.25" rainfall amounts remain very low-to-nil. We'd show you the same for 1" rainfall, but it's a blank map. So, those flash flood guidance numbers mentioned previously remain higher than the model's outlying amount. 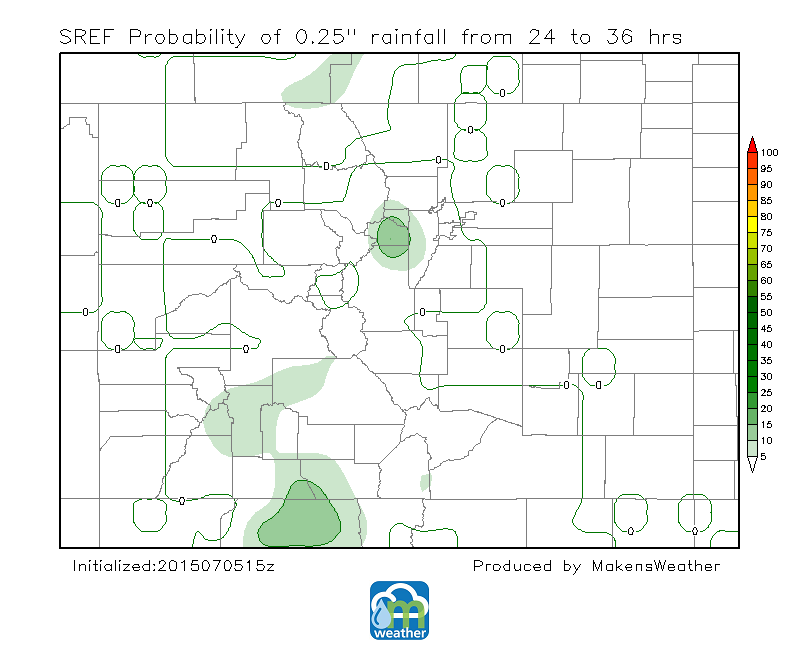 I will add, at this point, some caution regarding the potential. A stalled colder air mass over the northern Front Range could cause stationary storms with higher rainfall rates than currently projected, and therefore flooding. This is simply a cautionary statement, as there is very little evidence in any modeling to suggest that is a possibility as of this posting.

We will obviously keep an eye on any changes to the rainfall potential and will keep you updated on the forecast this week. I hope you enjoy the cooler days to start the week; I know I will, just the change of pace.

This monsoonal flow won’t likely change much between now and the mid-week. However, the global models show that the ridge will move into and build over the state by next weekend. That will move the monsoonal flow away from us and will drop the rain potential.

Here's a look at the GFS, ECM, and GEM output for the 500mb pattern for Monday, which shows the position of the trough to our west and ridge to the east. 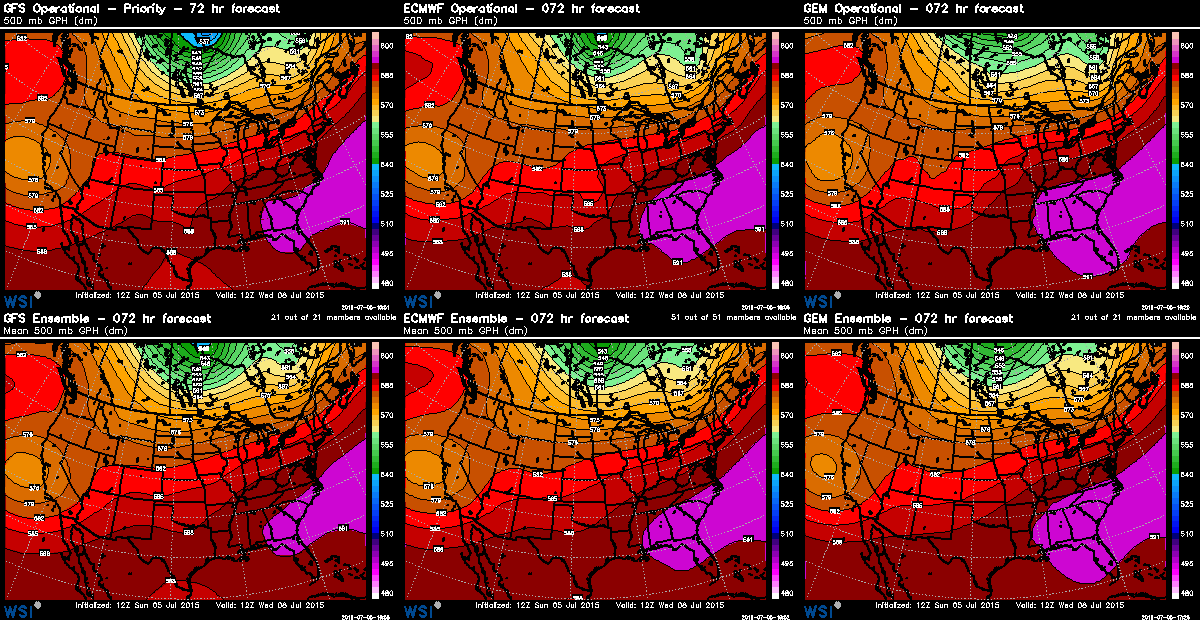 Notice how it has changed by next weekend. The ridge builds in, varying strengths and positions between the three models, and this will cause our monsoonal flow to be cutoff for a time. 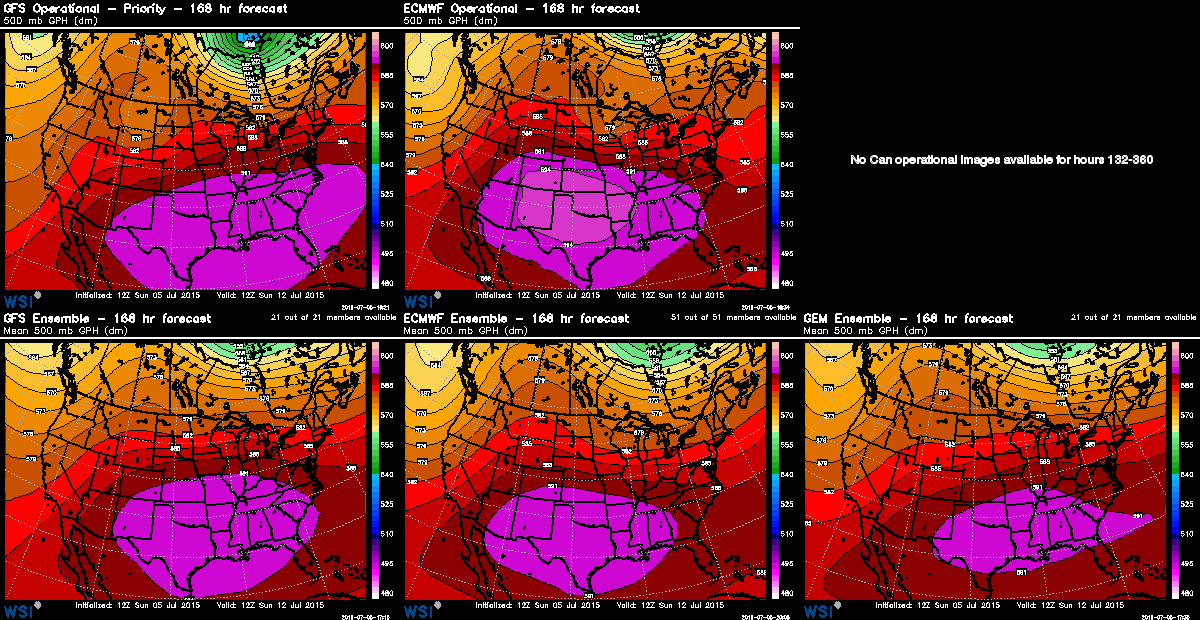 Temperatures will also rebound gradually through the end of the week into next weekend. We may be back above average, toward 90, by then.