We had a warm month forecast for the eastern two thirds of the country, but not warm enough for the middle of the country. Take a look at our September temperature anomaly forecast from August 15 (top), compared to month-to-date anomalies (bottom): 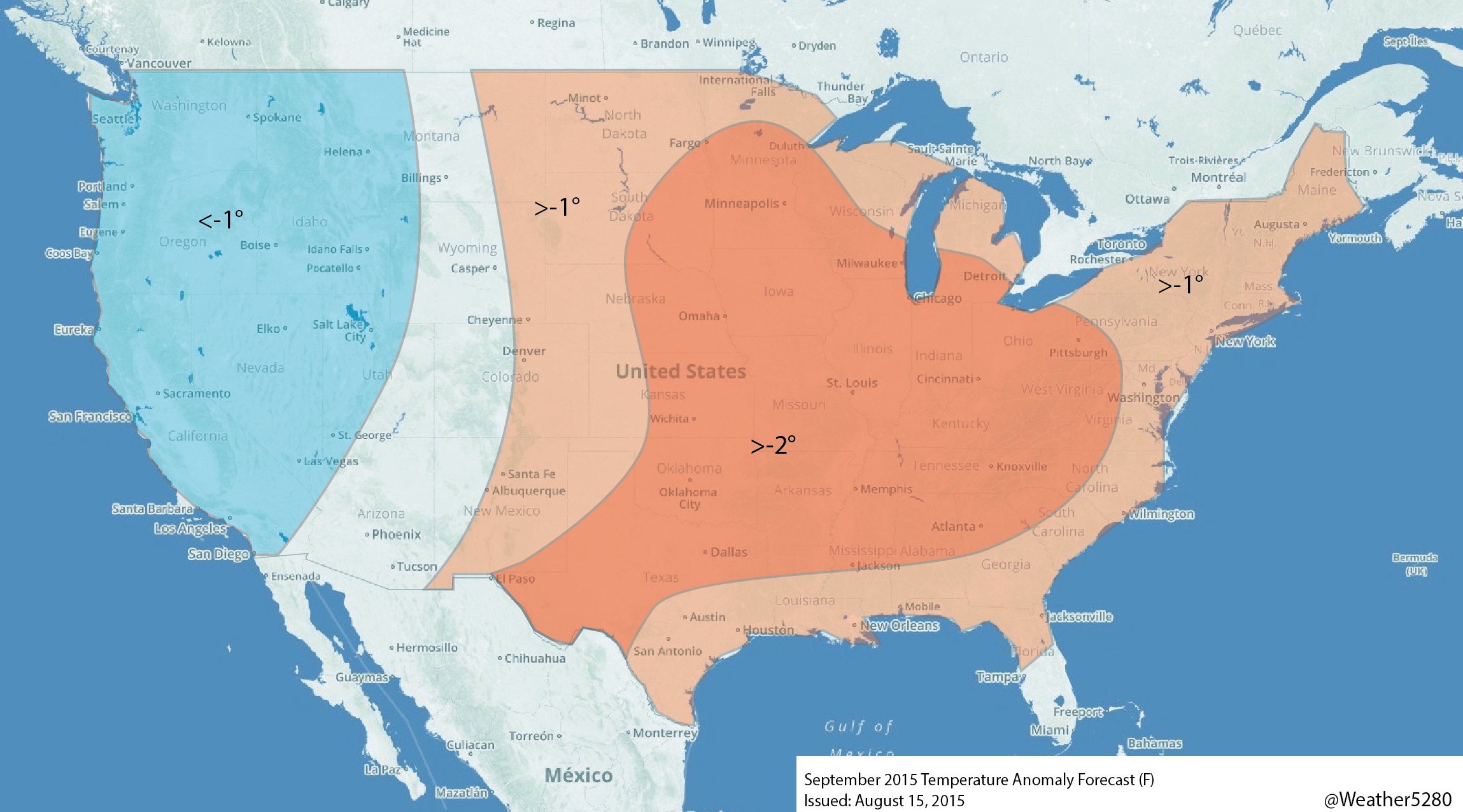 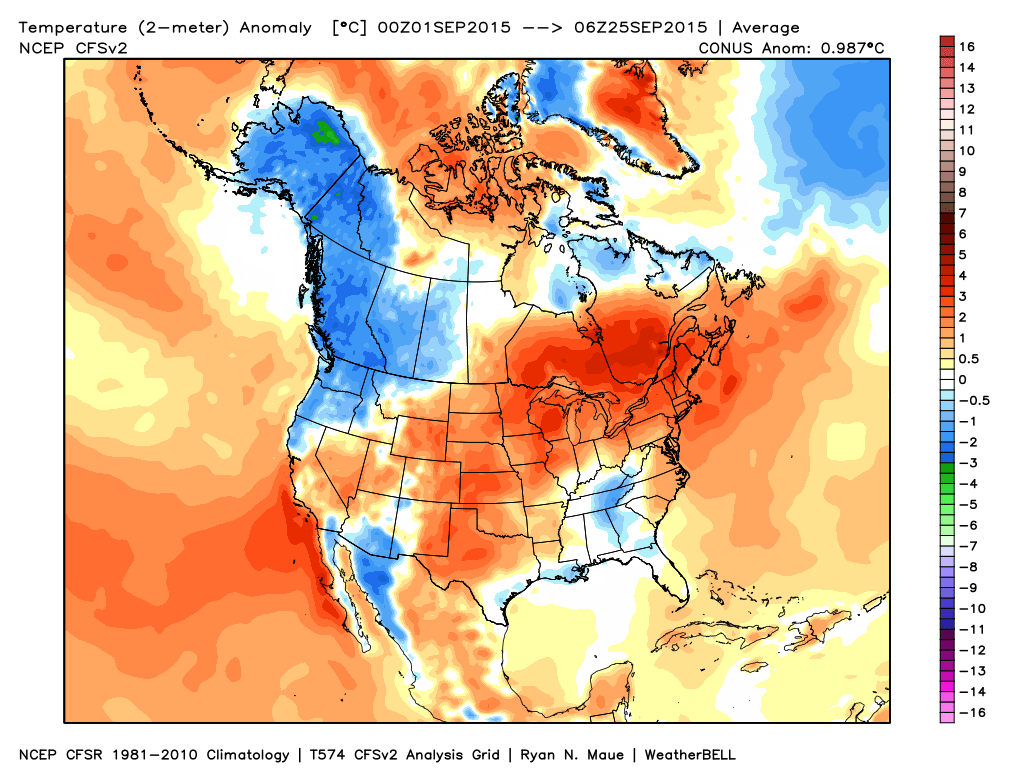 Overall we had the right look, though some warmth has worked back into the southwest more than what we had, and the southeast hasn't been as warm. For Colorado, we had eastern portions of the state above normal, and western near normal – in reality, we could have had the entire state well above normal.

At Denver International Airport, the average temperature so far this month is 69.6° F, a remarkable 5.3° above normal. This makes this September the warmest on record by more than one degree – the previous record warmest September occurred in 1948, with an average temperature of 68.3°. While we do have a cooler day on the way Tuesday, it looks like the month (which ends Wednesday) has a good shot at remaining the warmest on record.

Here's a look at high and low temperatures so far this month at Denver International Airport as compared to the normal high/low for each date. Only a select few highs and lows below normal... 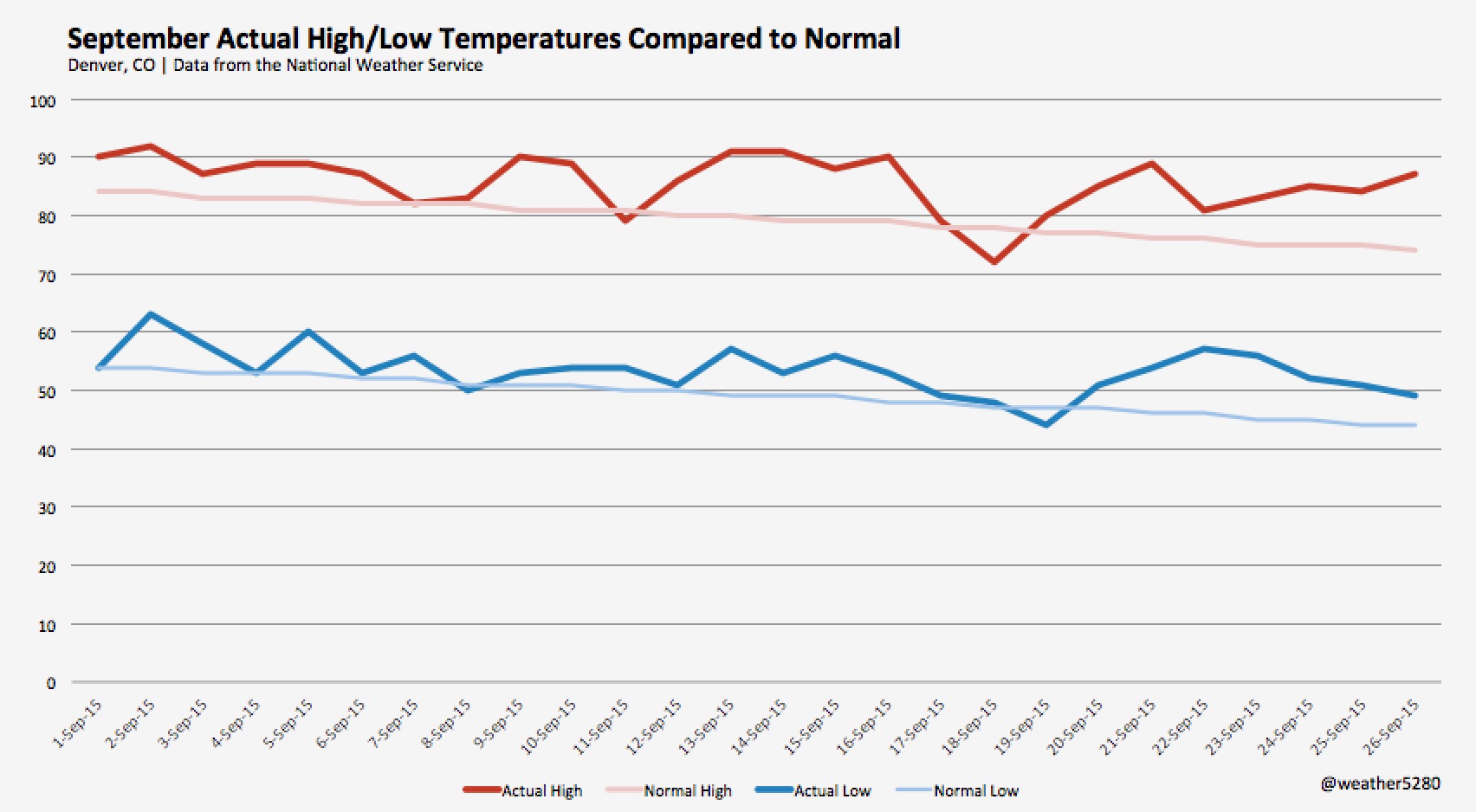 The recent dry weather has also increase fire risk across the region, with the U.S. Drought Monitor placing 25% of the state under Abnormally Dry classification, up from 10.51% the week prior. Luckily we had such a wet spring and early summer, otherwise the failed monsoon + dry hot September would certainly have us in a much worse position.

Changes in sight?
Everyone wants to know, how long will this record heat last? It appears, awhile longer, though some hints of change are on the horizon.

The week ahead will start very warm. Highs Monday will again be >+10° above normal with highs once more in the mid to upper 80s across the metro area. Even Tuesday, which is forecast to be much cooler (highs in the mid 70s) will be above normal. The average high to end September is 72° in Denver, and the average low is 42°. Last night the temperature bottomed out at a warm 54.7° in the city.

Monday evening through Tuesday we'll have a better chance of showers and storms across eastern Colorado than we've seen in some time. The NAM/GFS/EURO are all showing spotty measurable QPF across the region through Wednesday, with rainfall totals ranging from just a trace to ~0.5" across eastern Colorado, with better rainfall chances at higher elevations west of I-25. 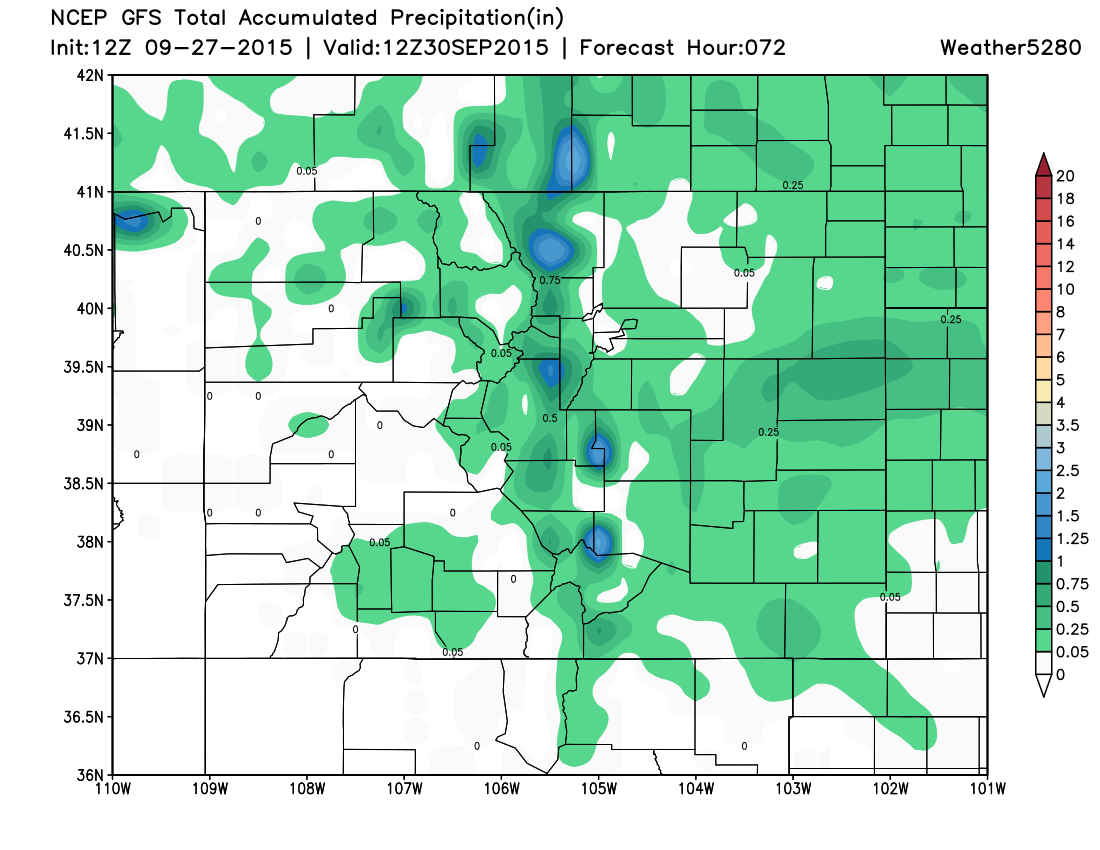 We'll warm things up and dry things out by Wednesday with sights then set on our next system due in to end the week and into next weekend. Some bigger questions with this next system and its eventual impacts on Colorado as models are a bit all over the place.

There will be an upper level feature moving across the northern Plains which should increase the northwest flow into eastern Colorado, cooling temperatures and potentially introducing a better chance for rain once more. There has been a tendency in the modeling to keep the track a bit too far north to bring much precipitation to the metro areas, but this is something that will need to be watched. The 00z EURO brought heavy rainfall to the northeast Plains of Colorado, while the 12z run kept most of the moisture northeast of Colorado. The GFS went the other way today and, FWIW, is running much colder and wetter today with this weekend's system than it has been. Lastly, the Canadian, is dumping heavy snow across the southern mountains, with heavy precipitation progged for south-central/southeast Colorado. A lot to watch here, for now will introduce cooler temperatures by Friday and add a slight chance of showers and storms as well heading into the weekend. Plenty of time to see how this system will progress.

The ridge looks to build back in by the end of the weekend or early next week if only briefly, with ensembles suggesting more troughiness in the west for next week as well, though at the moment nothing terribly cold looking considering we'll be entering the first full week of October. Going forward it looks like we'll have more warmth to contend with, though the pattern overall looks more transient overall.