Monsoon Fail and a Look at October

Before we move into October, here is a thought on the late summer: I have to admit that there were a lot of things I thought would happen this year with the warm Pacific and subsequent El Niño, but a failing monsoon wasn't one of them. Historically, an El Niño will enhance the monsoon season for Colorado and certainly doesn't scream drought. However, I attribute the "monsoon fail" to a very weak MJO (Madden Julian Oscillation) signal and one that simply got stuck in a rut that perpetuated that weak signal. Check out the diagram below: 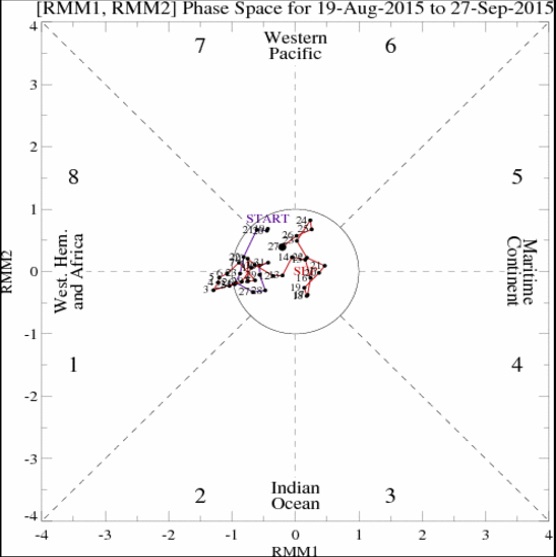 Remember, the closer "the lines" are to the center of the diagram, the weaker the signal. While the Central and Western Pacific have had a very active typhoon/hurricane season, the far Eastern Pacific has been very quiet. I also blame the weak to non-existent MJO for this, thus robbing us of a lot of tropical moisture that can move northward from The Baja and Mexico. So, for the past month we have had virtually no MJO activity. Why was it the warmest September on record? I believe the much drier soil (as compared to spring and early summer), the very warm Pacific Ocean, and the strong El Niño all played roles. 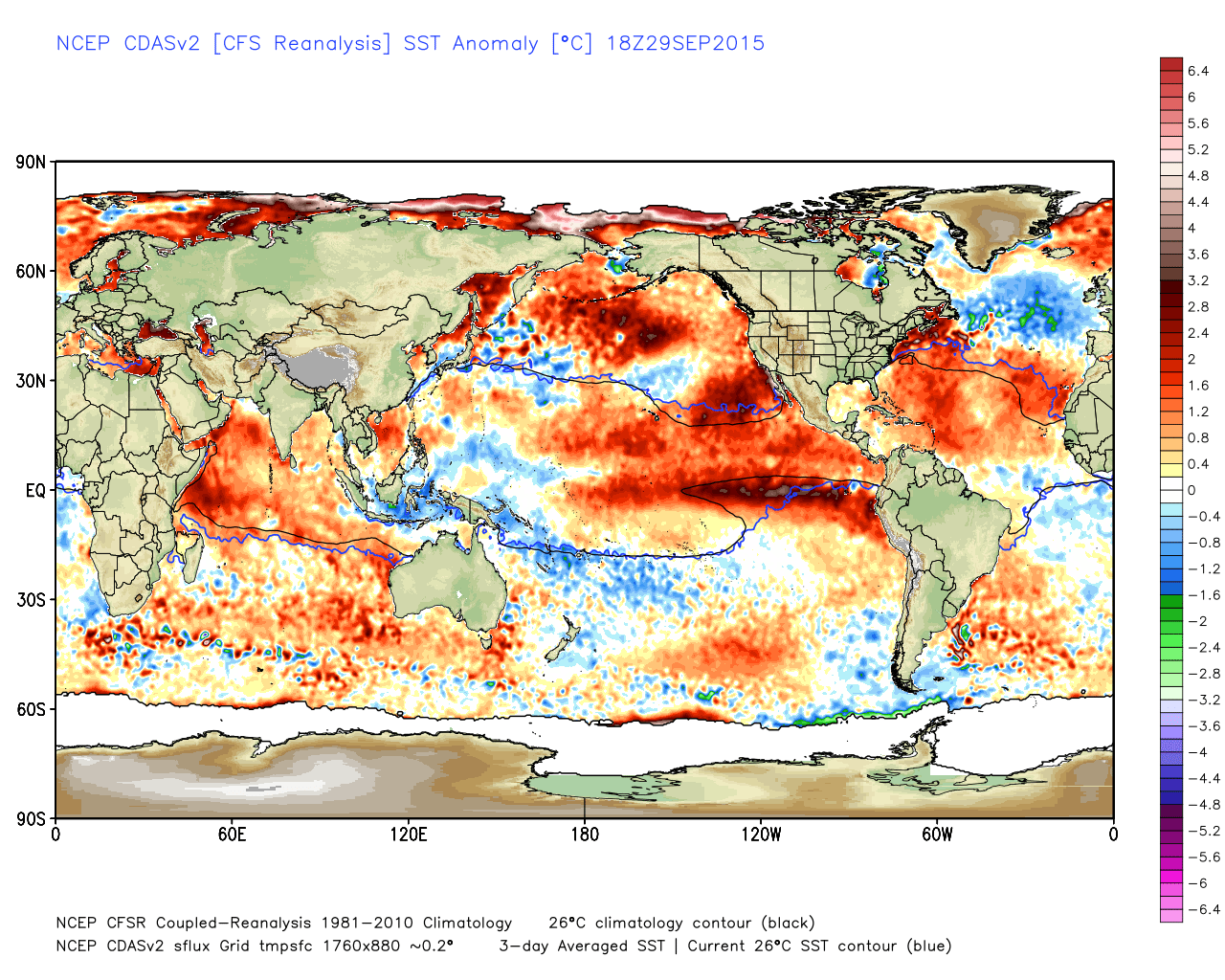 With all that warmer than normal water to our west and southwest, and a flow that has been largely off of the Pacific, it is pretty easy to understand why we've been so warm. So, will we break the pattern in October?

The interesting thing about October is that it has more potential to buck the recent pattern. As the seasonal change gets fully underway, storms will become more frequent, temperatures will continue to get colder, and there will be more opportunity for weather variability. Sounds like a long winded version of, "I think so, but I really don't know," right? Well, you are right... All the ingredients can be in place, but if they don't come together in a favorable fashion, it really means nothing. Let's look at the models: 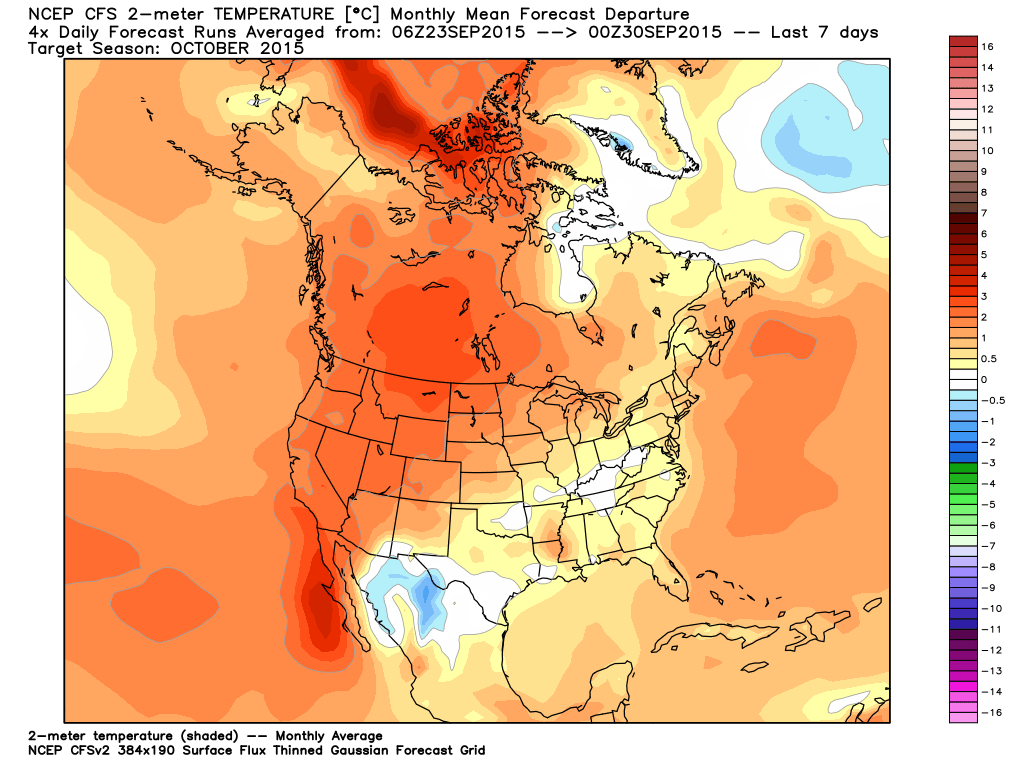 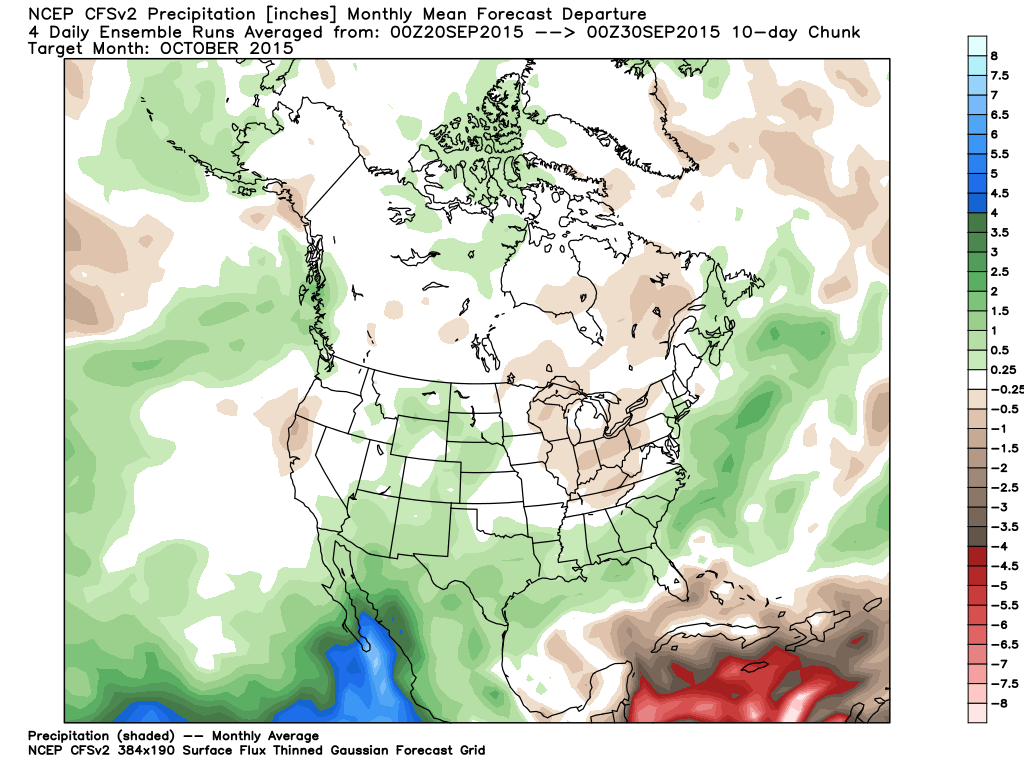 The above map is also suggesting a wetter than normal October for most of Colorado and areas to the south and southeast of Colorado. 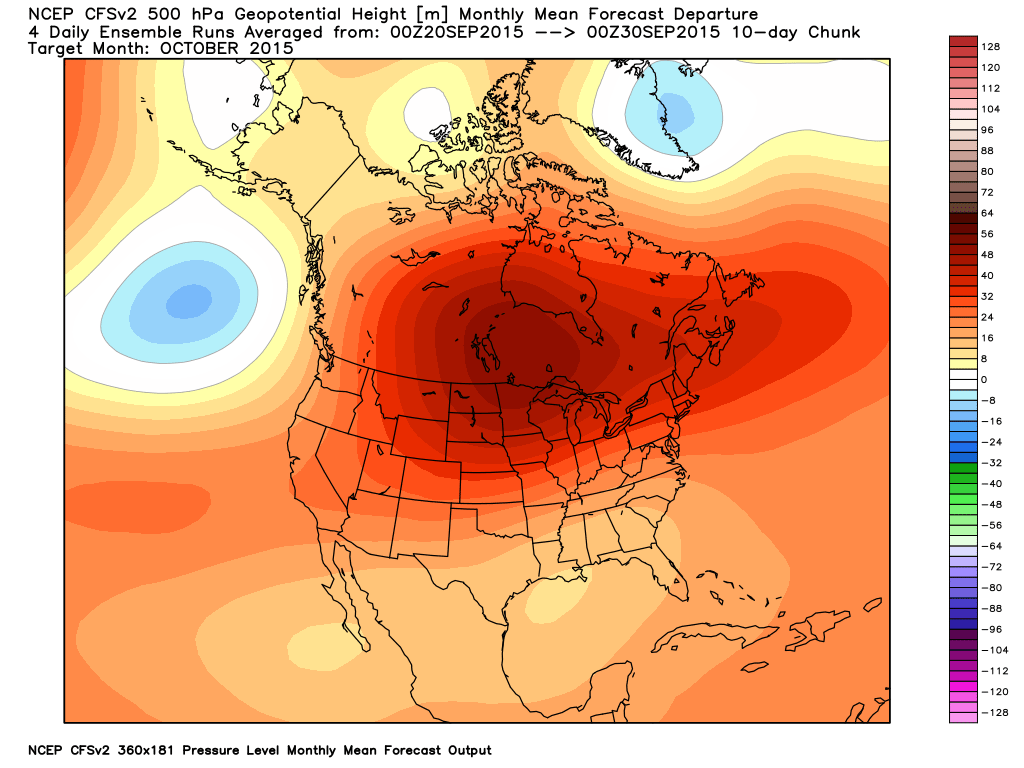 The forecast upper level pattern is shown above. All you need to know is that all of the red is indicating higher heights in the atmosphere than normal. It implies warmth and a largely Pacific flow, which screams warmer than normal weather. Why use the CFSv2 when it can sometimes be bad? Because I believe it has a nice handle on the current pattern for Colorado, especially regarding temperature.

What does the Climate Prediction Center's official forecast look like? Check it out:

Looks somewhat like the CFSv2, doesn't it? Well it should, as it is the main model that the CPC uses to make such forecasts. However, I am not sure the CPC brought the warmer than normal temperature forecast far enough east. I believe it should encompass all of Colorado.

Given the fact that every El Niño is different, and that is really no true analog for this El Niño event, it may seem futile to continue to look at analog info. I think there is one exception to this thinking due to what we know: 1) Strong El Niño events push the storm track farther south, 2) Warmer than normal ocean water in the current locations favors warmer than normal temperatures for Colorado, and 3) A wetter than normal signal seems to show up better when either a strong El Niño weakens or a weak to moderate event exists. When will this El Niño weaken? Likely later this winter and spring, per the various computer models shown in the graph below:

I believe that when this El Niño event weakens, our weather could turn very, very active and potentially much colder. I am targeting late February, March, and April for that to occur. Does that mean we won't see any snow until then? Absolutely not... it just means that unless we see a significant snow event or two sometime in October or November, we may have to wait a while.