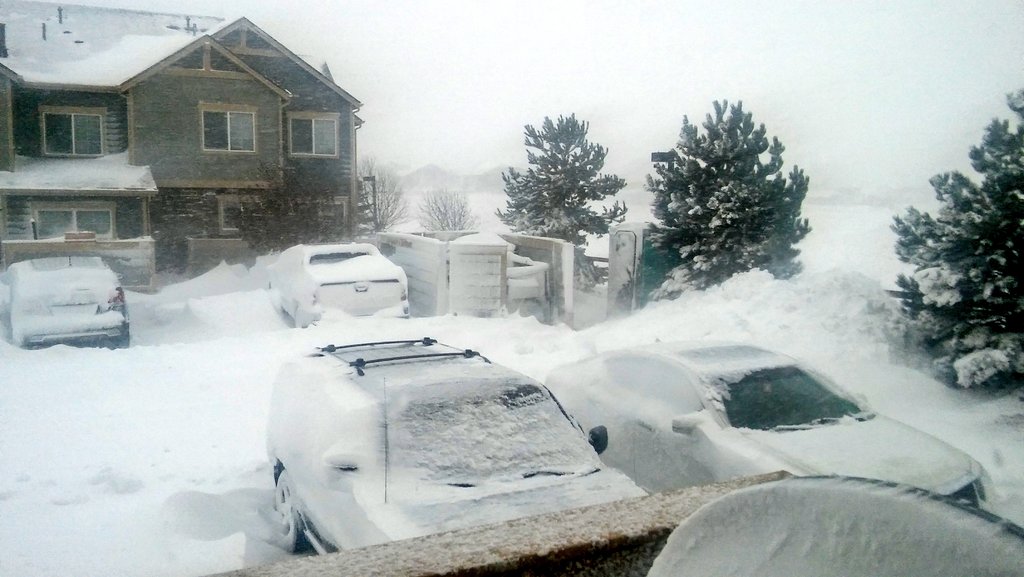 Storm Recap: The Good, the Bad, the Blizzard of Our Forecast

Hopefully you've come to expect storm recaps from us, and an honest review of how well, or how poorly our forecast worked out. Given the tremendous challenges that this system presented we feel good about our forecast overall (great in spots!), but, like so many others, we are feeling underwhelmed by snowfall totals in downtown Denver this morning.

On Sunday we said: "Add to that some very sharp gradients in heavy snowfall over just a few short miles, and someone is likely to feel left out" and isn't that the truth. While the suburbs on Denver's south-side picked up >8" of snow overnight, totals dropped over dramatically just a few miles north. We recorded 2.5" at our station a mile south of downtown, while northwest Denver saw just a trace to an inch or two.

Temperatures were the biggest culprit for the areas that busted around town. Even locations up to 6,500 feet on the west side were fighting a pocket of "warm" air well into the night. Our station picked up nearly half an inch of rain before the changeover finally started to occur – it then took several hours longer than that for any of the snow to stick, eating into valuable QPF and snow totals. By midnight last night we were still sitting at 33/31, and didn't drop below freezing until well after midnight. 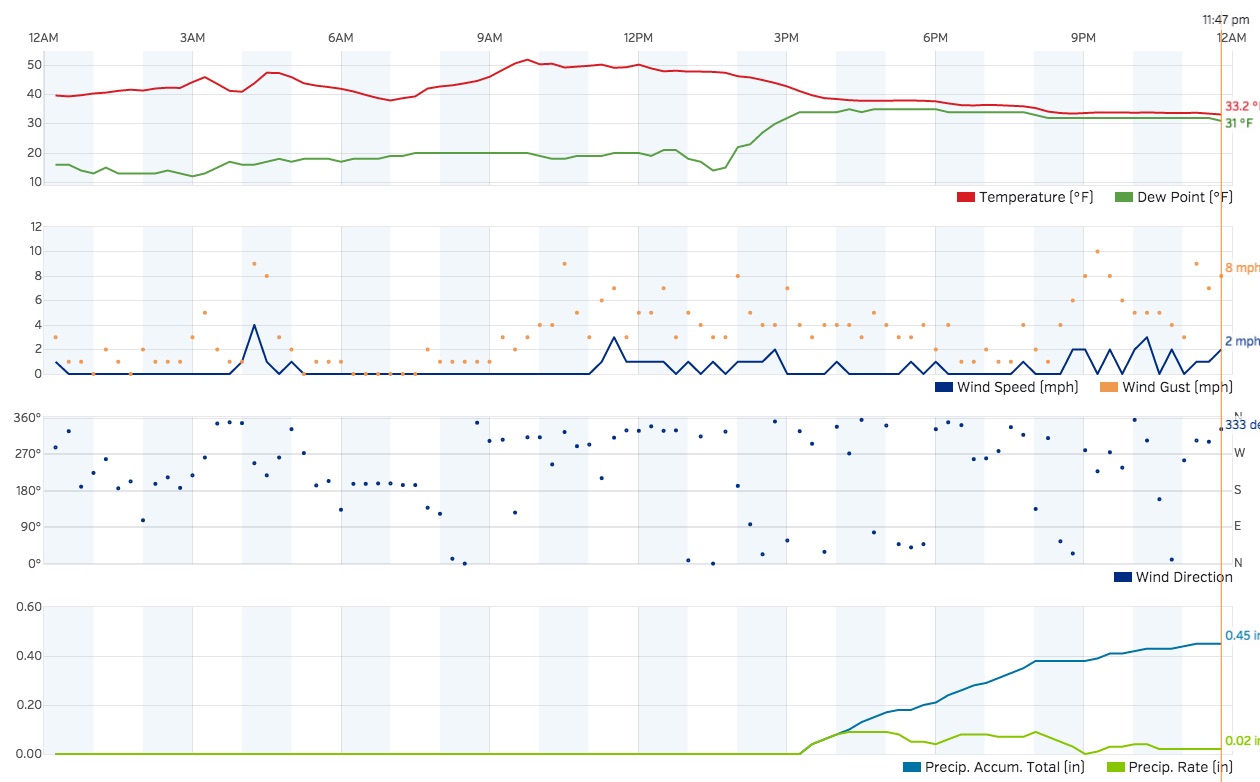 Snowfall Totals
Officially, Denver International Airport recorded 4" of snow, so our forecast of 4 - 10" for Denver was technically spot-on. I guess.

For the northern metro areas, this storm was no doubt a bust, although if you were expecting a big storm up north... well, someone had you fooled. Until yesterday we had most locations from downtown Denver north in the Trace - 4" forecast zone, but bought into a more northern/snowier solution and moved our 3 - 8" zone a bit further north, and increase the trace - 4" to 1 - 4". In retrospect, neither of these adjustments needed to be made, though I do think we would likely have upped Denver's totals to 4 - 10" if we did it again, so hard to argue over the bust downtown.

A look at this CoCoRaHS map from 7am today (most snow in Denver had ended) we see how sharp the gradient was from northwest to southeast. Totals on the south-side of Denver County range from 3.8" to 6.0", with totals from 6 - 12" points southeast. As you move north and west, totals generally drop off dramatically, though there are a few 2 - 4" reports within the forecast 3 - 8" zone. By and large, however, this area was a "bust".

Below is a look at the latest snowfall analysis from the last 24 hours. While likely a bit high in a few locations, I think it does an excellent job showing the incredibly tight gradient from north to south, and it also happens to look a lot like our forecast, generally speaking. Those northerly winds really did work last night. 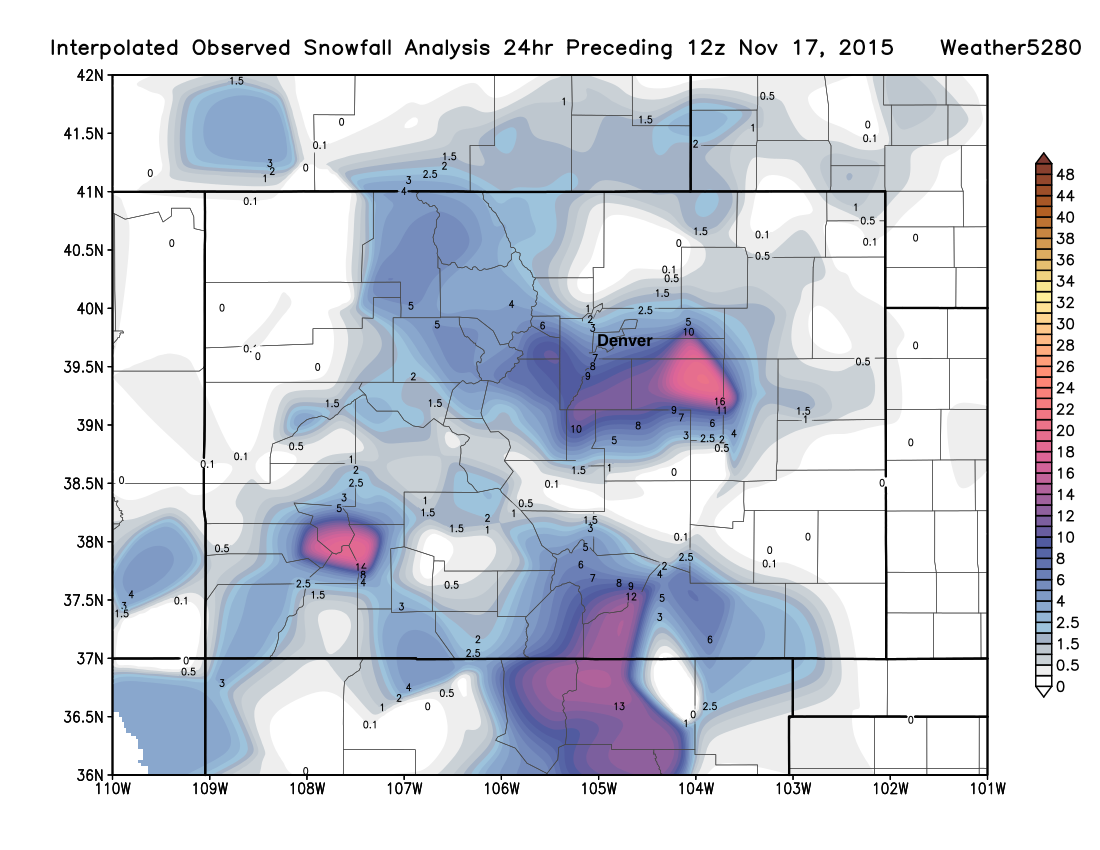 And finally, a breakdown of some spotter reports to the National Weather Service from around the region:

In the end, we'll end up a bit low in Denver proper (though not horribly so according to CoCoRaHS reports), definitely too low for the north metro areas, and just about spot-on for the southern and eastern metro area and Palmer Divide.

Given our discussions over the last week (and there's been some wildness to sort through) we're pretty happy with how the forecast turned out. Certainly good to see the big snow and wind event for the Palmer Ridge delivered as expected. Now it's time to get a real storm for Denver to hit and stick (get it?).

Many of you have already commented on yesterday's post with your storm totals (or lack there of) but we'd love to hear from more of you on how this storm was where you live!

It is still blowing hard in Castle Rock. This parking lot was plowed half hour ago. #cowx #9wx pic.twitter.com/Z9xhqtfWqK