The dominant weather stories of the last week have been far from home as our weather has settled into a pretty quiet (albeit typical) January pattern. So, our focus has been out east, where a monster winter storm dumped 20 - 40" of snow over the weekend, bringing cities from DC to NYC to a standstill, and west, where more rain, snow, and severe weather were making headlines earlier in the weekend.

Here are the 3-day precipitation totals from across the U.S., very quiet across the intermountain west. 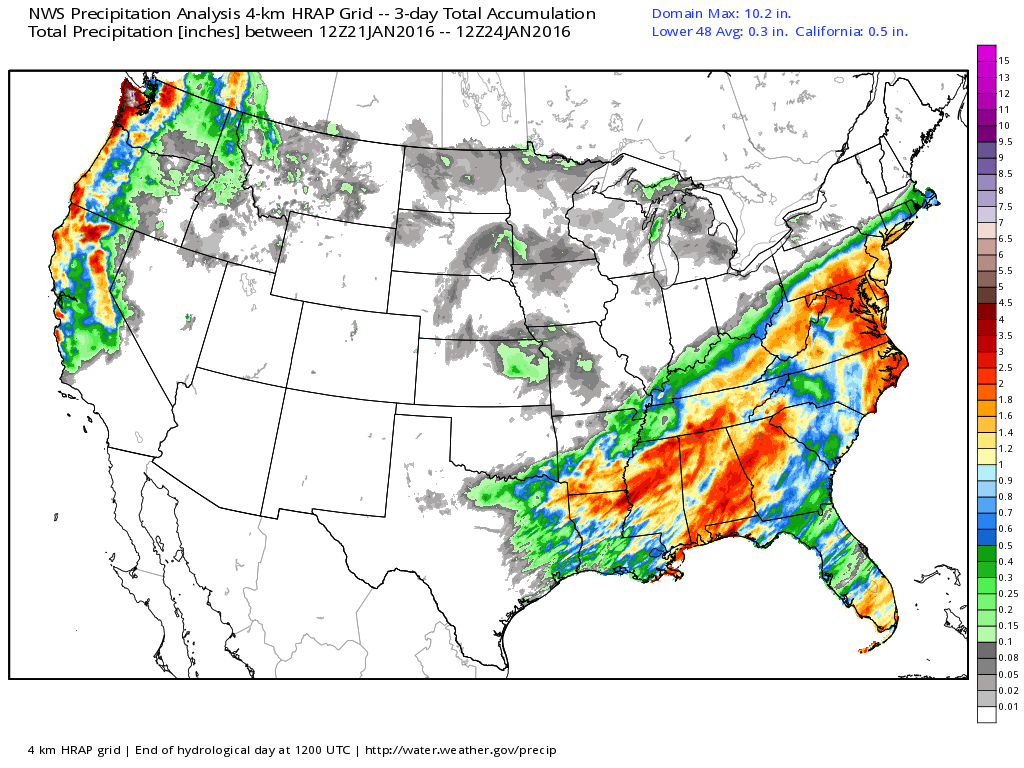 Related: The Great Snowzilla of 2016 Mapped: Snowfall Totals from DC to NYC

As for Denver's weather, it's been a bit of a snoozer lately. Saturday we saw highs top out in the very balmy upper 50s across the metro area, with plenty of blue sky to go around.

Today our weather changes a bit, with highs through Tuesday expected to be below normal for the Front Range. These changes, however, won't bring much in the way of snow – at least at lower elevations, with just a trace to a spotty inch or two expected through Monday morning.

The week ahead
The week ahead looks to hold much of the same. After a few cooler days Monday and Tuesday our temperatures will warm once more. In fact Thursday and Friday of this coming week may be some of the warmest days we've see in a month, with highs near 60 as we head into the weekend. By Friday afternoon the GFS shows temperatures across much of the United States well above normal, with the greatest anomalies focused over the high plains. 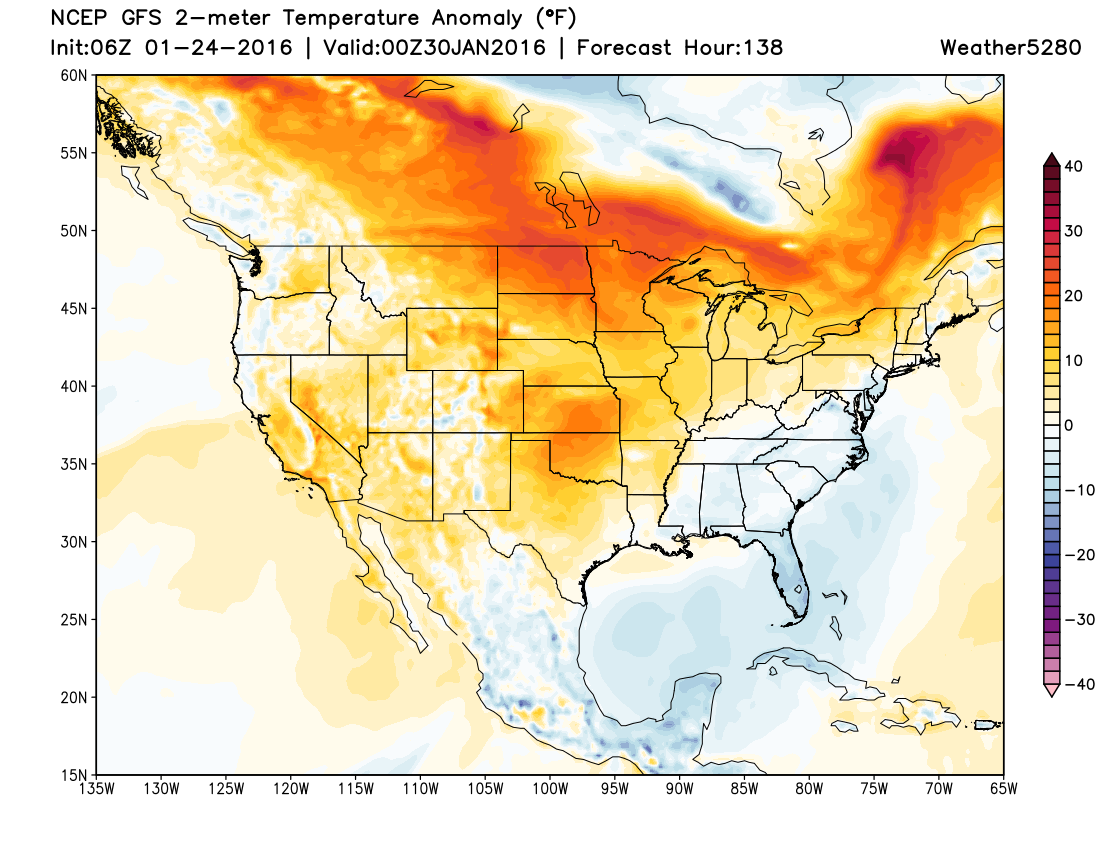 Medium range
So, our focus moves into the medium range with this week looking mostly quiet across the region. By early next week (the first few days of February) it looks like we may, in fact, see some changes to our weather pattern around here. If you follow along on Twitter, or have been reading the comments of recent posts, you've likely seen us hinting at this for some time now.

One thing we see happening by ~Feb 1st is the PNA showing signs of dipping back near neutral, or perhaps even going negative. While a negative phase is a cold one for us, we often look for these transitional periods to show us an early sign of a storm/pattern change. You'll note the PNA is forecast to go even more positive through the end of this week, before dipping off by early next week: 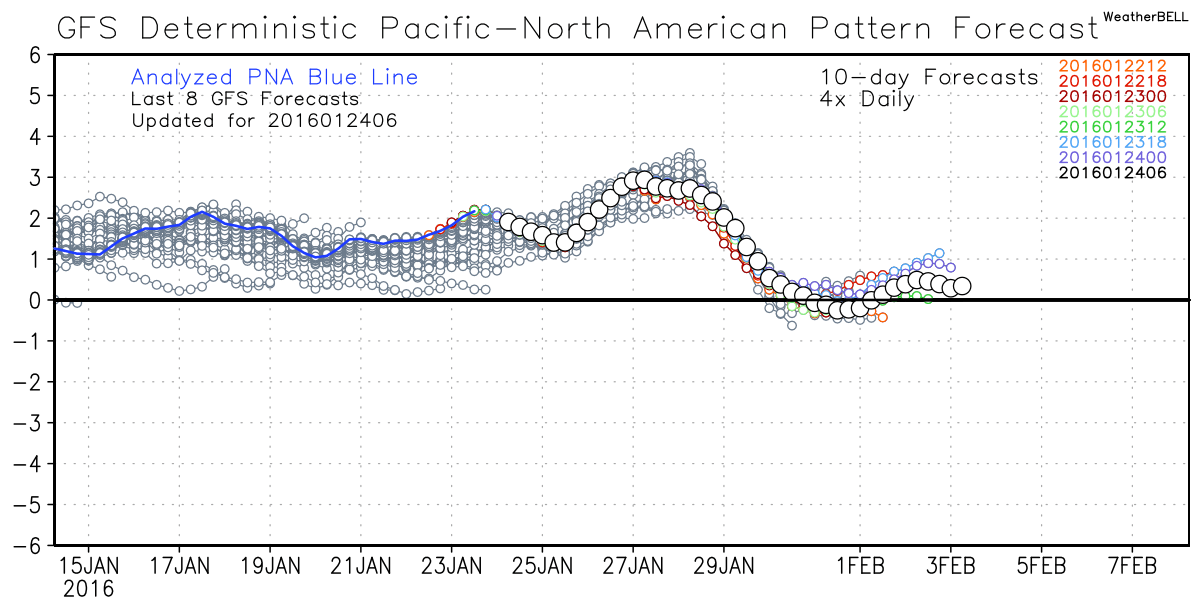 When we look at medium range ensembles we see hints of something interesting showing up during this period as well.

First, take a look at the upper level pattern for late this week – big time ridging (red) over the region leading to temperatures well above normal for this time of year: 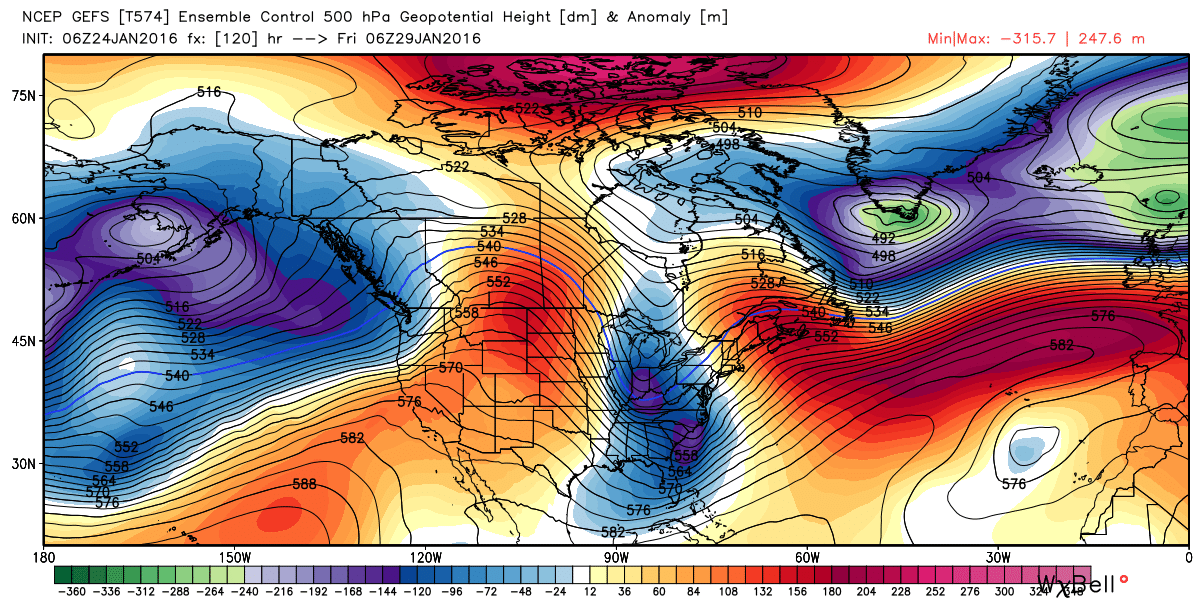 But by Tuesday of next week, look at the dramatic shift we see, with troughing returning to the western states. Now, if you're keen on winter, this map should look very intriguing to you with those tightly wrapping greatest negative anomalies focused over southeast Colorado... 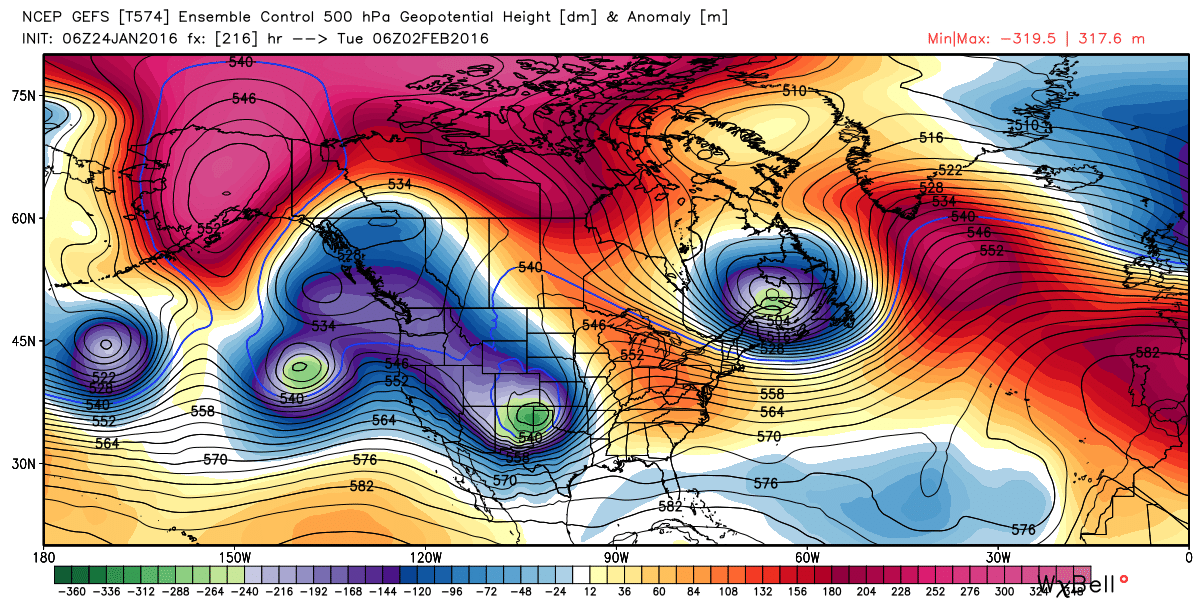 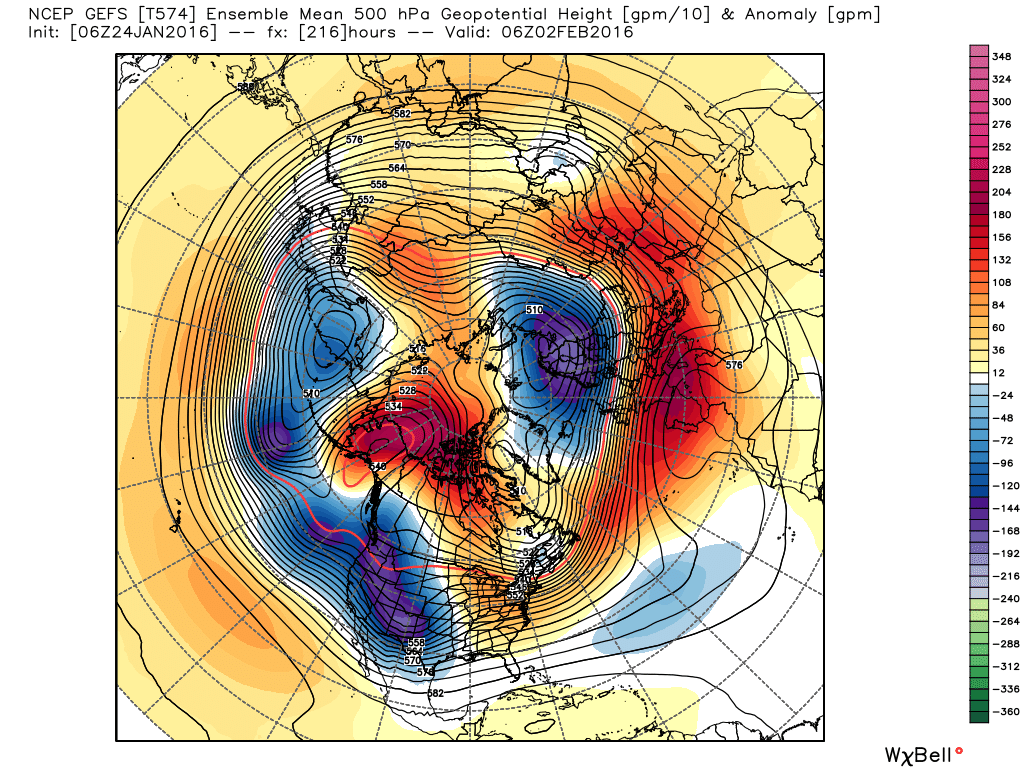 ...aligning nicely with the JMA week two forecast from four days ago: 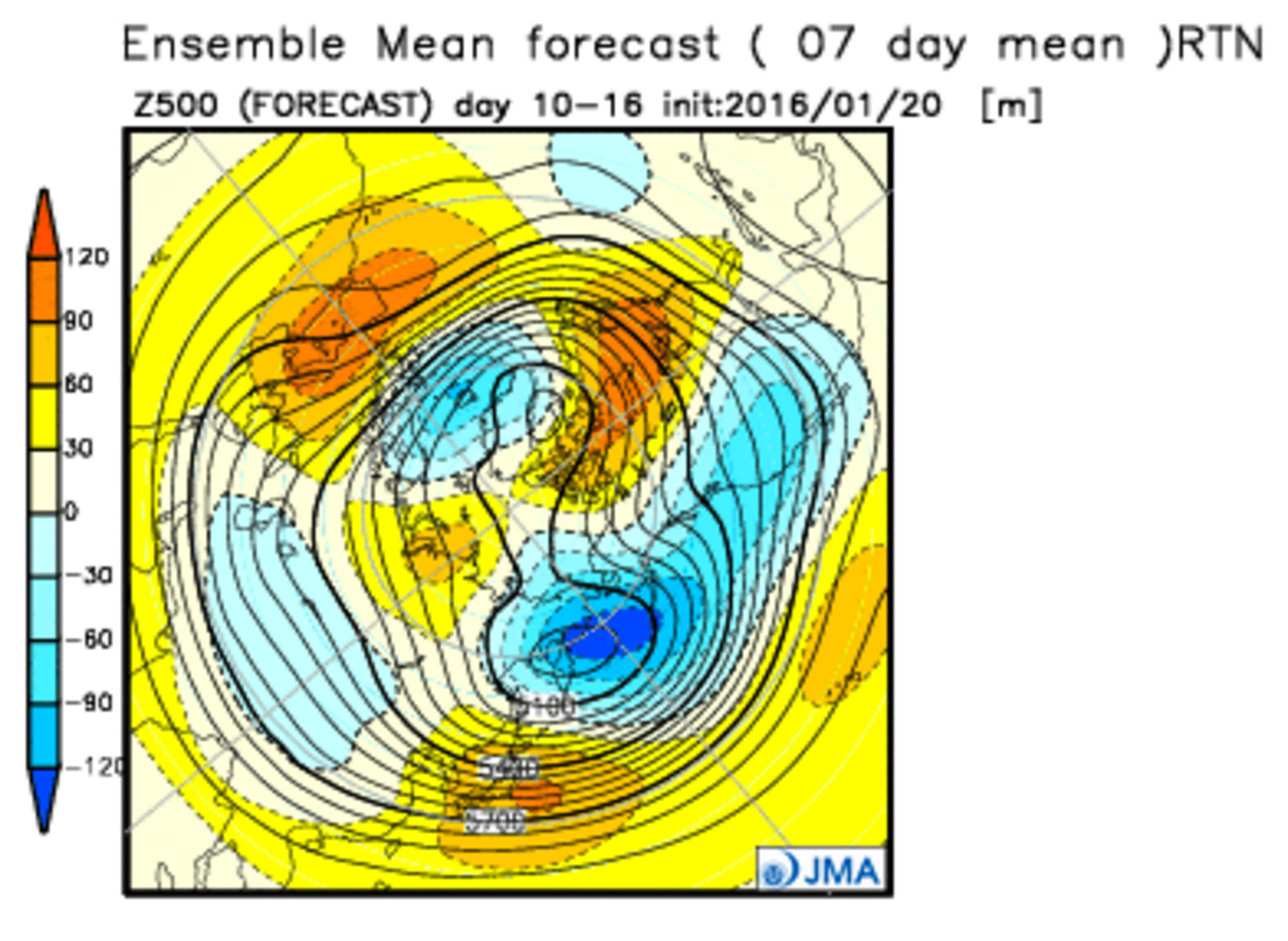 Now, the operational models for the most part aren't there yet. Most are taking the ~Feb 2nd storm well north of Colorado for a big northern Plains blizzard. That said, the EURO deterministic last night did finally pick up on a more southern/deeper track, and produced a pretty solid snowfall for the region early next week. We'll see.

Excited? Yes (I can't help it). Ahead of myself, absolutely. But the consistency we've seen in the medium range ensembles (EURO/GFS/GEM) all have been showing troughing return for the first week of February, so it certainly bears watching. You'll recall that we forecasted a quieter January, but have said since early fall to start paying attention once more as we move into February and March.

While this may end up being nothing more than a cool down for us, it's something to watch over the next week as we coast through a rather balmy end of January. Models are also suggesting that whatever does comes early next week may be short-lived, as they try to pump the ridge across the west again pretty quickly by day 15 - 20.

Get your subscription on, and stay tuned!