Just a quick update tonight mostly to share our initial snowfall forecast for our storm system due in Tuesday night and Wednesday. If you missed our update from earlier today, you can find it here.

Overall, not a lot of change tonight. The 0z NAM is in and looks much snowier than its previous two runs, in many respects seems to be playing a bit of catch up with the EURO. The 0z GFS just came in as well and has recovered a bit from earlier runs. Both the NAM and GFS have a bullseye of heaviest snow just east of DIA through Wednesday – the NAM extends this much further east than the GFS. There will likely be a sharp gradient from east to west across the city, with heavier totals at this time expected east of I-25. The 0Z NAM is brings in the colder air faster than the 0Z GFS, which could mean that some areas start out as rain depending on which solution pans out. As usual, the southern suburbs and areas along the Palmer Divide will likely start out as snow.

There's still some uncertainty as models are struggling a little with where to focus greatest QPF, and still showing slight variations in Low track and speed. With that we'll broad-brush a wide area of 4 - 8" from east/southeast Denver out across the Plains and see if we need to adjust tomorrow: 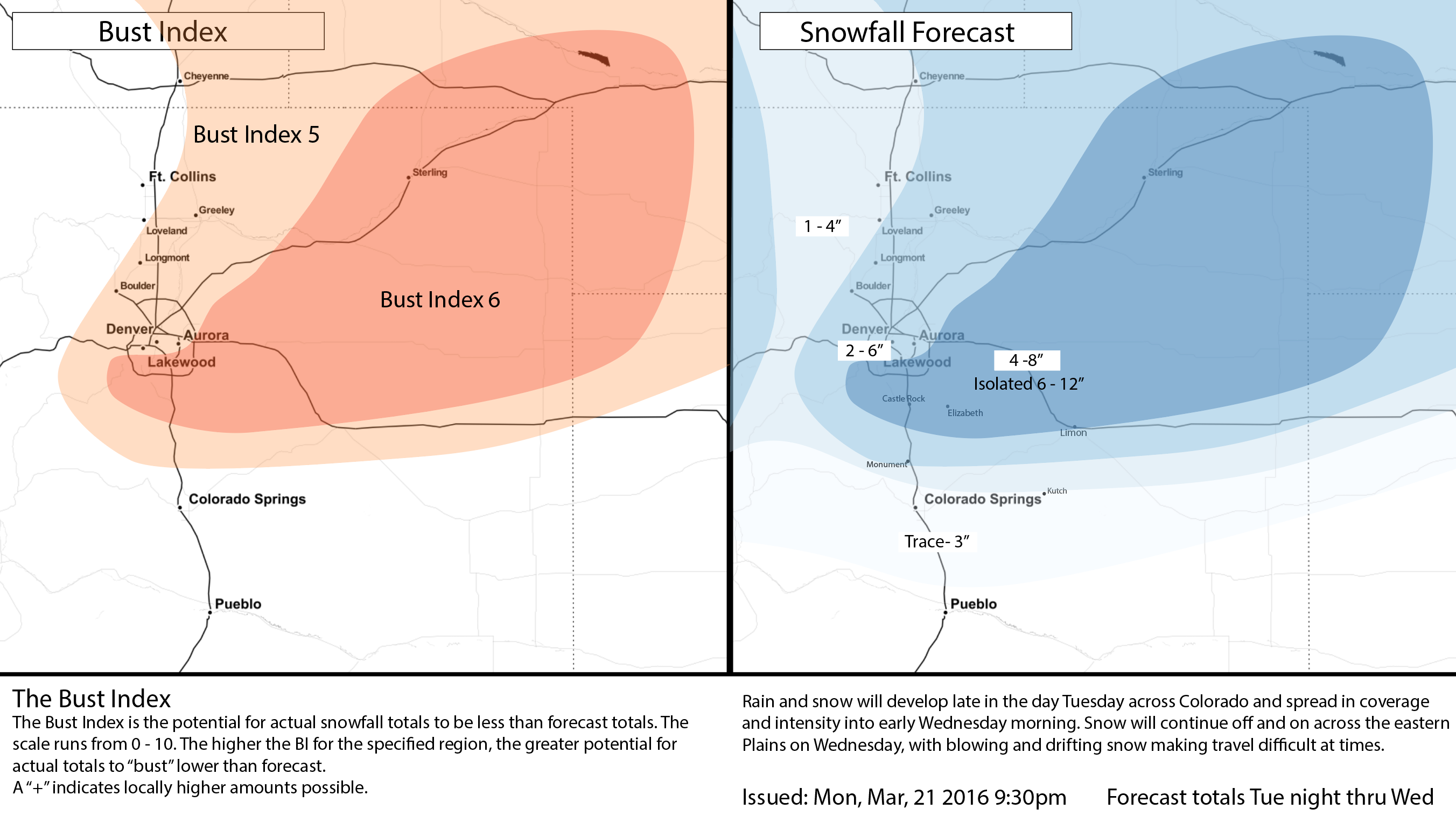 We continue to think those living east of Denver, along the Palmer Divide, extending northeast across the Plains stand the best chance at greatest totals with this system. For Denver, we are going with 2 - 6" of snow, with 4 - 8" in our higher zone. While some locations may see more than 4 - 8" here, we think melting / sun angle will mean more isolated totals of 6 - 12", rather than widespread.

Timing: Late Tuesday night and especially Wednesday will hold the worst impact of snow and wind for the area.

Wind: Gusts over 40 mph will be likely on Wednesday, which will likely lead to blizzard conditions in rural areas to the east of Denver and on the Palmer Divide. Ranchers with sensitive livestock and those that are calving need to be prepared.

Impact: This will be a high impact event for those that do see the heaviest snow. Keep in mind... there will likely be a very tight gradient in terms of snowfall amounts. This will be especially true south of Monument into Colorado Springs.

Of course we'll see how the latest data look in the morning and pass along updates as needed Tuesday. Enjoy another mild day, and get ready for a quick return to winter later in the day Tuesday!