Weather is a Tournament of Odds

Depending on where you get your weather information you really are getting different philosophies of the forecast process. I'm a probabilist – or, I believe in forecasting based on the probability of a weather event occurring.

Regarding philosophies, some sources "rip-and-read" (a nice way of saying someone that copies other source forecasts), others look at model data but accept it at face value, and then there are those that dig deeply into the data and weigh the odds of what that data is telling him/her. After all, weather forecasting is a game of odds.

In Denver, most sources are the first two options. By the time you get down to those sources that actually dig deeply into the data, the numbers dwindle. And, this isn't to say that a fully degreed meteorologist with all the fancy certifications is the latter. Quite the contrary, sometimes.

Forecasting is a process that doesn't require a degree, certificates, etc. It's a process that in some ways is comparable to the NCAA tournament bracket contest you yourself may have joined. Not only sports people hop in this "arena". 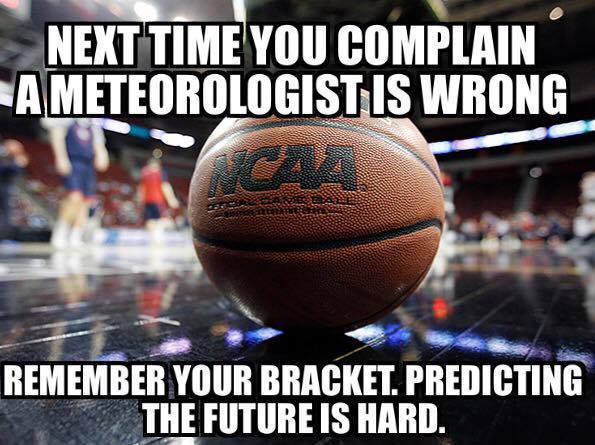 This picture made its rounds on social media and was met, not-shockingly, with a mix of reactions. I was one that thought, meh it's fun but doesn't really tell the story.

Many comments regarding the image were, "I wish I could get paid to be wrong all the time" or "How stupid, 'those people' have all kinds of technology to tell them what's going to happen." I do think it's important to note that the image should read "WEATHER FORECASTER" rather than "METEOROLOGIST" because there is a difference.

Regarding the first, we do get paid – not to be wrong, but to be as accurate as we can be. Just like some financial planners, doctors, lawyers, contractors, etc. there are some better than others and yet they all get paid.

Regarding the second, yes we do have technology, but a lot choose not to use it. Going back to any career you can think of, there are stronger and weaker in each category. To some forecasts, that means copying someone else's forecast. Others may pour themselves into the data. We get paid regardless of that. It is up to the consumer to choose the reliable ones.

While reading through some of the comments on various posts of this picture I found a repeated poster that caught my attention, mostly for how offensive he was. He complained at length that the comparison is terrible (although he chose to use a four letter word, I translated for you). In going to his profile page I quickly learned this guy was a huge sports fan. A sports nut, if you will. I haven't reached out to him yet, that is the point of this post, but Dear _______ there are similarities to picking a winning team in the NCAA Tourney and weather forecasting.

When filling out a bracket there are many approaches. Copy someone else, gloss over stats quickly and pick, and dig deeply into records, injury reports, coaching, officials, court advantages, etc. Similar to the weather forecasting process? Yes.

Sports Nut was the latter – the 'me' of sports. He cited so many sports facts on his page's feed that I wish I knew him for Thursday trivia nights as I always miss the sports questions. In one such post, he broke down one region of the bracket and weighed the odds of teams and created his own weighting system. Hmmm sounds like he was creating a list of probabilities of possible outcomes. Gee, I think Vegas has odds for gamblers...maybe he should have just copied theirs'. Oh no, he isn't the average bracket picker...he is a minority in this arena.

You see, the tourney's seeding process makes it easy for the casual person to pick higher seeds to make the final. Just as I see various weather models "ranked" based on their performance. #1 seed is the European Center's ECMWF model, #2 UKMET, #3 American GFS, so on and so forth for all other weather computer models that are out there. Just as a #1 seed can lose to a #2, say Kansas losing to Villanova (goshdarnit), the ECMWF doesn't always give us the best forecast. So simply choosing by seed # isn't the best weather, or sports, factor.

I, like the Sports Nut, go beyond this... way beyond. I break down the model data as deeply as I can, time permitting. I don't look at what it tells me, I look at why it is telling me something. Just like successful bracketologists don't rely solely on someone else. I break models down to the point I understand the probability of an occurrence. I don't read a model and say, "well the GFS says tomorrow will be 85. I see how much confidence the GFS has in its high of 85. If the confidence is low, I am not going to blindly accept 85 as the answer.

Further, when it comes to snowfall I do the same. Those that accept a model telling them 4" are probably right from time to time. Yet, those that look at how likely is 4" occurring are likely to be most often correct. Just as the more involved financial planners are more likely to gain more on an investment. Or a more specialized doctor will have a better opinion about a condition.

You see me occasionally posting my "Gambler's Charts" for snowfall amounts. For example, Wednesday and Thursday's snowfall probabilities for a few locations based on one of the American models: 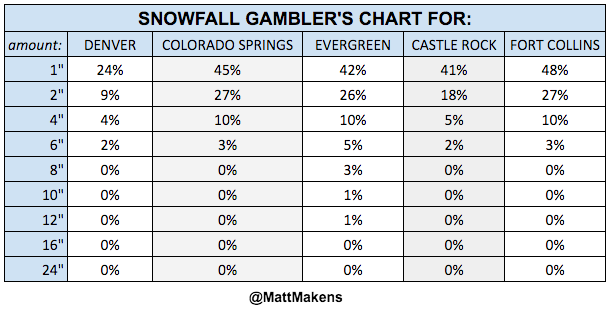 That particular model spits out 4", at face value, for all those locations listed. By digging deeper into the data you can see how that probability of 4" is very different than a "guaranteed" outcome.

Yes, Sports Nut, you take the bracket seriously and likely don't appreciate being wrong. Just as I do not – in fact, it makes me cranky. But, we adjust our probabilities and enjoy the next challenge. Yes, I have fancy computers to help me out, but so do you...where else did all those stats come from.

I am sure my sports fan doesn't like amateurish commentary about matchups from his version of rip-and-readers, just as I don't. Yet, it's part of the game.

It's the game that keeps us coming back. It's the challenge of trying to be correct and stand apart from the rest of the crowd. I know one thing, I'll be reading Sports Nut's Facebook page a lot more closely next year before I fill out my bracket. And, maybe Sports Nut will come to read my analysis, too, before making generic blanket statements about the collective whole of weather forecasters.

If you'll excuse me, I have a spreadsheet to update.