Looking for our latest snowfall forecast? Here's our discussion from yesterday: In the Weekend Battle of Rain vs Snow, Snow Likely Wins in Many Locations, another update will be out this afternoon.

While heavy snow and rain will likely be the main concern with this weekend's system, we also have a threat of seeing severe weather across the Eastern Plains, Western Kansas, and the Oklahoma and Texas Panhandles today.

When determining the threat for severe thunderstorms, we must consider ingredients such as moisture, lift, instability, and wind shear. As you can see from the animated GIF above, our weather is set to turn much more active as we head through today – with strong storms possible across the eastern Plains, and rain and snow becoming likely statewide by this evening.

There is also a dryline that can be seen over Southeastern Colorado. This can be seen by the tight dew point gradient (circled), where the dew point increases 10°F over a few tens of miles as one moves to the east. We can also see that this dryline is an area of convergence, with southwesterly winds on the west side of the boundary converging with southeasterly winds on the moist side of the boundary. Drylines often act as a source for lift on the mesoscale. This dryline will likely propagate eastward throughout the day once heating and mixing begins.

Below are two forecast soundings from the 12Z NAM for Lamar, CO. You can see that at 21Z, dew points are in the low 50s, there is no convective inhibition, instability is surface-based and cloud bases (which can be estimated by the lifting condensation level) are located around 800 mb. Deep-layer wind shear is impressive, which will allow for rotating updrafts (supercells). Although the wind speed doesn't increase more rapidly with height within the lowest portion of the atmosphere, an isolated tornado certainly cannot be ruled out. Large hail will likely remain the greatest hazard. 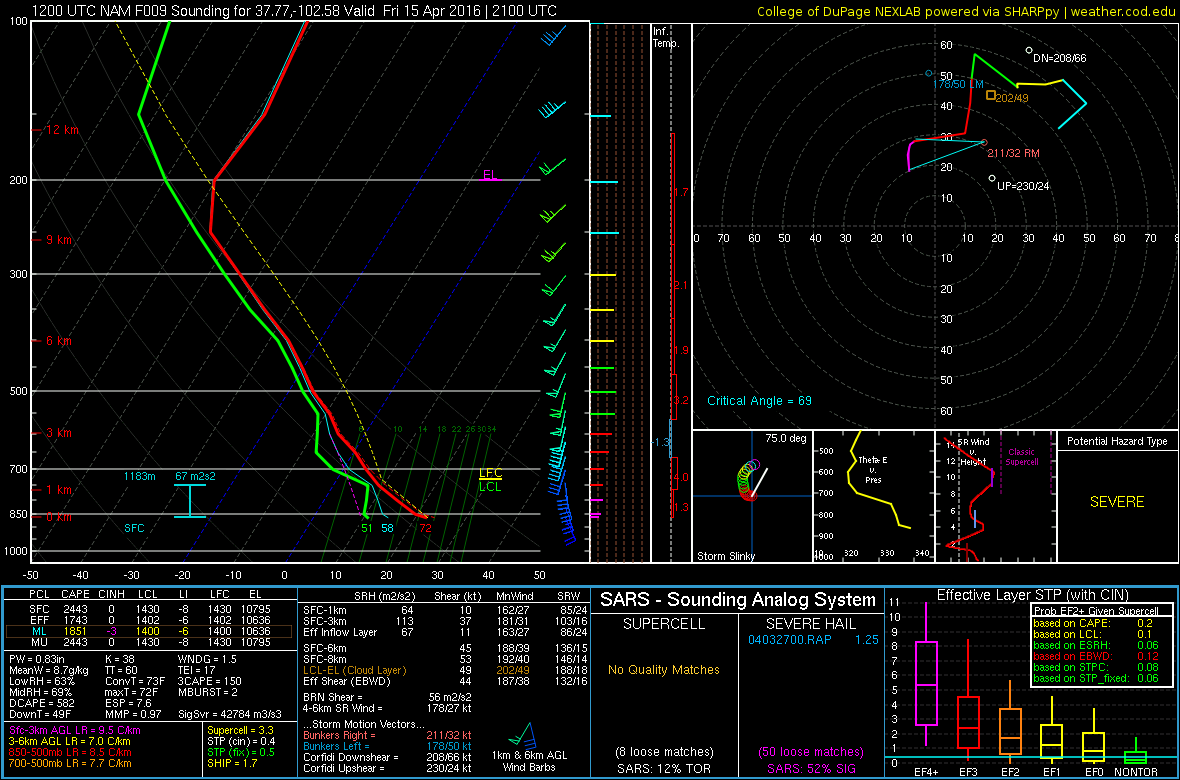 By 03Z, any remaining convection will likely transition into a mesoscale convective system (MCS). At this point, the main hazard becomes damaging winds, hail, and heavy rain, as opposed to a tornado threat. We can see that the atmosphere is nearly saturated through nearly the entire depth of the troposphere. Precipitable water is also nearing an inch which suggests that flash flooding is a possibility. 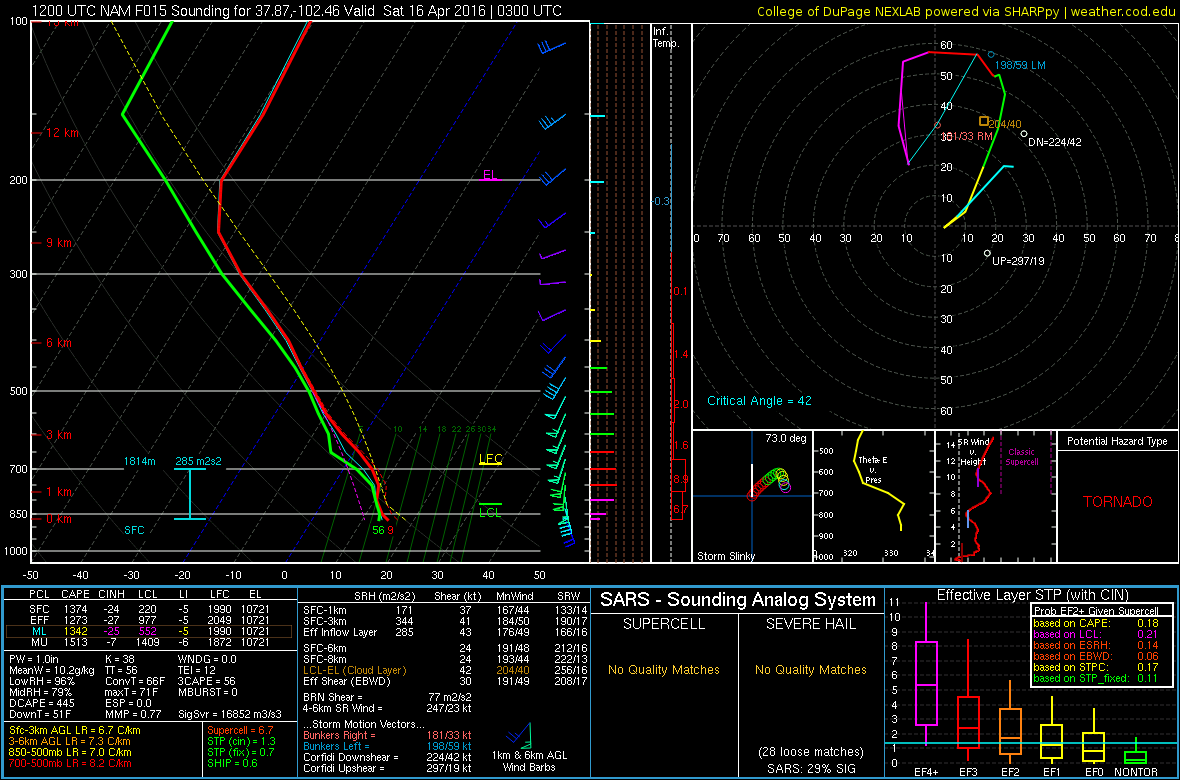 With all of this considered, we see the SPC has issued a Slight Risk for sever storms across far eastern Colorado for today. The greatest threat of severe weather will likely be east of Denver, with areas east and southeast of Limon, CO seeing the greatest tornado threat this afternoon: 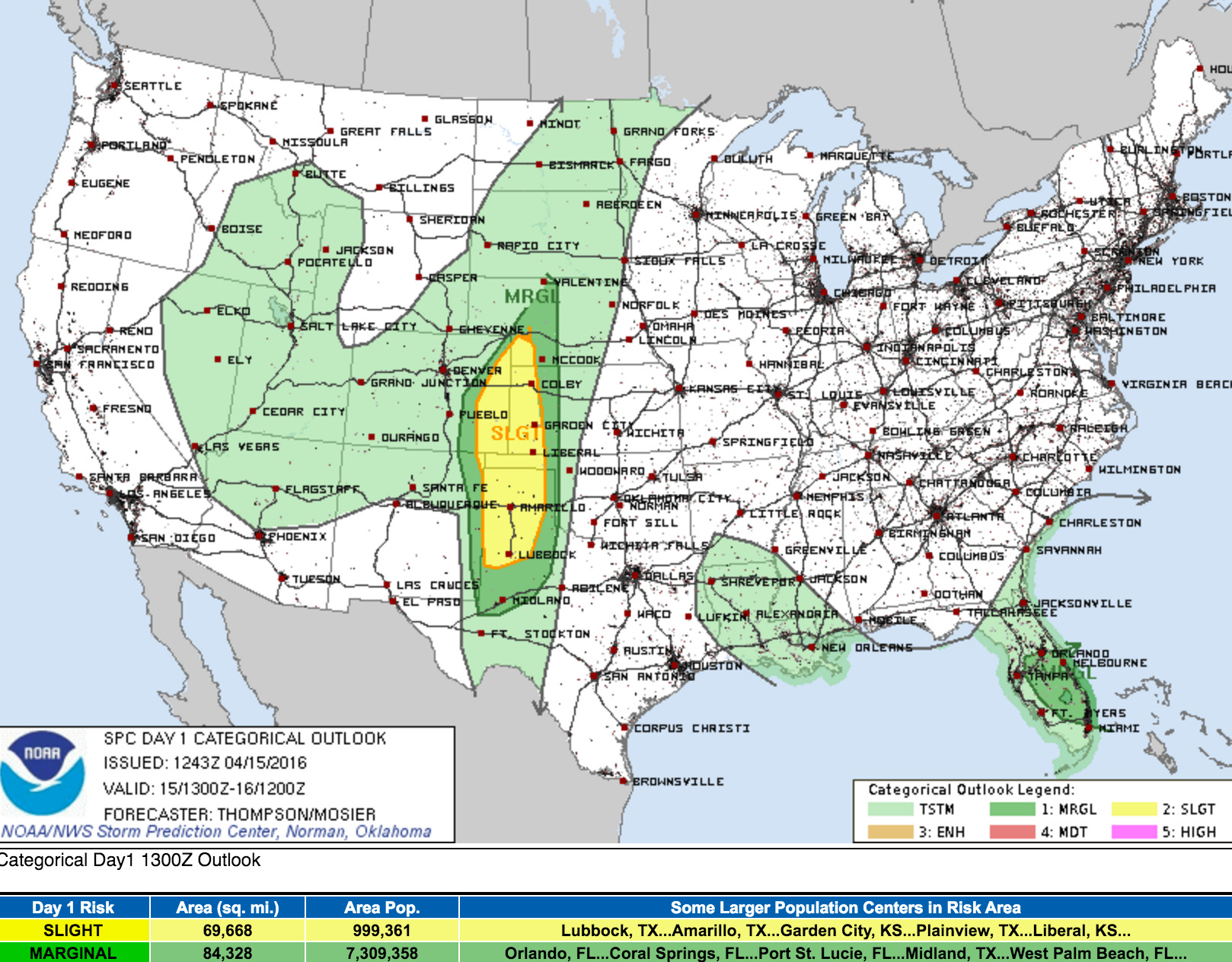 We'll have another update later today to address latest thoughts around rain and snow this weekend. Stay tuned!