It is no secret that we've been dry and very warm for weeks. In fact, we saw cooler weather and mountain snow back in August than we have had during this "fall". Here we are at the end of October, and I am growing more and more worried every day.

While most of our long-range updates and discussions will be shared with Insiders now, occasionally we'll do a post here to share a few things we're looking at a bit further down the road, and try to encourage more folks to join us an Insiders.

Let's go through some of that now.

Is our recent very warm weather anything out of the ordinary? Not particularly. Colorado and much of the United States is usually quite warm following a strong El Niño. The graphic below shows what a typical September and October looks like after a strong El Niño...1983 and 1998 are used as examples: 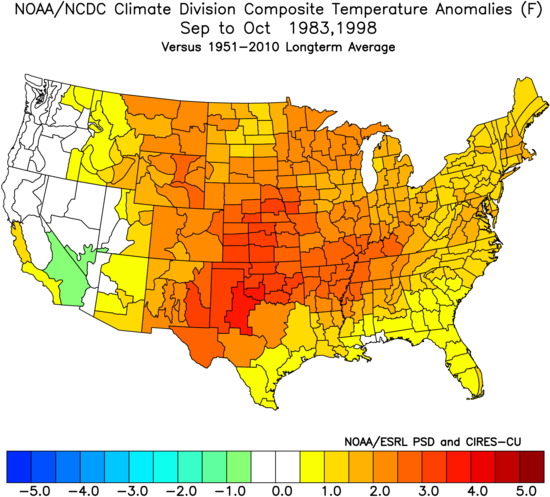 All of that yellow, orange, and red represents MUCH warmer than average temperatures. So, this warm weather should not come as any surprise.

I also believe that what may be contributing to our recent RECORD SETTING temperatures is the dry air and ground. Dry air and dry ground heat much more than humid air and wet ground. The air and ground are both BONE DRY.

What is up with the oceans and La Niña? Well, La Niña is still in the developing stages, but really hasn't been full been reflected in the atmosphere. You can clearly see the colder than average water off the West Coast of South America: 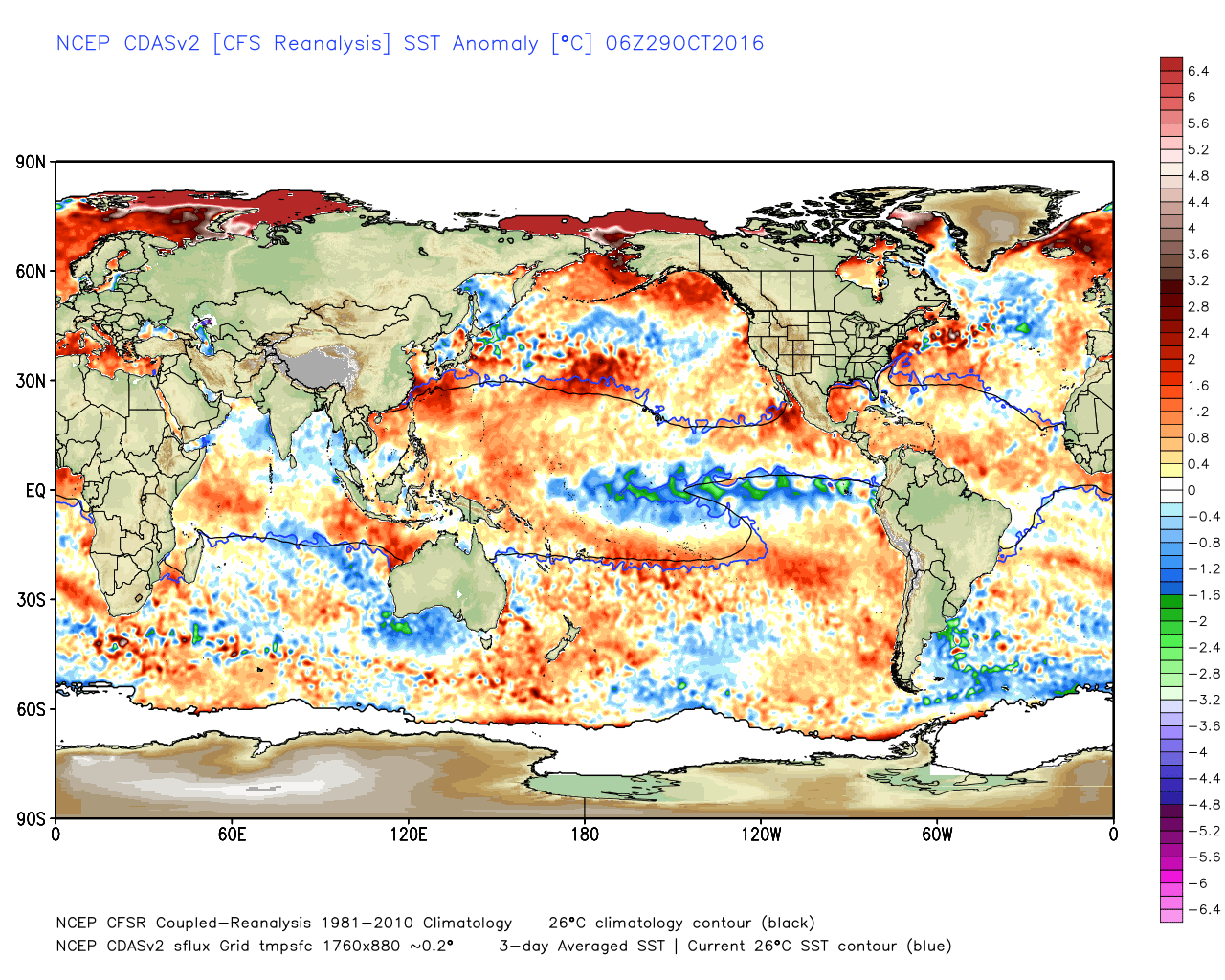 Good common sense tells us that if the water surrounding a land mass is warmer than average, the land should be warmer than average. No surprise here... This sea surface temperature pattern is still associated with a positive/warm phase of the Pacific Decadal Oscillation. However, the PDO has cooled quite a bit recently. The graphic below charts the PDO Index back to 2005: 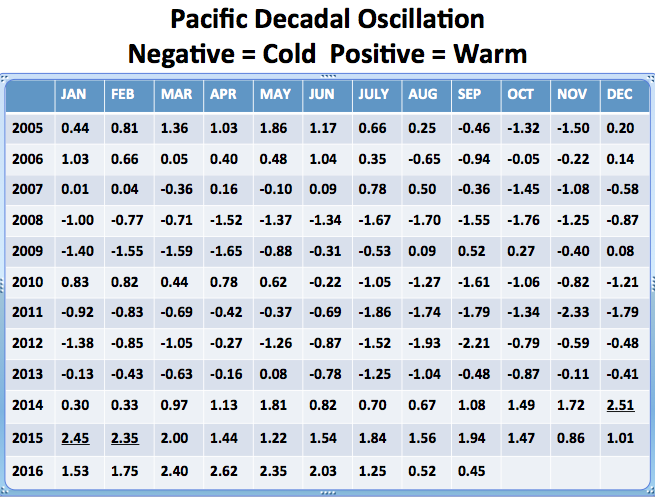 While the PDO is much cooler than it was just a few months ago, it is still positive. A positive/warm PDO usually does not produce a pattern favorable for colder than average weather for us. In fact, it is usually the opposite...especially when other forces are at work.

What are the oceanic and atmospheric teleconnections doing? See below: 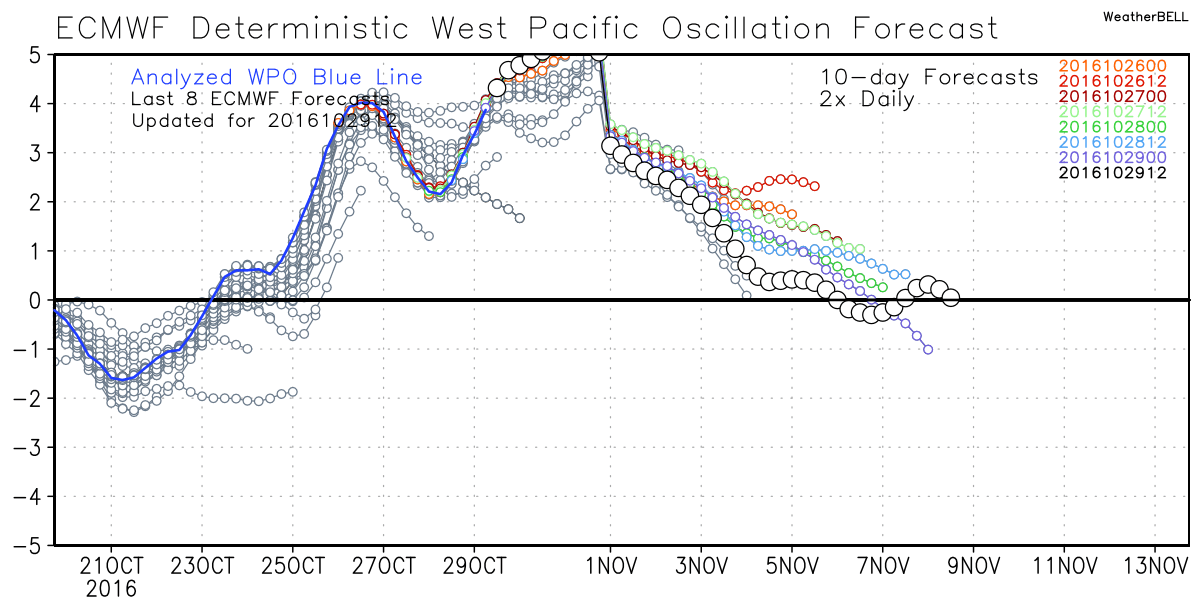 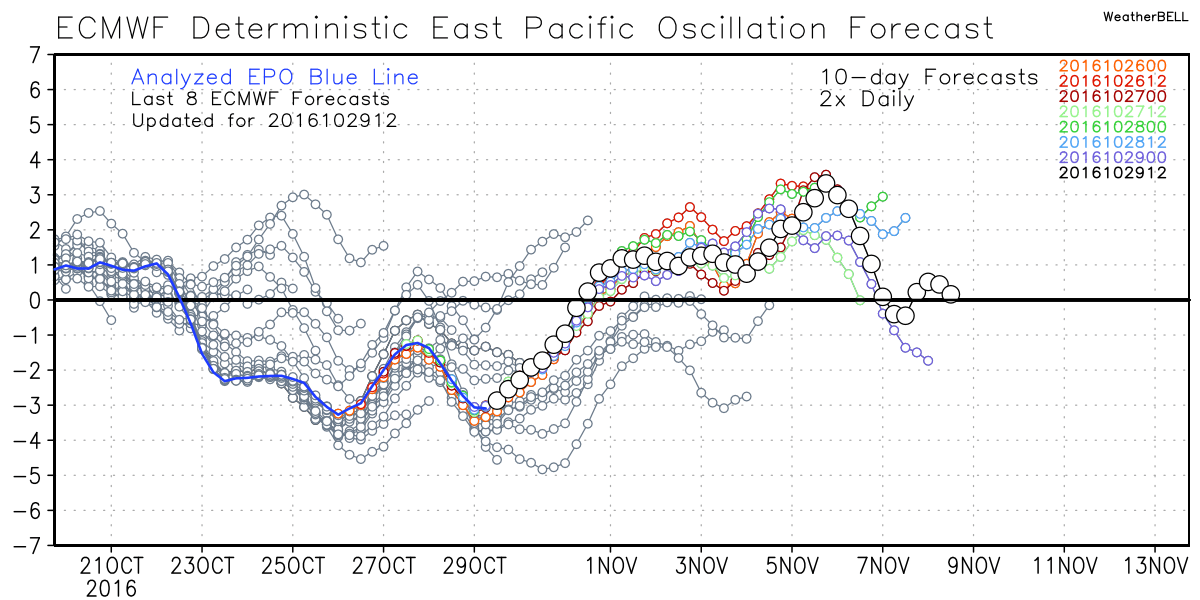 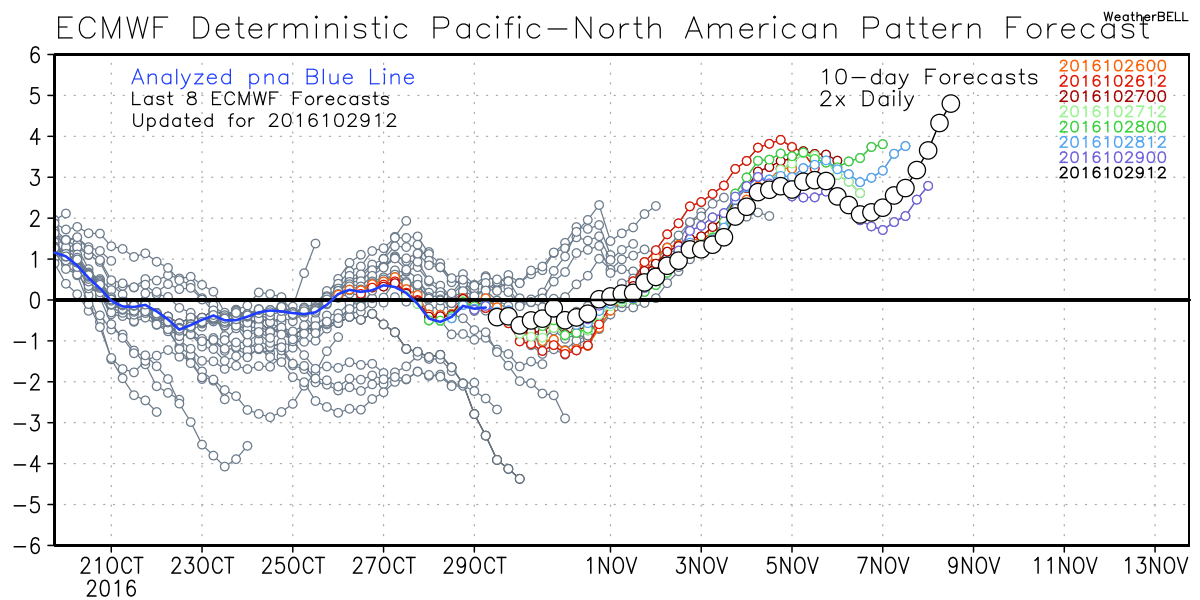 All of the major teleconnections tied to the Pacific Ocean have been or are in a very positive mode. When considering this, the PNA seems to have the biggest impact on us right now. A very positive Pacific / North American Oscillation (PNA) floods us with warm Pacific air and looks like this in the models: 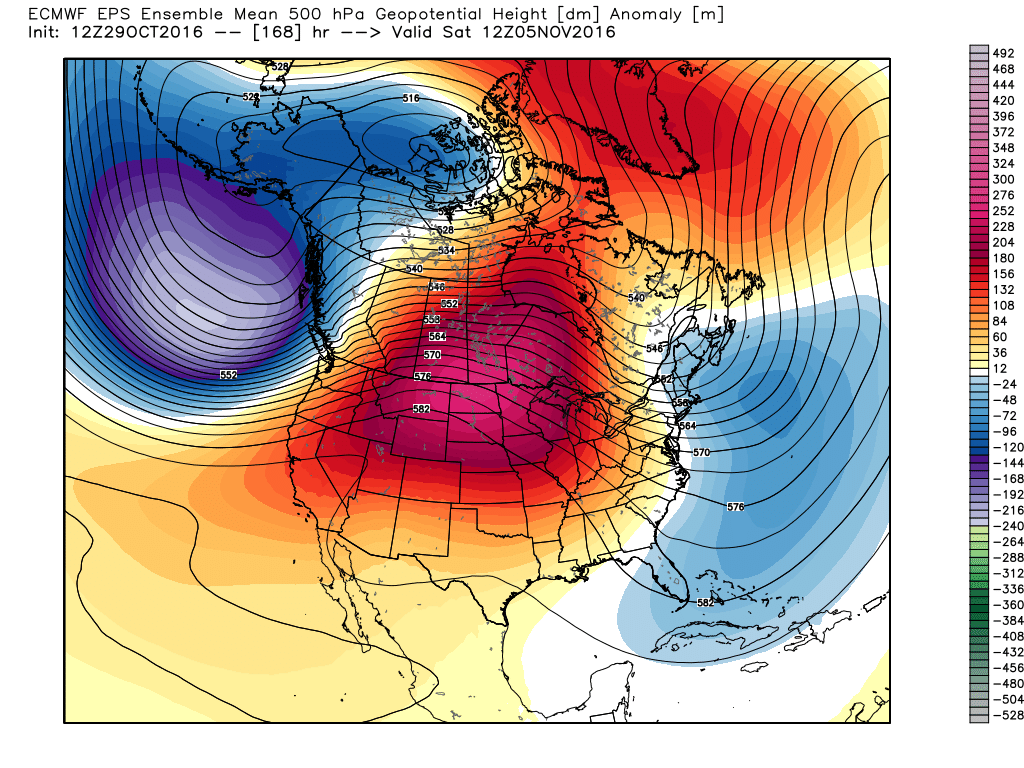 You can clearly see the trough of low pressure (Aleutian Low/blues) in the Gulf of Alaska and the massive ridge downstream over the western 2/3 of the United States (reds). That ridge is responsible for producing more warm and dry weather. This type of pattern has been very persistent, and some computer models suggest that it may be VERY tough to break down in the future: 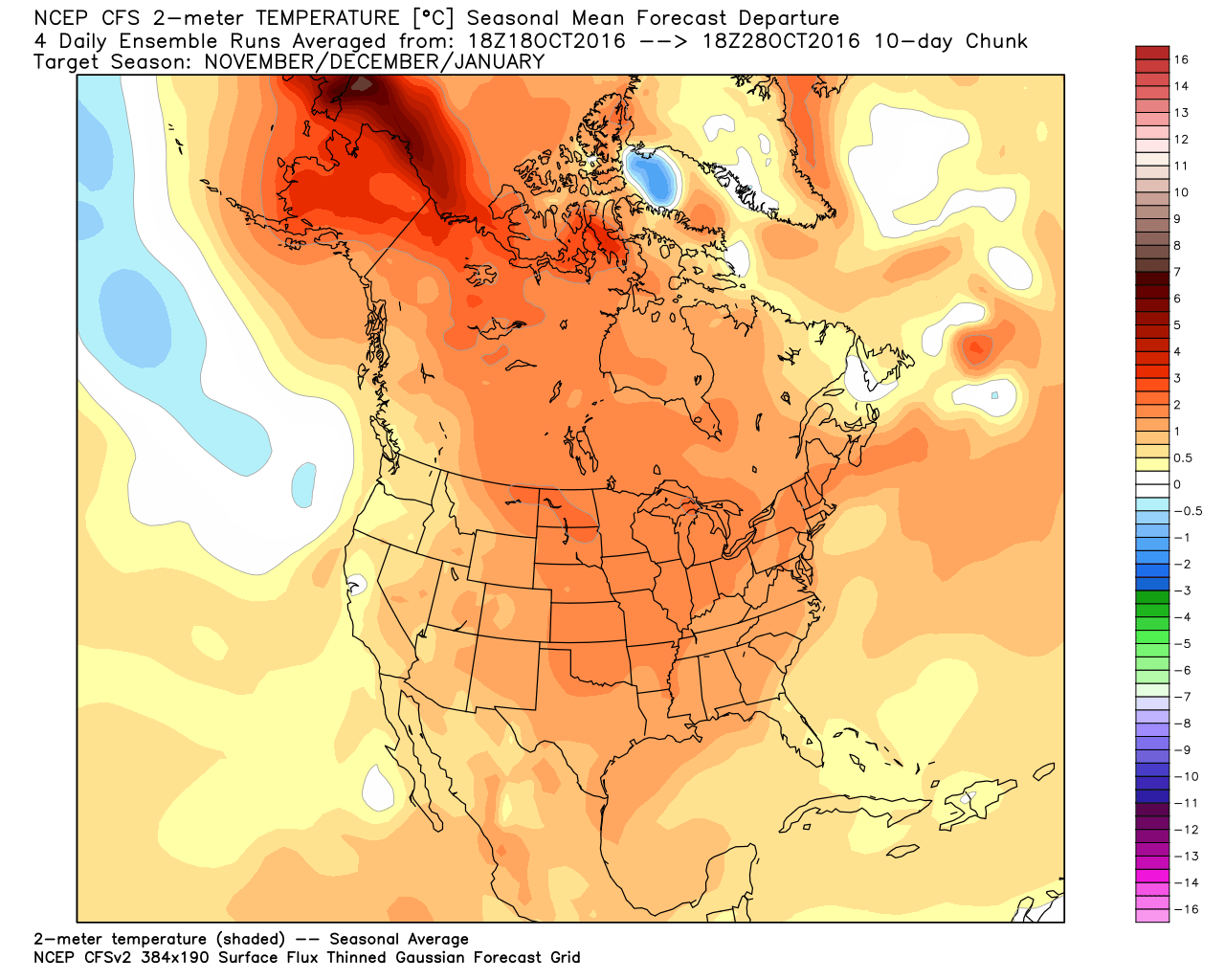 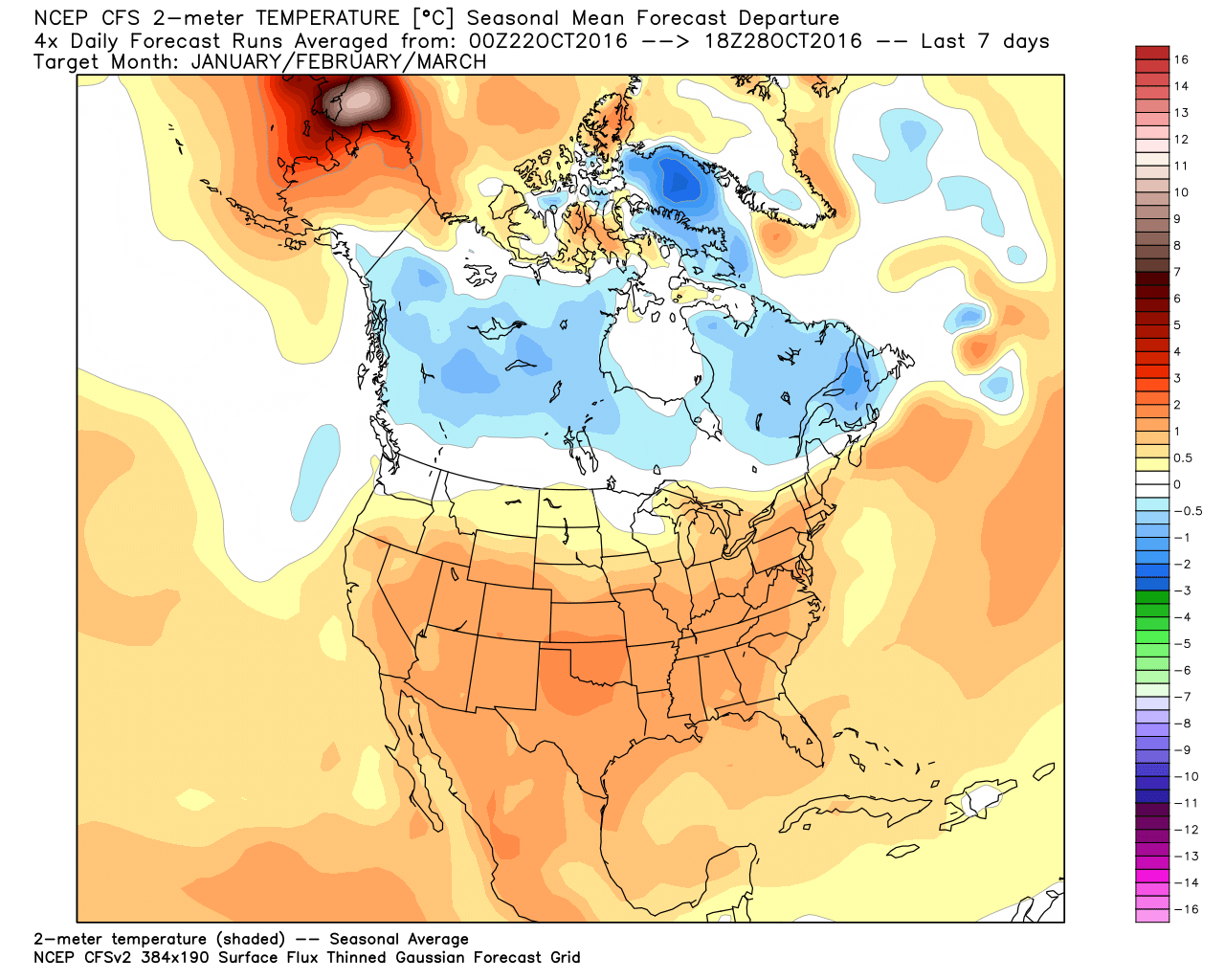 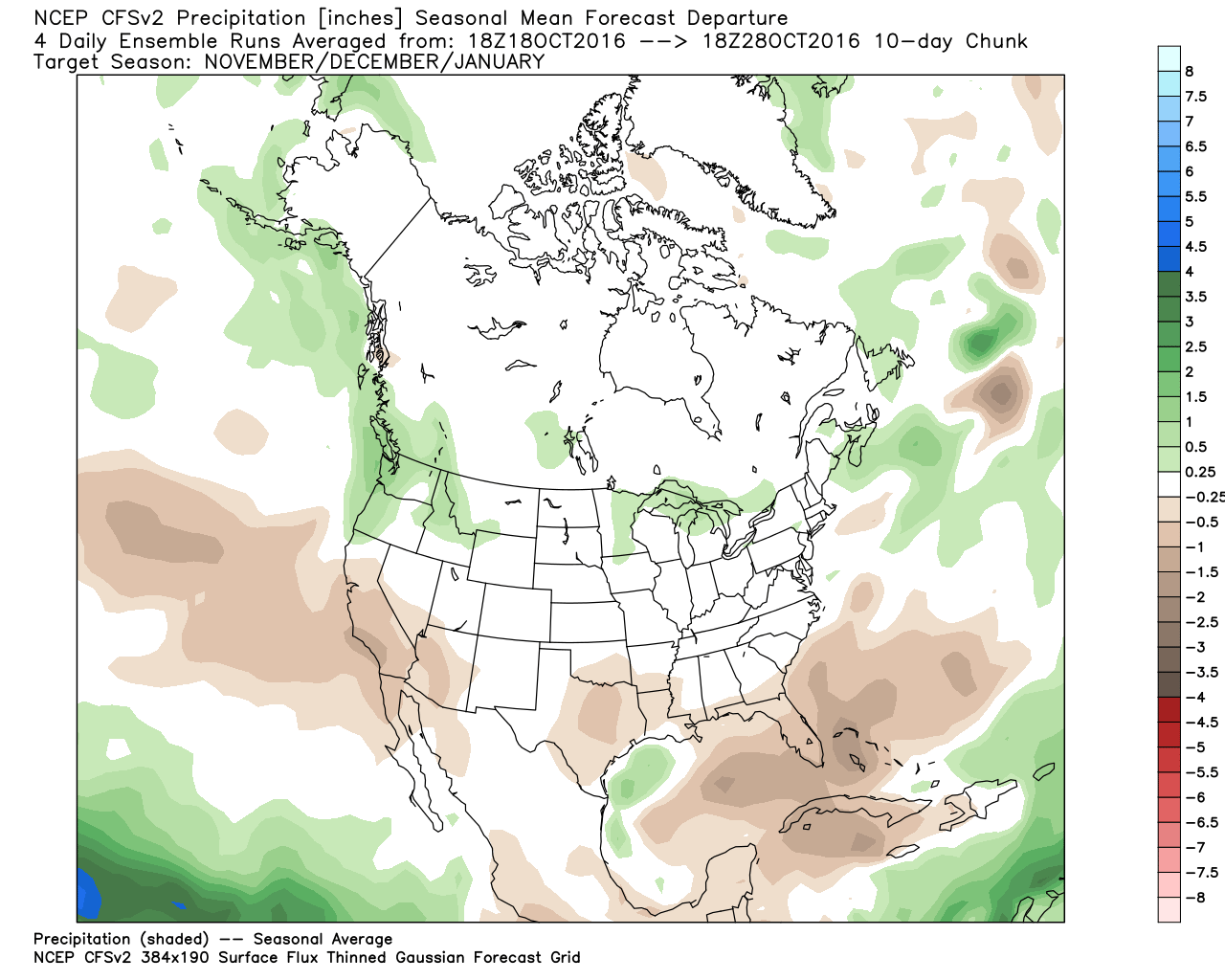 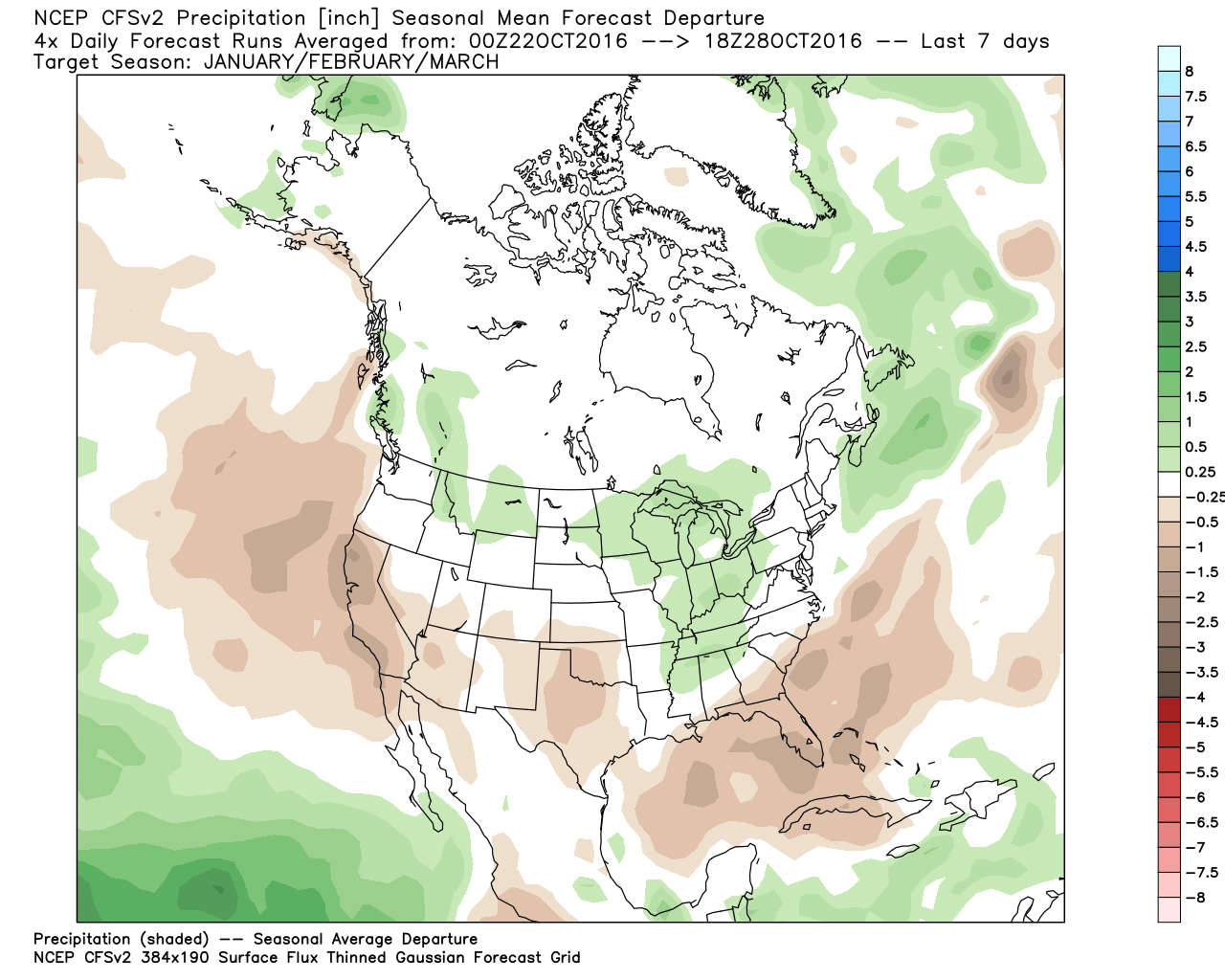 With this particular model, you can clearly see the trend toward a warmer than average winter. While the CFSv2 does not show a terribly dry winter for Colorado, the favored pattern that is involved with the CFSv2 forecast would likely keep areas outside of the mountains drier than average. This is especially true south of the Palmer Divide and I-70 Corridor.

I won't go through every model here but did want to show you the NMME Model and what is is showing. Remember, the NMME stands for North American Multi-Model Ensemble. I.E. it is looking at a bunch of different models. 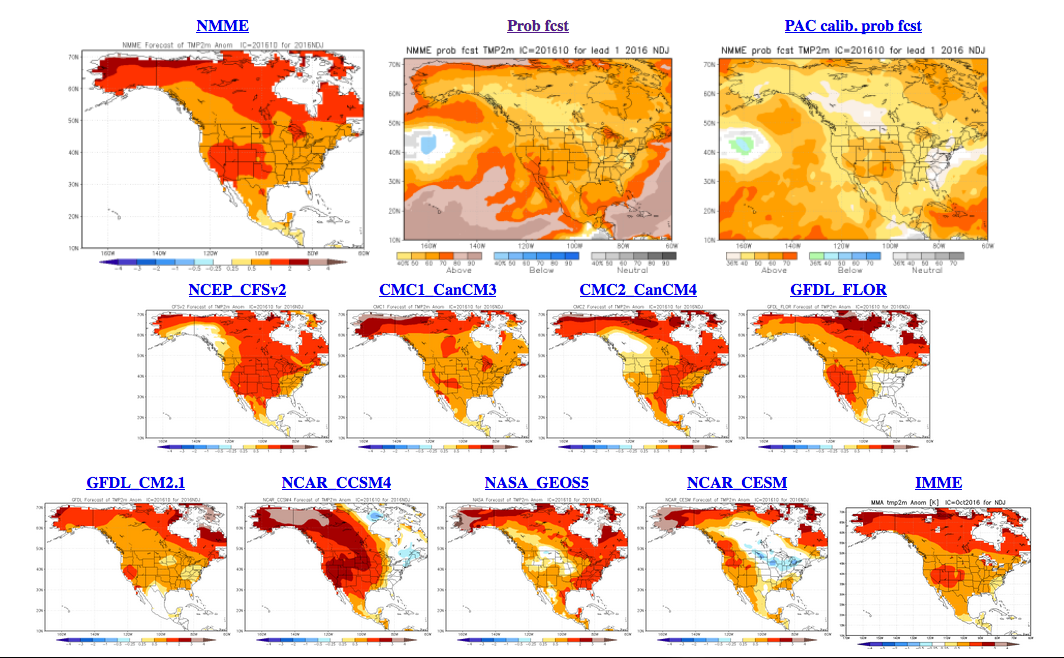 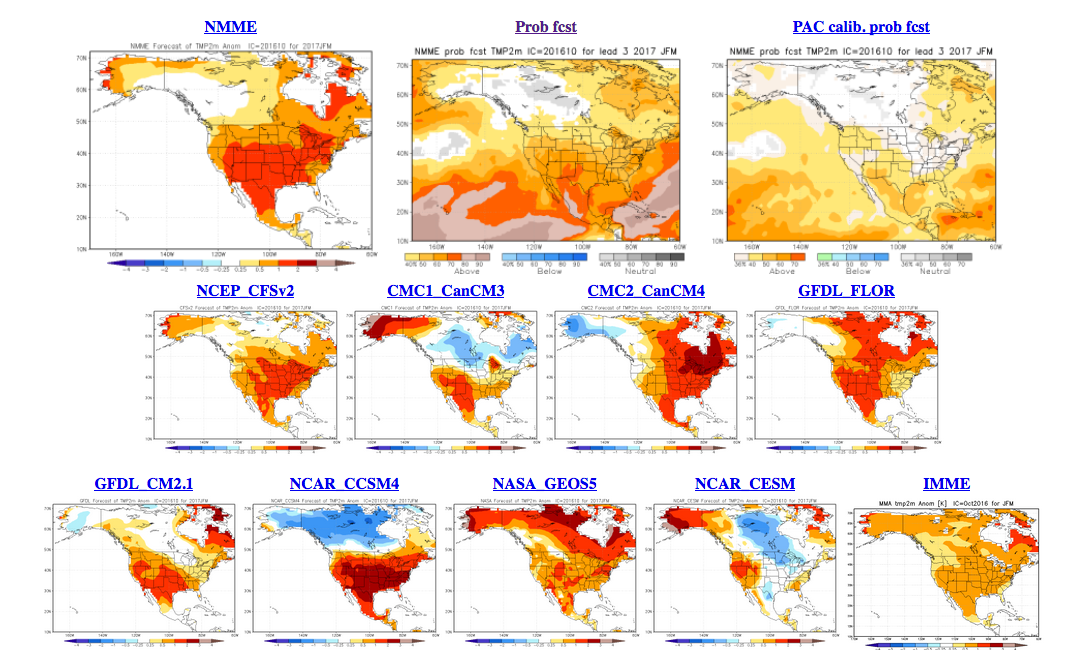 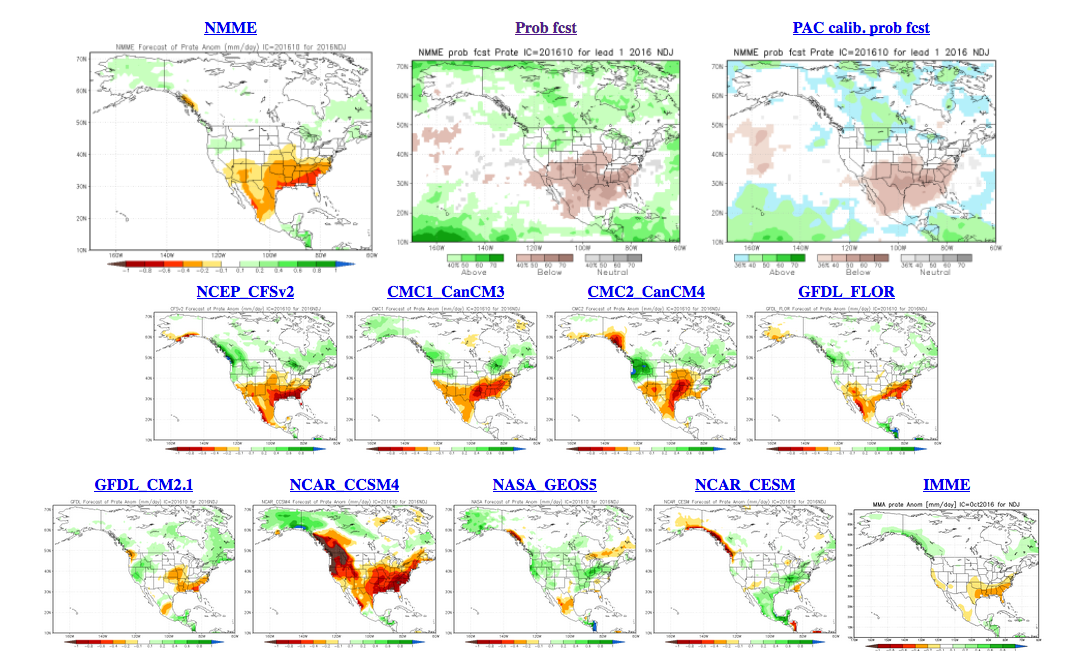 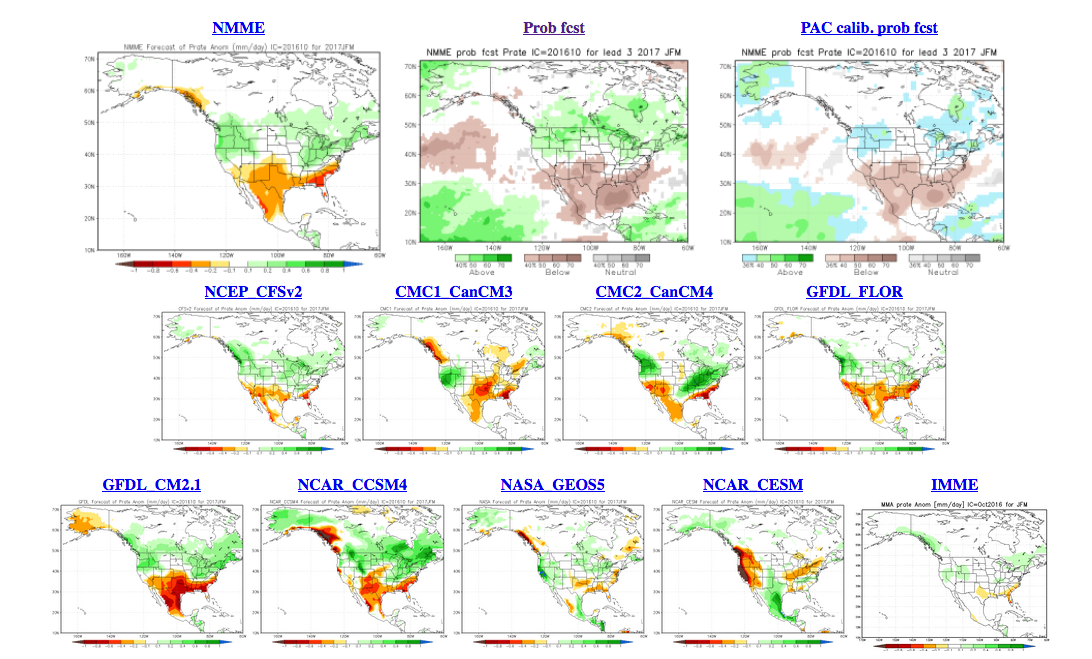 Like the CFSv2 Model, the NMME (which does include the CFSv2 Model) is showing a warm winter. It is also showing a stout dry signal for Southern Colorado and points to the south. Based on the current trend and what is likely to occur in the coming months, I can't disagree with that.

Regarding temperature, I think it is a pretty done deal that our winter will be warmer than average overall. Areas farther east will eventually get cold, but that may also take a while. Snowfall forecasting is always tough and by far the toughest thing we do as meteorologists. However, I think the farther north you live, the more snow you will see this winter. The farther south you live, the less snow you will see this winter. The boundary for this setup will likely be the Palmer Divide and I-70 Corridor. Does that mean Denver sees a lot of snow and Colorado Springs doesn't see much snow? Not necessarily, it could simply mean that Denver doesn't get too much snow, and Colorado Springs sees even less snow. Get my drift? You can find our November - January forecast maps here.

Look it may sound all like doom and gloom, but I do think there is a chance for us to turn the corner in the spring, and of course we won't stay 80 degrees forever. Computer models suggest that any La Niña impact will weaken sufficiently in the spring. The graphic below shows that trend, with the yellow line being the mean of all the computer models sampled:

If we are going to see a period of time that could potentially allow us to see more active and potentially wintry type weather, it would be during the spring. I remain somewhat skeptical, but at least we may have a chance.

If you follow us here at Weather5280 you know we've been talking about this transition for quite a while. We've been very lucky during the past couple of years, and haven't had to worry much about drought here in Colorado. I continue to think our wettest times are behind us for a while, and our attention should be focused on the potential for drought enhancement.

WE RELEASED OUR OFFICIAL WINTER OUTLOOK A FEW WEEKS AGO FOR OUR INSIDER AND PRO CLIENTS. FOR MORE INFORMATION AND MORE IN-DEPTH ANALYSIS REGARDING OUR WINTER AND REGIONAL OUTLOOKS, PLEASE SIGN UP TO BE A WEATHER5280 INSIDER OR WEATHER5280 PRO.