As we've been discussing now for some time with our Insider subscribers, we've finally got a little change to talk about across the region which should finally introduce some more climatologically appropriate temperatures, and perhaps even some snow across Colorado.

First, here's where we've been over the last 15 days – absolute torch across the CONUS, with temperatures running WELL above average coast to coast. 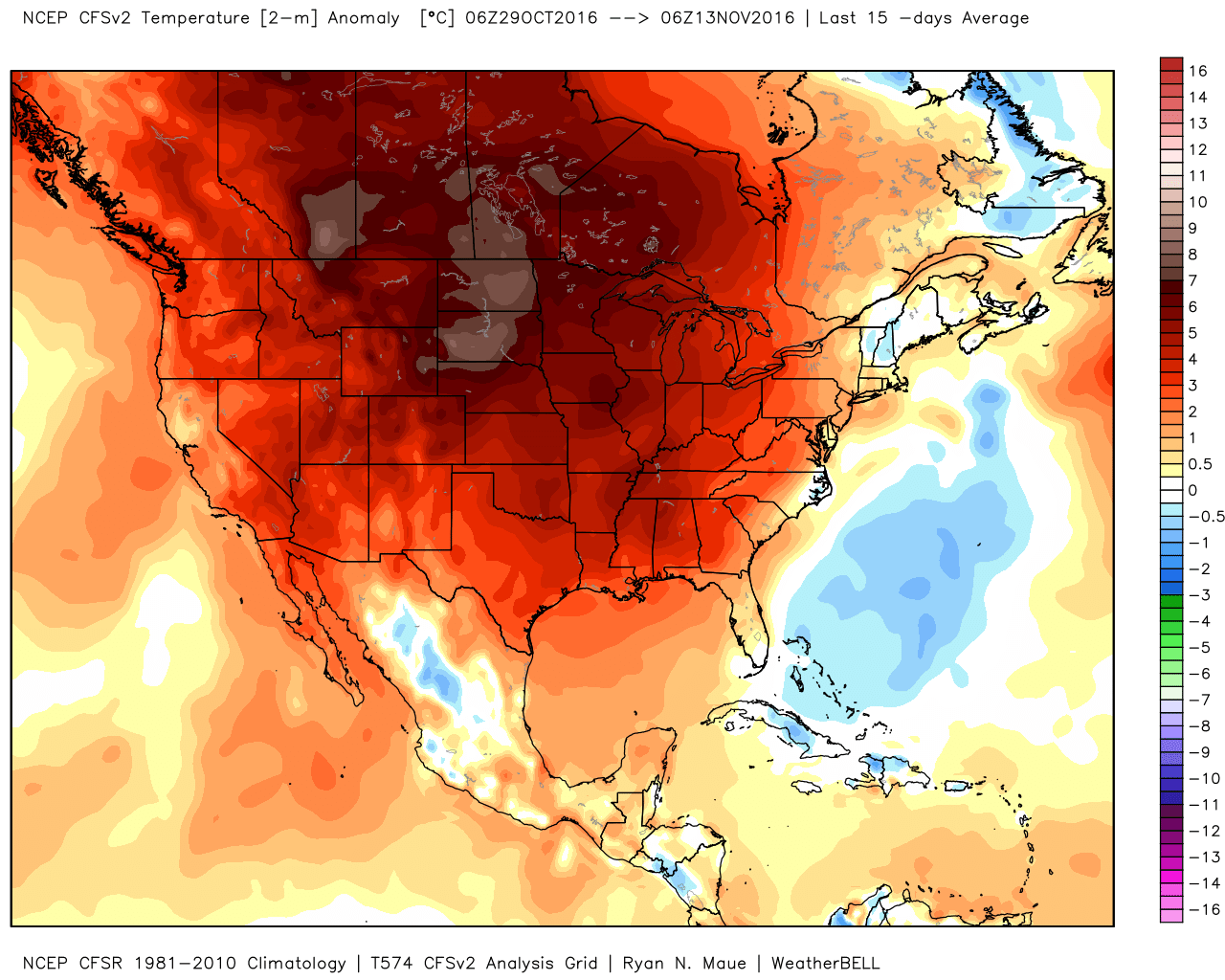 All this thanks to a persistent ridge which has dominated our weather pattern for weeks now: 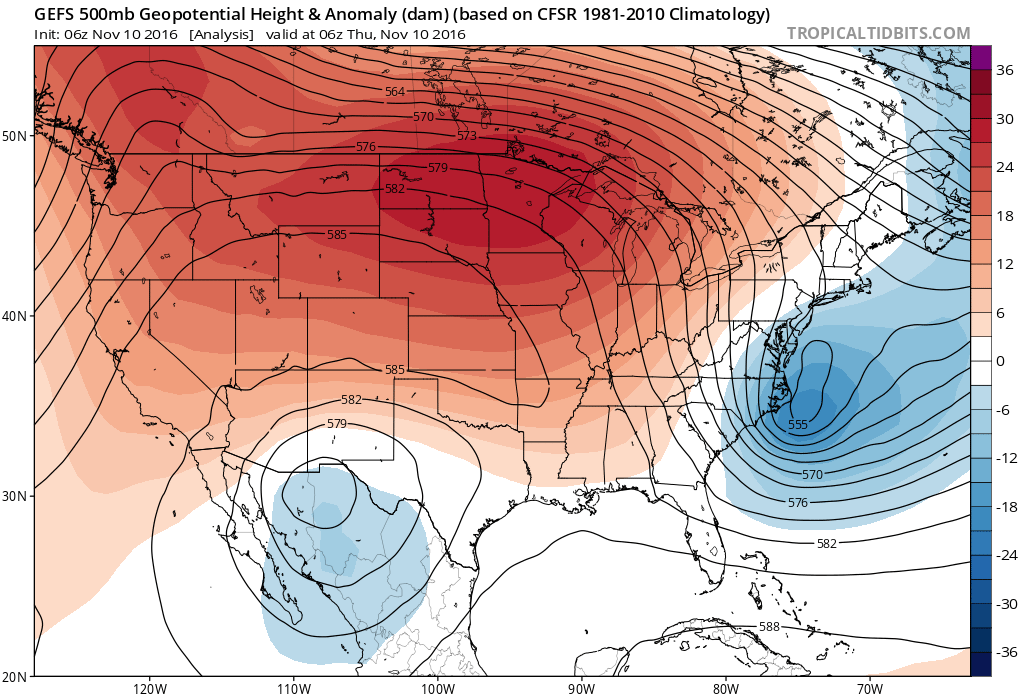 What we see over the coming week, however, is this ridge giving way to a large trough of Low pressure across the west, which will eventually move east through Colorado and the northern tier of the U.S., bringing the first snow of the season for many by late in the week and next weekend.

Below is a look at the mid level 500mb forecast for Tuesday (left) and Thursday night (right). You'll note the ridging across the southwest on Tuesday (we'll see highs in the mid 70s in Denver Tuesday afternoon) gets replaced by a big digging trough across Colorado by overnight Thursday.

This will be the storm system we watch this week. At the moment, it looks like the biggest impacts from this system may miss Denver, with a less-than-favorable track for snow east of the Rockies. The question, of course, is how exactly does this evolve over the coming days, and with that will Denver see its first flakes of the season? Or simply a colder/windier change for a few days.

"Coldest temps of the season"
While the snow potential is very much in question, one thing that looks more certain is the potential for some of the coldest air of the season for Thursday and Friday across Colorado.

Two quick notes here. The first, is while cold, the airmass associated with this trough won't be anything epic, especially for where we are in the year. We're talking temperatures in the 40s for highs Friday, and overnight lows in the 20s – which for November isn't all that impressive of a cold shot. Second, this change will likely be short-lived, with highs back in the 50s and 60s by the weekend.

The animation below shows the arrival of these colder temperatures by Thursday. Note the great amount of warmth (yellows/reds) we see ahead of Thursday, with a dramatic change pushing into the west by mid-week:

If we look at the 0z American model ensemble forecast for the coming week, we can see this very well. The top graph shows the mean temperature forecast (red line) for the coming week. Note the VERY warm temperatures forecast through Wednesday, then a sharp drop off for Thursday and Friday. At the same time, I've highlighted the 32° line and the average low for this time of year, 25°. Despite this push of cold air on the way, we're barely touching freezing, and may not even make it below normal for the date! This speaks volumes for just how warm we have been of late... 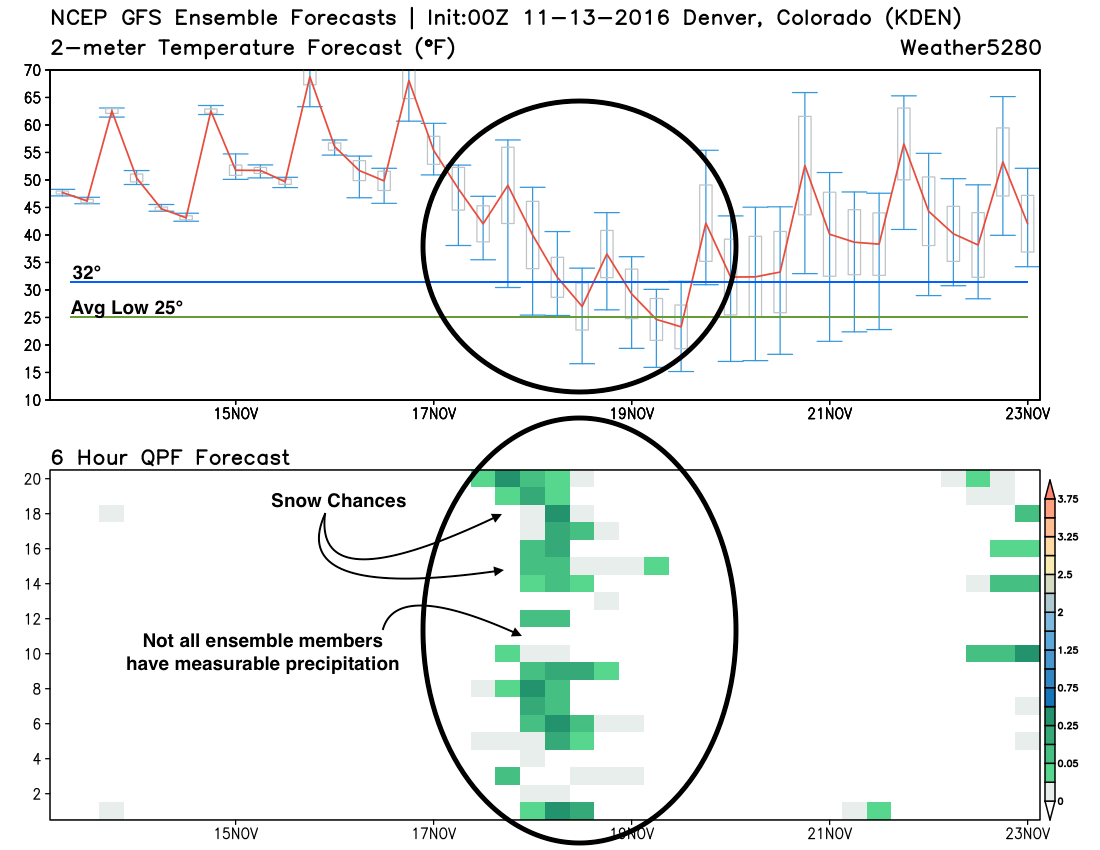 What to watch
So, with all this in mind, here's what you should keep an eye on for the coming week: