As of early afternoon, temperatures are sitting about 20 to 30 degrees cooler across eastern Colorado than the same time yesterday. Our first shot of cold air arrived Monday evening, and we'll see another push of cooler air later today, as well as a chance for snow. 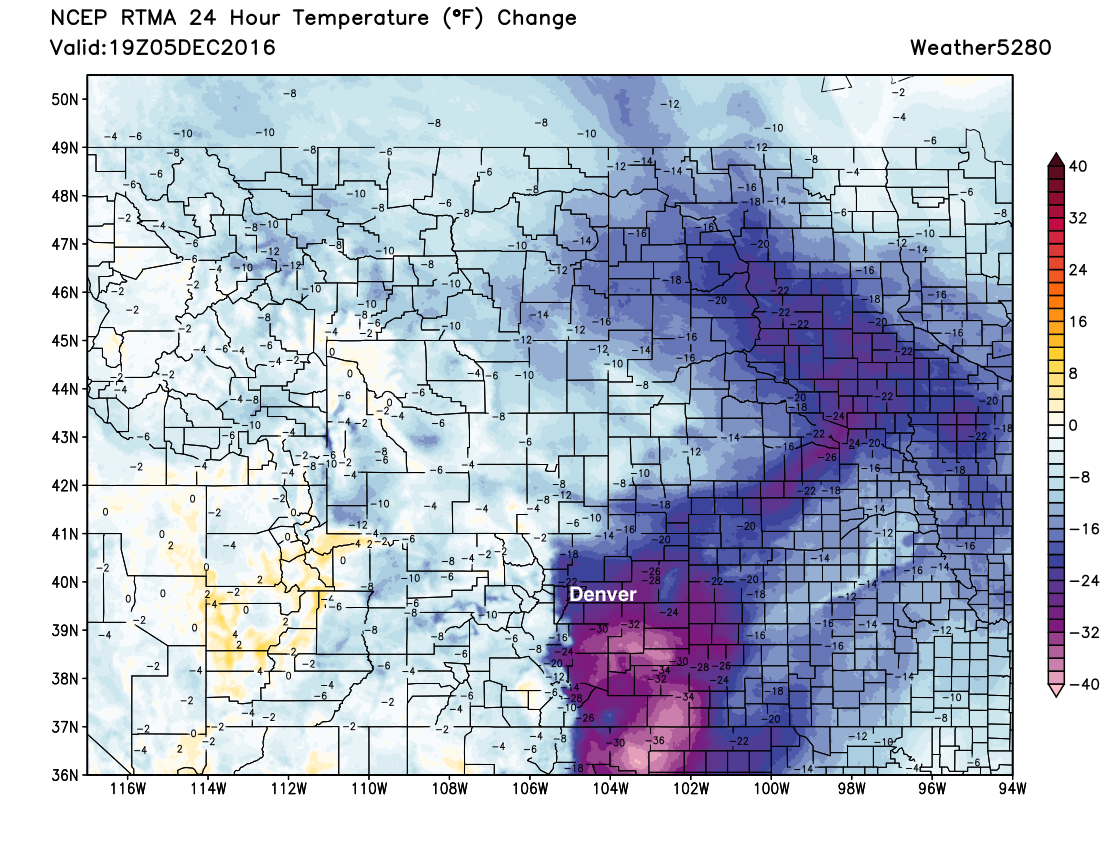 Discussion
No big changes to our forecast today. We are still thinking 2 - 5" is most likely along the I-25 urban corridor, with a few locations seeing closer to 2" and others closer to that 5" mark. While there are still some differences in the models, each has been pretty darn consistent in the last 24 to 36 hours. So we've got the GFS likely producing too much liquid with this system, and therefore the most snow across the metro area, with others like the EURO and CMC remaining much drier. The placement of where the heaviest snowfall occurs is also a bitter difference between the models; GFS focused over the Denver area, NAM/HRRR general north of the city. Needless to say, there won't be an equal share in the higher totals with this system, but most locales should at least see some snow from Colorado Springs north through Fort Collins.

The National Weather Service has issued a Winter Weather Advisory for most of the Front Range urban corridor which goes into effect at 6pm this evening and runs through noon Wednesday. We think the timing here is about right, with the best shot for snow across the Denver area coming later Tuesday and overnight. If hi-res models continue to suggest the heaviest snowfall sets up north of Denver, look for that advisory to be extended eastward of Boulder/Longmont later this afternoon. 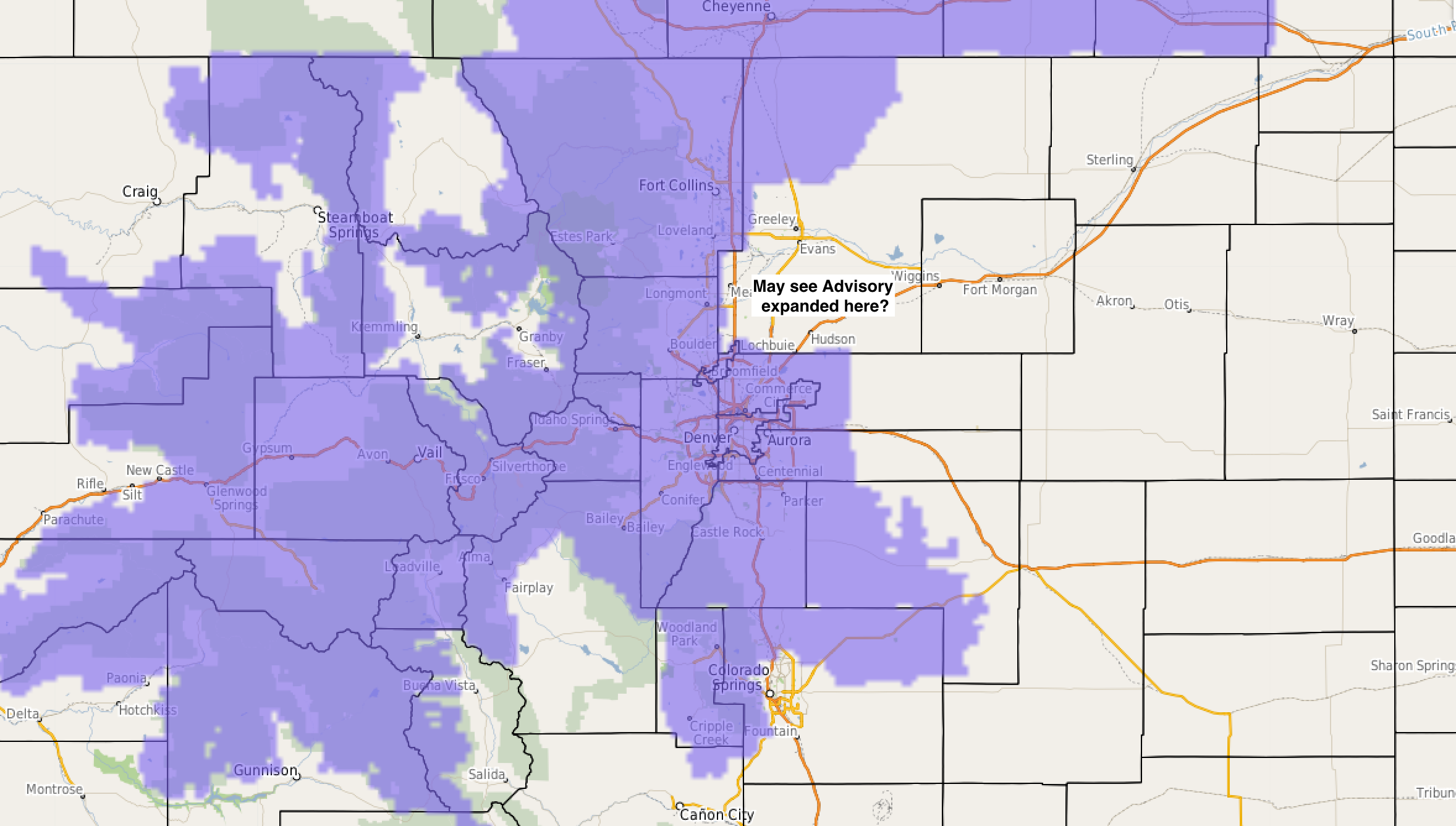 The other story, and for a lot of folks the main story, is the cold. Both NAM and GFS MOS guidance has highs for Denver in the teens on Wednesday, with possibly our first overnight lows below zero in over a year Thursday night, likely depending on how much snow ends up falling. The GFS is coldest, but also snowiest, while other models are closer to 0° for lows. In any event, plenty COLD. Here is the latest NWS forecast for LOW temperatures early Thursday morning: 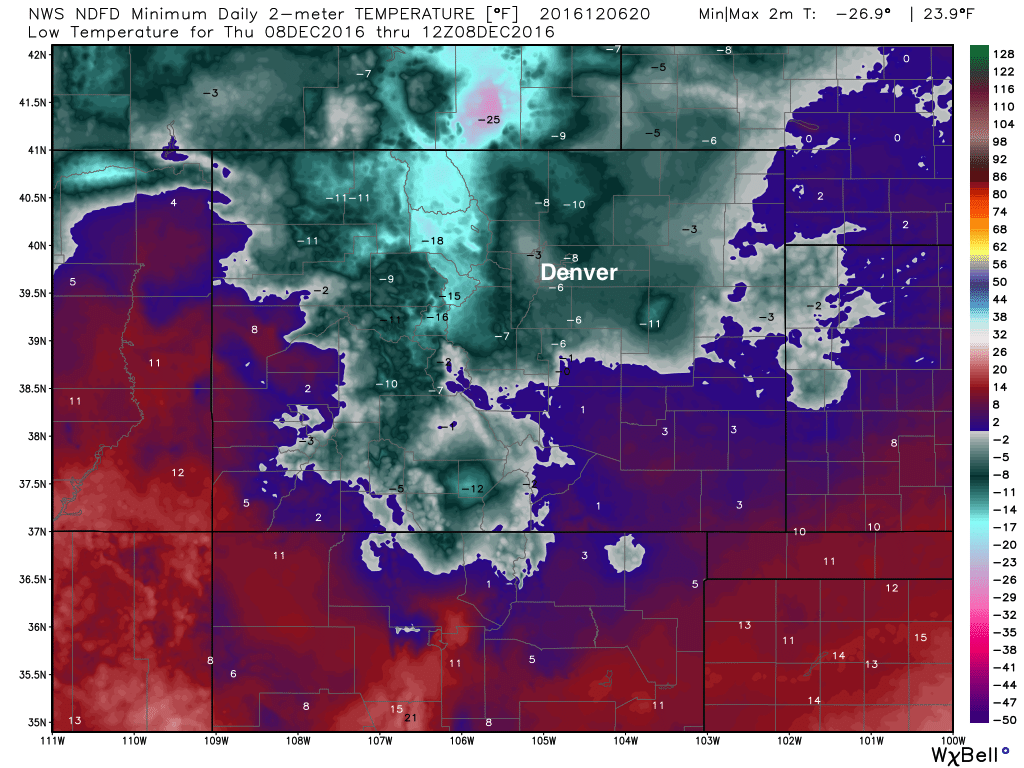 Snowfall forecast update
Again, no huge changes to the going forecast. We've moved the 2 - 5" just east of I-25 north of Denver to account for some of those high-res models trying to put a band of heavier totals between Denver and Fort Collins, and also increased totals a bit south toward Colorado Springs. We've also included Boulder in a narrow 3 - 7" band (yes, we know we're splitting hairs over an inch here), and went 2 - 5"+ across the Palmer where a few locales could do a bit better than 5", though most should sit just fine in the 2 - 5" range. 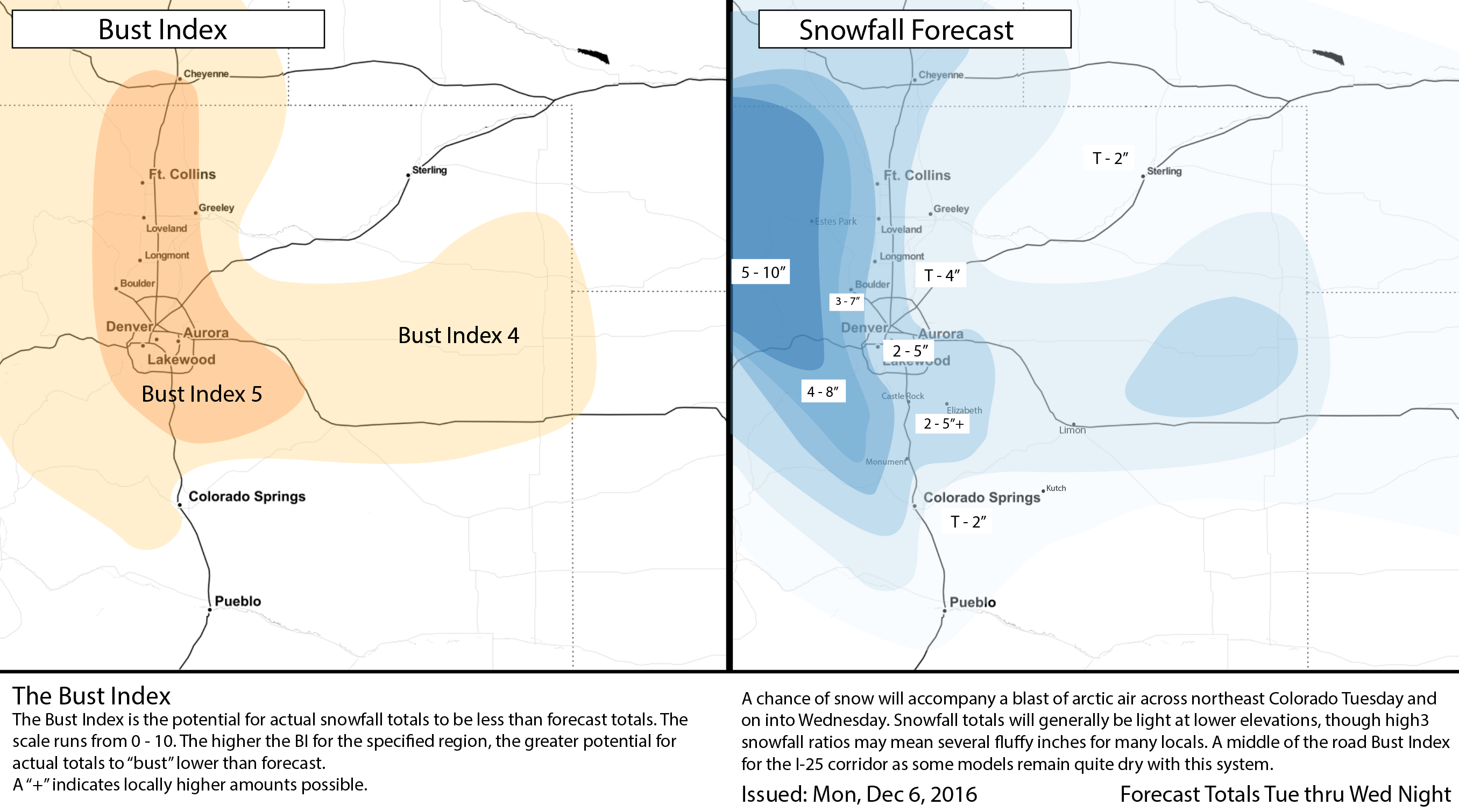 Timing and impacts
If the HRRR is to be believed, snow showers will begin in earnest over the northern metro areas early Tuesday evening and increase in coverage as we head into Tuesday night. Latest observations would suggest this is decent timing, with likely a few snow showers rolling off the Front Range this later this afternoon. Currently it's very dry across the region, so it'll take a while for the atmospheres to saturate and snow to actually make it to the ground. As of this posting, we are seeing pockets of snow around the greater metro area; this activity will increase as the afternoon progresses.

Snow chances will be greatest north of Denver this afternoon, then eventually sag south overnight. Denver's best window for snow may come somewhere in the 7pm Tuesday to 10am Wednesday timeframe, while Colorado Springs may have to wait until Wednesday for better upslope conditions and their best chance for snow.

The below is the latest HRRR forecast through 2am. See how snow fills in for the Front Range foothills, then eventually east across the plains and on into Denver:

With that, Tuesday evening's commute may end up okay for most folks, though if you end up under a snow shower it may get slick and slow for you this evening. The Wednesday morning commute likely ends up the slowest, with the chance of snow continuing and anything that fell overnight making roads slick. Please give yourself extra time in the morning, and keep in mind temperatures will be bitterly cold when you wake up Wednesday morning.

Temperatures remain cold Wednesday and Wednesday night, with slightly warmer temperatures for Thursday, then warming to end the week back into the 40s on Friday.

So, we'll see how this all shakes out! But bundle up, pass along any snow reports, and hope for a GOOD forecast!