After a few very weather-quiet days we have another chance of snow on the way. The system to move in tonight and stick around Friday is the first of three systems that we are tracking now through the middle of next week. Let's focus on this one here.

The Western U.S. has been inundated with another soaking flow of moisture coming off the Pacific. In just one day some areas had nearly 5" of precipitation. Here is the one-day precipitation for the 18th showing you some astonishing totals to the west: 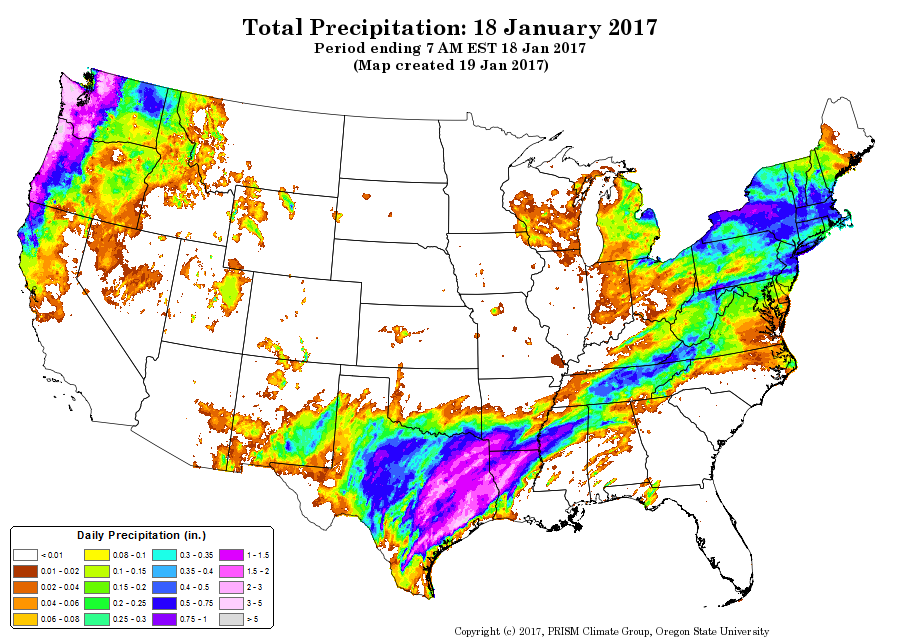 That area of moisture is, as mentioned, a flow of very humid air coming off the Pacific. That moisture river has several energetic pockets within it. Those energetic areas will result in the creation of the three storm systems to pull away from the west coast and head east through our region.

You can see the first of which develop and move through. Note the position of the storm, indicated with the red box, that will scoot from our south to northeast overnight tonight through early Saturday. 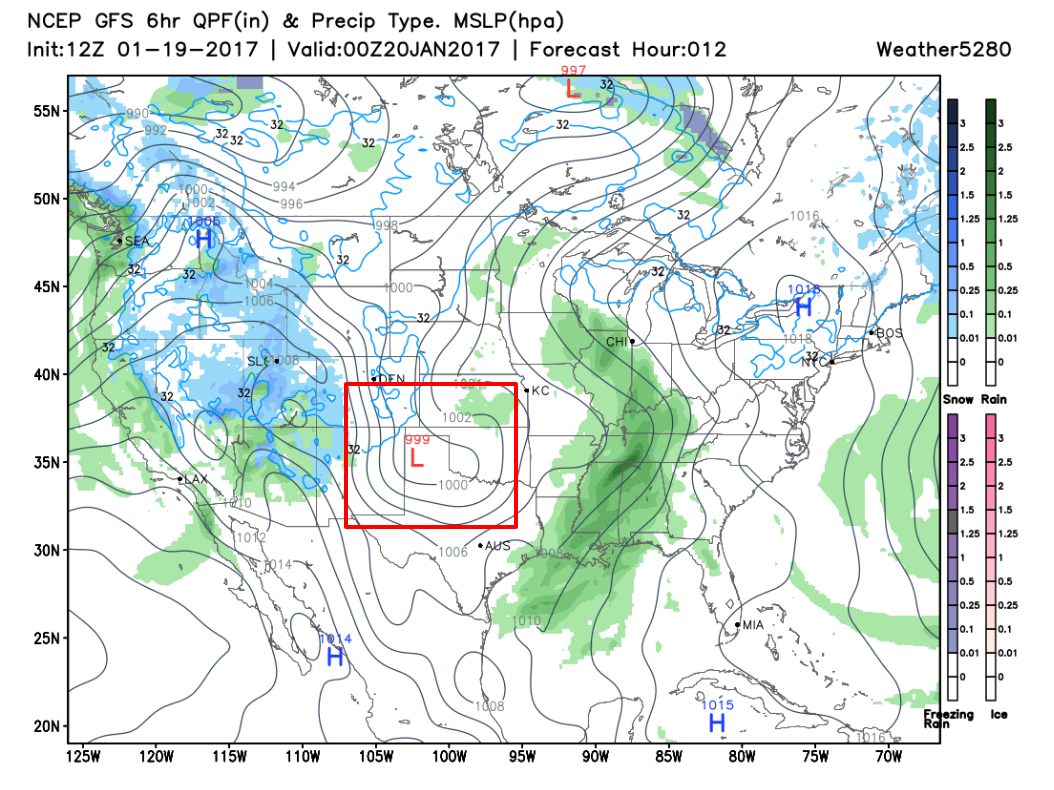 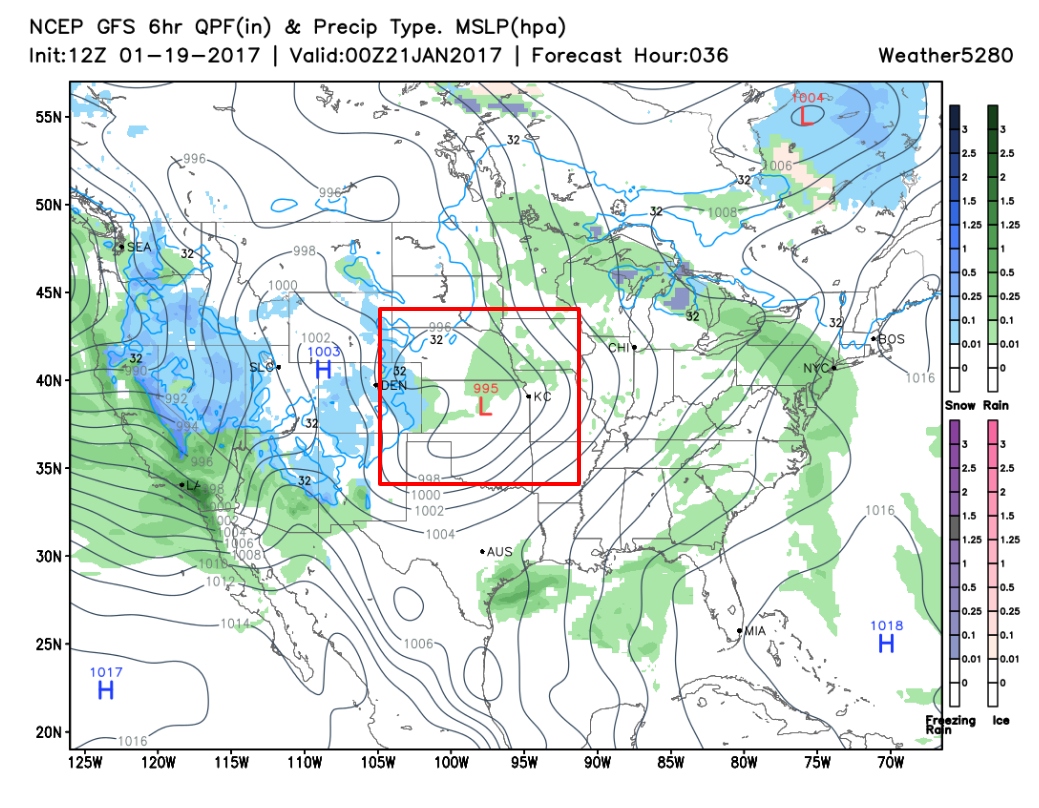 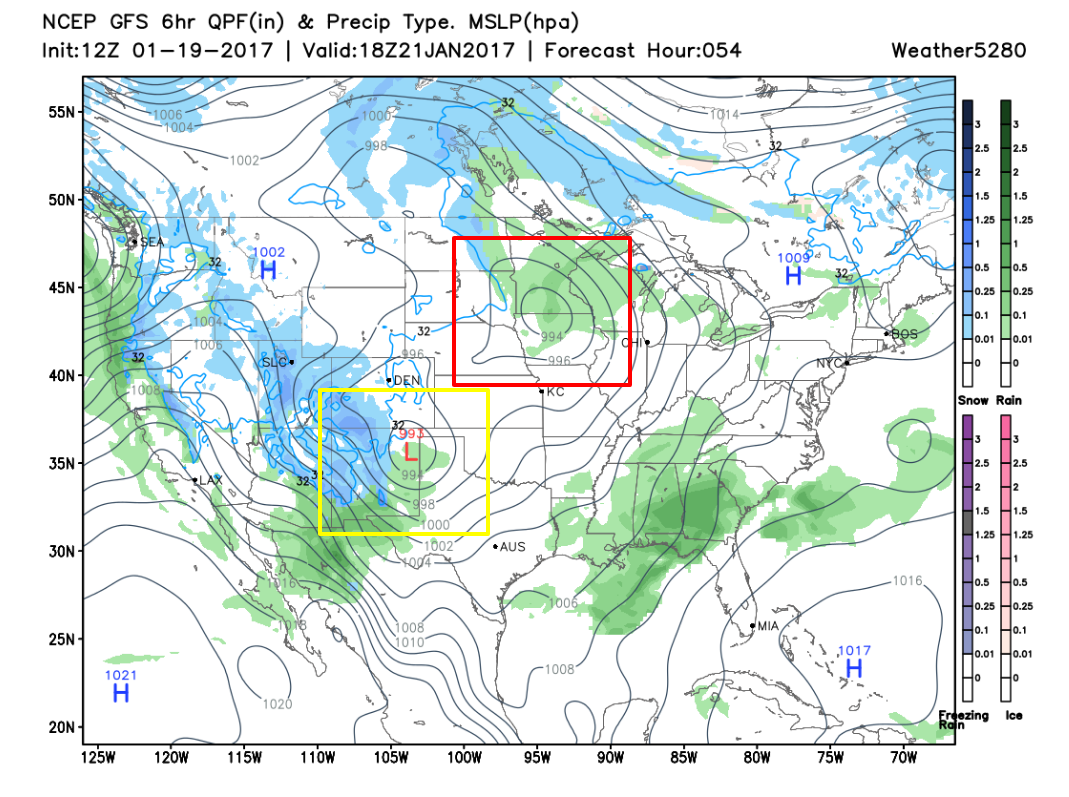 In the final image, the yellow boxed storm will impact the state Saturday. This is the second storm of the series to track. For now, we could see additional snowfall late Saturday across the metro areas. Let's just focus on the first for the purpose of this post.

Snowfall
The mountains will catch the most snowfall out of this first wave. As shown here (through 11pm Friday) most of the mountains will have 3 to 6 inches with some ranges catching 6 to 12 inches; down in the valleys, not much. 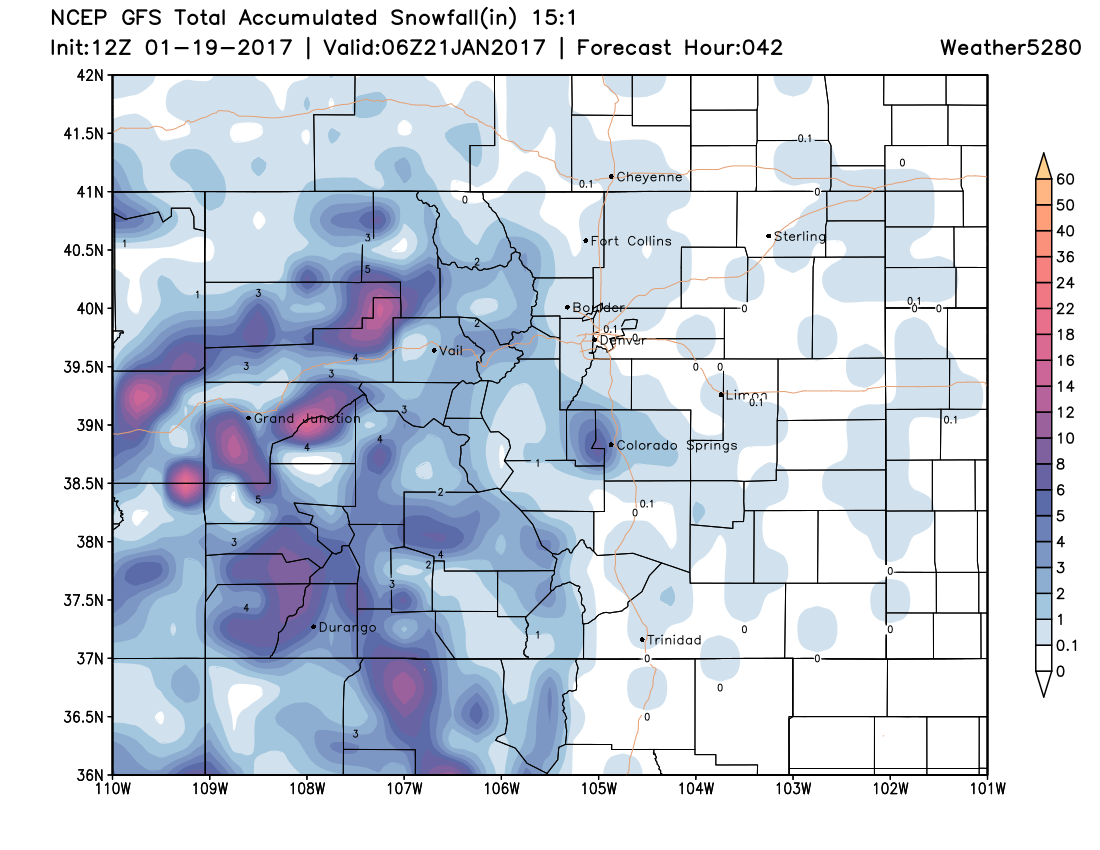 You'll also see contours showing snowfall accumulation over the plains and metro areas too. On this particular model run of the American GFS I wouldn't pay too close attention to the exact numbers of placement of the snowfall.

I say that because as I look at other models, there is a different placement of higher totals and different accumulations. I turn to the Snowfall Gambler Charts and see there's definitely a favored zone of accumulation which is on the Palmer Ridge. Elsewhere, a drop in the chances of much accumulation. Here is Castle Rock's probability of indicated snowfall amount, a dusting to 3" is the most probable range but 4" also carries a bit of a probability, too: 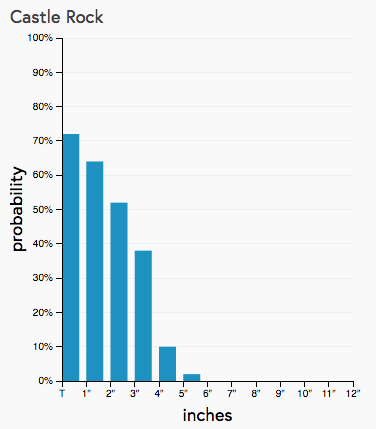 Weighing the probabilities and all modeling we have chosen the following snowfall forecast as our best fit: 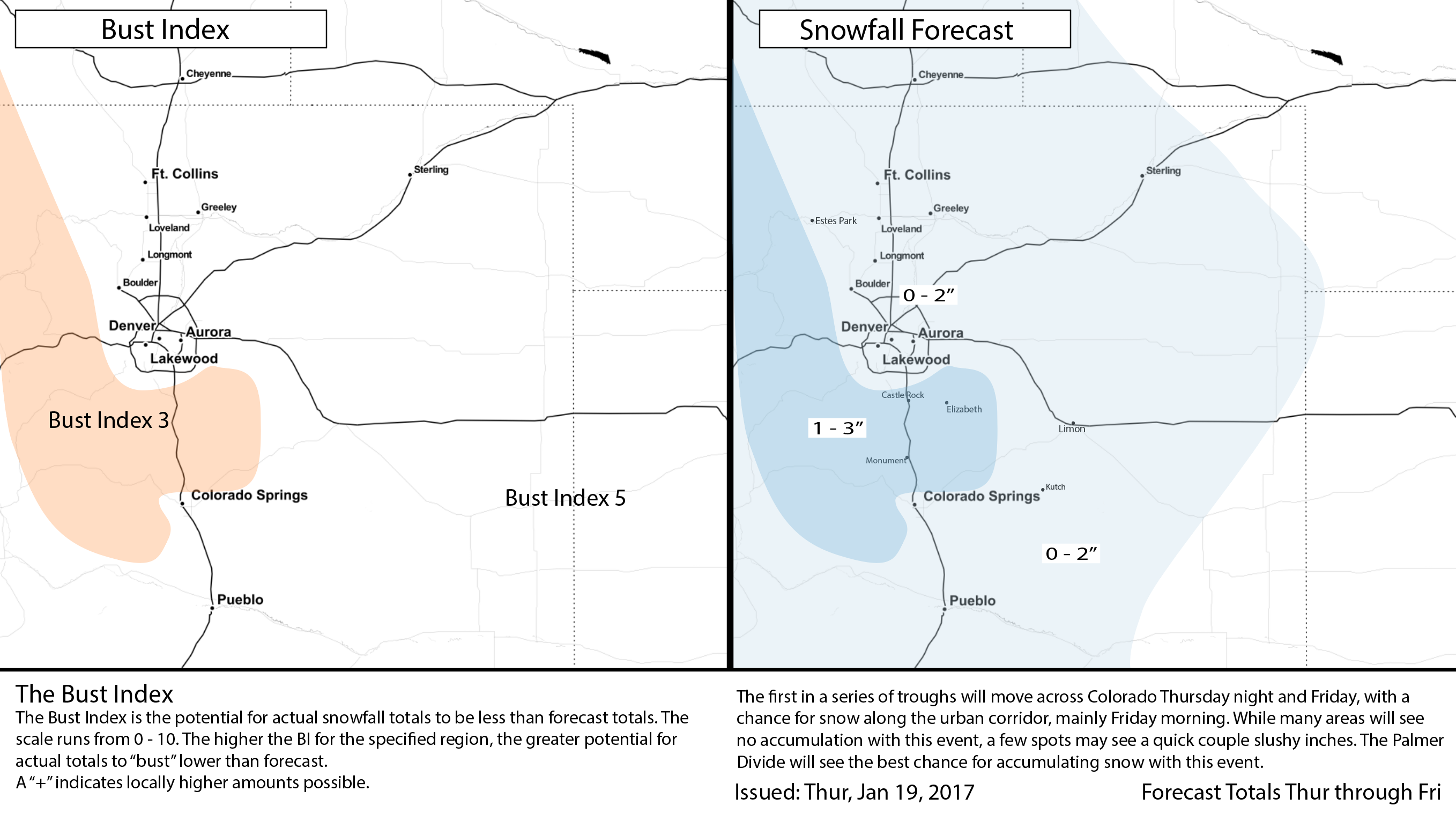 Impacts
Let's consider the temperatures firstly; morning temperatures in the 20s and afternoon temperatures in the 30s. That equates to a wet slushy snow, for areas where snow actually falls. (The overall chance of snowfall up and down the I-25 corridor is highest near Castle Rock - 70% - and lowest near Fort Collins - 50%.)

In fact, given how warm temperatures will be (relatively), it could be some locations see more rain than snow Friday morning. Clearly, should this be the case where you are, not much snow will accumulate for you. Some of the hi-res models show this, with a bit of rain over Denver, while all snow over the Palmer. Certainly a possibility. 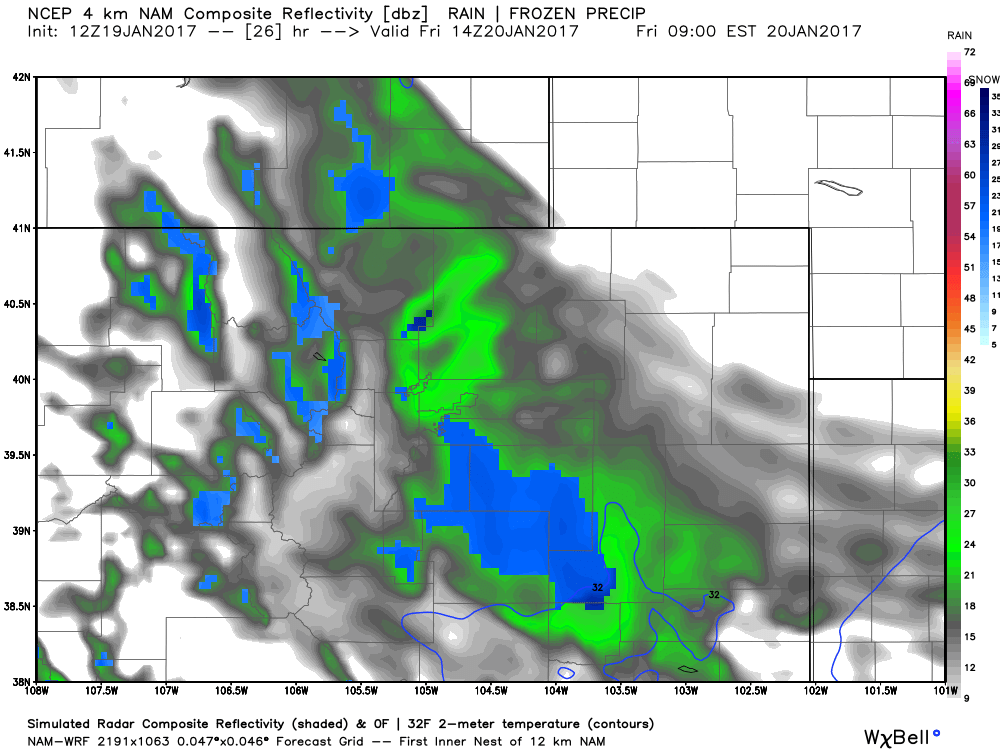 The timing of this rain and snowfall will be a start between Midnight and 5am, and an end in the Mid-Afternoon Friday (give or take a couple hours depending on your metro area location). So, the morning drive is most likely impacted. Again, that's for those areas where snow actually falls. South Denver to Monument will likely be the focus of CDOT's attention in the morning.

Again, temperatures are warm with this one so what falls won't last long. Denver's low will be in the 20s and high near and above 40.

The mountains will have road/highway sections that may be slow going and that will continue overnight through Saturday with the combined effect of the next two storms.

Saturday's Snow
We will give you an update on Saturday's snow chances, if needed, by Friday pm. If could be this one favors mountain locales even more, and no update will be needed. Stay tuned!