Not a lot of change to our thinking in yesterday's update. Still tracking much cooler air for the first part of the week, as well as a chance for some light snow along the I-25 urban corridor.

This morning's run of the EURO has come into better agreement with what the other models have been showing for several days, which lends to our confidence this won't be a big deal on the snow front for most people.

Fort Collins may be a bit of an exception here, with highest probabilities for a few inches of snow from Monday night through Tuesday. It really will depend on where this main snowfall band sets up – if it does so over the city the Fort stands a good chance at seeing several inches of snow, if it ends up a bit north or south, the city won't see much.

Further south of Fort Collins we'll also be dealing with some banded snow showers, which means while some could see some light accumulation, others won't. Hard to pinpoint where exactly those bands end up. Instead, we'll broad-brush totals a bit and emphasize a lot of variation in totals from city to city, neighborhood to neighborhood.

Snowfall forecast
The snow chance picks up to Denver's north Monday night (it could be we even see a bit of rain Monday afternoon and evening), with that chance expanding south through Tuesday and Tuesday night. For those in Denver and south, we may see some mixed precipitation Monday night and Tuesday, which could lead to icy roads even if little snowfall for your Tuesday commute in south Denver, the Palmer Divide, and on into Colorado Springs.

For totals look for an area of heavier totals somewhere in the Fort Collins to Cheyenne region, with lighter totals from Loveland south to Colorado Springs. Totals will look like this: 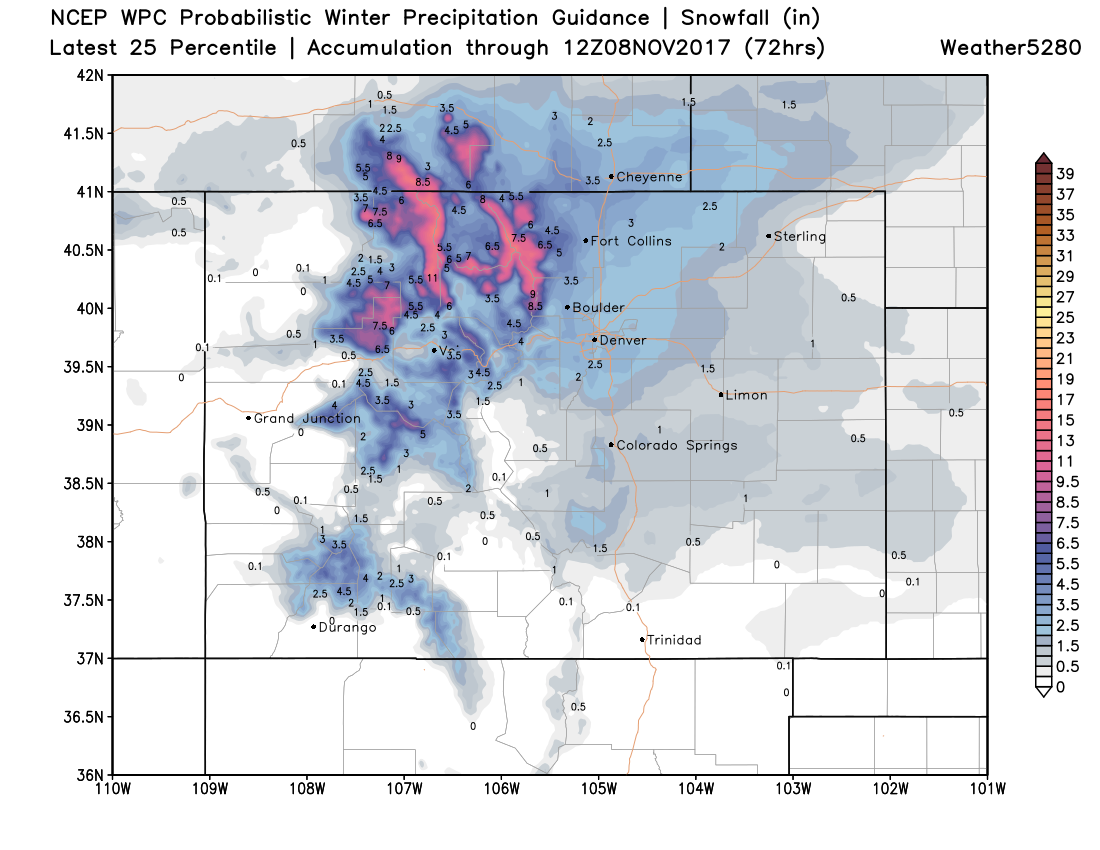 Timing
We've already seen the initial push of cold air move in today, with mostly dry conditions for the remainder of your Sunday aside from a few stray showers.

Monday we'll again see cool but not cold temperatures across the region, before a push of colder air moves in and and we see that chance of rain, snow, and mix increase for Monday night and Tuesday.

The best chance of snow for most Front Range communities will come late in the night Monday and during the day Tuesday, with snow chances decreasing from north to south Tuesday night.

Highs Tuesday will be near freezing along the urban corridor with occasional light snow.

Wednesday the sun returns and we'll warm into the 40s in Denver. By Thursday highs should rebound back into the 50s across northeast Colorado under dry conditions.