It's hard to believe we're wrapping up the last weekend of November with kind of weather we've seen of late. Temperatures have been well above average, snow is a word we're no longer familiar with, and yet here we are.

Temperatures will remain well above average through Monday, with the possibility of record high temperatures along the Front Range Monday afternoon. The record high in Denver for November 27th is 74°F degrees set back in 1950 and 1903. MOS guidance has highs in Denver in the 74 to 76°F range tomorrow, so a new record will certainly be possible.

This is really par for the course, with Denver getting set to end yet another month with temperatures well above average (currently sitting at 5.5°F above average) despite a cool down headed our way for the final days of the month.

The week ahead
After record (or near-record) highs forecast for Monday, more seasonal air arrives for much of the remainder of the week.

As Matt discussed in our Insider update on Friday the upcoming period will feature a couple of chances for snow (however small) east of the mountains, in addition to more seasonal temperatures as well.

The first chance of rain and snow will come Monday night into early Tuesday along with a cold front that will drop highs from the 70s in Denver on Monday to the upper 40s/low 50s for your Tuesday. This, much like our last handful of systems, looks to be a pretty low-impact event, with just a 30% chance of rain/snow for the Denver area at this time.

The greater impact instead will be the strong cold front. Strong wind and a reminder of what month it actually is should be on your radar for Monday night and Tuesday.

As for how much snow? The potential is there for a quick coating to 2" along most of the Front Range, but for most little or no accumulation is expected. Foothill locations, and across the Palmer Divide stand the best chance at seeing a quick inch or so, but again – not a huge snow maker on the way, just enough of a change that we will feel it.

Our second snow chance may come Wednesday afternoon/evening with another quick-hitting cold front. Highs Wednesday will climb into the upper 50s, with the cold front again knocking us down to around 40 for Thursday.

Snow chances with this second system don't look all that impressive either, but chances what precipitation does fall falls in the form of rain is lower. That said, not expecting much accumulation with this one either, but the potential will be there for another light snow event. As you can see in the image above, currently modeling doesn't have this wave as "deep" as the first, and we already have established the first won't be packing much of a punch snow-wise around here.

We'll see a drying and warming trend as we head into next weekend, with highs back in the upper 50s for Saturday and Sunday, with a southwesterly flow aloft drying us out again.

Below is a look at modeled snowfall for the week in its entirety. Again, nothing huge in the snow department, but perhaps some light accumulation from the two events in and around the Denver metro area. 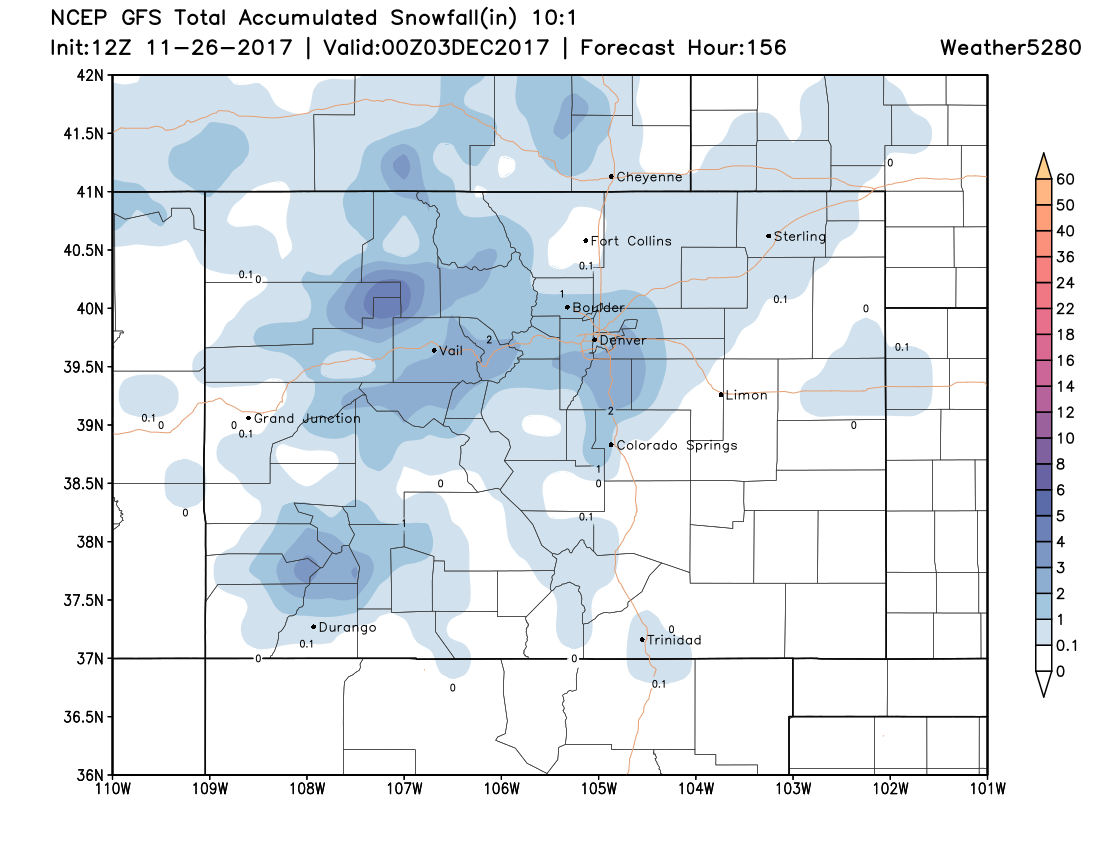 Extended period
Looking down the road a bit... it does look like we're entering a period of at least mildly more interesting weather as compared to the last few weeks. Models indicate the PNA going negative (if briefly) around December 3rd, with the AO/NAO going negative thereafter, suggesting some colder times ahead for the plains east.

The question is, will we be able to capitalize on some snow as the ridge shifts into the west and the PNA goes positive after the 5th or so. Models are struggling a bit with this, but showing the door open to something coming through during those first few days of December, so worth keeping an eye on.

Below is a look at the 500mb pattern during the first days of December. This indicates a period of good snow and cold across the intermountain west: 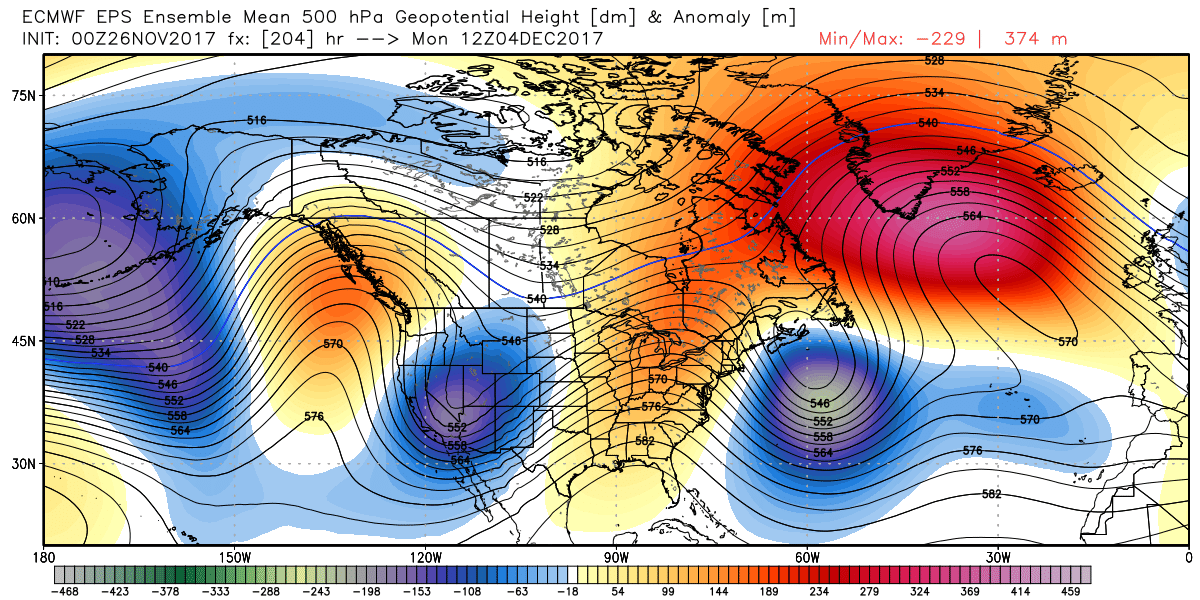 After that, the trough transitions to the east, with ridging taking hold in the west as we head into the middle second week of December. This would equate to the potential for colder temperatures from eastern Colorado east, with details of course still to be determined. This would not, however, necessarily be a great setup for snow around here either. Here's a look at the GEFS 500mb pattern for the 11th of December, with 5-day temperature means at 850mb as well. A much colder pattern across the eastern two thirds of the United States to be sure. 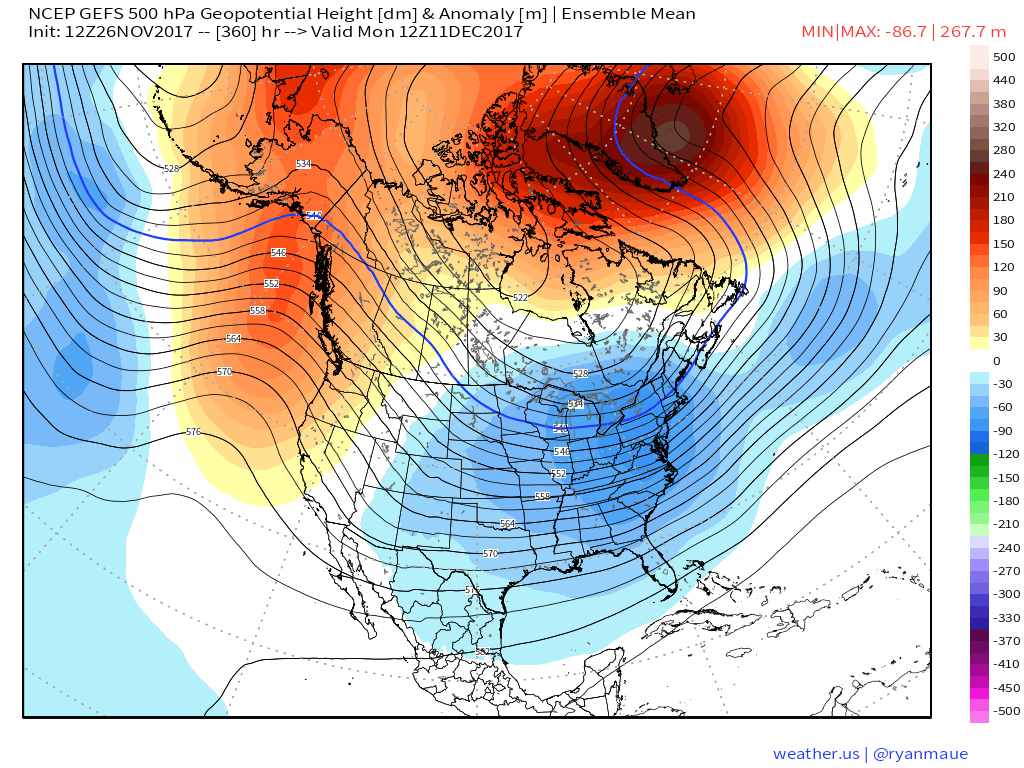 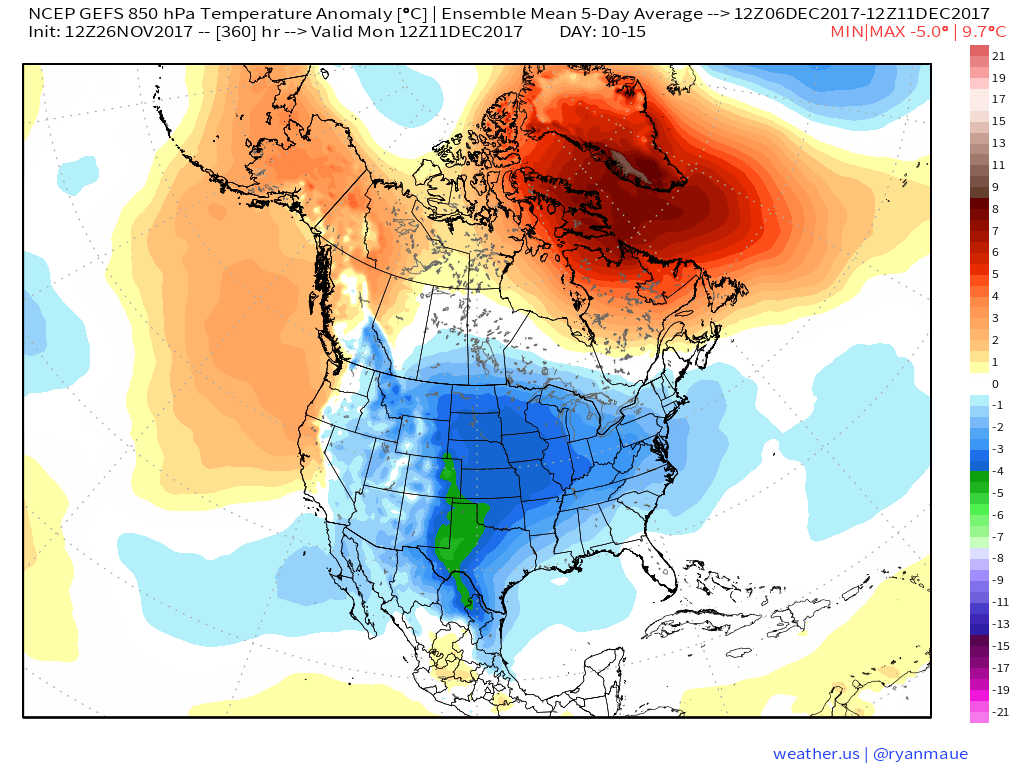 So, the pattern right now isn't all the favorable for snow or cold, and the pattern coming down the road may be more favorable for cold but not snow. The question is if we can get something more significant to move through here during the transition, and that's what we'll be watching for in the coming days. It may be a narrow window.