A wonderfully cool day in place across the region after last night's cold front, with highs in the 70s across the urban corridor and plenty of cloud cover. Early afternoon temperatures show cooling for much of the state today, the exception being southeast Colorado where temperatures have once again climbed into the mid 90s. Take a look at the impressive dew points across northeast Colorado last hour, with many 60+ readings showing up across the region, indicative of the good moisture in place:

The question, of course, is will it finally rain? The answer is, I hope so. The week ahead features some additional rain chances, but also a return of the heat by mid week, so no time like the present to take advantage of the moisture.

Flash Flood Watches continue to litter the Four Corners states, with those watches including the Front Range and urban corridor through this evening. The Flash Flood Watch remains in effect through 9pm this evening, with the best chance of rain in the city likely coming during the late afternoon/early evening hours. 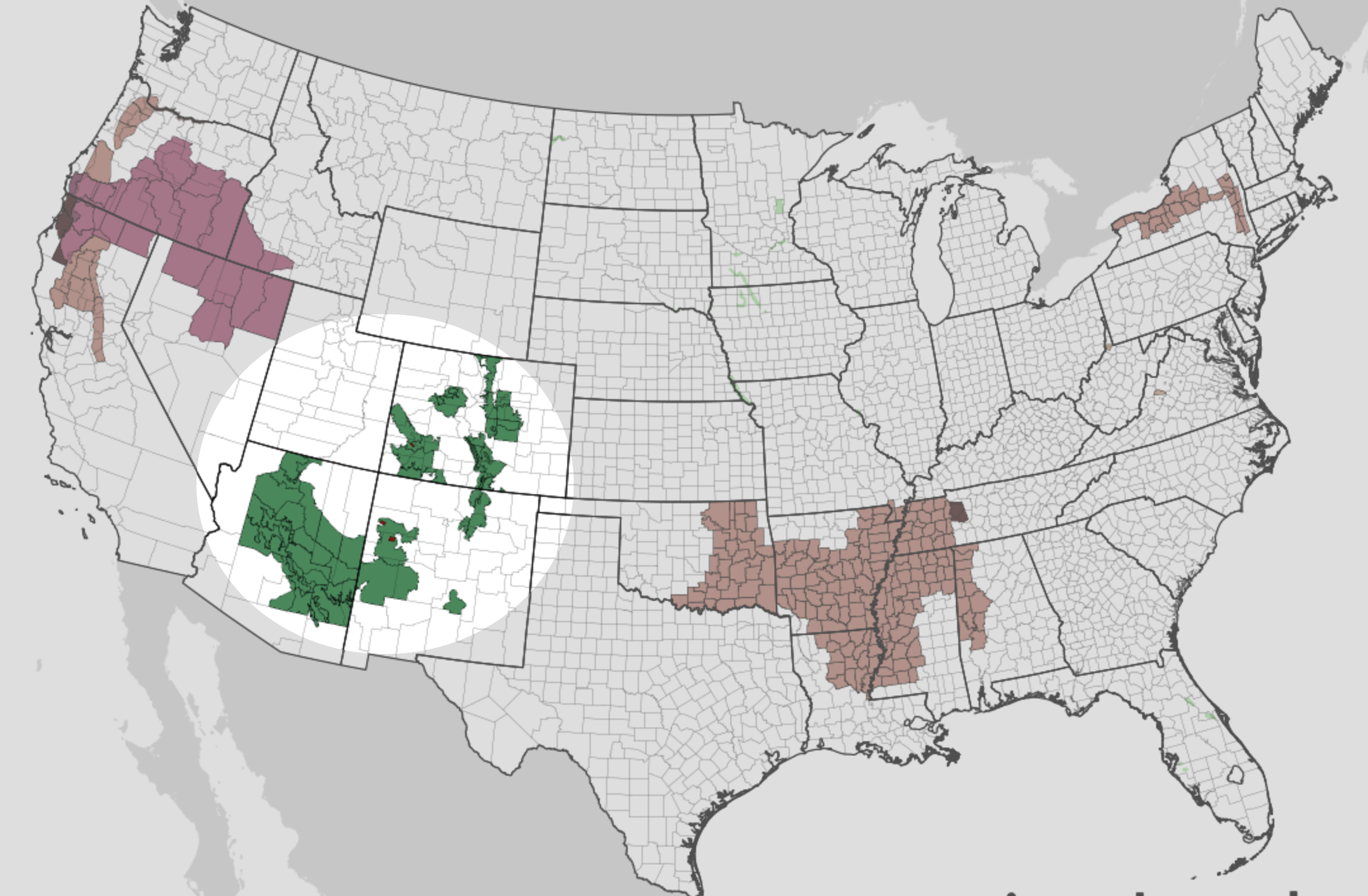 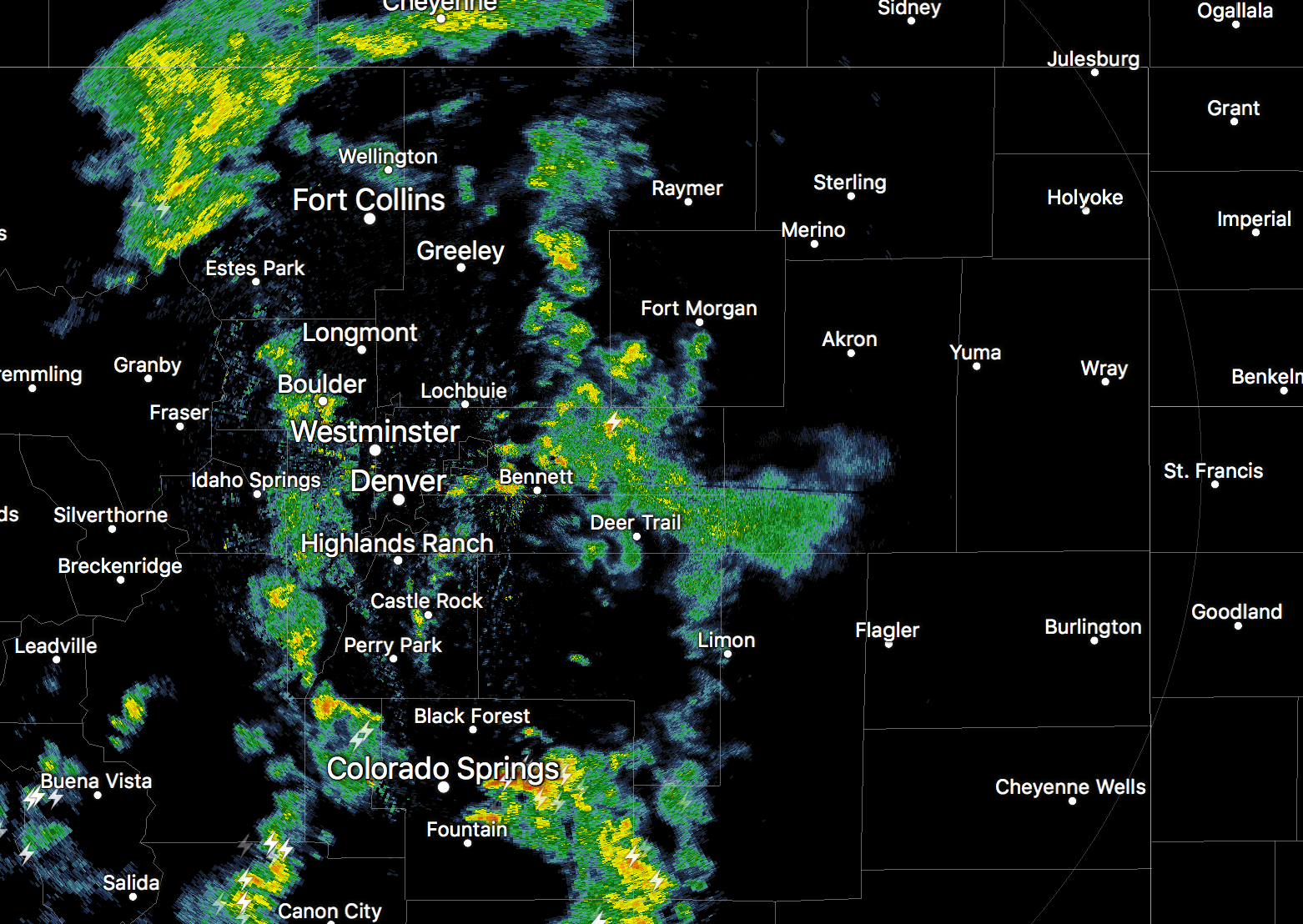 This will be the development to watch over the coming hours. The HRRR shows these storms spilling off the foothills by 4 or 5pm, greatest chances in the 5 - 8pm window, then dying off later this evening: 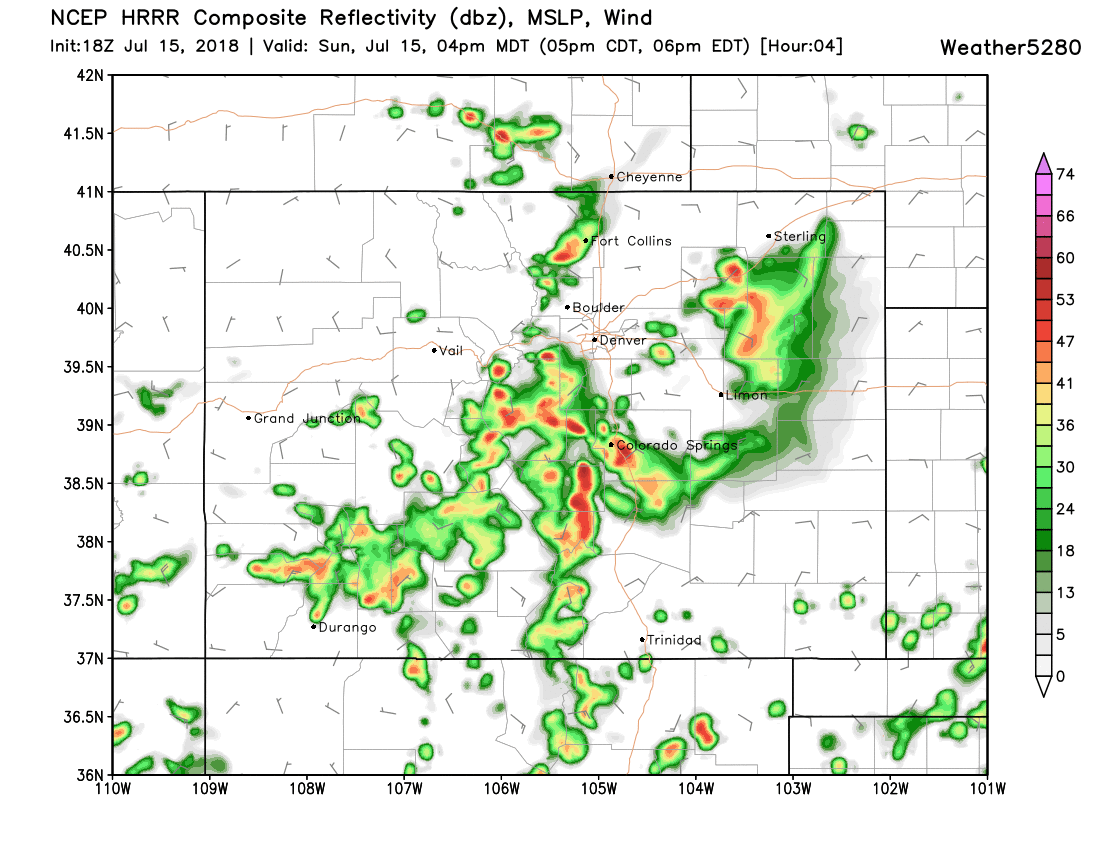 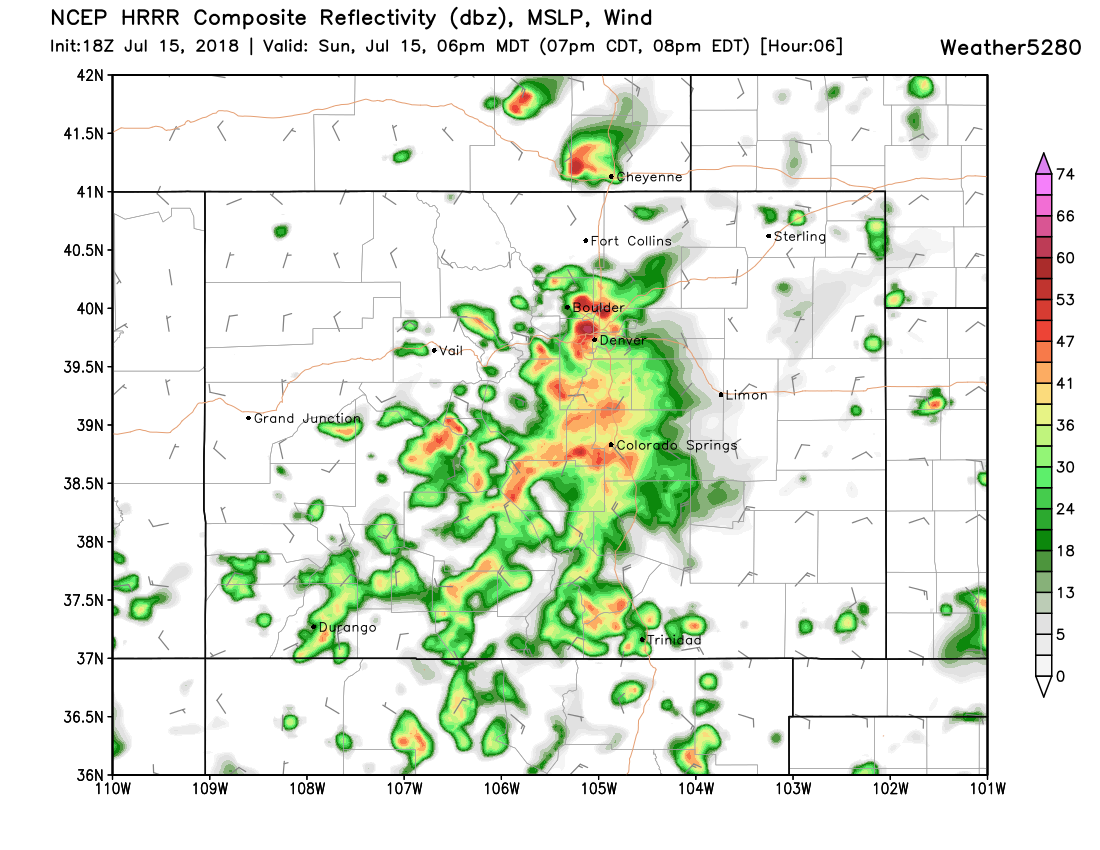 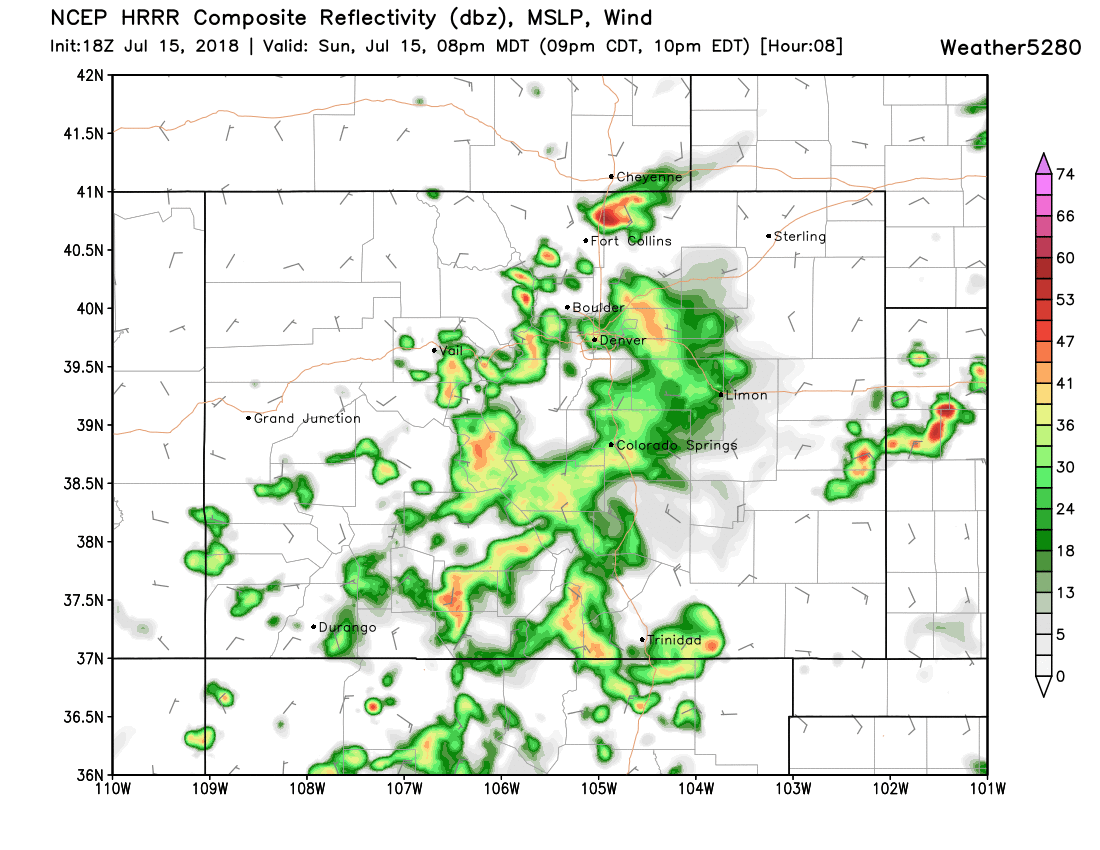 Its latest runs continue to show more and more favorability toward the Palmer Divide, and a drier bias north. The EURO today showed a similar look as well, and actually kept Denver mostly dry and storms south/southeast. Latest observations would suggest we're still in the running for storms later this afternoon, but something to watch.

For those of us that do manage rain, flash flooding will be a concern. With any storms that do develop today heavy rain will be the primary concern, with low lying areas and poor drainage areas being primary concern for that flash flood threat.

For those of us that miss on today's rain... well, there will be rain chances tomorrow and Tuesday as well, but overall lower across the Front Range as the trend toward warmer and drier ramps up as the week progresses.

Monday and Tuesday both look to feature storm chances near 30% in Denver, with afternoon highs in the upper 80s to near 90°F both days. I can't say that any of the global models are all that excited about storms on either day, with the NAM showing the best potential for rain on Tuesday. There should be sufficient moisture around both days for at least some storm activity, and if the NAM is onto something Tuesday could be pretty active... so let us hope!

By Wednesday ridging moves back in and with it the heat. MOS guidance has highs back in the mid to upper 90s for Denver on Wednesday and Thursday, with perhaps a slightly cooler day and maybe better chance for storms on Friday.

Perhaps another cold front late next weekend, and continued monsoonal moisture feeding into the southwest this week keeping the hope alive –– this will be what gets us through the heat on the way this week. If you miss the rain today, at least enjoy the COOL down, and hope hope hope that the EURO is right as it keeps the moisture pushing over the next 15 days: 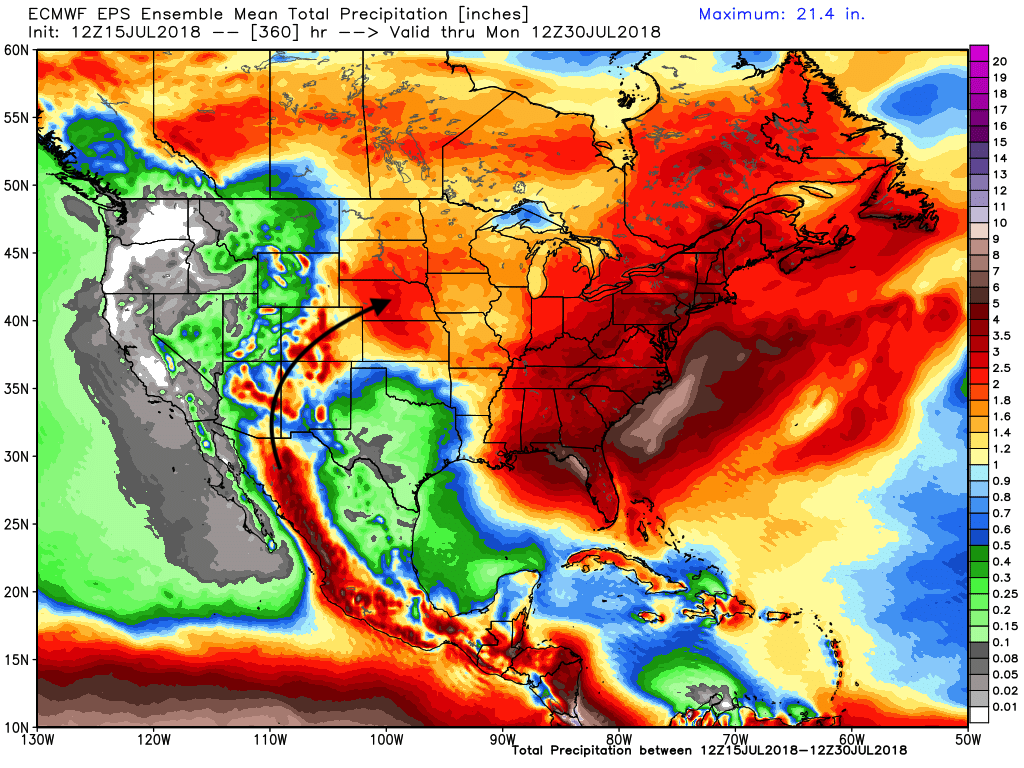