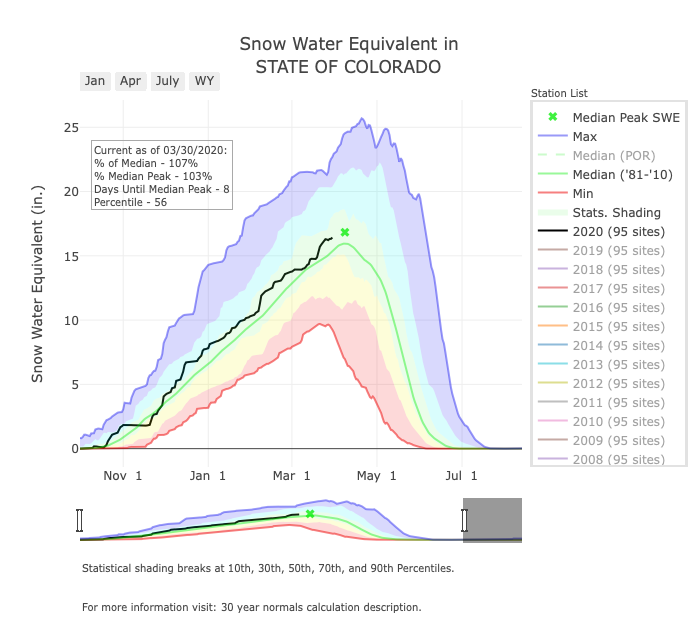 Two things are happening in our world right now. First, and most obvious, we are social distancing. We are told that we can’t go to restaurants or gatherings, but it's frequently recommended that we can still "go outside." Well, luckily, the other thing that is occurring is that we're in the spring season. The season of new growth, flowers budding, snow becoming rain, longer days, warmer days.

Climatologists refer to March 1 - May 31 as spring. But if you’ve lived in Colorado for more than 1 year, you know that spring here is a bit of sham. March is climatologically the snowiest month for many areas of the state, including Denver. April and May snows are definitely not uncommon either. But once we reach the end of March and enter April, the good news is that nice days do become more frequent.

It may surprise you to know that, up until today, the warmest day of the year for many parts of the state occurred way back on February 2!

Dozens of stations from Fort Collins, to Denver, to Colorado Springs, and out on the Eastern Plains reported temperatures in the 70s, while many mountain locations even enjoyed 50° temperatures. It's quite surprising that we haven't seen anything warmer all the way through March. But that will quickly change in these next couple of months.

Okay, so let’s assume we are going to be spending most of April and May social distancing, or limiting our interaction with others to some varying degree. It will certainly help to have some glorious weather that encourages us to be safely active outside. What’s typical for Colorado? How many "nice" days can we expect for this time of year?

Using NOAA’s 1981-2010 Normals, here is a map of Colorado showing the average number of days where the high temperature is greater than 70°F in April and May.

For a couple of high elevation locations, around Leadville and in Clear Creek County, they don’t typically have any 70° days. For most of the high elevations, they will have at least 1-5 "nice" days. Along the Front Range Urban Corridor, most locations get 25 to 35 nice days! In southeast CO and around the Arkansas valley (our state’s hot spot) they see 35 to 45 days above 70° on average.

Rest assured, as we stay at home and help that COVID-19 curve flatten, we will have plenty of days to enjoy being outside.

Let’s not forget though, that those snow days will likely still sneak in and bring us a few late season surprises, including the possibility of some snow later this week. In Fort Collins, for example, it has snowed 5 of the last 6 Mays. And how many times have we pondered planting the garden on Mother's Day, only to then have it snow on Mother's Day?

The map above shows the 1981-2010 NOAA Normal for number of days with snowfall greater than 1 inch in April and May. While a handful of stations around the state don't typically see an inch or more, the yellow stations typically see between 1 and 4 days of snowfall greater than 1 inch in the next month (and the other colors see even more snowfall days). If you're wondering whether climate change has played a part in decreasing these statistics, that's not as apparent in the spring months. While there does seem to be a decreasing average in fall snowfall (when's the last time it actually snowed in September?!), spring snowfall is still going strong in Colorado.

Now, if you're anything like me, you probably feel like you've seen more than your fair share of snow this year and are ready to be done with it!

But of course we still want to make sure the mountains have gotten their fair share and don't have drought concerns. Rest assured, according to the NRCS Colorado Snow Survey, our snowpack is in good condition. In fact, as of March 30, statewide snowpack has already passed the average peak, a week ahead of schedule!

In short - we probably aren't done with snow. But it's okay to root for those nice, mild days in between. And remember, while you're out there enjoying the nice weather, please practice social distancing. We are wishing good health to each of you and your loved ones.