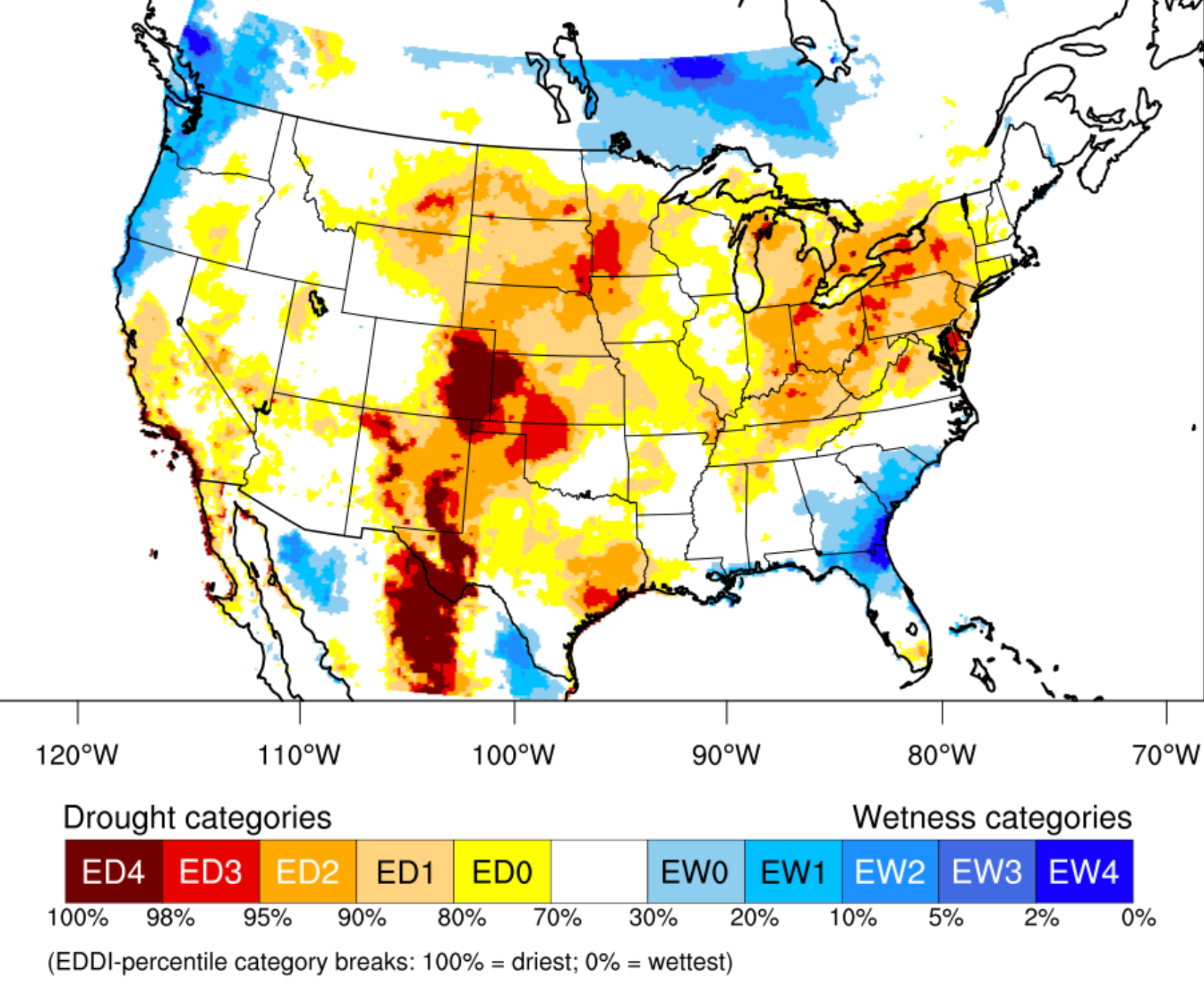 Have you heard the term "flash drought?" What exactly does that mean?

One of the more recent meteorological buzz-terms making the rounds is "flash drought." This is a relatively new term, even for meteorologists and climatologists.

Drought is one of the most unique natural hazards we deal with, partially due to its slow development and evolution. And, unlike other hazards, droughts are "measured" by the cumulative lack of something as opposed to actual measurements of variables. The official definition of drought has never been short or simple, and it can have very different means depending on where you live, what time of year it is, and what sector you're focusing on. But mostly, it can be narrowed down to a lack of available water, primarily lack of precipitation that we would normally expect in an area.

But now we're talking about a new type of drought. A flash drought. The concept of a flash drought began gaining traction as climatologists began observing drought events that were evolving significantly faster than a typical drought. Recent scientific literature has proposed to officially define flash drought based on the speed with which on-the-ground conditions are changing.

One possible definition is to assess the change in U.S. Drought Monitor categories over time. A deterioration of 2 or more categories in 1-2 months could indicate flash drought conditions. In the map below, we see areas of New Mexico, Oklahoma, Colorado, and Kansas that have experienced 2-3 category changes in the last 2 months.

But what can cause one drought to intensify faster than another drought? One of the fundamental differences in a flash drought is that it is not primarily driven by precipitation deficits. With precipitation, there's a limit to how large of a deficit you can have. If you're at zero inches, you can't have more of a deficit than that. There's no such thing as negative precipitation, right?! Well, no and yes. Strictly speaking, it's impossible to have a negative number precipitation total. But, you can have more evaporation. Precipitation takes moisture away from the atmosphere and adds it to the surface. Conversely, evaporation takes moisture away from the ground and adds it to the atmosphere –– so it's the opposite of precipitation. And the amount of moisture on the ground can be a much greater "reservoir" than what can be squeezed out of the atmosphere to make precipitation. So imagine you have little to no precipitation over an extended period of time. You could be in a drought. Now imagine moisture being taken away from the ground at the same time, and your drought could intensify much more quickly.

Evaporation is something that's always happening. For parts of the country with higher humidity, even though the ground has more moisture, evaporative losses are limited in the atmosphere because it's already "holding" more water vapor. In the more arid parts of the country, the drier air can definitely hold more, but the ground doesn't have as much to give. But for each region, there is an amount of evaporation that's considered normal. The below map estimates the amount of evaporative demand over a 1 week period. The colors denote how anomalously different the amount of evaporation is for each location. So, areas in yellows and reds are experiencing much higher evaporative demand than what is normal. This could be due to much warmer than average temperatures, low relative humidity, and/or higher winds.

Much of the central part of the country experienced much higher evaporative demand over the one week period ending June 12. Over the eastern plains of Colorado, evaporative demand was at extreme high levels. Impacts being reported at that time from local Farm Service Agencies were hot temperatures and incredibly high winds. Check out this tweet about wind anomalies across the Central U.S. Plains:

Combine hot temperatures and low relative humidity, and those blowing winds literally "strip" the moisture right out of the ground. The USDA monitors the percentage of every state's topsoils and publishes changes in short to very short (i.e. very dry) topsoil moisture.

The week ending June 14, Colorado saw a 12% increase in area of those dry soils, Kansas a 15% increase, and Nebraska a 16% increase. Over the last 2 weeks, Oklahoma has seen an incredible 46% increase in short to very short topsoils and Texas saw a 24% increase.

For much of this region, drought conditions have persisted since the spring. Lack of spring precipitation started this drought. But when the atmosphere comes in behind that and takes away the moisture that still remained in the ground, the drought significantly intensifies.

At the Colorado Climate Center, we maintain a suite of agricultural meteorological stations and observe daily evapotranspiration (moisture removed from irrigated crops). The below chart shows the daily ET at Idalia, CO in red, compared to the average in orange, for the first half of June. There was only one day, June 9, when the ET was less than average. And on June 7, the ET was 0.80", almost half an inch greater than average. At the bottom, you can see how that accumulates over time. So for 16 days in June, ET accumulation was 2 inches greater than average.

Consider that most of the plains have experienced a precipitation deficit of 2-4 inches since the beginning of spring. Add onto that a potential 2 additional inches lost from the soils (just in the last two weeks!), and you can see why "flash drought" is an appropriate description of the rapidly deteriorating conditions happening.

The unfortunate thing about flash droughts is that they might not leave as quickly as they came. In this case, it's served to make an already existing drought even more severe. In the case of 2012, it kicked off a drought that lingered for over a year for some areas. My best guess here is that what these areas have experienced over the past month is just one piece of a longer duration drought. We continue to expect warmer than average temperatures are more likely for the remainder of summer. And aside from very localized thunderstorms, it's unlikely the region will see widespread relief from precipitation for awhile. For many agricultural producers, the writing is already on the wall for this growing season. But we can hope, as we look to fall, that things will shift for a better season next year.