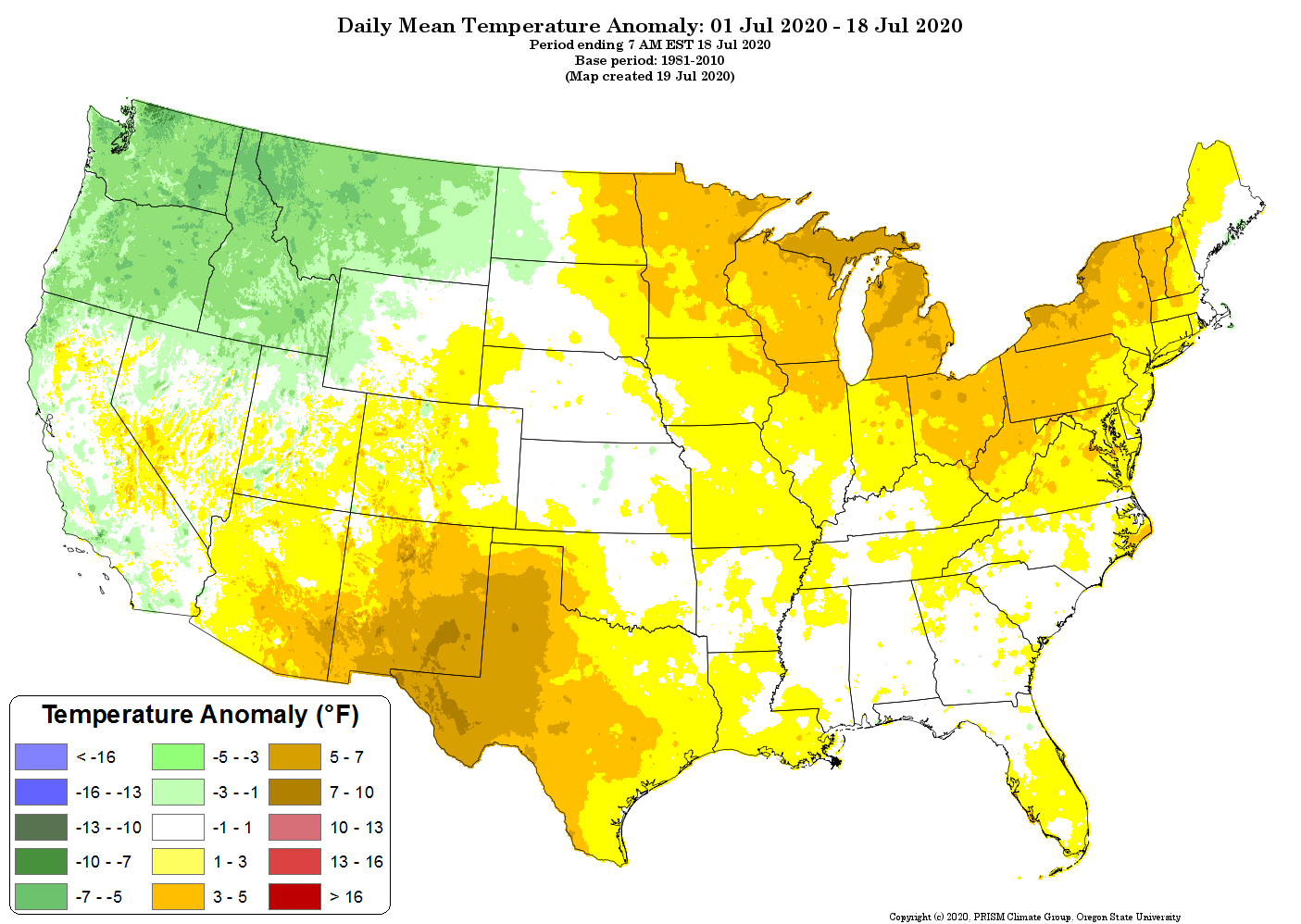 We're cruising through another month. Another hot and dry month.

To date, Denver's temperature for July 2020 is running 4.0°F above the longterm average for the month. Only three days this month have recorded highs cooler than 90°F, with Saturday coming in just shy of the 100°F mark at DIA, and hitting the century mark in Boulder!

While a boost in storm activity this coming week should help keep temperatures from pushing the century mark around here, it won't be exactly cool either. It's also not exactly clear how much moisture these storms will manage to deliver.

Still, we have temperatures in the 90s each of the next seven days for Denver, and upper 80s to low 90s for Colorado Springs for the same period which beats the upper 90s for both, but the forecast remains quite warm.

Over the next 3 days those storm chances shake out as the following for the Denver area. Even with the good probabilities today, it remains to see what will actually pan out. There's enough moisture and instability across Northeast Colorado today that we're likely to see a few severe storms develop through the afternoon, but it remains to be seen how much of that action will occur along the urban corridor vs east of our area. Storms that do manage to develop across the foothills early this afternoon will be capable to deliver at least some brief heavy rainfall to the cities, but the greatest severe threat will be east and northeast of the city.

The next couple of weeks will be quite interesting to watch. As we discussed with Insiders this week, there's some hope that we can tap into a bit more active storm track to end the month and start August, and now we're seeing hints of a late monsoon push in the modeling as well.

You all know we've been skeptical of the prospect of a good monsoon this year. At this point it's already late, and while we hope we can tap into that better moisture flow to end the month and start August, it'll take some work to reverse the deficit we are already in.

While models show that it's going to try, it's also by no means a done deal. The European model from yesterday showed a somewhat healthy look to things over the next 15 days, with above average moisture across the Four Corners states including a good bit of Colorado – a pretty classic monsoon look:

Today, for the same period, a much drier outlook for Colorado, with the moisture flow not quite making it far enough north:

The question is really going to be where the high ends up over the next few weeks. If it can stay far enough east as the Euro has been depicting quite a bit in recent runs (below) we'll have a fighting chance at a late monsoon, if instead that ends up further west... we may not get so lucky.

For its part, the GFS has shown a decent moisture flow for the mountains to end the month, but has kept the plains quite dry.

For our part we're a bit torn. We see the potential to both tap into a series of fronts that will be passing to our north. And we see a scenario that leads to a period of more a more active monsoon. However, the data is all over the place, and our overwhelming message so far this year has been our drought concern, which so far has unfortunately worked out. So, even with two signals for more moisture in the data, it seems like for many of us the safer forecast is to lean on the dry side.

Below is a look at precipitation probabilities over the next 10 days for the central mountains. Clear there will be storm chances each afternoon:

For the Denver/Boulder area those probabilities are much lower. This won't account of any day to day changes we may see (outflow boundaries etc that can change the storm outlook for a day on a dime), but does show we have plenty to overcome to have a wet next days.

Again, on any given day we could see a storm over produce locally and of course wipe these probabilities out of the water. But as a general look, these numbers are much more inline with the GFS and latest Euro than some of the wetter model runs we've seen of late.

It'll be important to just keep an eye on things as we head into the last part of July and start of August. If we see a more sustained monsoon look come on board we'll pass that along. For now, let's plan on a chance of storms each afternoon this week and hope they aren't all just high-based in nature, and instead can deliver some much needed moisture.