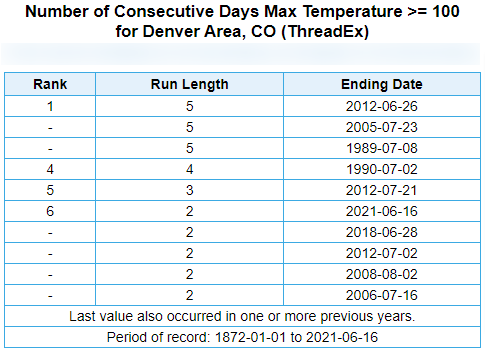 Going for three 100-degree days in a row in Denver

Tuesday and Wednesday both hit 100-degree heat and the city will make a run at it again Thursday.

Tuesday hit a high of 101. Wednesday hit 100. Both of those record setting highs.

The incredible heat recently isn't just isolated to Colorado. As we've discussed, the heat is an issue all across the Western US.

The streak definitely continues for the same areas. For the third day in a row, Denver makes a run at 100 for Thursday afternoon.

You can't really beat the heat anywhere in the state, even most mountain communities are near their record highs.

Denver and Colorado Springs are expected to hit record highs Thursday, as well as many other locations.

Shown here, the record highs to likely be set today:

For Denver, this is a notable streak of 100s. We've had as many as five 100-degree days in a row previously.

Looking beyond today, we have a slightly cooler outlook across the region Friday.

Perhaps your attention is grabbed by Monday's forecast. Rain chances will be increasing by that point, and a stronger surge will bring us a true heat-relief.

We will have more on the rain chances in a future post.